The #7 Acura Team Penske ARX-05c of Ricky Taylor and Helio Castroneves won in spectacular fashion, a Road America race that was plagued by torrential rain and lighting that enveloped the circuit. It’s the duos first win since Mid-Ohio in 2018.

With less than an hour to run, heavy rain caused multiple crashes and an eventual red flag that set up a 10-minute dash to the finish that saw the lead change in multiple classes.

Castroneves and Rengar Van Der Zande in the #10 Wayne Taylor Racing Cadillac DPi-V.R. were engaged in a fight for the win as more rain fell in the final minutes of the race. Van Der Zande, struggling for grip, drifted wide on the exit of the final turn and gave away the lead and eventual win to Castroneves.

Van Der Zande held on to secure second for himself and teammate Ryan Briscoe. The #10 Cadillac, like all of the Cadillacs this weekend, lacked the overall pace to compete in the dry. The strategists at Wayne Taylor Racing played the rain perfectly, though.

They delayed their final stop which allowed Van Der Zande to go straight to wets as opposed to the other DPi runners who needed to come back in for wets. That move vaulted the #10 Cadillac into contention for the win.

The #31 Whelen Engineering Cadillac DPi-V.R. of Pipo Derani and Felipe Nasr rounded out the podium. Derani was the first of many cars to slide off the track and into one of the various gravel traps when the rain came, but the red flag and chaos in the final minutes gave Derani a second chance.

For much of the race, the pair of Mazdas and the #7 Acura were engaged in a fantastic battle for the lead which often featured the three cars within one second of each other. The #55 Mazda RT-24P and the #77 Mazda RT-24P were both caught out by the rain, though.

The #77 Mazda of Oliver Jarvis and Tristan Nunez needed to pit from the lead to switch from slick to wet tyres as the race resumed from the red flag. They ended the race in sixth, with their teammates Harry Tincknell and Jonathon Bomarito coming home in fifth.

In GTLM, Corvette Racing secured a 1-2 finish with the #3 Corvette C8.R of Antonio Garcia and Jordan Taylor leading the way. The achievement was not without help from the rain, though, as multiple competitors in their class crashed in the tricky conditions. 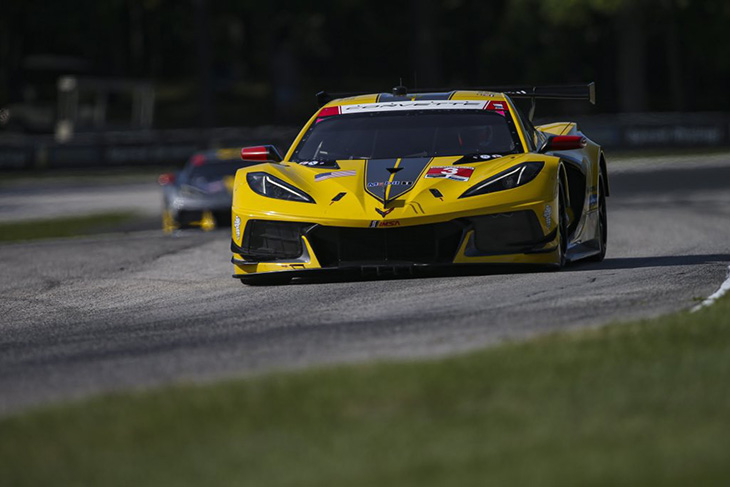 Like the race in DPi, the pass for the win came in the final ten-minute sprint to the finish, but as opposed to a side-by-side battle it was contact between the leading #911 Porsche 911 RSR of Nick Tandy and the chasing #24 BMW M8 of John Edwards that gifted Corvette the win.

Tandy and Edwards appeared to come together in the kink and both slide off the track. Edwards in the #24 BWM was able to recover from the spin, but the #911 Porsche of Tandy needed to be recovered. That incident led to the Full Course Yellow that ultimately ended the race.

The #4 Corvette C8.R of Tommy Milner and Oliver Gavin completed the Corvette 1-2. Amazingly, the #24 BMW, involved in the incident with the #911 Porsche was able to come home third, giving Edwards and Jesse Krohn an unlikely podium.

When the rain first came with just under one hour to run, the #912 Porsche 911 RSR of Earl Bamber and Laurens Vanthoor was leading the race. Bamber, on the run down to Turn 1, was caught out by the heavy rain and slide through the corner and into the gravel trap. The spin was one of many offs for cars who found themselves on slick tyres on a wet track. They finished the race in fifth.

The #25 BMW of Conor De Phillippi and Bruno Spengler ended the race in sixth.

The #12 Lexus RC-F GT3 of Townsend Bell and Frankie Montecalvo claimed the second-straight win for Lexus and capped off another dominating weekend for Lexus. 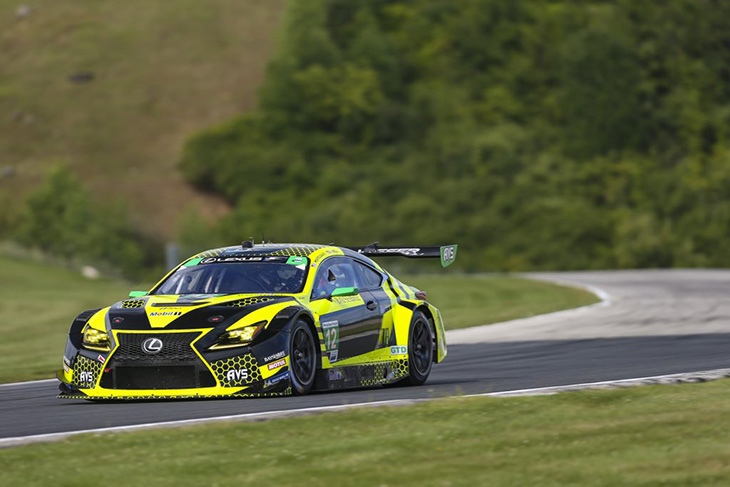 Lexus looked well on their way to an easy 1-2 finish in the dry, but as with the other classes, GTD was not spared from the drama. The late-race restart allowed the #86 Meyer Shank Racing Acura NSX GT3 of Mario Franbacher to challenge Bell for the lead of the race.

Farnbacher briefly passed Bell, but Bell fought back to retake the lead. It was not immediately clear how Bell re-took the lead as cameras did not show a pass but the timing sheets showed the Lexus in front when the Full Course Yellow that ended the race flew.

Farnbacher and teammate Matt McMurry did hang on to prevent a Lexus 1-2, though.

The #14 Lexus RC-F GT3 of Jack Hawksworth and Aaron Telitz ended the race in third. Telitz lead for much of the first half of the race but a slow in lap for the car’s second pitstop allowed their teammates to pass the for the lead of the race near the halfway mark.

In LMP2, the #81 DragonSpeed ORECA 07 of Henrik Hedman and Ben Hanley claimed the win. 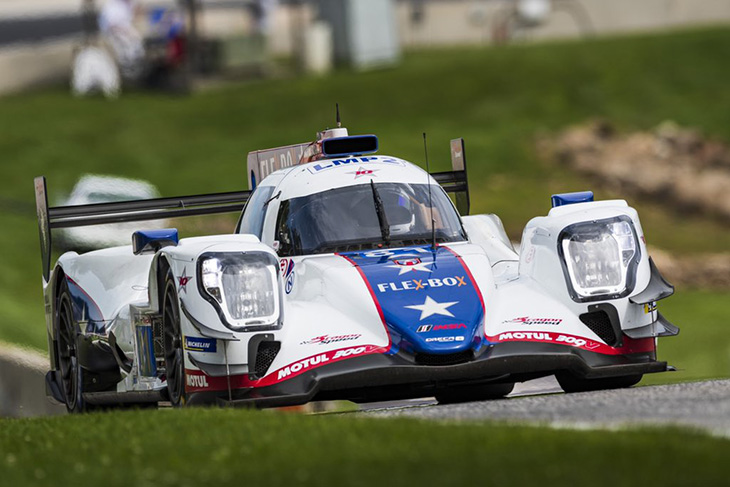 For much of the race, the #52 PR1/Mathiasen Motorsports ORECA 07 led the class. Scott Kelly had a stellar first stint that gave Simon Trummer a forty-second advantage on the class when he got in. But the rain also shook things up in LMP2.

Trummer, on the front straight and blinded by spray, slammed into the back of the #6 Acura Team Penske ARX-05c causing damage to both cars. Trummer and the #52 ORECA were given a penalty for the contact that caused them to drop to last in class.