There’s been a lot of discussion amongst Super GT fans since the series announced on Thursday that starting from the next round at Fuji Speedway on 9 August, all GT300 teams are required to change all four tyres during regular pit stops.

As a result, it is no longer possible for GT300 teams to do fuel-only and two-tyre pit stops when exchanging drivers, just as Saitama Toyopet GreenBrave did when they won the season-opening race on 19 July, gaining valuable track position by not changing tyres on their pit stop. The only exception is during wet-weather races.

The strategy had been viable for the JAF-GT300 and Mother Chassis vehicles for a number of years. They do not boast the high top speeds of the FIA GT3 cars, leaving them vulnerable to on-track overtaking. They also have much smaller fuel tanks and smaller fuel flow diameters on their rigs. So to compensate, JAF-GT300 and Mother Chassis runners have taken advantage of their comparatively lightweight vehicles and opted for alternate pit strategies – either changing just two tyres, or not changing tyres at all.

Tsuchiya Engineering used a no-tyre change stop to clinch the 2016 GT300 Championship at Twin Ring Motegi with their previous Toyota MC86, holding on to a championship-deciding victory with the time and track position they’d gained in the pits.

Other teams have attempted such strategies with their FIA GT3 cars. K2 R&D LEON Racing, for instance, elected to change left-side tyres only during the first race of the 2020 season and may have won if not for an issue getting the left-rear tyre on, and Goodsmile Racing & Team UKYO have also experimented with two-tyre and no-tyre stops many times in recent years.

Such a strategy requires a durable race tyre, and requires skilled drivers that can run competitive laps on a set of tyres that have already had several kilometres’ worth of wear. One other key component required, however, is that the tyre pressures must be set quite low for the race.

So when both Team JLOC Lamborghini Huracáns, the new Porsche 911 GT3-R of Hoppy Team Tsuchiya, and Team Mugen’s GT500 class Honda NSX-GT all suffered punctures during the race, it obviously caught the attention of the GT Association as a potential safety risk. It seemed at the time to be an issue with their tyre manufacturer as they were all supplied by Yokohama – but looking back, these teams may very well have been attempting to go the whole race on one set of tyres, running dangerously low tyre pressures that put them at risk of a puncture.

And a tyre failure always causes a risk of a serious accident depending on where the failure happens.
So after gaining the approval of the teams and tyre manufacturers, the decision was made to make four-tyre stops mandatory for the foreseeable future on the grounds of safety. 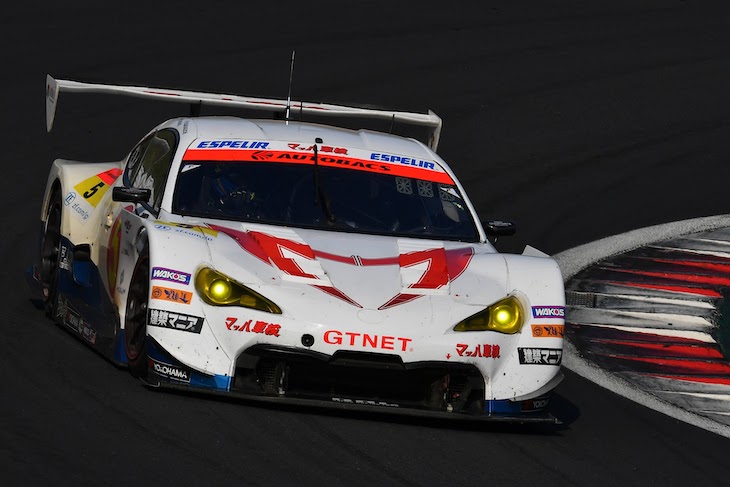 Of course, the decision wasn’t popular amongst every team in the paddock either. Perhaps the strongest voice of frustration so far has been from former driver Tetsuji Tamanaka, the team director and chief engineer for Team Mach – whose Toyota MC86 also elected to not change tyres on their pit stop, and drove on to a third-place finish for their second podium finish in two seasons.

Voicing his views on social media, Tamanaka said, “I’m surprised at this regulation change a week before the race. I’ve never heard of a last-minute change like this in any race in the world.”

Tamanaka-san also shed some light on another major change that was made during the massively altered 2020 season. “We had to decide a month in advance which tyres we would use for this race because of the tyre manufacturer’s manufacturing commitments, and that’s a big problem for the teams who have chosen to use hard tyres because they’d committed to a no-tyre exchange strategy.”

“If it had been decided before the season started it would have been fine, but this last-minute change takes away the strategy for the teams and it also takes away the fun and excitement for the spectators. What race fans want is unpredictability, the bigger the battles, the more interesting the race. Is it fun to watch a fast car just run the top of the pack, change all the tires, get back on the track at the top and finish at the top? It’s a race for the fans – and I’m a fan of racing too, but it’s not fun at all to be able to predict which car will win before the race has even started.”

To offset the time loss from having to take four tyres to comply with the regulations, JAF-GT300 cars like the Subaru BRZ, Toyota Prius, and Toyota GR Supra are now exempt from requiring the 27.5mm fuel flow restrictor on their refuelling rigs. And the Mother Chassis cars now have a larger fuel flow restrictor for themselves – up from the previous 27.5mm to a 31.2mm diameter that’s comparable with a GT3 car like the Audi R8, Lamborghini Huracán, and Porsche 911 GT3-R. 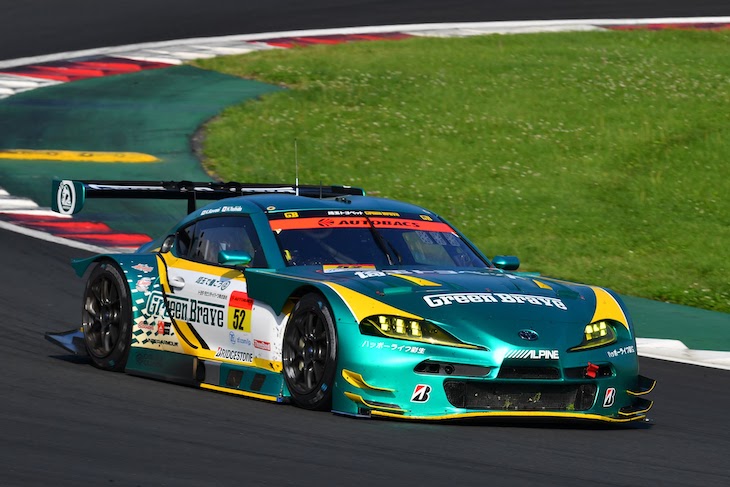 The new pit work rules could have the biggest impact on our newest race winners at Saitama Toyopet GreenBrave, who now have realistic ambitions of competing for the championship in 2020. Their team is staffed by a crew of mechanics who work full-time as shop mechanics in Toyopet dealerships, not by mechanics with full-time racing backgrounds. GreenBrave spent all of pre-season testing, before and after the extended COVID-19 hiatus, focusing on long-run race simulations with the goal of being able to run as many races as they could on just one set of harder-compound Bridgestone Potenza tyres, and as Tamanaka-san explained, those tyre compounds would have been selected one month in advance.

The concern going forward may be less about how the GreenBrave GR Supra can perform next weekend with a 60 kilogramme Success Ballast handicap, but rather, if their crew of humble shop mechanics have gotten enough practice changing tyres in race conditions after going into the season preparing not to do so on a regular basis.

Then again, Saitama Toyopet GreenBrave have built a team that seems as if it is strong and resourceful enough to adapt to the challenge – just as they did when they asked fellow JAF-GT300 entrants apr Racing to aid them in the design and construction of their all-new V8-powered GT300 Supra this offseason.

This wouldn’t be the first controversial new rule from the GTA in recent years. The closed pit lane rule during Safety Car interventions has been a hot button topic since it was put into place following 2015’s infamous pit lane traffic jam at Sugo. It’s especially discussed after a race where the results have swung wildly based on a Safety Car coming out during a pit window, as it did last September in Autopolis, and as it did last August during the Fuji 500 Miles. Only in 2020 were the regulations relaxed somewhat to allow for the race director to open the pit lane under a safety car for emergency service.

One thing we won’t know yet is if this rule change will still be in effect by the next time an endurance race like the Fuji 500 Miles returns to the Super GT calendar, be it in 2021 or 2022.

The 2019 Fuji 500 Miles had a mandatory four pit stops with driver changes, and we saw last year Team JLOC’s race-winning #87 car seize the GT300 class victory with a bold strategy that saw them take their first and second stops in back-to-back laps to turn it into an effective three-stop race. That same race, the aforementioned Saitama Toyopet GreenBrave, then competing with their Toyota Mark X MC, double-stinted their first set of tyres and triple-stinted their second set to minimize time in the pits and take a then-best second-place finish. Now such a strategy would be outside the regulations as it stands.

From the fan’s perspective, making this change to the pitwork rules is wholly understandable on safety grounds. But losing this element of strategic variance and “risk versus reward” is still lamentable from an entertainment perspective. And I’d imagine there will be a lot of fans eager to hear from GTA Chairman Masaaki Bandoh when he addresses the media at his pre-race press conference on Sunday.