On his second-to-last lap in the one-hour practice session, Meloni managed to improve the fastest time at that moment, set early in the session by Gabriele Piana. Nabuurs put in the second-fastest time in the last minutes of the session.

It was the first time this season that the #111 RN Vision STS Racing BMW wasn’t the leading Silver Cup entry at the end of an official session this season.

Fourth on track and third in Silver was the #15 NM Racing Team Mercedes-AMG of Lluc Ibanez, with Valentin Hasse-Clot putting his AGS Events Aston Martin Vantage in fifth place overall on the Italian circuit.

Joël Camathias was the fastest driver in the Pro-Am class. The Swiss driver lapped the 4.226-kilometre Misano circuit in a time of 1m43.078s. Nicolaj Møller-Madsen was second fastest at 0.181s, despite having to serve a five-minute stop-and-go for exceeding track limits.

Sixteen of the nineteen cars entered this weekend finished the first session within two seconds of each other. The second practice session will take place later today, with the lights set to go green at 16.30 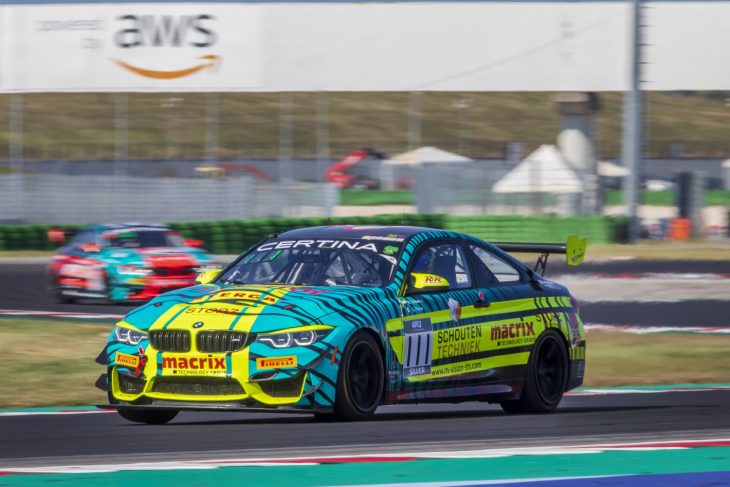 The Dutchman in the #17 V8 Racing Chevrolet Camaro GT4.R was the first into the 1m41s this afternoon, before Piana put in his fastest time around the halfway mark of the practice session.

In the final minutes of the session, Nabuurs and NM Racing Team’s Lluc Ibanez improved their times, but both drivers were unable to match Piana’s time and finished second and third respectively, both overall and in the Silver Cup.

Valentin Hasse-Clot in the #27 AGS Events Aston Martin made it a overall and Silver Cup top four. Behind the French driver, Allied-Racing took the first two positions in Pro-Am, with the Porsche 718 Cayman GT4 CS MR of Jörg Viebahn and Nicolaj Møller-Madsen beating that of teammates Bastian Buus and Jan Kasperlik by just 0.042s. A late fast lap for Kay van Berlo put the #30 Selleslagh Racing Team Mercedes-AMG in seventh place overall and third in Pro-Am.

Behind the #110 RN Vision STS BMW and #8 CMR Toyota in eighth and ninth overall, it was the #89 AGS Events Aston Martin Vantage in tenth place. With Gilles Vannelet behind the wheel of the Aston Martin, the French squad set the pace in the Am class in Free Practice 2, edging out W&D Racing Team by just 0.138s. Bob Herber finished in third place in the #31 Mercedes-AMG, 0.033s clear of Selleslagh Racing Team teammates Johan Vannerum and Jean-Luc Behets.

The GT4 European Series will return to action at 10.30 this morning with qualifying. Race 1 will take place later in the day, at 16.30.