Cool Racing took their first Michelin Le Mans Cup win in dominant fashion at a scorching hot Spa Francorchamps with a run that could not have been more of a contrast from the season opener at Paul Ricard.

Starting from pole position Nicolas Maulini pulled out a significant lead in the #37 Ligier JS P320 that left the chasing pack struggling to hang on.

50 minutes in and the cars began to take their main pit-stop (all LMP3 cars again being mandated a late-race splash and dash due to the excessive fuel consumption o the new LMP3 engines), including the driver change, Maulini pitting with an impressive 28-second advantage, quite the contrast from the farcical accident that eliminated the already delayed #37 at Paul Ricard, Maulini T-boned by Parrow in the Rinaldi Duqueine.

It would not though be totally straightforward, there was a problem in the pits and the car lost over 20 seconds to its major competitors before Cauhaupe could rejoin, with the #26 Graff Ligier, now in the hands of Kaiser, within a handful of seconds of the lead.

Cauhaupe though got his head down and pushed on, leaving Kaiser to fall back into the clutches of a rapidly closing pack.

That saw the chasers compressing the gaps not only to the leader but also between themselves with Laurents Hörr in the #3 DKR Duqueine, Colin Noble in the #7 Nielsen D08 and Wayne Boyd in the #23 United Ligier coming back from significant deficits to all finally get by the Graff car, Hörr finishing the race 24 seconds back from the Cool Racing car, with Noble closing in fast at the end, 9 seconds back, and by then under real threat from Boyd who finished 3.6 seconds off the podium.

GT, with a reduced entry this weekend, suffered further woes before the race even started with Claudio Schiavoni clashing with Michael Broniszewski on the Kemmel straight as the cars came to the grid, the #77 Iron Lynx Ferrari hitting the barrier very hard indeed, out on the spot as the driver walked away, thankfully unhurt, looking for clues as to what had happened! 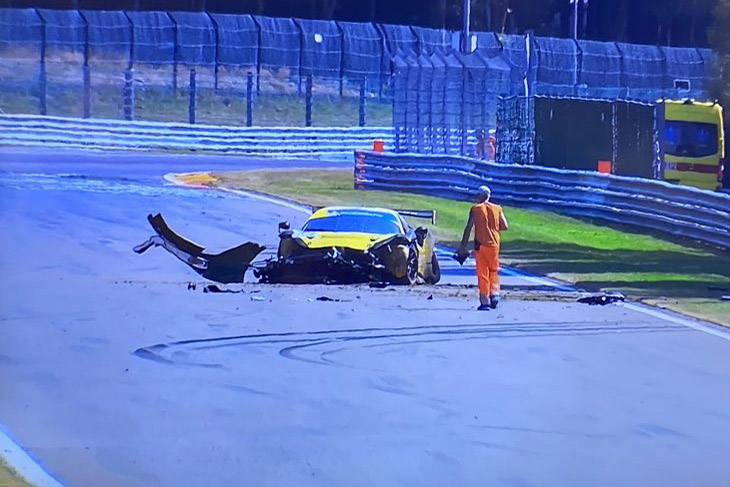 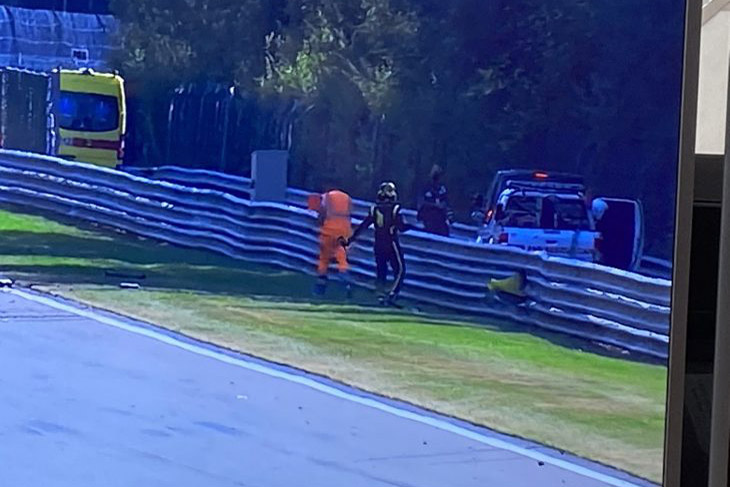 A combination of the Kessel man trying to go by to take up his grid position, and the Iron Lynx car weaving hard to warm Michelin rubber had conspired to create a perfect storm, the #74 requiring a little attention on the grid, the #77 requiring a skip.

That left five starters but we’d lose anther, and another Iron Lynx car at that at half distance, Michelle Gatting starting the #9 after the team were not permitted to start co-driver Deborah Mayer, having qualified outside 110% of the pole.

Iron Lynx were none too keen to talk post-race, Mayer making it clear that the Series TV camera was unwelcome in the garage, we’ll say for now that the #9 did not emerge from the mandatory pitstop but with no visual reason why. (Apparently, it was gearbox-related).

There was a further drama in the race for yet another Ferrari, this time the #50 Kessel car of John Hartshorne, the Englishman suffering contact from the #24 United Autosports Ligier of Daniel Schneider in the first half of the race at the Bus Stop as the Brazilian looked to lap the Ferrari.

The attempted move was clumsy at best and left both cars with damage, Hartshorne able to gt into the pit entry for attention, Schneider unable to do so and eventually pulling off at Les Combes into retirement with broken rear suspension.  ll of that left a two-car battle for the GT class win, Giacomo Piccini fending off the close attentions of a charging David Perel in the last 20 minutes.

Perel was pushing hard, too hard, with track limits warnings mounting up as he got onto the til of the #8 in his #74 488.

Piccini too had received a final warning for track limits but the pair were both on the limit, the Iron Lynx car also carrying a reported gearbox issue.  Having had the black and white warning flag, and still pushing Eduardo Freitas’ patience, Perel was looking for a way by, and he found it in the dang minutes at La Source, up the inside, Piccini though had that covered and took his ideal wide line tucking back underneath and powering by again to lead through Eau Rouge.

Coming to start the final lap through the Bus Stop Perel finally pounced, just as the screens lit up with the message that he had been reported to the Stewards for track limits violations, at around the same moment there was significant contact, the Iron Lynx car turned around, the Kessel car through to the lead, but with another message flashing up almost immediately the incident was under investigation. 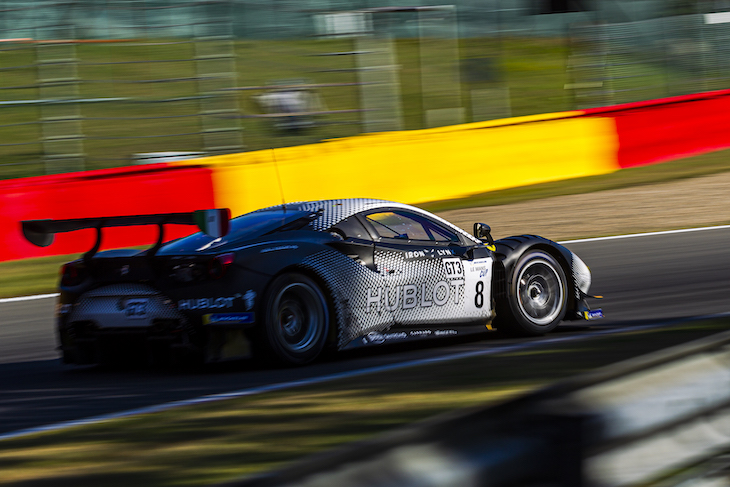 That didn’t take long, and before the lap was completed the new leader was dealt a drive-through, Piccini having rejoined and sitting just a few seconds back, that would be converted to a 30 second time penalty, the win correctly back o Mastronardi, who had dominated the opening half of the race, and Piccini. Perel and partner Broniszewski would be confirmed in second with the #67 Kessel car of Murod Sultanov and Paulo Ruberti completing the class podium.