Race 2 at Hungaroring saw another maiden win in the International GT Open with a convincing victory taken by Louis Prette and Vincent Abril in the AF Corse APM Monaco Ferrari 488.

After the duo hit bad luck on Saturday, the Monegasque pair, managed by Stéphane Ortelli, had a faultless race, winning ahead of Fabian Schiller-‘Max’ (GetSpeed Performance Mercedes), who took first in Pro-Am, and Salih Yoluç-Charlie Eastwood (TF Sport Aston Martin Vantage), with Schiller and Yoluç having a very entertaining duel in the closing phases.

Hahn-Khodair (TMM McLaren) repeated their second from yesterday in Pro-Am, ahead of Sattler-Bastian (HTP Winward Mercedes), while in Am, Florian Scholze-Jens Liebhauser gave GetSpeed Performance a second win of the weekend, preceding Niki Leutwiler (PZ Ob. Zürichsee by TFT Porsche) and the ARC Bratislava Lamborghini of Miro Konopka-Zdeno Mikulasko. 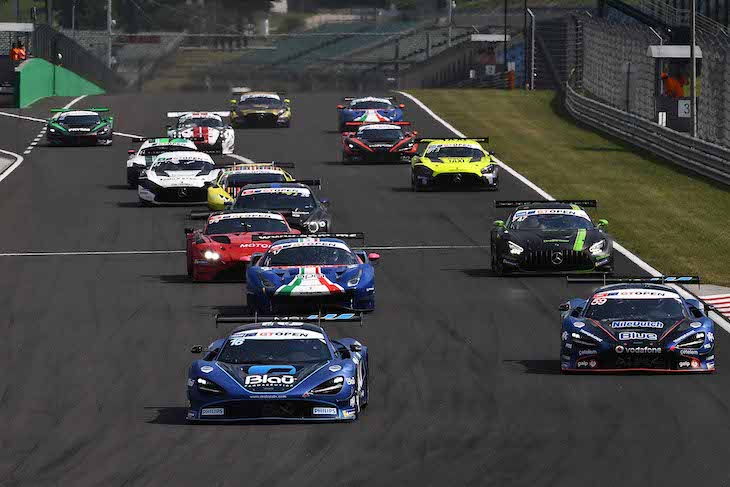 At the start, Khodair kept his pole advantage ahead of the second Two Martin McLaren of Chaves, then Abril, Eastwood, Bastian, Crestani and Mikulasko.

The first laps were relatively quiet, but it is worth noting for later in the season that Saturday winner Krupinski climbed back to 10th from last in the grid, after the JP Mercedes suffered from over-heating in Q2.

By lap 10 the top-5 (Khodair, Chaves, Abril, Eastwood and Bastian) were still covered by only six seconds. In 7th overall, Mikulasko kept the lead of the Am class ahead of Liebhauser.

The window for driver change opened on lap 14, with Crestani being the first to stop.

After all changes, Louis Prette quickly took the lead and built a 7-second advantage on Yoluç, who was followed by Hahn, Ramos, Schiller, Sattler and Mettler, with the first seven covered by 16 seconds.

The following laps showed a great show from Schiller, who passed Ramos in lap 27 and then Hahn (lap 30) while Prette built a 10 second advantage on Yoluç.

Schiller seemed unstoppable and eventually took second from Yoluç on the last lap after a very close fight. In Am, Scholze won ahead of Leutwiler and Mikulasko.