The 2020 International GT Open kicked-off with a huge surprise: on a very hot Saturday at the Hungaroring, Polish outfit JP Motorsport, on their debut both in the series and at this level of competition, won Race 1 with former F.1 and LMP1 man Christian Klien and Polish rookie Patryk Krupinski, who is only at his second season of racing and was debuting in GT3.

The Mercedes AMG of the team managed by Günter Aberer certainly benefitted from a bit of luck but the achievement remains stunning, even if the team prepared and tested extensively during the long break. 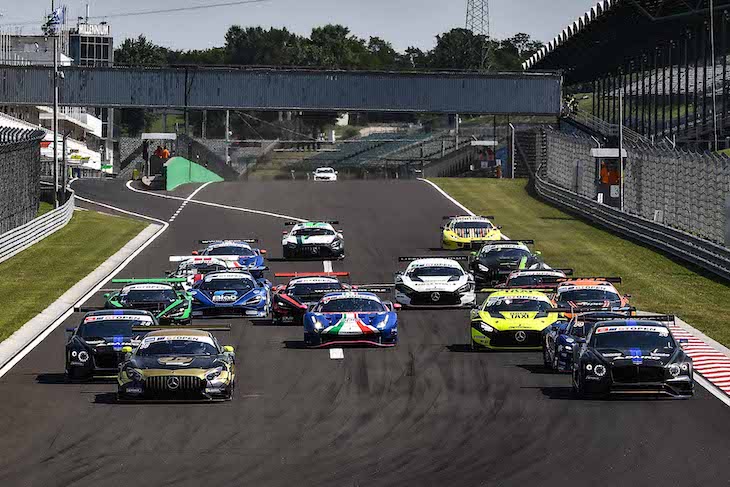 Klien had taken pole position and led throughout the first stint before a safety-car period annihilated the advantage with which Krupinski started the final phase. There would though be a second neutralization on the closing lap, with the race ending behind the safety-car, and JP Motorsport hardly believing what had happened: “It’s incredible!”, was the only thing the team members could say.

In Am, the GetSpeed Mercedes of Florian Scholze and Jens Liebhauser took a clear victory, ahead of Niki Leutwiler (PZ Ob. Zürichsee TFT Porsche) and the AKM Mercedes of Alex Moiseev-Alexey Nesov.

At the start, Christian Klien kept his pole advantage narrowly, but Stefano Coletti made the jump to second from 7th on the grid after 2 corners ahead of team mate Mettler with Ramos, Hahn, Millroy and Schiller behind.  Schiller too was on a charge, up to third by lap 6, attacking Coletti for second.

In the meantime, the AF Corse APM Ferrari of Louis Prette and the Optimum McLaren of Pickford, and Scholze and Lisowiski (who had moved to the Olimp Racing Mercedes #5 after Marcin Jedlinski suffered a big shunt in qualifying in the #77) were all in early trouble.

On lap 9, Schiller looked up the inside of Coletti but touched the Bentley, sending it into a spin.

In the meantime, Klien’s advantage was up to 8 seconds ahead of Schiller, with Mettler in third, then Ramos and Millroy, who had passed Hahn, Yoluc, Lisowski and Leutwiler, who led in Am.

After all of the stops were completed, on lap 24, Krupinski led by 15 seconds from Chaves, then Crestani, Khodair, Iribe, Eastwood, and ‘Max’, but on lap 29, Umbrarescu ended up in the gravel after losing the car on a kerb, prompting the safety car out, which wiped out the gaps.

Shortly after restart (lap 29), with the cars running in a compact group, the Olimp Racing Mercedes of Stanislaw Jedlinski, probably after a contact, hit the barriers hard at turn 4, getting airborne, but fortunately landing on its wheels and with the driver unhurt.

The subsequent safety-car took the field to the finish.