The Porsche duo not only chalked up the first win of the season for the 911 GT3 R but also a maiden victory for Munich-based outfit SSR Performance. 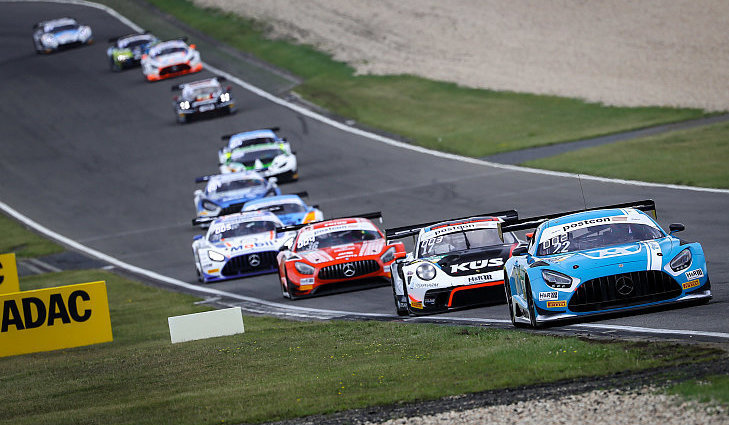 The third and final spot on the podium was secured on the final lap by the Rutronik Racing Audi of last year’s champions Patric Niederhauser and Kelvin van der Linde in the best of the large R8 LMS contingent.

“What an amazing day,” said a jubilant Michael Ammermüller. “First the pole position and now the victory. The team gave us a perfect car today.”

The eventual winners dominated Saturday’s race at the Nürburgring right from the start. Pole-sitter Ammermüller resolutely defended his lead to emerge from the first lap just ahead of Maro Engel. Even in the early stages of the one-hour race, the two front-runners maintained a comfortable gap on the pack hunting them down. The SSR Performance Porsche and Toksport WRT’s Mercedes-AMG stayed well ahead despite a short safety car deployment to recover the T3-HRT-Motorsport Bentley of Constantin Schöll and Jordan Pepper.

The mandatory pit stops in the middle of the race did nothing to change the running order, as Ammermüller’s co-driver Christian Engelhart returned to the track ahead of Engel’s partner Luca Stolz and subsequently gave him no real opportunity to attack. The third-placed car was almost 15 seconds behind the two leaders when the safety car came out for a second time in the final quarter of the race following an incident involving the Aust Motorsport Audi of Rahel Frey and Hendrik von Danwitz.

At the chequered flag, Engelhart had a 0.7-second lead as he secured a maiden win for SSR Performance on only their fifth ADAC GT Masters race. For Engelhart, who was championship runner-up in 2019, this was race win number 13 and team-mate Ammermüller’s third. Maro Engel and Luca Stolz finished as runners-up, having secured a podium in each of the three races so far contested in 2020. As a result, they keep their lead in the standings – a real bonus for Toksport WRT on their home track.

Reigning champions Patric Niederhauser and Kelvin van der Linde staged a series of spectacular overtaking moves over the final stages of the race to secure a first podium of the season. South Africa’s van der Linde took over the R8 LMS in eighth place and fought his way forward during the course of his stint. He managed to clinch a podium spot on the very last lap at the expense of Porsche works driver Simona De Silvestro who narrowly missed out on a first Top Three finish with Klaus Bachler in their Küs Team75 Bernhard 911 GT3R, she crossed the finish line in fourth place with a deficit of just 0.9 seconds. Zakspeed BKK Mobil Oil Racing pairing Mick Wishofer and Dorian Boccolacci came fifth in their team’s home race, a result that was enough for Wishofer to win the Pirelli Junior classification for the under-25s.

Philip Ellis and Raffaele Marciello in the Knaus-Team HTP-Winward Mercedes-AMG took P6 ahead of the Precote Herberth Motorsport Porsche of Robert Renauer and Sven Müller.

Lamborghini works drivers Franck Perera and Albert Costa Balboa for GRT Grasser Racing Team ultimately had to settle for tenth place: they had originally crossed the finish line in P5 but were handed a retrospective five-second penalty for pushing another car.

Michael Ammermüller (SSR Performance, Porsche 911 GT3 R): “It was important to start from pole position and to exploit that to the full. We managed to do this and retained the lead. The team gave us a perfect car, and we avoided making any mistakes.”

Christian Engelhart (SSR Performance, Porsche 911 GT3 R): “Michael already put in a magnificent performance in qualifying. The race was not as straightforward as it may have looked. The Mercedes put us under constant pressure from behind. I didn’t get any opportunity to ease off and had to keep pushing all the time. I couldn’t afford to make any mistakes. While I was following the safety car, I was getting a lot of pickup, but at the restart, I managed a very good lap. I was very happy about that. But I was even happier when the race was over.”

Porsche triumphed again in the second race of the weekend courtesy of Robert Renauer and Sven Müller in their Precote Herberth Motorsport, their first win of the season. 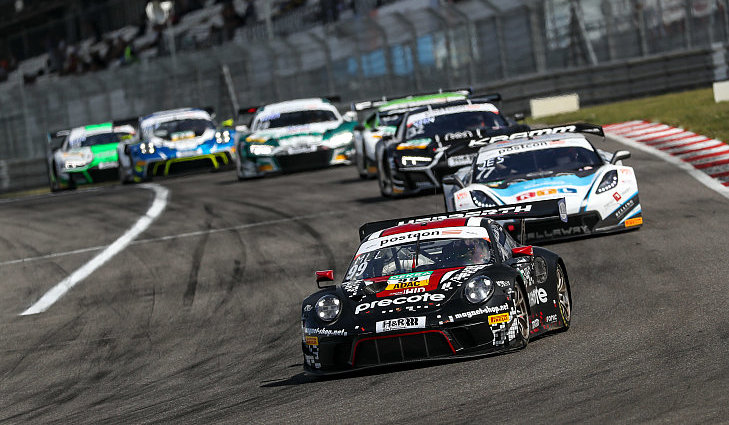 Second place went to Charles Weerts and Dries Vanthoor in their Team WRT Audi R8 LMS ahead of Lamborghini works drivers Franck Perera and (Albert Costa Balboa in their GRT Grasser Racing Team Huracan GT3 Evo. “What a great victory,” said a delighted Robert Renauer. “That was some small recompense for our unfortunate season opener at the Lausitzring.”

Müller and Renauer laid the foundations for victory with a strong start. Müller improved from fifth to third, and for the whole of the first stint was behind fellow Porsche driver David Jahn, who had gone into P1 from sixth on the grid. Jahn defended his lead against pole-sitter Kelvin van der Linde and third-placed Müller until the round of pit stops. Van der Linde was the first in the top group to complete his stop, handing the car over to partner Patric Niederhauser. By virtue of having come in early, the two defending champions took P1 as the pit stop window closed, but only briefly. A subsequent drive-through penalty for a pit lane infringement dropped the Audi pairing way down the field. They had to settle for tenth place in the end, despite having posted the fastest lap of the race.

Müller’s partner Renauer was the new race leader after undercutting fellow Porsche drivers Jahn and Fittje with a better pit stop strategy. Renauer then pulled away and eventually achieved a first win of the season by a margin of 3.7 seconds. For both him and his team, Precote Herberth Motorsport, this was win number seven in the ADAC GT Masters and the second for Porsche works driver Müller.

David Jahn and Jannes Fittje took the chequered flag in second, but a retrospective 30-second penalty for an unsafe release after their pit stop dropped them out of the points. Charles Weerts and Dries Vanthoor were elevated to the runner-up spot.

This was the second podium of the year for the Audi pairing after they won Race 2 at the season opener. The result was more than enough for Weerts to secure victory in the Pirelli Junior classification.

Making their first podium appearance of the 2020 campaign were third-placed Franck Perera and Albert Costa Balboa in their GRT Grasser Racing Team Lamborghini).

Team WRT pair Rolf Ineichen and Mirko Bortolotti in another Audi missed out on the champagne in fourth place, but Ineichen had the consolation of winning the Pirelli Trophy class.

Maro Engel and Luca Stolz in the Toksport WRT Mercedes-AMG GT3 Evo defended their championship lead but missed out on the podium for the first time in 2020. Also in a Mercedes, Philip Ellis and Raffaele Marciello for Knaus-Team HTP-Winward took P8 ahead of the GRT Grasser Racing TeamLamborghini Huracán GT3 Evo of Steijn Schothorst and Tim Zimmermann.

Robert Renauer (Precote Herberth Motorsport, Porsche 911 GT3 R): “To be honest, my race today was relatively unspectacular. I took over from Sven in P1 and was then able to defend my position. This second generation of the Porsche 911 GT3 R obviously goes extremely well here at the Nürburgring. The car felt really smooth, and our pace was good throughout. Also, the fact that we were able to clinch victory today after our bad luck at the Lausitzring has put things right to some extent and we’re very happy about that.”

Sven Müller (Precote Herberth Motorsport, Porsche 911 GT3 R): “After we had all come round the last corner of the formation lap quite quickly, the start was somewhat chaotic. We got through OK, gaining two positions straight away. As the race progressed, we found it difficult to get past the Audi of Kelvin van der Linde and the Porsche driven by David Jahn, but you could say that we then got lucky to some extent. After our miserable start to the season at the Lausitzring, we are of course very happy with our win here!”