The third round of the 2020 Autobacs Super GT Series brings us to the historic Suzuka Circuit, site of the Fujimaki Group Suzuka GT 300km Race.

Sunday’s 52-lap race will be broadcast internationally via The Race YouTube, with Sam Collins and Leigh O’Gorman calling the action from lights to flag.

But of course, in order to race at the legendary 5.8 km figure-eight circuit in central Japan, one must first qualify. Saturday was a sunny, blisteringly warm day, with heatwave advisories going out all over the region, it was 33°C by the time qualifying began.

Track temperatures shot up to 48°C by the time Q1 got underway at 14:30 JST. GT300 was once again split into two groups of 15, with the fastest eight cars out of each group advancing into Q2.

Group A was led by the #31 Toyota GR Sport Prius PHV apr GT of Yuhki Nakayama, setting a 1’58.621. The #52 Saitama Toyopet GreenBrave Toyota GR Supra of Kohta Kawaai made it through with a P6 effort, despite the championship leaders carrying 75 kilogrammes of Success Ballast on board this weekend. In Group B, Hironobu Yasuda was quickest in the #11 Gainer TanaX Nissan GT-R GT3, setting a 1’58.911, but rookie Atsushi Miyake wasn’t far behind in the #244 Takanoko-no-yu Lexus RC F GT3 in 2nd.

Takuto Iguchi missed out on Q2 by less than a tenth of a second after losing time in the final sector, so he and Hideki Yamauchi will start 18th in the #61 Subaru BRZ R&D Sport. The #4 Goodsmile Hatsune Miku Mercedes-AMG GT3 (Nobuteru Taniguchi/Tatsuya Kataoka, 20th) and the #25 Hoppy Porsche 911 GT3-R (Takamitsu Matsui/Kimiya Sato, 22nd) were the other notables eliminated after Q1 in Group A.

It looked as if the #65 LEON Pyramid AMG of Togo Suganami was bumped out of Q2 at the last minute, but after the session, the quickest lap time of Yusaku Shibata in the #360 RunUp GT-R was deleted when Shibata went all four wheels off at the exit of Spoon Curve. That took the RunUp GT-R from 3rd down to 12th in the session, well below the cut line, and put the LEON AMG back into the Q2 pack of 16. The RunUp GT-R will now start 23rd, joining some other notables, like the #5 Mach Syaken GTNET MC86 (Natsu Sakaguchi/Yuya Hiraki) down in 17th and the #9 Pacific NAC D’station Aston Martin Vantage GT3 (Tomonobu Fujii/Kei Cozzolino) in 21st.

Track temperatures had now broken 50 degrees centigrade by the time the GT500 cars began to run in Q1. After a few minutes of waiting, the field of 15 cars set out to fight for just 8 starting places. 26-year-old GT500 newcomer Hiroki Otsu, making just his third top-flight appearance, continued where Izawa left off in practice, and led the session with a 1’46.160 in the #64 Modulo NSX.

The #39 Denso Kobelco SARD Toyota GR Supra (Heikki Kovalainen/Yuichi Nakayama, 9th) just missed the cut and, therefore, a chance for Kovalainen to do a time attack in his Super GT return. Both TOM’s cars, the #37 KeePer TOM’s Supra (Ryo Hirakawa/Nick Cassidy, 11th) and the #36 au TOM’s Supra (Yuhi Sekiguchi/Sacha Fenestraz, 12th) each missed out, both cars carrying the “Stage 1” fuel flow restrictors that are limiting their fuel burn and horsepower. The big surprises, though, were two cars tipped to succeed this weekend: The #8 ARTA NSX-GT (Tomoki Nojiri/Nirei Fukuzumi) and the #12 Calsonic Impul GT-R (Daiki Sasaki/Kazuki Hiramine) down in 14th and 15th respectively.

Four Hondas, three Toyotas, and one Nissan made it into Q2, and all four tyre manufacturers were represented.

First was the battle for the GT300 class pole position. With his new cherry red hair (a choice this writer can certainly respect!) Koki Saga took the #31 Toyota Prius to provisional P1 with a best lap of 1’58.189. But João Paulo de Oliveira was setting purple sector times behind him, in the #56 Realize/Nissan Automobile Technical College GT-R. And with less than two minutes left to run, Oliveira saved his best lap for last, a 1’58.059 – with fastest sectors 2, 3, and 4 along the way! 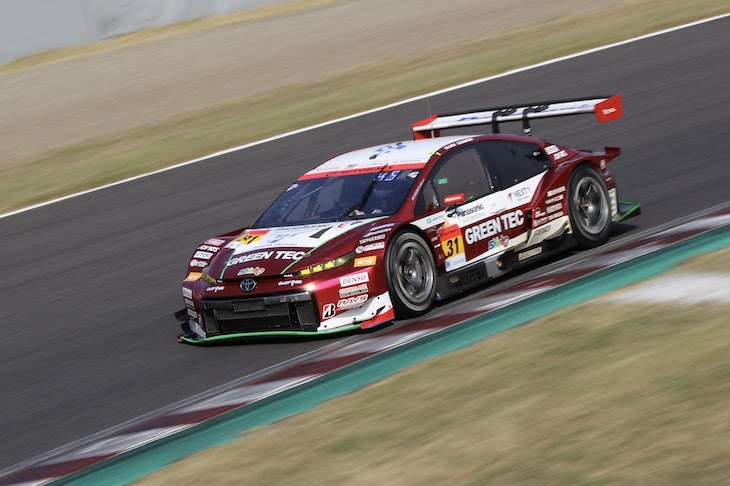 More drama was still to come though, when it looked as if Kondo Racing had pole position, Oliveira’s pole-winning lap was taken off the board as he too had run wide at the exit of Spoon!

That gave the pole position back to Saga and Nakayama, in the #31 Prius – which also gives apr Racing their first pole position since the 2016 finale at Twin Ring Motegi, and of course, their very first with the new front-engined Prius PHV GT! This is Saga’s second career GT300 pole position – his first since 2015 at Motegi.

Qualifying 2nd, having just barely escaped the cut line in their Q1 group, was the #55 ARTA Honda NSX GT3 (Shinichi Takagi/Toshiki Oyu), with the spectacular rookie Oyu putting in a solid lap in Q2, securing an all-Bridgestone front row. And with Oliveira’s fastest lap removed, he and Kiyoto Fujinami will start 3rd, just ahead of the impressive #244 Takanoko-no-Yu RC F of Rintaro Kubo and Miyake, in a season-best 4th for the first-year GT300 entrant Max Racing.

Last but not least, the fight for GT500 pole position. Bertrand Baguette was the first on the board with a hot lap, taking to the top in his #17 Keihin NSX with a 1’47.612. But soon, the Belgian would be displaced by Takuya Izawa in the #16 Modulo NSX: He set a 1’46.239 to take provisional pole position!

A flurry of fast laps in the 1’46 range came in as the seconds ticked down and the chequered flag fell. Ronnie Quintarelli came closest of all in the #23 Motul Autech NISMO GT-R, with a 1’46.699, but the Italian was four-tenths short in the end, and with that, Nakajima Racing completed a perfect Saturday by pacing practice, setting fastest times in both phases of qualifying, and most importantly, locking up pole position for Sunday’s race!

It’s been a long, long time since Nakajima Racing ever sat on the pole – not since the 2012 Fuji 500km when Yuhki Nakayama, then a GT500 driver for Honda, captured pole position in a wet session. Their last win in a championship round was in the 2017 Suzuka 1000km, and that upset victory was ten years removed from their previous race win. 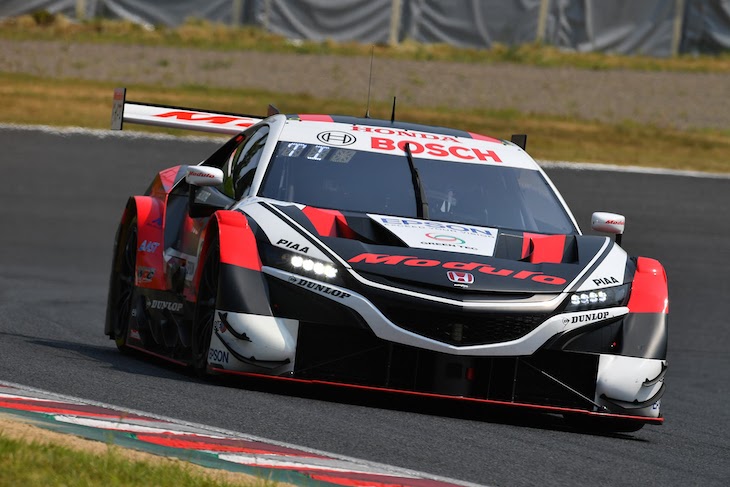 It really does seem as if Dunlop has built an excellent tyre for this sweltering heat, and given that the last two Suzuka GT500 class winners have come from the pole, there’s a good chance for a Nakajima Racing victory at the track where team founder Satoru Nakajima enjoyed so many happy memories, particularly in his Japanese Top Formula and Formula 1 driving heyday.

Amazingly, for Izawa – a 14th-year veteran in his 94th Super GT race, it’s his first career pole position as well.

Quintarelli and hometown driver Tsugio Matsuda will start 2nd in the Michelin-clad #23 Motul GT-R, another positive step for Nissan to get their first front-row start of 2020. One big reason for their uptick in success is the rumour that Nissan has already brought a new version of the NR20B engine for this weekend’s race.

Qualifying 3rd was the #38 ZENT Toyota GR Supra (Yuji Tachikawa/Hiroaki Ishiura), so the top 3 from practice would end up being the top 3 in GT500 qualifying. The Yokohama-clad #16 Red Bull Motul Mugen NSX-GT (Hideki Mutoh/Ukyo Sasahara) and #19 WedsSport Advan GR Supra (Yuji Kunimoto/Ritomo Miyata) will start on the third row, 5th and 6th respectively. The #17 Keihin NSX of Koudai Tsukakoshi & Baguette will look to end their nine-year run of terrible fortune at Suzuka from 7th on the grid, lining up next to the #100 Raybrig NSX-GT (Naoki Yamamoto/Tadasuke Makino) in 8th.

Images courtesy of Mobilityland Corporation and the GT Association (GTA)