Vincent Abril and Louis Prette took their second win of the season in the 2020 GT Open, doing a perfect job in their AF Corse APM Monaco Ferrari 488.

Abril had put the car in pole (“It was something very close to the perfect lap we always talk about”, said the Frenchman) and kept things under control in the first stint. Louis Prette, on a track he didn’t know, completed the job in the second stint, managing a minimal gap. 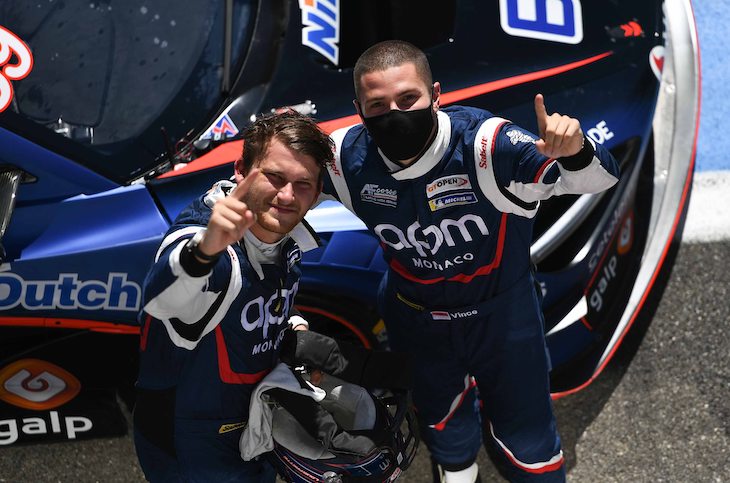 Miguel Ramos-Henrique Chaves were a very close second throughout the day in the TMM McLaren, with the TF Sport Aston Martin of Salih Yoluc-Charlie Eastwood, the winner of yesterday’s Race 1, in third. Those three pairs also lead the overall standings, with Ramos- Chaves at 42 points, only two ahead of Yoluc-Eastwood and four ahead Prette-Abril.

The Pro-Am win was for the JP Motorsport Mercedes of Patryk Krupinski-Christian Klien ahead of the two Optimum McLaren of Joe Osborne-Nick Moss and Brendan Iribe-Olli Millroy. In Am, the returning SPS Automotive Performance of Valentin Pierburg-Christian Hook took an unexpected win ahead of the consistent AKM Mercedes pair of Moiseev-Nesov and the PZ Oberer Zürichsee Porsche of Leutwiler, after the Swiss was involved in an incident and class leaders Scholze-Liebhauser (GetSpeed) got caught in first corner drama.

Vincent Abril took a clean start from the pole and kept the advantage ahead of Chaves and Yoluc, but first corner drama saw Liebhauser and Coletti colliding, with both cars out, while the other Bentley of Mettler lost positions.

On lap 1, Abril led ahead of Chaves, Yoluc, C.Hahn, Ortelli, Pierburg and Krupinski. After a few more laps, Abril and Chaves were still one behind the other, with Yoluc five seconds behind, then Ortelli, Hahn, Leutwiler, Mettler and Nesov. Iribe and Nesov were having a family duel for 9th and the two McLaren got in contact in the last corner, with Iribe spinning.

Abril and Chaves kept fighting, which allowed Yoluc to recover and pass the Portuguese before trying a pass on Abril who fended off the attack on lap 11, one before Yoluc stopped for the driver change.

On lap 22, Hahn, who was leading Pro-Am, had to pit because of a puncture.

There was a great fight between Prette and Ramos in the last 15 minutes, with the Ferrari and the McLaren separated by only 1.5 seconds. Eastwood was third but 22 seconds away.

On lap 23, at the last corner, Leutwiler attacked Negro for fifth but the Ferrari closed the door, there was contact and a spin for the Swiss, who lost the lead in Am, in favour of Hook and Moiseev.

In the lead, Prette kept everything under control until the flag, with Ramos finishing second and Eastwood third ahead of Crestani and Klien, who took the win in Pro-Am ahead of Osborne and Millroy.

STANDINGS AFTER ROUND 4 OF 14