Have you heard the one about Darren Turner, a tiny city car and a huge V8 engine?

I have been attending the VMAX 200 events for over 13 years now. These private events had for many years been held at the former RAF base at Bruntingthorpe in Leicestershire before moving in more recent years to their current home, Kendrew Barracks, in neighbouring Rutland.

For those unfamiliar with this event, essentially it is a top speed competition where road-legal cars are driven from a start line in pairs side by side to a timing beam partway down the runway. The aim is to cross the timing beam at the highest speed before hitting the brakes hard to ensure you slow down sufficiently before you run out of tarmac.

The current record is held by Swedish Hypercar the Koenigsegg One-1 at a staggering 245.6 mph.

Last Saturday saw some superb cars in attendance, as has become the norm with this event and thanks to the organisers having a close relationship with Aston Martin, there is always a display of Gaydon’s finest new cars along with the occasional oddity.

I was pleased to be able to have a good look around the new Aston Martin DBX SUV, a smattering of other modern Astons and also one of only two new Vantage roadsters that was on display for the event attendees to have a close look at.

What I perhaps did not expect to see was the little green city car that pulled up just behind me as I was talking a picture of a very nice black DBX. I heard it approach before I turned around and given the engine note I expected to see a supercar that would no doubt be vying for the top honours on the day. What I saw took me aback, to say the least.

Being a huge petrolhead, however, I immediately recognised the car as the one-off Aston Martin Cygnet V8, having previously seen and photographed it at the London Concours event in 2019. Thanks also to my enthusiasm for Le Mans and GT racing I also recognised the Aston factory driver Darren Turner as he stepped out of the car. I am not sure what shocked me the most, seeing the car on the runway or seeing Darren behind the wheel. 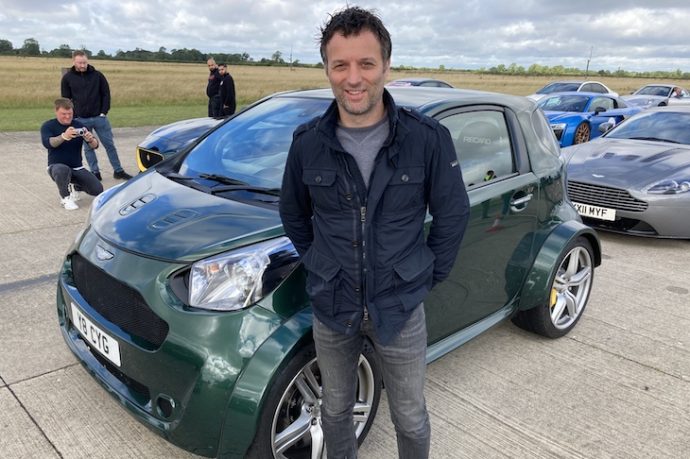 Spending a few moments chatting to Darren he told me it was his first time at the VMAX event and to my surprise that he had driven the Cygnet from its usual home of a storage facility in Stratford upon Avon that morning. Darren, when asked how it had been on the way up, commented that the ride was a little ‘bouncy’.

He also shared with me that the trailer which was parked a few metres away housed a rather pretty Aston Martin One-77 that belong to the same customer as the Cygnet and that this would also be doing some high speeds runs as well.

Unfortunately given the current pandemic the owner of the cars could not travel so Darren was accompanied by representatives from the Aston Martin factory as his ‘pit crew’.

The One-77 is another masterpiece of engineering and despite being worth many millions of pounds it was the Cygnet that was drawing the most attention.

This one-off V8 Cygnet was created for the owner through the ‘Q by Aston Martin – commission’ service and made its world debut at the 2018 Goodwood Festival of Speed. The ‘Q’ section of the marques bespoke personalisation service allows the ultimate in freedom of expression when designing an Aston Martin and the V8 Cygnet continues to push these boundaries.

The car remains very recognisably a Cygnet from the outside. Many of the attendees at the event who congregated around the car not long after it arrived were bemused as to what it was. The face of the little Aston Martin remains largely untouched, with no extra bulges in the bonnet and just a subtle black mesh for the famous grille. However, there is no disguising the extra width of the wheel arches.

It was when the bonnet was lifted that there were almost audible gasps from the gathered group. How could the 4.7-litre, naturally aspirated V8 that is more usually found beneath the bonnet of the previous-generation Vantage S fit into such a diminutive chassis. 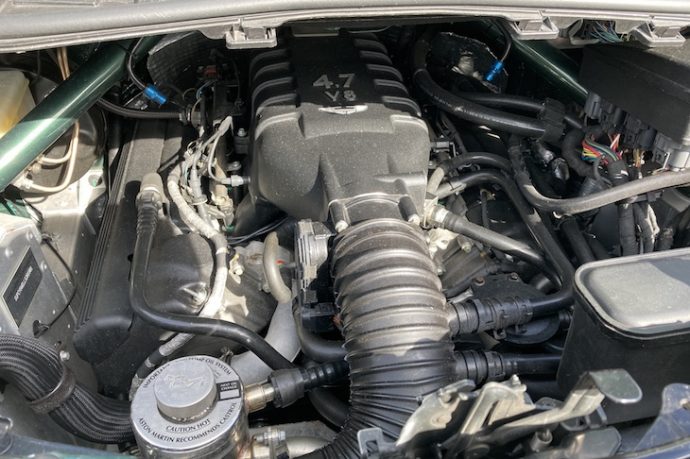 Developed in-house by Aston Martin’s engineers, the starting point for the project was a right-hand drive Cygnet steel body shell and panels. A roll cage was welded to this, becoming an integral part of the chassis in the process, while a new front bulkhead and transmission tunnel were fabricated from sheet metal to accommodate the characterful powertrain. Subframes and suspension are also derived from the previous generation Vantage and a steel fuel tank housing has been mounted in the boot area, utilizing every inch of space. Bespoke intake trunking had to be designed and there are twin conical air filters. There is no sense in which the engine has been neutered for the Cygnet, however, with power and torque figures remaining at 430bhp and 490NM (361lb ft) respectively.

The gearbox is also taken from the V8 Vantage S with a seven-speed Sportshift II transmission taking care of the shifting. Power is transferred via a miniature torque tube to the 9.5” rear wheels, which are complemented by 275/35 Bridgestone tyres. To accommodate the significantly wider front and rear tracks, beautiful carbon composite flared extensions were made. These also house the new forged, five-spoke, diamond-turned wheels, which have grown from 16” to 19” in diameter. 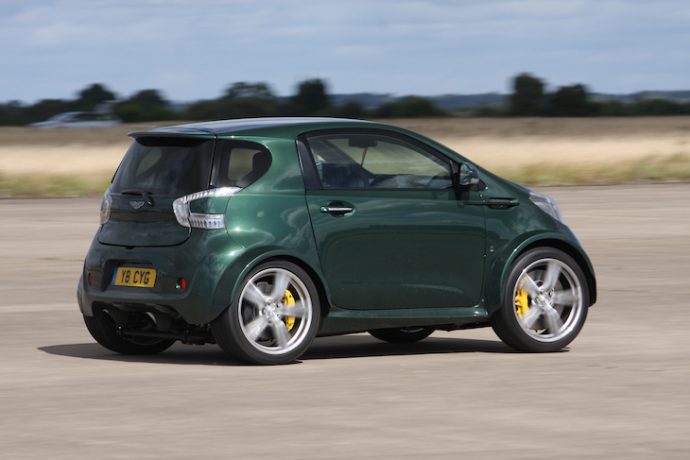 At the rear of the car the distinguishing new feature of the V8 Cygnet is the central twin exhaust pipes. The exhaust is a bespoke system with twin underfloor mufflers and catalytic converters.

Weighing just 1375kg, the V8 Cygnet has a power-to-weight ratio of 313bhp/tonne. As a result, the V8 Cygnet can accelerate faster than the V8 Vantage S with 0-60mph taking just 4.2 seconds.

The rest of the interior is largely indicative of the fact that this V8 Cygnet could easily be used for competition. In addition to the roll cage there is a fully FIA compliant fire extinguisher system and seating is taken care of by composite, fixed back Recaro bucket seats with four-point harnesses. The alcantara covered steering wheel is removable and behind this sits a bespoke carbon dash with the familiar Vantage instrument cluster. There are, of course, little touches of luxury inside as well, with leather pull straps on the unique carbon door cards and two USB ports alongside the bespoke controls for the air conditioning.

Throughout the day Darren to seemed to be enjoying himself immensely and the Cygnet was a regular sight in the queue as the competitors lined up two abreast to take to the runway. 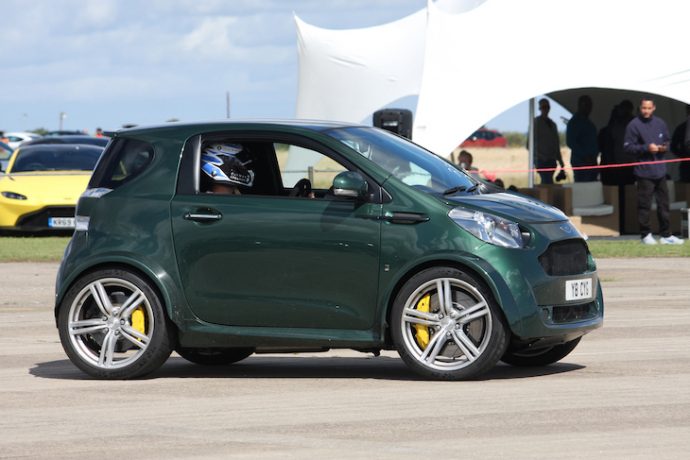 The noise from the Cygnet V8 is superb. With relatively short distances involved from manifold to tail pipe the V8 Cygnet has a voice that belies its compact size. Many a time I watched people with their back to the runway turn around as they heard the car accelerate away only to chuckle as they saw the little Cygnet pick up its heels and head for the horizon. 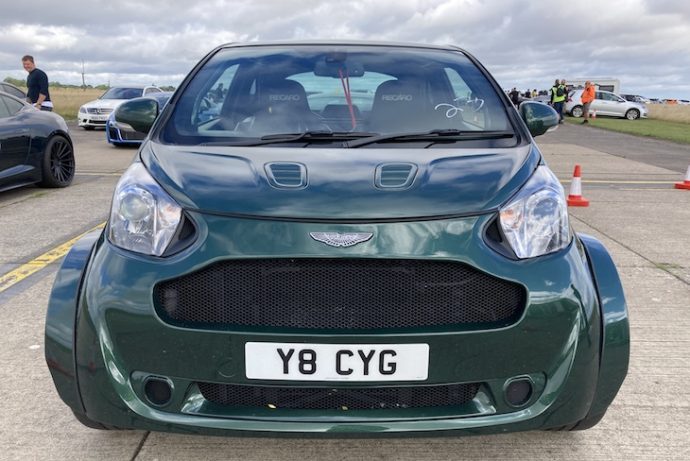 Although it was never going to take the outright crown, in fact its terminal speed was probably one of the slowest on the day at 153mph, there can be no doubt Darren had the biggest smile on his face. The same can also be said for any of the fellow competitors who were involved in a duel with the little green penny racer as it was launched down the runway time after time.