After a half-hour delay for barrier repairs following Michael Fassbender’s early session shunt in the #93 Proton Porsche the GTE qualifying session got underway and was immediately dominated by Alessio Picariello, putting smiles back on Proton Competition faces. 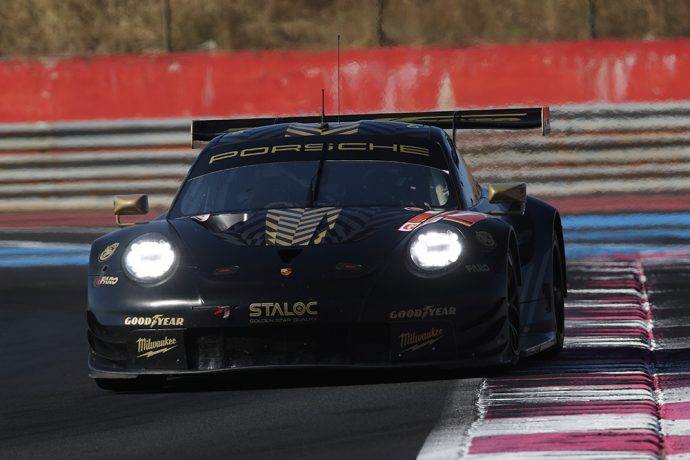 His first effort, 1:54.508 would be good enough to see off the best of the rest as Nicklas Nielsen pushed hard, almost losing it out of the final turn over the slippery kerbs. He’d end the session a quarter second back from the Porsche, Picariello abandoning a lap that was looking to be faster still.  The #51 AF Corse Ferrari (Daniel Serra) and #74 Kessel racing 488 GTE will complete Row 2.

LMP3 and the rain had started to come down more heavily, early trouble for Colin Noble, the #7 stopping at T2 and requiring a reset, several cars finding little grip, Boyd in the #2 and Grinbergas in the #16 running very wide as anyone on slicks pitted immediately for wets!

Just two cars had completed a flying lap with 2:30 to go, Garett Grist topping the session with a 2:12 before the cars that had stopped for wets came into play  Duncan Tappy and Malthe Jakobsen topped the order, both into the 2:09s in the #3 United and #15 RLR Sport Ligiers.

Both top drivers improved as others managed to get into the 2:09s, 2:08.852 for Tappy, but an excellent 2:07.584 looked to have it in the bag until David Droux surprised RLR, already celebrating in the garage, and the TV commentators, who missed him crossing the line to take pole, 2:07.207. 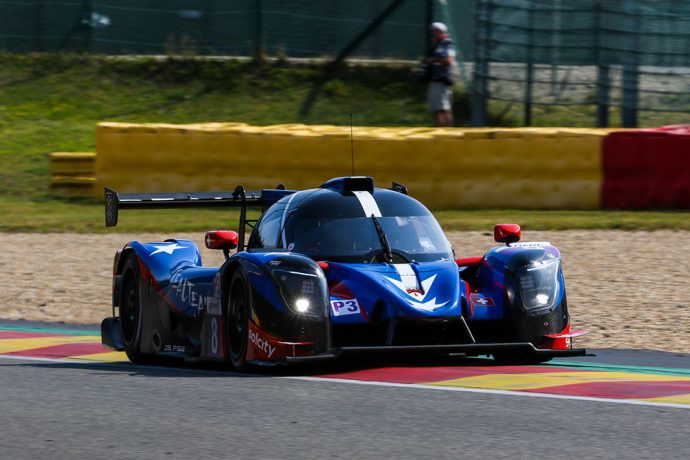 Jakobsen would have to put up with second!

The second row in LMP2 was an all-United Autosports affair, Duncan Tappy in the #3 Ligier ahead of Wayne Boyd in the #2.

Niko Kari (EuroInternational) and Nigel Moore (Inter Europol) made up row three in a session dominated by the Ligier JS P320s, they filled all eight top places ahead of the four Duqueines the quickest of which (Garett grist in the #10 Nielsen car) was 3.5 seconds off pole.

There was a red flag too in the LMP2 session, Anders Fjordbach spinning off and brushing the wall with the rear of the #20 at T13, 6 minutes remaining and no flying laps posted – most runners looking to be running inters from the start of the session.

There were off-track moments for the #28 IDEC Sport (Chatin), #30 Duqueine (Hirschi) and #50 Richard Mille (Floersch) Oreca before a time was put on the board. That came with under 90 seconds to go.

Filipe Albuquerque was the first driver under 2 minutes, followed by Loic Duval, but both were bested by Jean-Eric Vergne.

With the final available shot at a time, a quick-fire group all went quicker -,n rapid succession Thomas Laurent, Jonathan Hirschi and then Albuquerque went quickest.

The #22 United man closed the line with a 1:56.951 almost a second faster at that point than anyone else with Vergne still on a quick lap to the chequered flag.

He’d be just a hundredth of a second shy of the Portuguese’s mark though, confirming Albuquerque’s third consecutive pole position.

Hirschi would finish third in the session after two spins in the 10-minute qualifier for Duqueine Team with Loic Duval fourth fastest in the Goodyear-shod #24 Algarve Pro Oreca.

Whilst the GTE cars quailed faster than the LMP2s due to the deterioration of weather conditions between sessions, there is likely to be a decision to re-order the grid for safety bearing in mind the prevailing conditions expected at race start time.