Arctic Energy with the #17 of Nerses Isaakyan finishes second and third in the category in the two races.

The #38 HRC of Clément Seyler and Fabien Michal completes the podium in race 1.

CD Sport breaks its run of bad luck with a runner-up finish in race 2 with its #30 Ligier JS2 R driven by Claude Dégremont and Baptiste Berthelot.

The Italian HP Racing Team and its #50 JS P4 with Andrea Dromedari behind the wheel scores big points towards the championship.

In contrast to the days in the lead up to race 1 of round three, the start was given under cloudy skies and cooler temperatures. The #50 HP Racing Team Ligier JS P4 with Andrea Dromedari aboard shared row one with the #45 MV2S Racing Ligier JS2 R and its driver Victor Shaytar. The #38 HRC Ligier JS2 R with Fabien Michal aboard and the #17 Arctic Energy with Nerses Isakyaan behind the wheel started from row two. 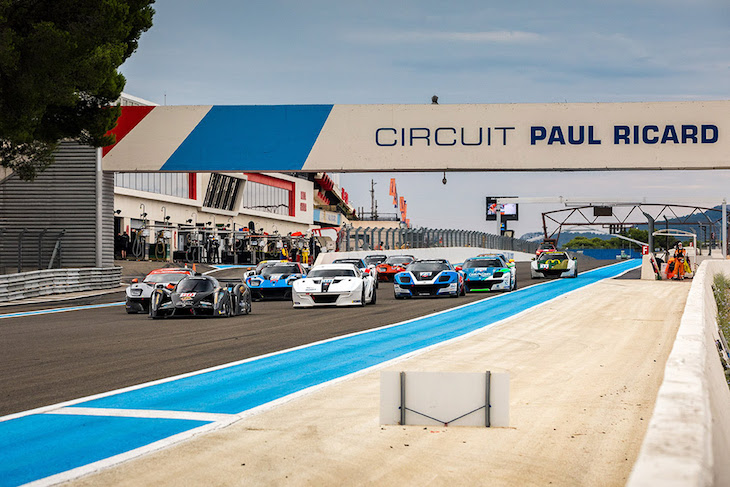 10:25 am, green flag! Sébastien Baud in the #74 Cool Racing entry jumped in the lead of the Ligier JS2 R category and Fabien Michal moved ahead of Victor Shaytar to slot into second place. It was for just a brief moment as the Russian driver quickly regained the position and then the lead of race. This set the tone in what was an action-packed GT category. 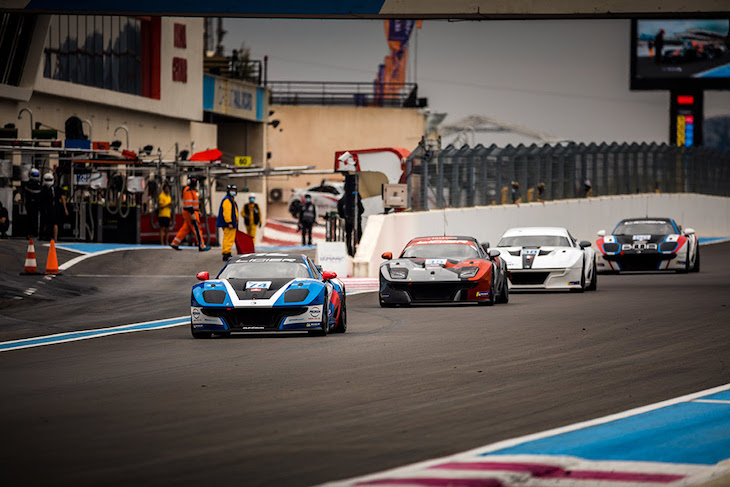 Sadly, very early on there were two incidents: the first involved the #30 CD Sport JS2 R of Claude Dégremont and Baptiste Berthelot with the #17 Arctic Energy, then the #69 M Racing driven by Laurent Millara and the #11 TM Evolution JS2 R with Alain Grand at the controls, resulting in retirement for the #30, #11 and #69.

After an 11-minute neutralisation period, the race resumed.

Victor Shaytar in #45 held onto the lead in the category. Sébastien Baud in the #74 got the advantage over Fabien Michal in the #38 in their battle for second place, while the #66 and #68 from M Racing driven by Natan Bihel and Mathieu Martins joined the fight. Meanwhile, Nerses Isakyaan in the #17 began a long comeback drive. 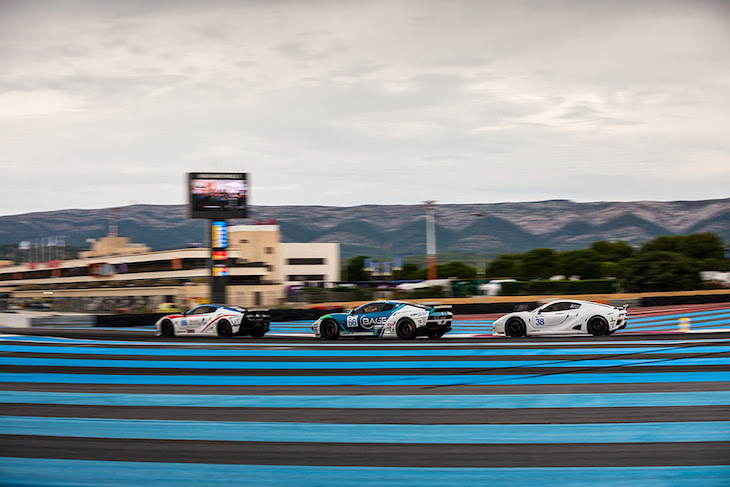 The pit window opened for the mandatory pit stop. The #45 was one of the last to come in. But the stop was too short and it was given a one-second stop and go penalty that dropped Mikhaïl Makarovskii to the dull end of the order. It was the same story and consequence for Bruno Chaudet in the #25 TM Evolution JS2 R.

The #74 pulled away, while the #38, #66 and #86 began an intense three-way scrum for the remaining places in the top 3. The #17 Arctic Energy returned to the sharp end of the order in the final 15 minutes of the race, as a few drops of rain began to dampen the race surface and managed to slot into second place. A fantastic late-race duel developed between Nerses Isakyaan in the #17 and Clément Seyler in the #38, where they passed and repassed one another. 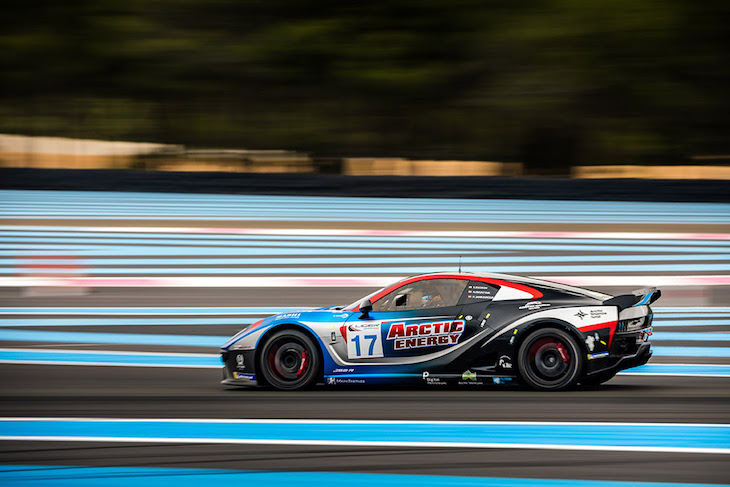 The suspense on the wet track remained on the boil just until the chequered flag. Nerses Isakyaan got the nod in the last meters of the final lap to finish in second place. Meanwhile, Sébastien Baud took a comfortable victory in the JS2 R category. 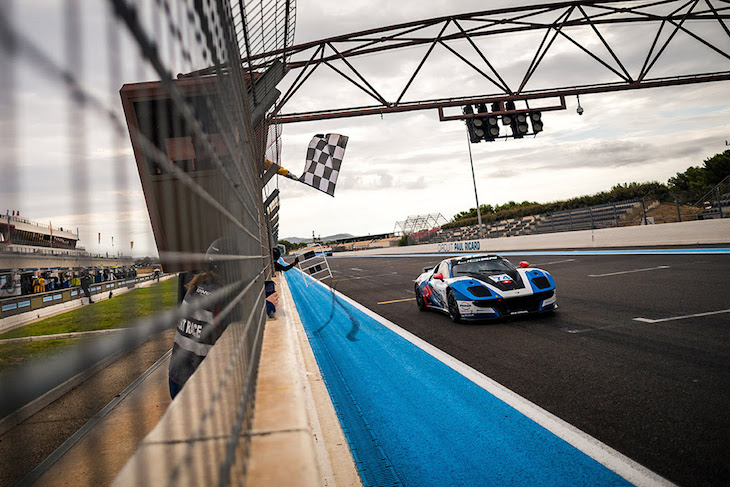 Fourth and fifth place went to M Racing and its drivers, the father and son duo of Erwan and Natan Bihel in the #66 and youngsters Mathieu Martins and Ewen Hachez in the #86, after an excellent battle between the sister cars. Antoine Chapus in the #46 MV2S Racing Ligier JS2 R and Bruno Chaudet from TM Evolution finished respectively seventh and eighth in the category. 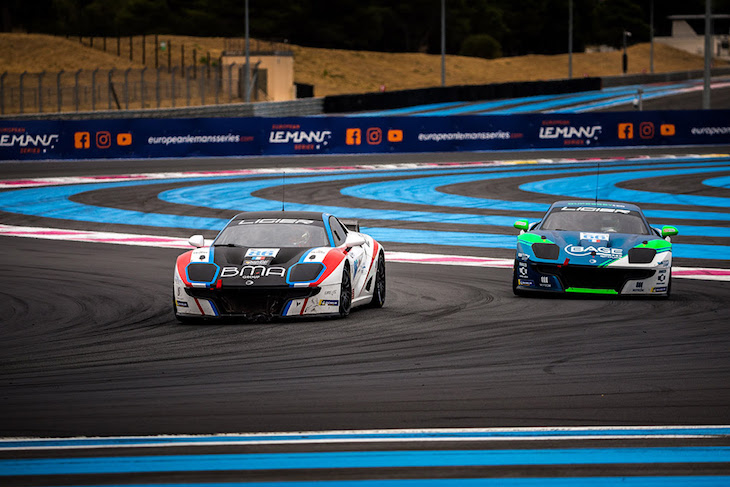 Andrea Dromedari in the JS P4 category assured the victory for HP Racing after a trouble-free race.

At 4:50 pm race two started but it was much different than the first race of the day. The 12 Ligiers followed the safety car on a track declared wet by the race stewards. Two laps later the safety car pulled off to allow the race to begin in earnest. 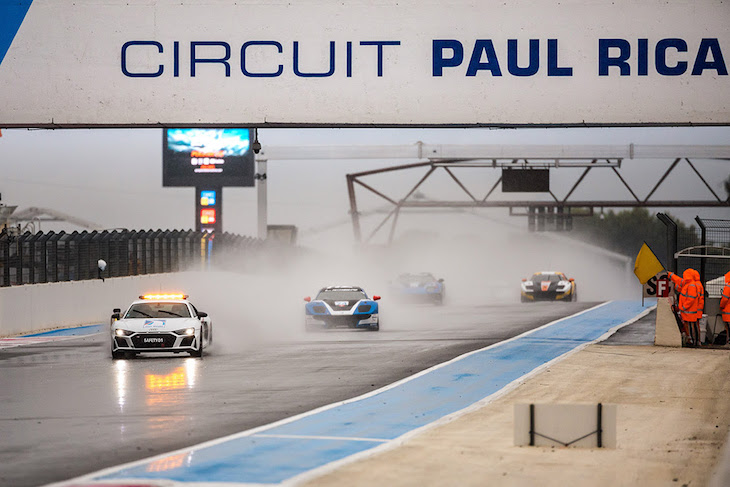 Andrea Dromedari in the #50 Ligier JS P4 of the Italian HP Racing Team ceded ground to the GTs, whose chassis is naturally a little more at ease on a wet track surface than the sport prototypes, and played it safe throughout the race to score valuable championship points. 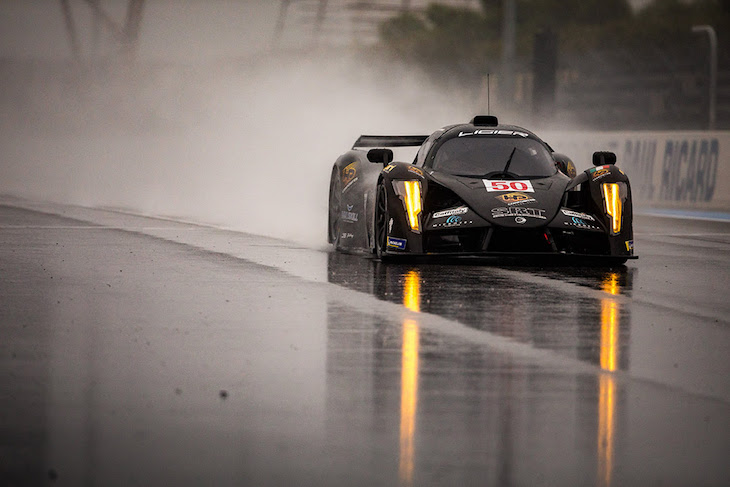 Taking the track conditions into consideration, Bruno Chaudet in the #25 TM Evolution Ligier JS2 R decided not to take any unnecessary risks and wisely headed to the paddock after a few laps.

For the top five JS2 Rs the laps ticked off in the same order as the starting grid, #74, #17, #30, #38, #66, on a track becoming particularly problematic. The mandatory pit-stop at half-distance did not create any significant changes. 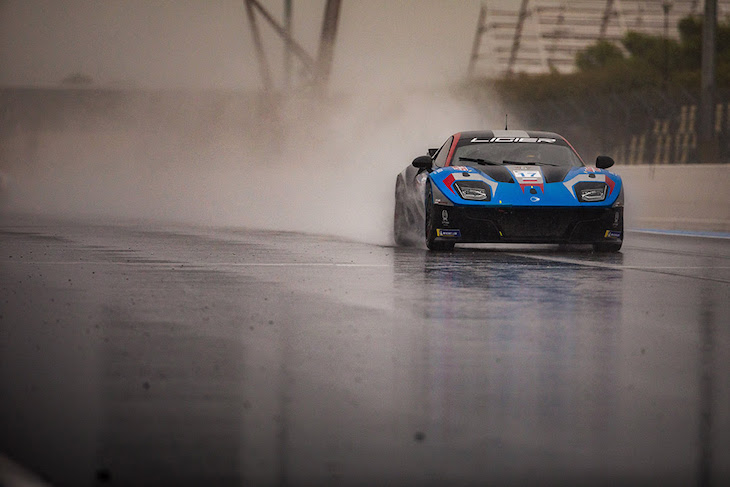 Track conditions did not improve, but Claude Dégremont in the #30, who is a bronze driver and has experience with difficult conditions, surprised Nerses Isakyaan in the #17 Arctic Energy to move up to second place. He went on to finish a tad more than two seconds behind race-winner Sébastien Baud, which was sweet revenge for the entire CD Sport team that has had more than its share of bad luck since the beginning of the championship, and victim of a mechanical issue after contact in race 1.

The #69 M Racing in the hands of Laurent Millara returned to the pits for good 20 minutes prior to the finish, with windscreen wiper problems that made continuing on in the race too risky. They were not classified.

With roughly 18 minutes to go, aquaplaning became an issue on the track. One of the two other M Racing cars, the #86 and its driver Mathieu Martins finished in the tyre wall at Bendor corner. The driver escaped unscathed, but the safety car neutralised the race. With just a few minutes remaining the red flag was shown freezing the positions and bringing this difficult race to an end.

Apart from CD Sport’s stranglehold on second place, the top six positions in qualifying in the JS2 R went unchanged and the gaps between the cars were small, which is proof that the drivers chose to be careful. Sébastien Baud in the #74 Cool Racing Ligier JS2 R scored his second win of the day and now has a comfortable lead in the championship. Behind the #30 and #17, in fourth place Fabien Michal and Clément Seyler in the #38 HRC and the Bihel father and son tandem in the #66 M Racing. 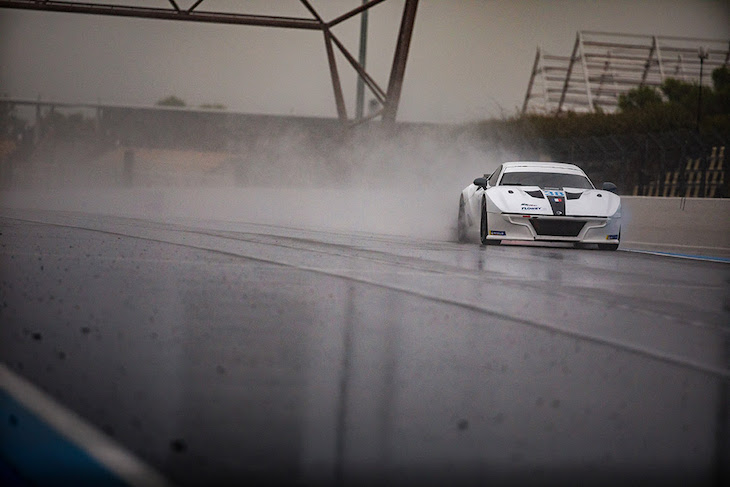 Two penalties for not respecting the minimum time in the pits were levied on the MV2S Racing cars, the #46 of Antoine Chapus and the #45 of Victor Shaytar and Mikhaïl Makarovskii, put the two JS2 Rs out of contention following the stops. They finished seventh and eighth. Alain Grand in the #11 TM Evolution was the final finisher.

This sixth race of the season was a nerve racker for the drivers. While Mathieu Martins and Ewen Hachez in the #86 were unlucky, the majority of the cars made it through this race intact. Everyone concerned hopes for sunny skies in Italy for round four on October 9 and 10. 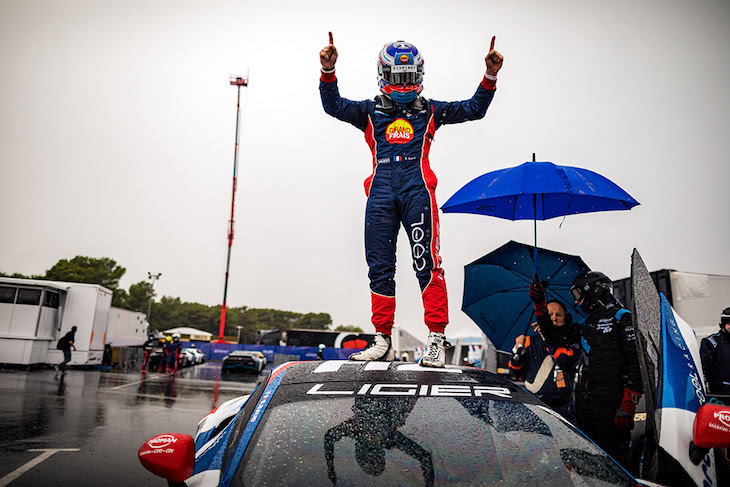 “This is my fourth victory in the Ligier European Series on this very same track, but the first two races of the season were run in the dry. In race 1 we kept the old settings that worked brilliantly and in race 2, which was new for everyone, the rain. I love everything that slides, but I had not driven this car in the rain before and it was a lot of fun! We fought well against our rivals. It was a four-car battle for the win in race 1. I jumped into the lead at the start of the race. It was the same in race 2. I started from pole and never looked back until the end and held onto a one-second gap. The goal for me is to do the same in Italy and Portugal and to win the championship!”

“The race conditions were very difficult today. It was also very important for me to not take any chances and to finish the race. More than anything else, the goal is to score points toward the championship. Now, I will wait for the other competitors to return in Italy so I can battle against them at Monza next month. This is my priority, to win on home soil, in Italy!”