Toyota Gazoo Racing (TGR)-Latin America have announced their purchase of the first Toyota GR Supra GT4 into the North American marketplace and will enter the IMSA Michelin Pilot Challenge in 2021 with the car prepared by Riley Motorsports. The car is set to make its North American race debut in a four-hour endurance event at Daytona International Speedway supporting the Rolex 24 Hours in January 2021.

The new GT4-spec Supra has already raced successfully in a number of European Series including the British GT Championship, GT4 European Championship and the NLS.

“We are pleased to announce the sale of the first GR Supra GT4 customer race car in the United States to Toyota Gazoo Racing-Latin America,” said Tyler Gibbs, general manager, TRD U.S.A., Inc. “The passion of the Toyota Latin American distributors and dealers, combined with a team like Riley Motorsports, who is a long-standing proven winner in American sports car racing, should make for a competitive customer effort with the Supra GT4 on track next season.”

The customer racing effort is run by Massa Inoue, the CEO of Toyota Latin America, who is joined by Daniel Herrero, serving as the Gazoo Racing Latin America Chief Officer while Javier Quiros, the Toyota dealer and distributor to Costa Rica, is the GR Supra GT4 team principal. 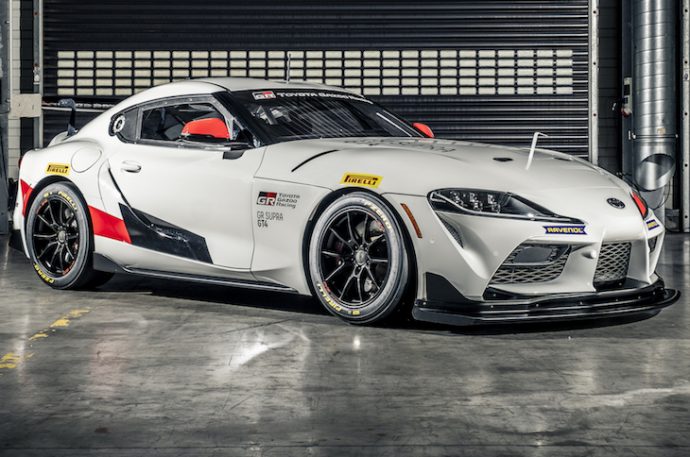 “Racing in the IMSA Michelin Pilot Challenge with a GR Supra GT4 is a very important step we are taking to strengthen our motorsport project across the whole continent,” said Daniel Herrero, Toyota GAZOO RACING Latin America Chief Officer. “It’s the growth of TGR-Latin America beyond its borders. As we always say at TOYOTA GAZOO Racing: we are pushing the limits for better, to keep improving. Entering one of the IMSA categories, in one of the most competitive motorsports series in the world, will help us continue to grow, develop our personnel and make ever-better cars.”

“We are really excited to be part of the new GR Supra GT4 racing program in IMSA next season,” added Bill Riley, team principal, Riley Motorsports. “It looks competitive right out of the box, and I know it won’t disappoint.”

Further information regarding the team and driver lineup will be announced at a later date.

TRD U.S.A. will support Supra GT4 customers at all of the IMSA Michelin Pilot Series races beginning in 2021 with a systems engineer and spares truck.

The GR Supra GT4 is on display at Michelin Raceway Road Atlanta this weekend in the IMSA Michelin Pilot Challenge paddock.

Picture top is the car displayed during the 2020 Rolex 24 at Daytona weekend.