Off the back of an incredible final stint from Ricky Taylor, the #7 Acura Team Penske ARX-05c of Taylor and Helio Castroneves won the IMSA Weathertech Sportscar Championship race from Road Atlanta.

Taylor took the lead of the race with just over an hour to run after using slower GTLM traffic as a pick to get past his teammate Dane Cameron in the #6 Acura Team Penske ARX-05c. From there, Taylor extended his lead to over ten seconds as the DPi field worked their way into and out of traffic in the closing stages.

Castroneves was installed into the car for the final stint of the race and the veteran driver was able to preserve the lead, survive a late-race restart and fend off a hard-charging Harry Tincknell in the #55 Mazda RT-24P.

Tincknell, Jonathan Bomarito and Ryan Hunter-Reay ended the race in second in the #55 Mazda. Tincknell had been catching Castroneves but was unable to mount a challenge in the final two-lap dash to the finish.

That two-lap sprint was set up by a late-race Full Course Yellow involving the #6 Acura and the #63 Scuderia Corsa Ferrari 488 GT3.

Toni Vilander, who was in the #63 Ferrari had been shuffled off the track and onto the grass in the esses. Vilander, with little room to safely rejoin the track, clipped the rear of the #6 Acura as Juan Pablo Montoya drove by. That sent Montoya into the barrier and left the #6 Acura with significant damage to the right side of the car.

Montoya was uninjured and the #6 Acura ended the race in sixth.

The #31 Whelen Engineering Cadillac DPi-V.R. of Felipe Nasr, Pipo Derani and Filipe Albuquerque rounded out the podium. Nasr and Derani were able to rebound from a drive-thru penalty that Derani incurred for incident responsibility earlier in the race.

The #5 Mustang Sampling/JDC-Miller Motorsports Cadillac DPi-V.R. of Sebastian Bourdais, Joao Barbosa and Tristan Vautier came home in fourth. The #5 Cadillac, while not always a threat for the win has finished every race this season in the top four.

Rounding out the top five was the #10 Wayne Taylor Racing Cadillac DPi-V.R. of Rengar Van Der Zande and Ryan Briscoe.

In GTLM, the #25 BMW M8 GTE of Connor De Phillippi and Bruno Spengler took home the win in what was likely the best GTLM race of the season with all three manufacturers controlling the lead of the race at various stages. 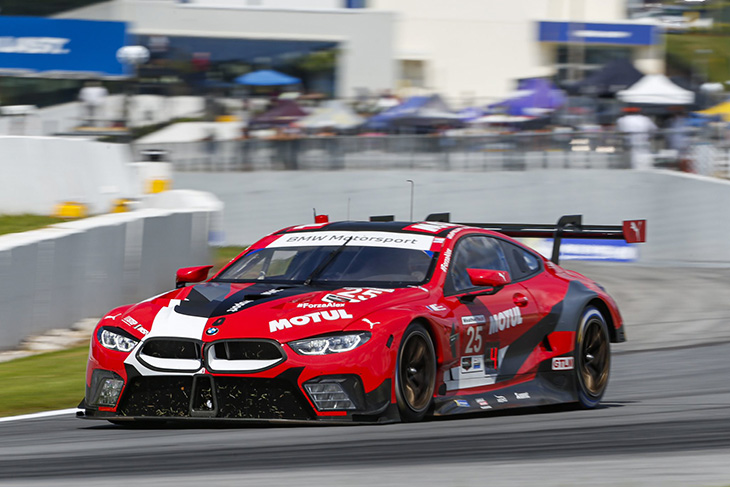 The winning moment for BMW came during the final round of pitstops when the #25 BMW was able to leapfrog the #911 Porsche 911 RSR for the lead of the race. The #25 BMW had pitted a lap earlier and had its tyres already up to temperatures when De Phillippi caught and passed Nick Tandy in the #911 Porsche who had just exited the pits.

Like Castroneves in DPi, De Phillippi was able to survive the late-race restart and bring home the win ahead of the #4 Corvette C8.R of Tommy Milner and Oliver Gavin.

The #24 BMW M8 GTE of Jesse Krohn and John Edwards ended the race in third. Two cars on the podium is a result that BMW Team RLL will surely be happy with after their BMW M8 had looked rather uncompetitive in the previous handful of rounds.

The top-finishing Porsche was the #911 Porsche of Nick Tandy and Frederic Makowiecki. They had the lead entering the final pitstop but dropped down the order in the final stint of the race.

Given the pace that they showed in the race, Porsche will certainly be disappointed with the result. But with the competition in GTLM in this race as close as it was, someone was almost guaranteed to end the day feeling like there was more in the cards.

The #912 Porsche 911 RSR of Earl Bamber and Laurens Vanthoor ended the day last in class. They ran into tyre issues and mechanical gremlins that left them two laps off the lead. They were the only car in GTLM to run into issues.

Vanthoor took to Twitter in the second half of the race to say, simply: “I’m fed up.”

The #3 Corvette C8.R of Jordan Taylor and Antonio Garcia ended the day in fifth.

Mario Farnbacher showed why he has earned the nickname ‘Super Mario Farnbacher’ as he guided the #86 Meyer Shank Racing Acura NSX GT3 to a win for himself and teammates Matt McMurry and Shinya Michmi. 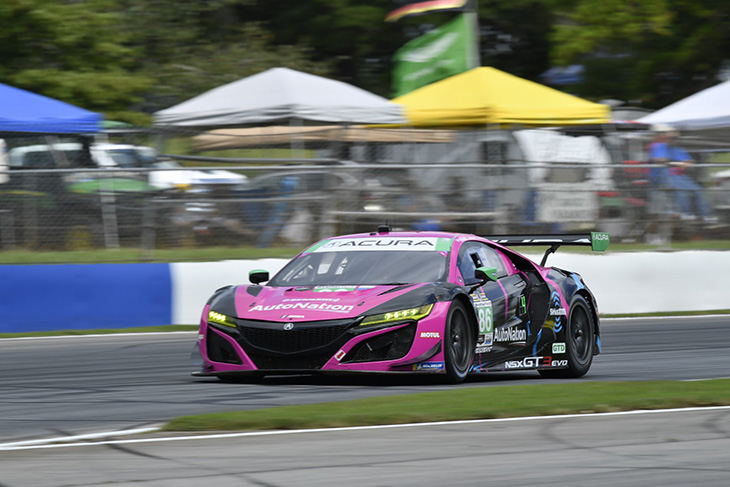 With just over an hour to run and during pitstops while under Full Course Yellow, the Meyer Shank Racing pit crew gave Farnbacher the lead. They were able to leapfrog the #48 Paul Miller Racing Lamborghini GT3 who had led for much of the day.

The #16 Wright Motorsports Porsche 911 GT3.R of Ryan Hardwick, Jan Heylen and Patrick Long rounded out the GTD podium. Long gave Sellers a fight for second on the final restart, crossing the line just 0.424 seconds behind the #48 Lamborghini.

Their battle left Farnbacher to run away from the field in the two-lap dash to the finish, allowing him to cross the line 2.451 seconds clear of the field.

The #48 Lamborghini had the long-run pace which allowed them to control the lead for the middle portions of the race which were not interrupted by Full Course Yellow. Two FCYs in the final hour and a half, though, allowed the #86 Acura to showcase their short-run pace.

One of those Full Course Yellows was a result of contact between the #44 GRT Magnus Racing Lamborghini Huracan GT3 and the #31 Cadillac. The two made contact at high speed as they both went for the same piece of track in the Esses.

A look at the incident from earlier. pic.twitter.com/ps3iB0GYAG

Pipo Derani in the #31 Cadillac dived to the inside of Spencer Pumpelly as he turned in for the apex of the corner. The ensuing contact sent Pumpelly into a stand-alone tyre barrier which slowed the Lamborghini down before it hit the main tyre barrier on the edge of the circuit.

“I’m okay. I never saw him. I’m so sorry, guys.,” Pumpelly said on the radio after the incident. He walked to the medical vehicle without assistance. The #31 Cadillac was given a drive-thru penalty for incident responsibility.

Today is the first time since the Rolex 24 that a Lexus did not finish in the top four.

In LMP2, the #52 PR1/Mathiasen Motorsports ORECA 07 took home the win with ease after the only other car in the class ran into trouble on the opening lap. It’s the second win of the season for the California-based LMP2 team that has continually been a staple of the struggling class. 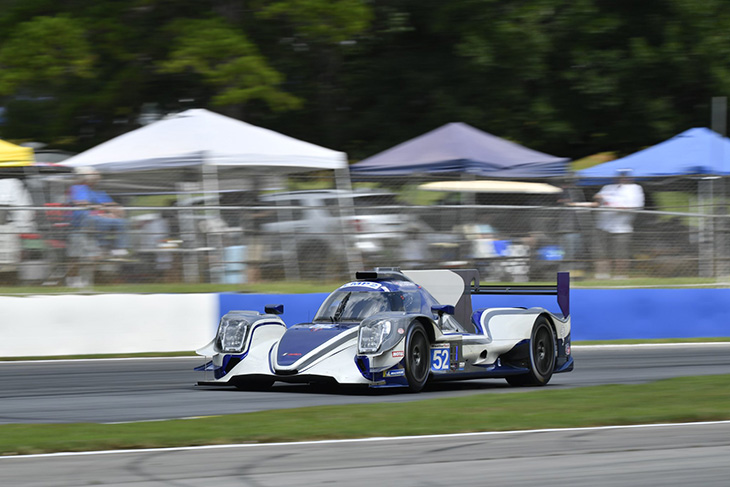 The #18 Era Motorsports ORECA lost a considerable amount of time to the #52 ORECA after having to spend time in the garage for repairs following contact with the #85 JDC-Miller Motorsports Cadillac Dpi-V.R. on the opening lap.

Both the #18 ORECA, driven at the time by Dwight Merriman and the #85 Cadillac went for the same gap as they reacted to avoid the spinning #6 Acura Team Penske ARX-05c as the field came to the green. With their only competitor over thirty laps behind, Patrick Kelly, Simon Trummer and Scott Huffaker guided the #52 ORECA to the finish with little fanfare.

With this win, Kelly gains the sole position of the LMP2 driver’s championship and PR1/Mathiasen move into the lead of the team’s championship in LMP2.