Mercedes-AMG Team Hirix Racing’s chances of winning the 2020 Fuji Super TEC 24 Hours appeared to go up in flames, quite literally, when their bright yellow #888 Mercedes-AMG GT3 Evo caught fire spectacularly in the pit lane less than three hours into the race.

Thanks to the quick work of their own mechanics, as well as circuit safety workers and even mechanics from neighbouring teams, their crew not only escaped any significant injuries and the car itself was not terminally damaged – but most incredibly of all, out of that fire arose a worthy winner of the fifth 24-hour endurance race at Fuji Speedway and the first winner of the 2020 Pirelli Super Taikyu Series that had been delayed due to the novel coronavirus pandemic.

The burns on the passenger door of the #888 Hirix AMG GT3 will serve as a reminder of the trials of endurance that drivers Hisamori Hayashi, Daisuke Yamawaki, Shaun Thong, Shinichi Takagi, and Yuki Nemoto endured en route to victory.

The clouds opened with force as the rain began to fall for the first time at the end of the first hour. An hour and a half into the race, came the first Full Course Yellow (FCY) to recover a stranded backmarker on the track, which eventually became the first Safety Car intervention. By now, all of the front runners had switched to wet-weather tyres.

The #81 Daishin GT-R GT3 (Nobuyuki Oyagi/Kazuki Hoshino/Ryuichiro Oyagi/Kiyoto Fujinami/Kazuki Hiramine/Natsu Sakaguchi) drove into contention after a strong first stint from Hoshino, who handed off to Fujinami for the next leg. The two-time and defending race winners, representing GTNET Motor Sports, could have seen their quest for three wins in a row vanquished before the race after a crash in qualifying. They made it to the grid with minutes to spare, thanks to the effort of the GTNET mechanics – and soon, they were in contention at the front of the field.

The D’station Vantage was cruising at the front with Kondo driving, until just after their second pit stop, when the right-rear wheel flung loose in the third sector – nearly collecting a GT4 car in the process – and bringing out the second Safety Car. This would be the first of several misfortunes for the pole-winning machine during the night.

It was in this Safety Car that the Hirix AMG caught fire, just as Nemoto was relieving gentleman racer Yamawaki and getting ready to drive off after their second stop of the race. The excess fuel ignited, and mechanics and safety crews rushed to put it out. Just as the Hirix AMG was going back to the garage to assess and repair the damage, the Safety Car was withdrawn…for all of five minutes, before it was summoned again. 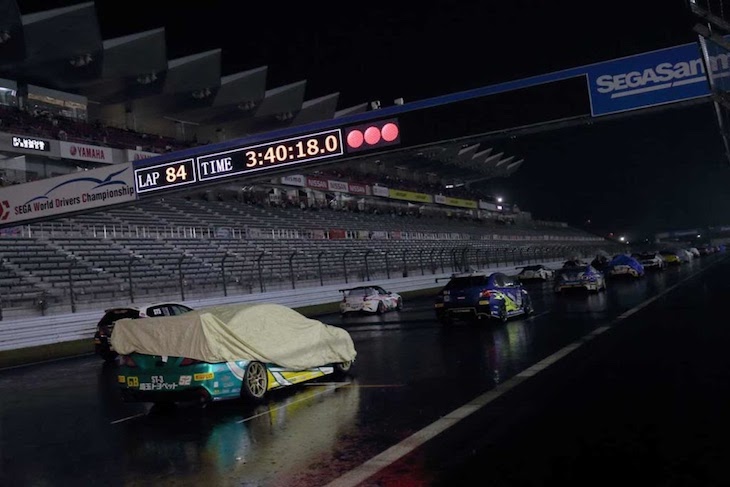 Heavy rain relentlessly lashed Fuji Speedway after sunset. Three hours into the race, the rain had become so severe that the race was red-flagged for a total of four and a half hours before eventually going green after another half-hour under Safety Car.

There were ten Safety Car interventions in total, most of them due to the weather, along with five Full Course Yellows. Heavy rain and intermittent fog during the night was just too great a challenge to ask a field of mostly amateur teams and drivers to power through at speed. In total, there were nine hours, 22 minutes’ worth of red flag and safety car periods, leading to a record low distance of 528 laps and 2,409 kilometres, a far cry from the record 801 laps completed in 2019.

But it was something of a miracle that the race was even able to resume after all, albeit subject to repeated Safety Car interventions that were over 45 minutes long at points. Almost as miraculous as that was that the Hirix AMG only lost five laps from what would have been a total disaster for the team in their debut race.

Overnight, the D’station Vantage, which had lost dozens of laps for repairs, suffered another stoppage caused by a tyre failure – leading to another trip to the garage. D’station Racing would retire the Vantage GT3 just past the halfway point of the race, completing just 88 laps. Around the same time, misfortune befell the #9 MP Racing GT-R, which went to the garage for what was believed to be its compulsory 10-minute maintenance period to change brakes. Ten minutes passed, and the yellow Nissan was still in the garage. A tyre failure damaged the wheel housing and driveshaft, and they lost around 10 laps in repairs.

This put the #81 Daishin GT-R ahead of the #888 Hirix AMG, now with a healthy margin of 1-2 laps between them, during a period of repeated Safety Car running broken up by small chunks of green flag racing. It was during one of those Safety Car restarts that the #81 Daishin GT-R would be tagged with a 60-second stop/go penalty for a pit lane speeding infraction, a massive penalty that effectively erased the leading GT-R’s advantage over a car that had quite literally been consumed in flames just before sunset, and was now on the lead lap before sunrise. 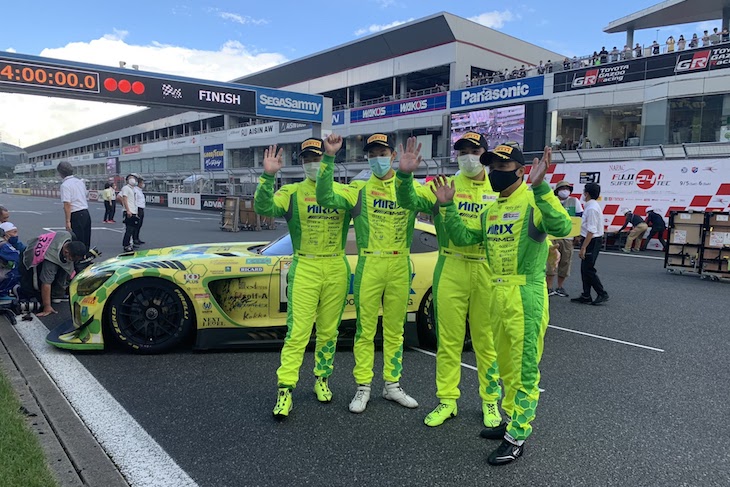 When the sun came up at 5:30 AM Sunday, the light was beginning to burst through the clouds. There was even a beautiful rainbow over the town of Oyama to greet a crowd of just under the maximum 5,000 spectators – all observing proper social distancing in the stands, in the paddock, and of course, while camping and barbecuing at trackside.

Having overcome the stop/go penalty, the #81 Daishin GT-R was still in the mix for the victory. But just short of the three-quarter mark, disaster struck: Kazuki Hoshino reportedly made contact with a backmarker, resulting in suspension damage that would necessitate 20 minutes in repairs. Any hope of a record third consecutive Fuji 24 Hours victory for GTNET Motor Sports was extinguished like the fire from which the Hirix AMG had somehow survived, to take a nearly unassailable lead. The rain would come and go some more in the final quarter of the race, but not enough to stop the race again. 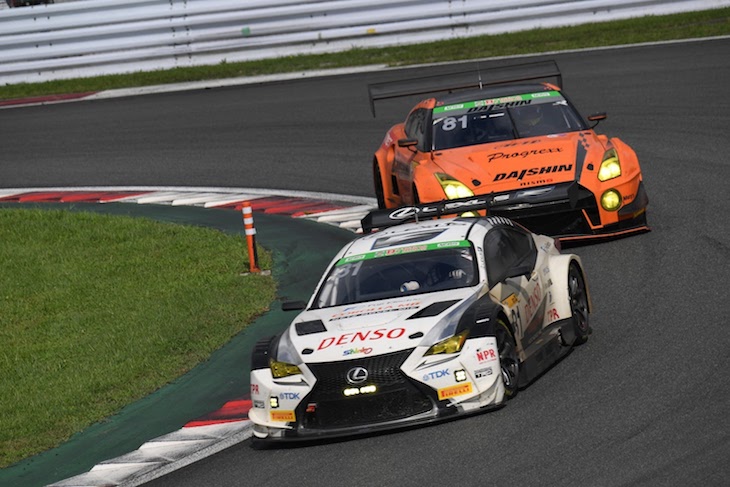 Finishing second overall was the #31 Denso Lexus RC F of apr Racing (Hideki Nagai/Koki Saga/Kazuto Kotaka/Hiroaki Nagai/Yuichi Nakayama/Yuta Kamimura), four laps off the lead in the end. Third overall was the #81 Daishin GT-R, eleven laps down, their quest for three straight wins at the Fuji 24 Hours denied due to a steep speeding penalty and damage, but it didn’t take away from the fact that Team Daishin, once a staple of the JGTC/Super GT, were back and so were the Oyagi family, father Nobuyuki joined by his son Ryuichiro in a race for the first time. The #9 MP Racing GT-R was fourth, another lap behind. 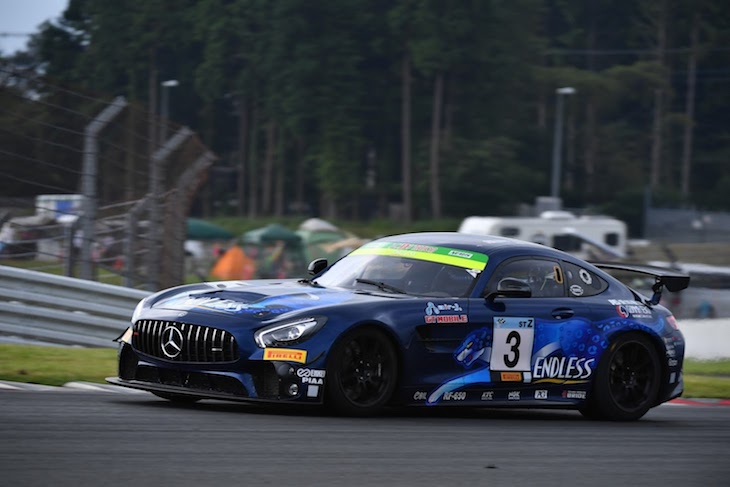 Fifth overall and claiming ST-Z class honours for the second consecutive year as king of the GT4s was the #3 Endless Sports Mercedes-AMG GT4, driven by Yuudai Uchida, Hideki Yamauchi, Tsubasa Takahashi, Shinnosuke Yamada, and Ryuichiro Tomita. They completed 510 laps en route to a confident class victory, as an early routine maintenance stop helped them wrestle control of the class away from the #20 SS/YZ Studie BMW M4 GT4 (Hirokazu Suzuki/Takayuki Kinoshita/Jukuchou Sunako/Seiji Ara/João Paulo de Oliveira), who finished a lap behind in 6th overall.

The #290 F-Link Home Honda Civic TCR (Tadao Uematsu/Yuji Ide/Shintaro Kawabata/Tomoki Nojiri) was classified a lap behind, 2nd in class, and 12th overall – but they ran on the same lap as the #22 Kizuna Audi for much of the final hours. Despite coming to a stop late, the #65 Rebellion Mars RS3 LMS (Toshiro Tsukada/Masanobu Kato/Masato Shimoyama/Sakon Yamamoto/Daisuke Hasegawa/Taketoshi Matsui) held on to 3rd in class (21st overall).

The other landmark story of this race was a double-debut victory for Rookie Racing’s new models, the Toyota GR Supra GT4 in the ST-1 class, and the Toyota GR Yaris in the ST-2 class. 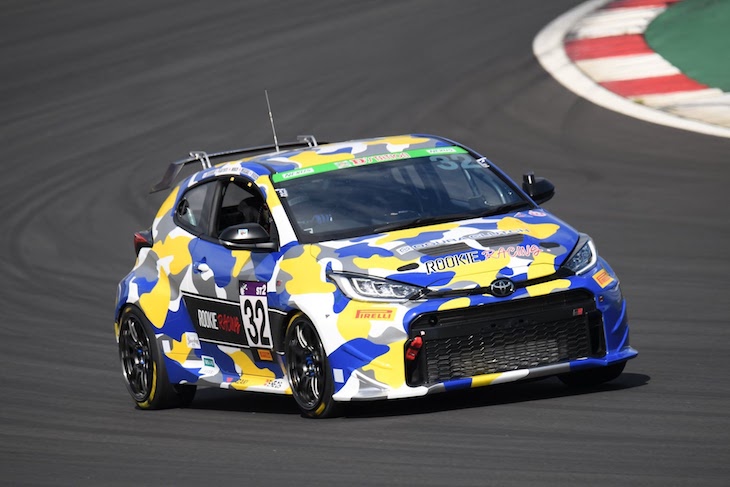 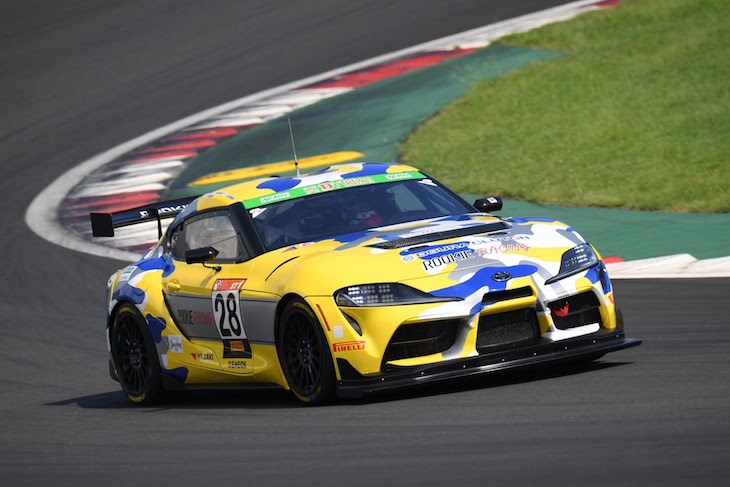 Rookie Racing’s #28 GR Supra GT4 – running in a class apart from the other FIA GT4 cars – had to take on a late stop for a splash of fuel with 17 minutes left and temporarily conceded the lead, but would ultimately take back the position and seal the win in the ST-1 class. Drivers Naoya Gamou, Daisuke Toyoda (son of Akio), Yasuhiro Ogura, Shunsuke Kohno, Hisashi Yabuki, and reigning Super GT GT500 champion Kazuya Oshima finished 8th overall.

The win was poignant for the younger Toyoda, who like his father took a class win. And for Ogura, the president of the Ogura Clutch company which had also sponsored veteran Japanese superstock motorcycle rider Tetsuro Iwasaki. 43-year-old Iwasaki lost his life during a race at Sportsland Sugo last month, and the team’s drivers carried stickers on their helmets with Iwasaki’s number 70 to honour the fallen rider.

2nd in ST-1 and 10th overall was the #38 Advics muta racing Lexus RC F (Makoto Hotta/Ryohei Sakaguchi/Yuui Tsutsumi/Sena Sakaguchi), and 3rd in class, 15th overall, was the #12 FMR Porsche Cayman GT4 (Mika Salo/Kosuke Matsuura/Max Salo/Katsuhiki Kumabayashi/Masatoshi Uesugi/Yuya Hiraki) The elder Salo, who has a strong bond with Japan through his racing career was solid in his return to racing for the first time since the 2016 Bathurst 12 Hours – mainly to support his 18-year-old son Max. 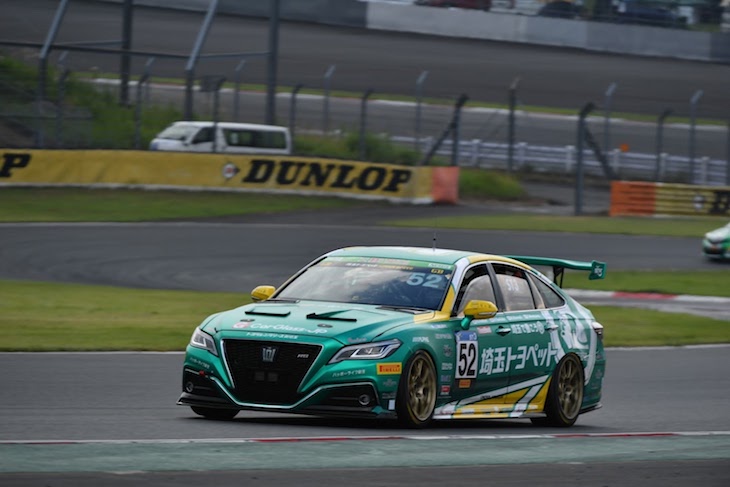 The debut win for Toyota’s prestigious luxury sedan, a badge that had once won the 1957 Mobilgas Rally Australia way back in the day, echoes GreenBrave’s debut victory with their GR Supra GT300 in Super GT at Fuji back in July, and like that victory, Yoshida and Kawaai played a major role, while the ageless Hattori continued to display sufficient skill at the wheel. 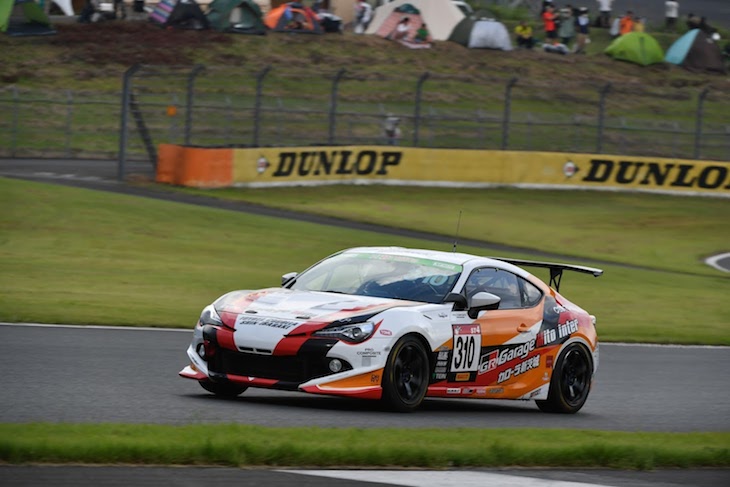 In a depleted ST-4 class, top honours went to the #310 GR Garage Mito Inter Toyota 86 of Rintaro Kubo, Shinya Hosokawa, Sho Tsuboi, and Kota Matsui, finishing 22nd overall. The race turned in the final hour when the #13 Endless Sports 86 of Ryo Ogawa, Ritomo Miyata, Takamitsu Matsui, Masaya Hanazato, and Togo Suganami retreated to the garage with just under two hours left in the race, dropping them five laps off the lead in the end, 2nd in class. The #884 Hayashi Telempu Shade Racing 86 (Katsuyuki Hiranaka/Yuji Kunimoto/Hiro Hayashi/Keishi Ishikawa/Dai Mizuno) was a further four laps down, 3rd in class. 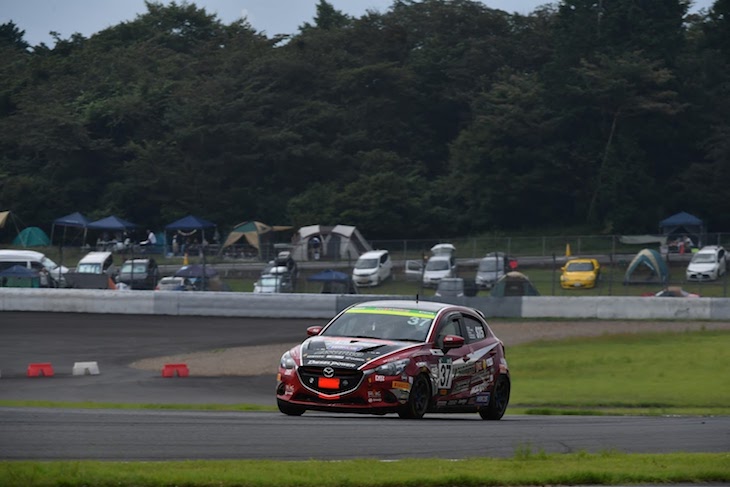