NKPP Racing by Bas Koeten Racing has secured a historic win at the inaugural Hankook 16H Hockenheimring by becoming the first-ever Porsche 911 Cup competitor to win a 24H SERIES race outright, albeit a race with a GT3 entry limited to two cars. 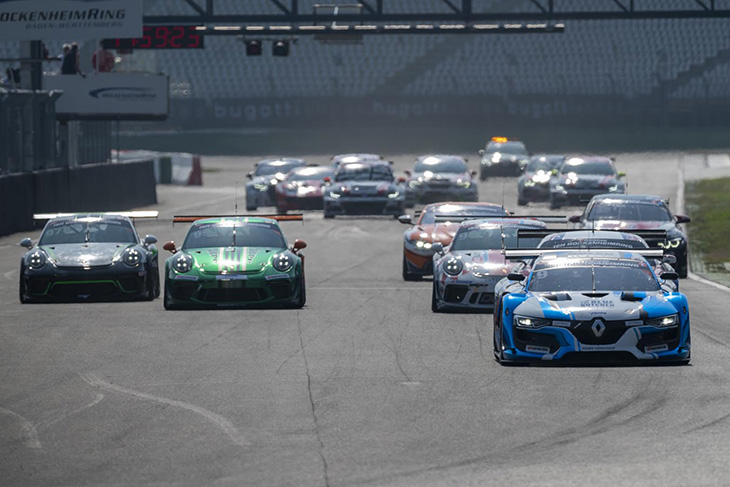 The race winner completed 470 laps of the 4.574km Hockenheimring en-route to the chequered flag, one more than 2nd placed DUWO Racing, which needed a splash-and-dash for fuel on the penultimate lap.

The result marks the first time a Porsche Cup car has ever taken an outright win in the 24H SERIES powered by Hankook. The previous best result was 2nd overall, which Motorsport Services managed with its Porsche 997 Cup at the Hankook 12H Hungary in 2013. 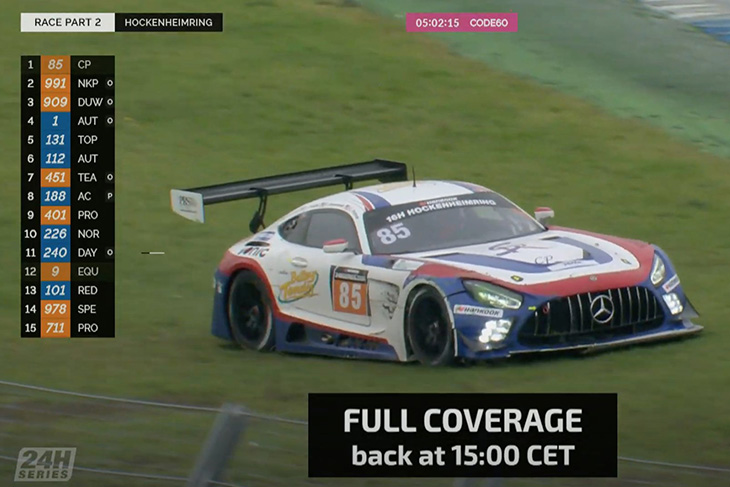 The race took a dramatic turn shortly before three-quarter distance when long-time race leader CP Racing went off at Sachs corner. The Mercedes-AMG GT3 Evo (#85, Charles Putman / Charles Espenlaub / Joe Foster / Shane Lewis) had already pulled six laps clear of the chasing pack by this point but lost more than 45 minutes in the pits with front end damage. Though the Mercedes eventually re-joined in 3rd place and was catching the leaders by more than 4s per lap, issues with the radiator meant CP Racing lost another 35 minutes in the pits later on. This ultimately dropped the GT3 class winner to 7th overall at the flag and 4th in the GT division. 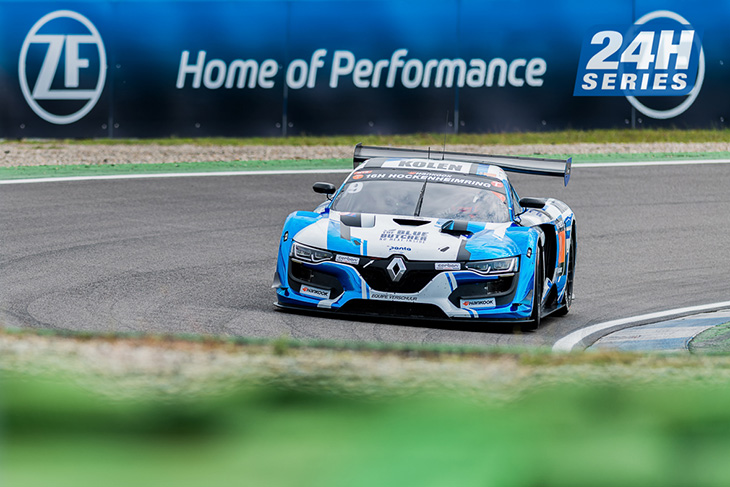 Issues similarly befell the Equipe Verschuur Renault R.S.01 GT3 (#9, Harrie Kolen / Erik van Loon / Mike Verschuur), which took outright pole position for the event on Friday, led for much of the opening four hours on Saturday, and was setting the pace after half distance as well. Two suspected driveshaft failures though, one on Saturday, one today, meant the Dutch team eventually retired from the event.

The final 991-class entrant, the Speed Lover Porsche 991-II Cup (#978, Eric Mouez / Jeroen Kreeft / Rolf Lietart / Dominique Bastien), also suffered problems, losing much of its pace after making heavy contact with the barriers on Saturday afternoon. That, plus a lengthy pit stop for repairs on Friday, meant the Belgian team could do no better than 3rd in-class. The teams’ third category podium in succession though means Speed Lover does move to the top of the 24H Series Europe Overall GT Teams’ standings, four points clear of nearest rival Herberth Motorsport. 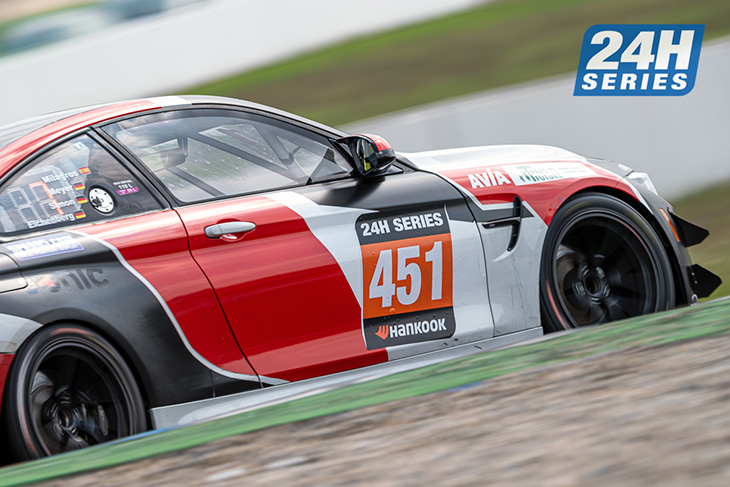 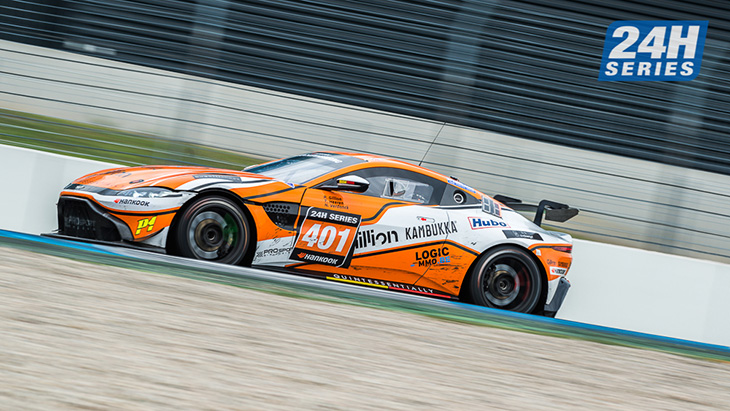 Its nearest rival, the PROsport Racing Aston Martin Vantage AMR GT4 (#401, Nico Verdonck / Rodrigue Gillion / Tom Heeren), had good pace earlier in the day but lost almost an hour in the pits when its right rear assembly collapsed, causing a puncture and a spin on the exit of Sachs. The Aston nevertheless collected 2nd in-class and 5th in the GT division.

Reigning Overall TCE Teams’ champion Autorama Motorsport by Wolf-Power Racing also made history this afternoon at the Hankook 16H Hockenheimring by becoming the first TCR entrant to secure a spot on the outright podium at a 24H Series GT/TCE event. 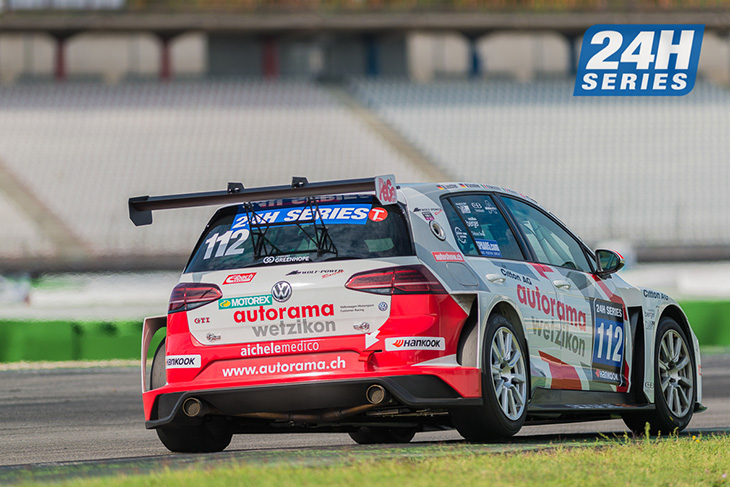 Although TCR teams have secured overall podiums at TCE-only races in the past, this weekend marks the first time that a TCR competitor has finished on the podium of a 24H SERIES powered by Hankook event that features both the GT and TCE divisions.

The Autorama Motorsport by Wolf-Power Racing Volkswagen Golf GTi TCR (#1, Constantin Kletzer / Jasmin Preisig / Christoph Lenz / Rhys Lloyd / Yannick Mettler) was aided by incidents for the GT3 frontrunners, and also had to weather an incredibly close battle between the top three runners in TCE in the closing stages. In the end, Rhys Lloyd collected the chequered flag for Autorama Motorsport by Wolf-Power Racing, the #1 Volkswagen having completed 450 laps of the 4.574km Hockenheimring en-route to the team’s second class win of the season.

Victory had looked set to go to the sister Autorama Volkswagen (#112, Alberto Vescovi / Roberto Ferri / Miklas Born / Marek Schaller / Benjamin Leuchter), but a bizarre incident in which the onboard fire extinguisher discharged in the cabin cost the team several laps to rectify. Having secured its fourth consecutive TCR podium of the year though, the #112 maintains its advantage at the top of the Overall TCE Teams’ championship standings.

The TOPCAR Sport Cupra TCR (#131, Fabian Danz / Karen Gaillard / Kai Jordan) rounded out the TCE podium, despite almost being eliminated on the very first lap of the race in a bizarre collision with AC Motorsport and Red Camel-Jordans.nl. So close was the battle for the podium, the CUPRA finished just 47s behind the top two after 16 hours of endurance racing.

Nordschleife Racing meanwhile (#226, Guillaume Roman / Daniel Waszczinski / Michel Sallenbach) had finished two laps ahead of its Dutch rival, but a start procedure infringement meant the Ligier JS2 R was penalised four laps after the race, and has thus been classified 2nd in TCX and 5th overall in the TCE division.

The Red Camel-Jordans.nl Cupra TCR (#101, Ivo Breukers / Luc Breukers / Steven Liquorish) finished a hard-earned 6th in the TCE division. Having been indirectly involved with the opening lap accident on Friday, the CUPRA suffered further damage with an off-track moment in the wet later that afternoon, the effects of which were still being felt during an extended pit stop this afternoon.