Robin Liddell and Gabby Chaves made the most of the final restart Sunday in the VP Racing Stay Frosty Coolants 240.

Both drivers shot from third to first in their classes after the restart with 56 minutes left in the four-hour race, then went on to claim victories in the IMSA Michelin Pilot Challenge race at Michelin Raceway Road Atlanta.

Liddell drove past Jeff Westphal and Eric Foss to take the lead shortly after the final restart, but relinquished it briefly during the final cycle of pit stops. When Gregory Liefooghe pitted with 15 minutes left, Liddell and the #71 Rebel Rock Racing Chevrolet Camaro GT4.R he shared with Frank DePew and Andrew Davis were back in the lead and headed for the overall and GS class victory.

“I really had the bit between my teeth all weekend,” Liddell said. “It was just an outstanding job by the whole crew here at Rebel Rock Racing. Frank’s come on tremendously with his driving. It was great to be back with Andrew again ’cause we’ve had so many great races over the years. It was just good strategy. I mean, I couldn’t fault anything.” 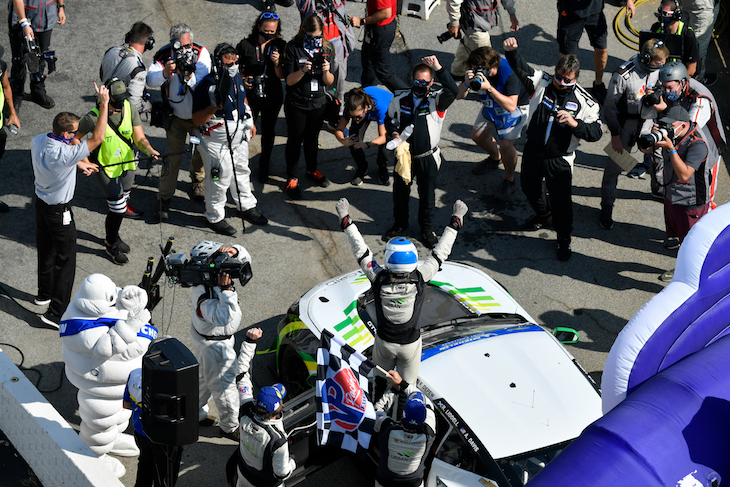 While Liddell was driving to the lead during the final restart, so was Chaves in the TCR class. He passed Mathew Pombo and Parker Chase, then carefully saved fuel to make it to the finish line first in the #33 Bryan Herta Autosport with Curb-Agajanian Hyundai Veloster N TCR he shared with Ryan Norman.

Chaves’ run to the front after the final restart wasn’t necessarily part of the initial plan.

“It seemed like our teammates (Chase and co-driver Spencer Brockman) might have been on a different strategy, so I was just trying to use them as pace and save extra fuel,” Chaves said. “Then it looked like they changed strategies to fuel save, which was holding me up quite a bit, so I went for the overtake, got it done and just tried to drive my race. I knew I could save fuel a little bit better than them, it seemed. I knew I had a better pace and could probably hit the (fuel) number to get home.”

For Liddell, fuel wasn’t as much an issue as the heat. At times late in the race, his left hand could be seen outside the car attempting to direct fresh air into the cockpit.

“It’s so friggin’ hot, to be honest, and I’ve got no cool suit,” said Liddell, 46. “I’m not a young guy anymore, so I get pretty hot. It’s always been a hot car and we haven’t quite mastered the driver cooling element of it yet, but I’m used to it. I’ve done enough races in these Camaros over the years to know what it feels like, so that wasn’t about to hold me back.” 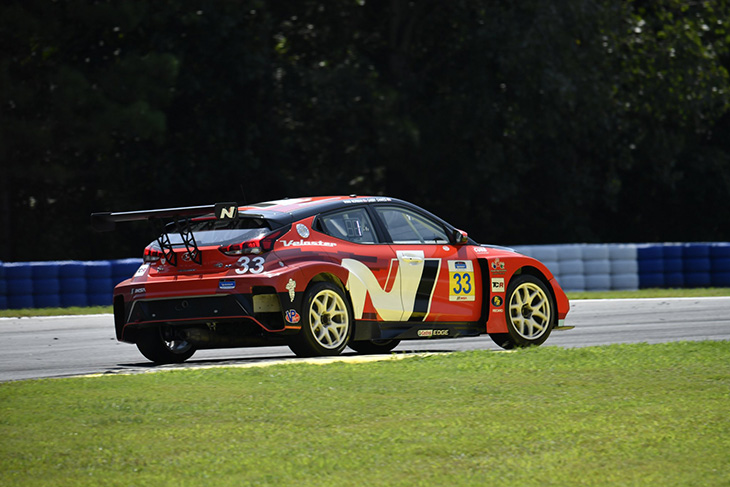 After Chaves finished off the winning run, he credited Norman for a starting stint that put the #33 car near the front. Norman said he was just trying to avoid mistakes.

“During my run, I was just trying to get through the start nice and cleanly,” Norman said. “The Alfa had really good pace on the straightaways from us, so I knew at some point I was going to have to get around him. Then he ended up having an issue later on in the race. It was just how traffic worked out with the GS cars on the restarts. I was just able to kind of pinch my way in between all the cars, so that worked out well for us.”

Foss, in the #56 Murillo Racing Mercedes-AMG GT GT4, was set to finish second behind Liddell but ran out of fuel on the final lap and settled for 10th in GS. That gave the runner-up spot to Seb Priaulx in the #22 Multimatic Motorsports Ford Mustang GT4 that he co-drove with Scott Maxwell. Trent Hindman was third in the #7 Archangel Motorsports Porsche 718 Cayman GT4 Clubsport shared with Alan Brynjolfsson.

While the Rebel Rock Camaro and the BHA Hyundai were scoring important victories, the championship leaders in both classes encountered trouble and finished back in the field. The #35 Riley Motorsports Mercedes-AMG GT GT4 co-driven by Jim Cox, Dylan Murry and Colin Braun stopped on the edge of the track with a mechanical issue and was struck during the ensuing full-course caution by the #65 Murillo Racing Mercedes-AMG, eventually finishing 21st in GS. The #21 BHA Hyundai shared by Mark Wilkins and Harry Gottsacker encountered fueling issues and finished ninth in TCR.