Seizing an unexpected opportunity, the #38 ZENT Toyota GR Supra of Yuji Tachikawa and Hiroaki Ishiura took pole position during a damp Saturday Qualifying session for the fourth round of the 2020 Autobacs Super GT Series, the Fujimaki Group Motegi GT 300km Race. This is the 24th career pole position for 45-year-old Tachikawa, the ace driver and team director of TGR Team ZENT Cerumo, who extends his all-time career record.

This late-summer excursion to Motegi already promised unpredictability. It was the first time that the series would visit the 4.8 kilometre road course during the summer since 2008 before the annual round at Motegi was moved to the end of the calendar and shortened to 250 kilometres. It’s also the first time since ‘08 that Success Ballast would be a genuine factor. And, with rain in the forecast, that also added another layer of unpredictability during qualifying.

Intermittent, light rain added just enough of a variable during practice, where the #19 WedsSport Advan GR Supra (Yuji Kunimoto/Ritomo Miyata) was fastest in the morning’s practice session. During Q1, the blue and yellow Toyota backed up its practice pace, and Miyata, in just his fifth GT500 race weekend, set the fastest time in the first leg of qualifications, ahead of the #64 Modulo Honda NSX-GT of fellow GT500 newcomer Hiroki Otsu, by less than a tenth of a second.

With the impact of Success Ballast, including the fuel flow restrictors in GT500, both the #36 au TOM’s GR Supra (Yuhi Sekiguchi/Sacha Fenestraz) and the #37 KeePer TOM’s GR Supra (Ryo Hirakawa/Nick Cassidy), numbers one and two in the GT500 points tables, weren’t able to get out of Q1. Hirakawa, limited to 91.8kg/h of fuel, qualified 13th, and Fenestraz, limited to 88.6kg/h, qualified 14th.

But there was drama after Q1. The #16 Red Bull Motul Mugen NSX-GT of Ukyo Sasahara had gone off into the gravel at the 90-Degree Corner (Turn 11), bringing out a local yellow. Sasahara would finish the session 5th. But three cars had their fastest lap times deleted for not slowing down sufficiently in the yellow flag zone, and they included the #3 CraftSports Motul Nissan GT-R of Katsumasa Chiyo, who had initially qualified 7th, and the #23 Motul Autech GT-R of Suzuka winner Tsugio Matsuda, who was 9th. The removal of their fastest laps sent them back to 10th and 11th respectively on the grid for Sunday.

And that meant that Hiroaki Ishiura, who was originally 10th-fastest in Q1 in the #38 ZENT Supra, was the last driver to advance out of Q1 and into Q2 after all, joining all five Hondas, the WedsSport Supra, and the #39 Denso Kobelco SARD GR Supra (Yuichi Nakayama/Heikki Kovalainen).

In the interval between Q1 and Q2, the drizzling rain became harder, hard enough for teams to have to switch to wet tyres after one lap on slicks, except for the #38 ZENT Supra of Tachikawa, which came in after two laps. This would have left Tachikawa with one less lap to bring his Bridgestone Potenza rubber up to temperature.

With two minutes left, Nirei Fukuzumi set the initial benchmark in the #8 ARTA NSX-GT, before Koudai Tsukakoshi took the top spot in the #17 Keihin NSX-GT, breaking the 1 minute, 45-second barrier with a 1’44.079.

Then with less than a minute left, Tachikawa set the fastest third and fourth sectors on his flying lap, moving to the top spot with a 1’43.878. Of course, it wasn’t straightforward: Tachikawa was under investigation from the stewards for an incident with the WedsSport Supra of Kunimoto at the 90-Degree Corner. The two cars made contact as Tachikawa looked to get around Kunimoto on track, which sent Kunimoto wide and nearly into the gravel, compromising his chance to attack in the final minutes of Q2. 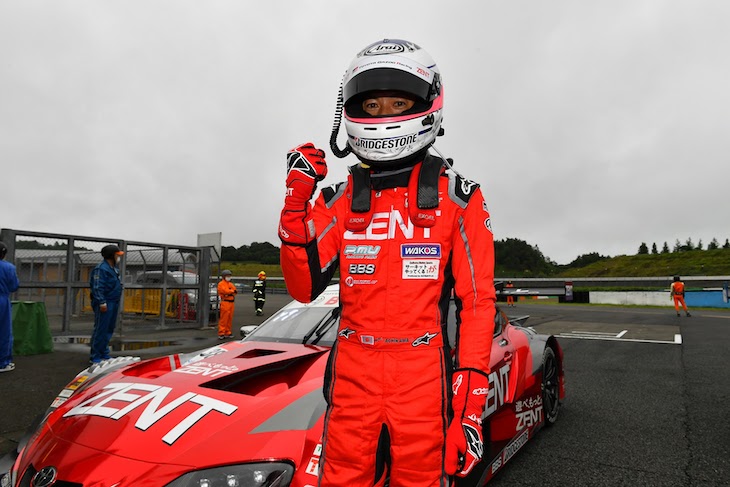 The stewards gave Tachikawa a warning for the contact, and his top time stood for career pole position number 24, his first since the 2018 Fuji 500km, and all of which have come for Cerumo, where he is Team Director in Super GT and Super Formula, and co-driver Ishiura is an Executive Director of the company itself.

“In Q1 we just barely qualified for Q2, and Ishiura was actually angry about it when he got back to the pit,” laughed Tachikawa during his post-race press conference. “So, our Q2 started like a consolation match for us, but in the constantly changing conditions of today’s weather we chose to run on slick tires. But then all of the other teams were suddenly returning to the pits to change to rain tires… so in order to make the conditions the same for everyone, I returned to the pit one lap later.”

“Honestly, I wasn’t confident that I could get pole position. Since that meant I would only have two laps to get a good time, I went all-out. But, even in these conditions, the car felt good and the rain tires performed well for us, and that is why we won pole position,” added Tachikawa. 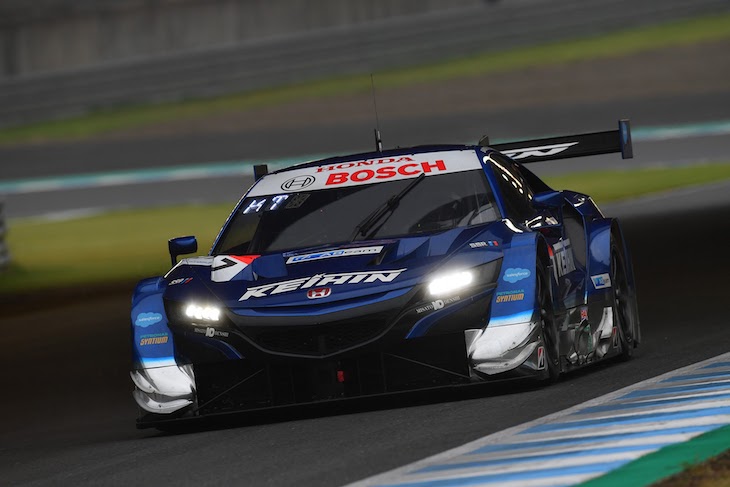 Honda will be pleased to have all five of their cars in the first seven positions at their second “home circuit”, closer to the HRD Sakura facility where the front-engined NSX-GT was developed. Round 2 winners Tsukakoshi and Bertrand Baguette will start 2nd on the grid after struggling for pace at the last round at Suzuka Circuit.

The #8 ARTA NSX-GT of Fukuzumi and Tomoki Nojiri qualified 3rd, Fukuzumi ended up losing time on his last flying lap that cost the reigning GT300 champion a shot at jumping into the front row. The #64 Modulo NSX-GT of Takuya Izawa and rookie Otsu will start 5th after making Q2 for the second consecutive race.

Carrying the “Level 1” fuel flow restrictor, the #100 Raybrig NSX-GT (Naoki Yamamoto/Tadasuke Makino) did well to qualify 6th, while the #16 Red Bull NSX of Sasahara and Hideki Mutoh couldn’t find the pace out of their Yokohama Advan tyres once the rain intensified, and starts 7th.

In amongst the fleet of Hondas, the #39 Denso Supra of Kovalainen & Nakayama qualified 4th, and after the contact with Tachikawa and the Yokohama tyres suffering for pace in heavier rain, the #19 WedsSport Supra could only manage 8th on the grid. The #14 Wako’s 4CR GR Supra (Kazuya Oshima/Sho Tsuboi) ended up last behind the cut line, starting 9th, ahead of the #3 CraftSports GT-R of Chiyo and Kohei Hirate, best of the Nissans, in 10th after the post-Q1 penalty. 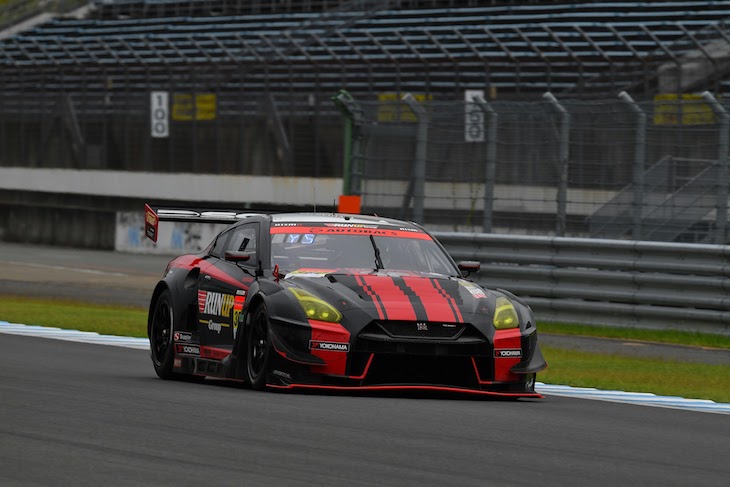 In Q1, Group A was led by an incredible effort from championship leader Hironobu Yasuda in the Dunlop-clad #11 Gainer TanaX GT-R, which was carrying the maximum 100 kilogrammes of Success Ballast! Sena Sakaguchi led Group B in the #96 K-Tunes Lexus RC F GT3, another Dunlop runner.

While Yasuda and co-driver Katsuyuki Hiranaka moved on to Q2, their two closest challengers in the standings did not. Hiroki Yoshida and Kohta Kawaai will start 23rd in the #52 Saitama Toyopet GreenBrave Toyota GR Supra. Masataka Yanagida went off in the gravel in his #2 Syntium Apple Lotus Evora MC, bringing out a red flag and removing his lap times from the board. Yanagida and Hiroki Katoh will now look to come from 30th and last on the grid.

With less than 3 minutes left in Q2, the rain was letting off just enough to allow the track to dry, and dry rapidly, and the top time would change eight times until the end of qualifying.

Aoki, the 2001 GT300 Champion, was finding incredible speed on his first flying lap, breaking the 1 minute 50 barrier with a 1’49.689. As the chequered flag fell, another challenger had risen from the pack: The #25 Hoppy Porsche 911 GT3-R of Kimiya Sato, in Q2 for only the second time this season after qualifying no better than 16th in the first three rounds.

Sato came around on his final flying lap to take provisional pole on a 1’49.448, with a fastest final sector. But Aoki had one more lap in him, and was fastest through all of the first three sectors, then fastest in the final sector, to take the top spot back on a 1’48.546!

This is the first time ever that Tomei Sports, established in 1985 by former Tomei Motor Company employee Keikichi Nakano and entering Super GT from 1994-1996 and from 2007 to the present, have ever been on pole position for a JGTC/Super GT race. 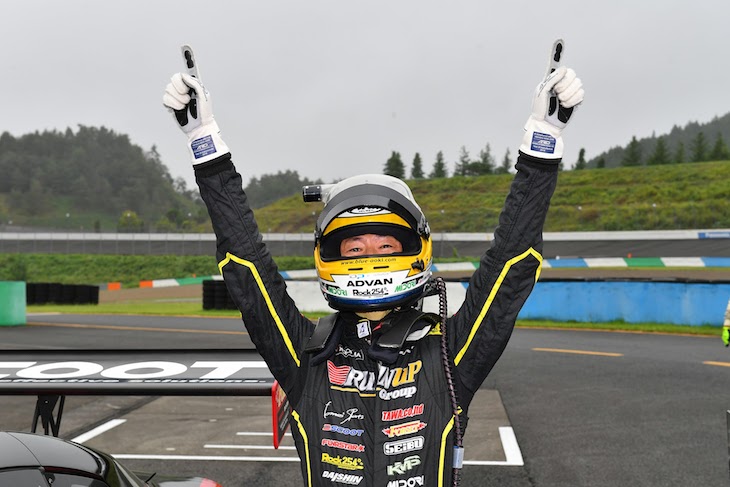 And for Aoki, who won the 2001 GT300 title alongside Noboyuki Oyagi at Team Daishin, it’s his first pole position in Super GT in eleven years, since the 2009 season finale at Motegi – driving a Ferrari F430 in Team Daishin’s last Super GT appearance. 10th for Aoki in his career, now joining Shinichi Takagi (13), Kota Sasaki (13), and Hiroki Katoh (12) as the only drivers to reach double-digits.

“I am really so very happy! I have even forgotten my last pole position,” said Aoki, laughing. “The conditions were the same for everyone, but it was tough because the tires wouldn’t warm up on the wet track, but thanks in part to the qualities of the GT-R, being strong in bad track conditions, I think we were able to win this pole position.”

While nine-tenths down on pole position in the end, Hoppy Team Tsuchiya will have even more positive morale throughout their garage as Sato and Takamitsu Matsui qualified on the front row for the first time with their new 991 Typ-2 Porsche. Tsuchiya Engineering hasn’t scored a point this won since the 2017 Autopolis round, and Porsche is currently on an even longer winless drought, going back to November 2012 at Motegi. 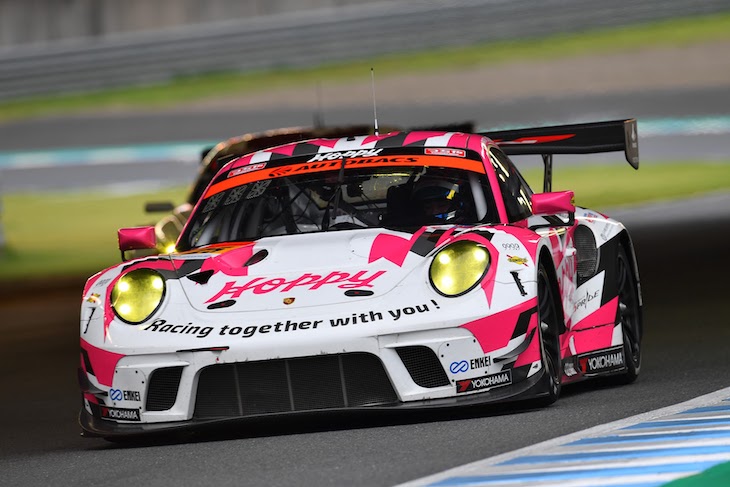 Behind the all-GT3 front row, it’s an all-JAF-GT300 second row, headed by the #31 Toyota GR Sport Prius PHV apr GT (Koki Saga/Yuhki Nakayama) in 3rd, and the #61 Subaru BRZ R&D Sport (Takuto Iguchi/Hideki Yamauchi), fastest in practice, in 4th. The #88 JLOC Lamborghini Huracán GT3 (Takashi Kogure/Yuya Motojima) scores its best start of the season in 5th, ahead of the #96 K-Tunes RC F of Sakaguchi and Morio Nitta in 6th.

Another stellar result came from arto Ping An Team Thailand and drivers Masahiro Sasaki and Yuui Tsutsumi. 11th place for the #35 arto RC F GT3, in just the team’s second Q2 appearance as a full-time entry, will be the Thai squad’s best-ever starting position for a Super GT race.