Whilst the debuting KTM X-BOW GTX Concept crossed the line as the winner in its local race at Red Bull Ring, with Stefan Rosina and Patric Niederhauser at the wheel of the Reiter Engineering-developed car, the post-race technical checks saw the car disqualified with non-compliant brake disc size. Reiter Engineering has lodged an appeal to the decision.

While waiting for the result of the appeal, the Teo Martín Motorsport McLarens currently grab a 1-2, with Miguel Ramos-Henrique Chaves declared winners of the race. 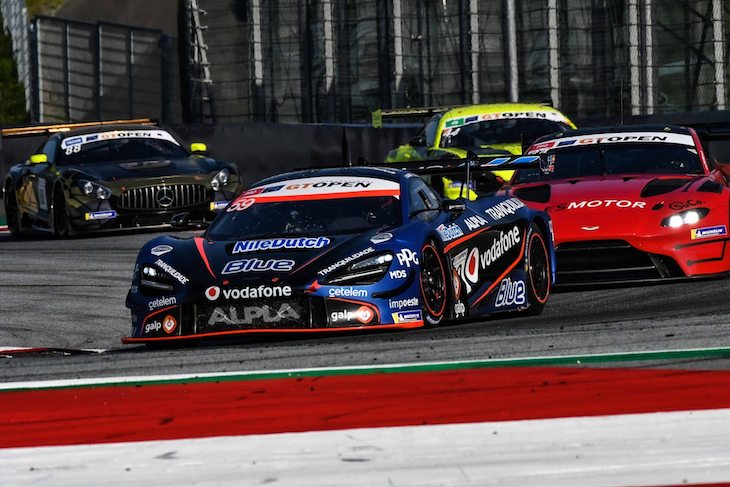 In his return to the GT Open, Fran Rueda was second, together with Marcelo Hahn, in the other 720S of the Spanish squad, after taking pole and dominating the first stint.

A safety- car intervention right before the opening of the driver change window erased the advantage (15 seconds) built by Rueda, and benefited the Slovak-Swiss duo of KTM.

If confirmed, today’s win would be the 20th for Miguel Ramos in the GT Open, putting him alongside Andrea Montermini at the top of the ranking of drivers with most race wins. Whatever happens with the appeal, he and Chaves are certain of getting the points of victory in any case, as the KTM appeared as a G3 guest car, and of extending their lead in the standings to 11 points on Prette-Abril (AF Corse APM Monaco Ferrari), today 5th.

Hahn-Rueda won the Pro-Am class (with the Brazilian strengthening his lead in the class standings), ahead of the debuting RAM Racing Mercedes-AMG of Sam De Haan- Callum Macleod and the Optimum Motorsport McLaren of Nick Moss-Joe Osborne.

In the Am class, the GetSpeed duo composed of Florian Scholze-Jens Lieberhauser controlled the race, taking a fourth seasonal win ahead of the other Mercedes of Alex Moiseev- Alexey Nesov (AKM Motorsport) and of Christian Hook-Manuel Lauck (SPS Automotive).

At the start, Rueda, who took pole on his return to the championship, kept the advantage while the KTM of Rosina stole second from Prette. They were followed by De Haan, soon passed by Millroy, then Ortelli, who had rubbing and contact when passing Ramos on lap 2, which would earn him a reprimand. Ramos and Yoluc completed the initial top-8. The Turk also getting a warning for breaking grid formation. In Am, Scholze was a solid early leader ahead of Leutwiler, Moiseev and Hook.

In the lead, Rueda steadily increased his advantage by a second per lap, ahead of a compact trio formed by Rosina, Prette and Millroy.   On lap 10, Ramos repassed Ortelli. On lap 13, Millroy started attacking Prette for third, while there was a big duel for 10th between Moss and Krupinski, who passed each other a couple of times. The Pole was passed also by Leutwiler but hit the Swiss when he tried to regain his position (lap 16) sending the Porsche into the gravel and prompting a Safety-car. He would be dealt a drive-through.

The driver change window opened on lap 19, with Prette and Ramos amongst the first diving into the pits. Rueda stayed on track as long as possible, rebuilding a gap of 9 seconds on Millroy and Ortelli. When all stops were finished, Hahn led but had Niederhauser on his heels, the Swiss passing on lap 27.

Third, 3 seconds behind, was Macleod, then Chaves, Iribe, Abril and Negro. Liebhauser kept the advantage in Am, but with Nesov only 4 seconds behind. It was very close between the first four, covered by 6 seconds, with Chaves passing MacLeod for third (lap 33). A superb duel between Osborne and Eastwood for P7, with the Aston prevailing and also passing Iribe later, although a 5-second penalty for track limits would see him drop to a final P10. In the meantime, Chaves passed Hahn for second and starts a fruitless charge on the KTM, which initially at least won by 3.5 seconds until the exclusion.