Here’s the first of several DSC Retro features for Le Mans week – this one from 2003, and an in-depth look at an iconic, Le Mans winning car from Alan Lis.

Team Bentley produced an all-new race car for the 2003 Le Mans 24 Hours. Peter Elleray, the team’s chief designer, and Gene Varnier, the assistant chief designer, spoke with Alan Lis about the project, at the Le Mans Test Day in 2003. The car would, of course, go on to dominate Le Mans that year. 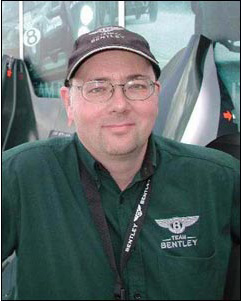 Peter Elleray (left): Probably a lot longer ago than most people realise. Proper design work started in August 2001 but I had a scheme for a new car even earlier than that, before the 2001 race, that didn’t get ‘fleshed out’ until after that first race.

It was a very basic layout that didn’t really look like the 2003 car, but most of the ideas like running torsion bars at the rear (and everything else for a smaller rear end) were pretty much in place from day one. In August 2001 Gene drew most of the rear end and I did an early layout of the chassis, which subsequently changed a bit, but the basic front end with torsion bars and dampers was on that original scheme. The shape of the cockpit and the aerodynamics changed a bit after that, once we got into the wind tunnel, but the basic concept was there at that time

So why has it taken so long to produce a car?

PE: A decision was made to update the 2001 car for the 2002 race so that occupied everybody’s efforts for about six months.

Gene Varnier: We didn’t get back into the new design until February 2002 because we had to wait for the go-ahead to do a completely new car, but by May 2002 we were doing wind tunnel work for the new car.

PE: It’s the next generation car and it’s very different from the previous models, with the main influence coming from what’s been going on in the design of open-top prototype cars, particularly in the management of the air exiting the front diffuser and trying to make that work on a coupe body with doors. Of course, the mechanical design had to be reworked for Michelin tyres.

GV: In fact, I had schemed and detailed uprights for Dunlop tyres and issued the drawings before the Michelin deal came along, so we had to stop that work and revise the geometry for a new tyre manufacturer. The changes needed to produce the characteristics required by the Michelins meant new pick up points on the gearbox and the chassis and manufacturing was already fairly well progressed on those elements by then. 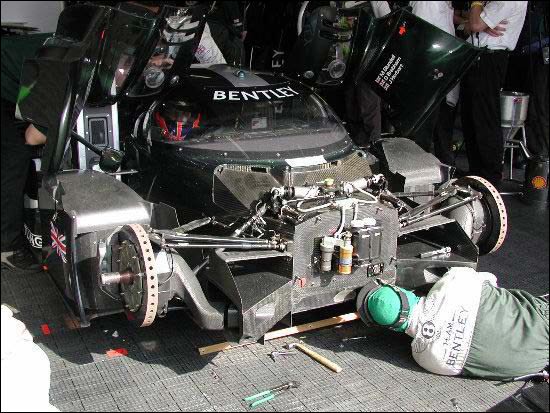 The 2003 car is obviously a departure from the previous model in the aerodynamic approach. What advantages has this provided?

PE: The aerodynamic package is such that we can run the car in a lot of different ways. We can use more downforce with same drag as the old car, low drag or a range of other options. In aerodynamic terms, the old car was limited by its front end: the new car has a front end that can offer a lot more if we choose to use it or we can trade it off for running a lot less drag.

The 2003 car is a lot less sensitive to ride height and rake than the old car. It probably has lower reserves in terms of cooling, the older car was well over cooled, while the new one is closer to the edge in that respect.

Where was the wind tunnel programme done?

PE: At the Swiss Aircraft Industry tunnel in Emmen. The team doesn’t have a dedicated aerodynamicist so I did that work myself. If you have a good look down the Le Mans pit lane it’s clearly nothing revolutionary. We had some help from Audi with collecting test data but as far as coming up with an aerodynamic concept and developing it, I did that. 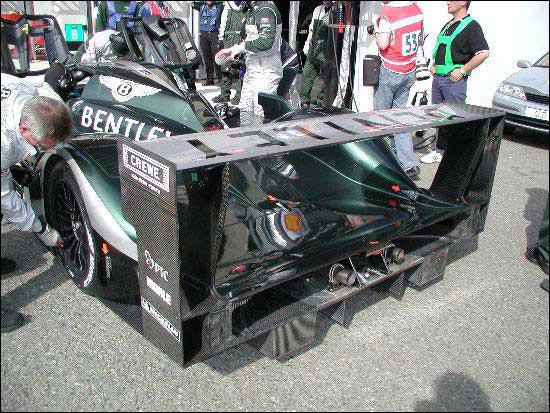 What gains have you made in efficiency over the older car?

PE: I wouldn’t like to reveal any figures and in fact, it would be difficult to do that because in some parts of the aero map big gains have been made, in other parts less or no gain. The old car was pretty respectable in the Porsche curves, which is the high speed aero part of the track, and on top end, but there were other areas that weren’t as good as they could have been so those were where we did a lot of work.

Was the new front end configuration, with air flowing through the front suspension, arrived at early on in the design process?

PE: I had two options and that was one of them. On a coupe with a wider chassis and a turbocharged engine, you have a limited amount of space for coolers. You can’t just strap bigger radiators on because you don’t have a sufficient head of air. Really the design decided itself, if you are not going to take your cooling flow from where we had it on the original car, you end up either taking all the air from the front diffuser or creating other holes. If you do this, the only place you have holes is through the front suspension.

Are there structural differences between the 2001-2 and the 2003 cars? Presumably, you have to have a wider footbox for the 2003 car because the rule regarding that has changed since the first car was introduced?

PE: Yes, but it’s difficult to actually see that it’s wider in that area even if you stand the 2001-2 car next to the 2003 car. You do have to have a certain width of footbox at the line of the pedals, but the rules do not define their position relative to the front wheels. So long as you have the required width at the pedals you can continue to narrow the structure ahead of it

Are there other structural differences?

PE: The chassis is built in a different way to the previous car. Instead of being made as upper and lower halves, it’s more of a single unit with added roll hoops. It’s somewhat similar to an open-top car and its structure is much stronger than before. It passed the roll hoop deflection test far better than the original car did. After the test, the 2003 chassis was unmarked, whereas the original chassis, although it passed, needed remedial work afterwards. 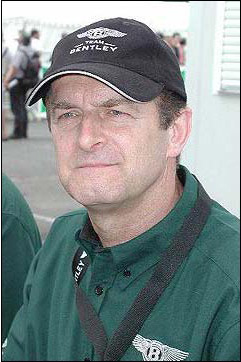 GV (right): The new chassis is bigger but the weight is the same as the previous model.

Why is the chassis bigger?

PE: The redistribution of space for machinery and man. The bell housing got shorter, the chassis got longer.

What makes up the main structure of the car?

PE: It’s very much like a formula car, as are most of the cars in the Le Mans pit lane. There’s a central chassis which houses the driver and fuel, and a nose box with the front diffuser instead of a nose box with a front wing, as you would have on a single-seater. 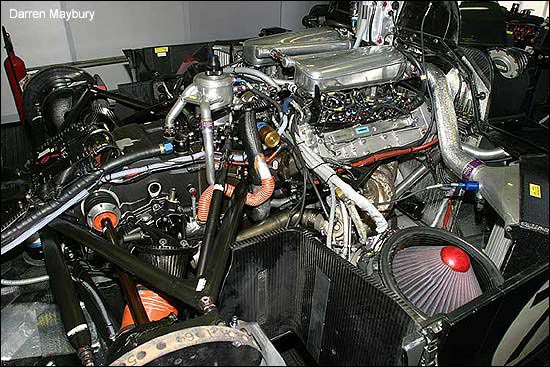 Is the engine installation stressed?

PE: In the new car the engine is fully stressed as it has been in the Audi R8 since 2000, on the older car there were support tubes linking the top of the rear chassis bulkhead to the bellhousing.

GV: The old car needed the tubes because of the layout of the chassis structure and the engine.

PE: The rear bulkhead of the new car is smaller and that places the engine mounting points closer to the outside of the tub, which makes for a stiffer installation.

GV: Packaging. We wanted them at the rear of the car so we could get the rear deck as low as possible. That’s the primary reason but if you weigh everything you probably also get a slight weight advantage by using bars rather than coil springs. The way we have them arranged is a fairly compact design, which we first came up with for the front suspension of 001 (the original car) in which the layout of the front of the chassis was so compact that there was no room for coil springs. 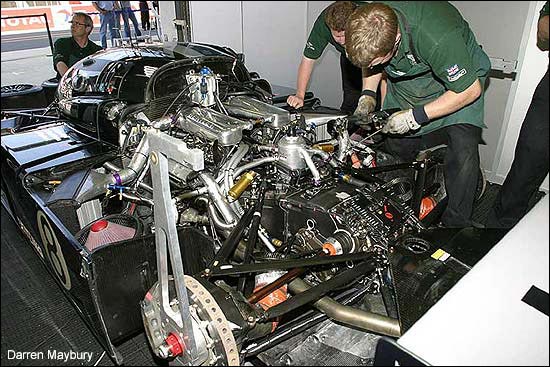 How are the bars arranged? Some F1 cars have them running vertically through the bellhousing.

GV: The system we have uses some of the same components as we have in the front suspension. The principle is the same. The bars sit horizontally on top of the gearbox and are angled at about 30 degrees from the car’s centreline when viewed from above. They are as easily adjustable as the front bars.

Where are the dampers located?

GV: At the rear, they are inside the bellhousing, again for packaging reasons to help keep the installation as compact as possible. Right from day one, we made sure that there was good provision of cooling air for them. Positioning the dampers in the bellhousing is actually quite an old idea: the 1980 Lotus 81 F1 car had that arrangement and when I was a Team Lotus soon after, that design feature was carried on through a few more models with no problems at all. So I’d say the principle has been proved. Of course, the Bentley is a closed car but it’s not that difficult to make sure that you have decent cooling.

PE: There were many other things on the car that we were more nervous about. 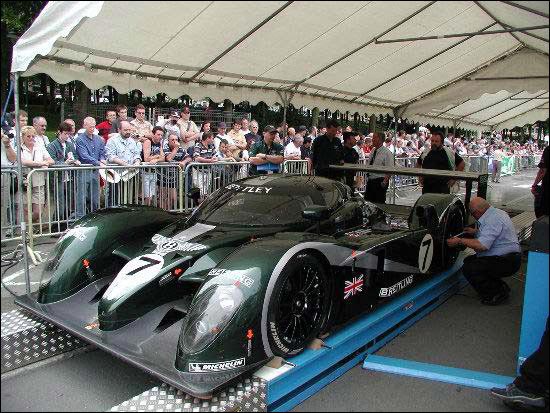 What changes have been made to the gearbox?

GV: The casing is a reasonably thorough modification, mainly due to the fact that using torsion bars meant that we didn’t need to make provision for rocker pickups. The rear wing mount is completely different to the old car so that had an influence too. It’s mounted on a transverse beam that attaches to the back of the gearbox, a bit like the Lotus 79 F1 car.

Internally we’ve gone to a version of the standard Xtrac lubrication system, the one they’ve been running on their customer gearbox. On the original car, we didn’t feel we needed that system but when we looked at it again for the new car we decided that some of the temperatures could be reduced by the increased oil flow that the system offers.

The gear cluster itself is effectively the same, but with a few small modifications that have made the shift a bit quicker.