A limited number of fans will now be able to attend Autobacs Super GT Series events once more, starting from the fifth round of the season at Fuji Speedway on 2-3 October.

GT Association (GTA) Chairman Masaaki Bandoh announced the news on Sunday morning during his pre-race press conference, that the upcoming Fuji GT 300km Race in October will welcome up to 5,000 spectators through the gates of Fuji Speedway.

“I am very happy that we have managed to hold four races without any problems, and I am looking forward to entering a new stage of racing starting with the next round at Fuji,” remarked Chairman Bandoh. “Although the number of fans will be limited, we are hoping to give those who were not able to come to the circuit so far an opportunity to watch it live.”

“We are still working out the number of people who will be able to watch the race and we are currently looking at a target of 5,000 spectators.” The number is based on the Japanese government’s decision in July to allow sporting venues to be open to 5,000 spectators for games.

Chairman Bandoh said that depending on the outcome of that race at Fuji, there could be talks of allowing a greater number of spectators for the subsequent rounds – as many as 5,000 more per race – as the Japanese government will allow sporting venues to operate at 50% spectator capacity starting from 19 September.

The PCR tests will be conducted at Tokyo Showa University Hospital, three weeks prior to the race meeting – to allow teams that have a crew member test positive to be replaced in a timely manner. Teams will now be allowed to bring up to 22 personnel to the circuit per race meeting.

Support races will now be a part of the Super GT race weekend from the next round. The FIA F4 Japanese Championship is already expecting an entry list of 34 cars for the first triple-header race meeting at Fuji – in total, there will be twelve races across four race weekends.

There were other topics to be discussed, including the balance of power in the GT300 class between the FIA GT3, JAF-GT300, and Mother Chassis vehicles. This past weekend, the fuel flow limiter for JAF-GT300 cars was removed, and Mother Chassis cars were allowed a larger diameter limiter, but they also gained between 15 to 25 kilogrammes of additional BoP weight in exchange for faster refuelling times during pit stops. The round prior, Super GT nixed the mandatory four-tyre change rule after just a single race. 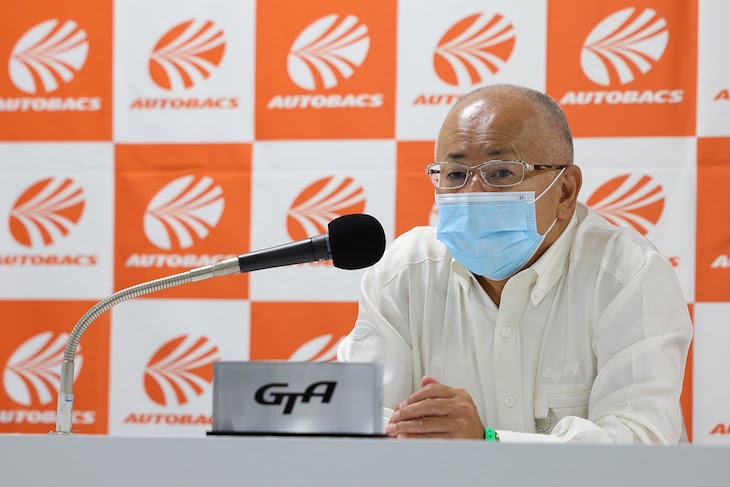 “JAF-GT300 and Mother Chassis cars can be developed to go faster and faster. On the other hand, FIA GT3 cars are subject to homologation, which makes it impossible for teams to make their own changes to the cars in many areas,” explained Chairman Bandoh. “In order for them to all be able to run and compete together, each car needs to be tailored to its own performance, and we need to be able to do it in a way that allows for flexibility as needed. It’s not going to be fair because it is a race, but we want to do it fairly. However, we don’t want to make a balance of performance adjustments to the same car at every race. It would put a lot of pressure on the teams that have to adapt to the changes.”

“Also, for next year, even though JAF-GT300 cars are allowed to evolve freely, we would like to limit the number of updates allowed per season, so as not to increase costs due to excessive development.”

As for the GTA’s relationship with the ITR, the sanctioning body of the Deutsche Tourenwagen Masters (DTM) – Chairman Bandoh will have a meeting with ITR Chairman Gerhard Berger to share their views and opinions on the future of their series, as the DTM has explored the idea of using GT3 cars or even upgraded “GT3 Plus” cars after the 2020 season.

“We would love to have future joint races with the DTM, as it would be a shame if the cooperation would come to an end after just one event,” said Chairman Bandoh, referring to the Super GT x DTM Dream Race at Fuji last November.

Chairman Bandoh confirmed that Super GT’s “Class 1+ɑ” GT500 regulations are secure through 2023, with or without the DTM being able to continue as a super silhouette touring car category on the exact same regulations.