The Aston Martin of TF Sport fought back after a difficult Saturday to take its second win of the season, as Charlie Eastwood (who also took his second pole in the series) and Salih Yoluç imposed themselves in Race 2 at the Red Bull Ring. They beat the AF Corse APM Monaco Ferrari of Louis Prette-Vincent Abril, who took second place on the final lap from Patric Krupinski-Christian Klien (JP Motorsport Mercedes) and Miguel Ramos-Henrique Chaves (TMM McLaren).

The Portuguese pair keeps the leadership in the standings, 7 points ahead of Prette-Abril and 8 of Yoluc-Eastwood. For Krupinski and Klien there was the joy of winning in ProAm, ahead of Ortelli-Negro (AF Corse APM Monaco Ferrari) and Hahn-Rueda (TMM McLaren), with the JP Motorsport and the Brazilian tied in points as Pro-Am class leaders.

In Am, there was a first success of the season for the Russian pair Alex Moiseev-Alexey Nesov, with their AKM Motorsport Mercedes, now only two points behind Am class leaders Scholze-Liebhasuer (GetSpeed Mercedes).

At the start, poleman Eastwood was passed on the outside at first corner by Chaves. Klien was third and in a full fight with Abril, who was passed by Osborne, then Macleod, Hahn, Niederhauser and Nesov, who led in Am.

Following a stewards decision, Chaves gave back P1 to Eastwood, (out of track limits during the initial overtake. The duel between the two though was still intense and the Portuguese took the lead again on lap 6.

In the following phase, the leader gap grew, up to 4 seconds by lap 12. Klien was third followed by Osborne and Abril, all very close, then Macleod, Niederhauser, Nesov and Hahn.

On lap 17 the driver change window opened and after all stops, on lap 23, Yoluc held a 5 second lead over Krupinski, 11 on Ramos, 18 on Prette and Moiseev, then Moss, De Haan, Millroy and Rueda. The last five formed a compact group that would soon start battling, with Moiseev having to concede his position but keeping the leadership in Am. 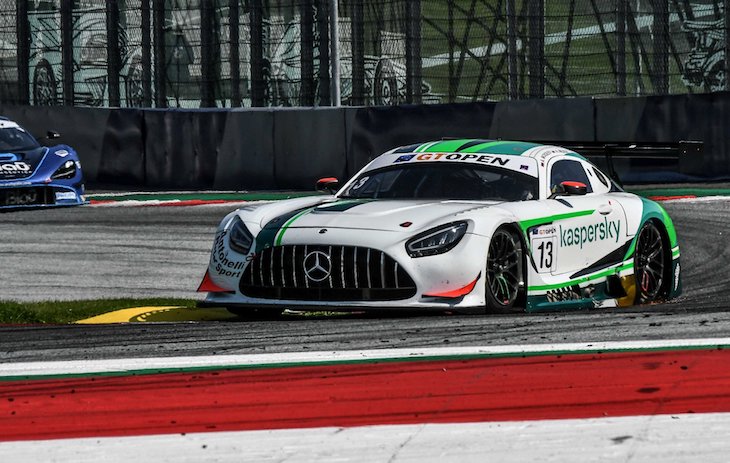 The safety-car was scrambled and the single race lap left after the re-start saw Prette pipping both Ramos and Krupinski to take second.