Here’s another in our DSC Retro series, dipping into our archive to find gems that deserve another day in the sun.

This time it’s another effort from our Founding Editor Malcolm Cracknell, this from June 2003 as the DSC crew prepared for Le Mans.

This story was part of our Preview offering, and chronicles the history of a very special car indeed!

Here’s the history of a car that won 24 Hour races at both Daytona and Le Mans.

Truly, a remarkable car with a remarkable history. It played a significant role in all thee of its 24-hour races too.

Originally numbered Chassis 288, this was one of the three cars built for the XJRs’ IMSA debut, at Daytona in 1988. It first ran at Donington Park on October 17, 1987, shaken down by John Watson. Designer Tony Southgate explains that “from the ’88 cars onwards, all the XJRs had the same monocoque. We were allowed 120-litre fuel tanks in America – 100 in Europe – so I had to redesign the tub to fit in the larger tank. That was the main change for 1988, but we were developing the cars all the time, particularly the aerodynamic details.”

Other changes for all the ’88 cars included a revised gearbox (same internals but a TWR casing, which was stronger), while there were differences between the North American and the European cars, although IMSA cars came to Europe and were changed to European spec., then sent back to TWR Inc. to be switched back to IMSA specification. American cars ran the six-litre engines, not the sevens, “Externally the six-litre was identical, but Scotty (Alan Scott) had higher octane fuel to use in the States, so it revved better, and fuel economy was better,” explains Southgate.

The designer explains the other fundamental difference between IMSA cars and European ones: “American tracks were more point and squirt, and bumpier than we had over here, and with shorter straights, you’d build in more downforce, which would come with more drag. The gearing was also lower of course. It was just a different approach. When we ran the turbos, we used to just pile on the downforce in America, the more the better. The only real exception in Europe was Brands Hatch, that circuit always needs maximum downforce.

“To find the extra downforce, we used add-on bibs and deflectors. It was one to one: a pound of downforce cost you a pound of drag. Daytona, the first race for the XJR-9s, was the exception in America: you did need top speed there. The most we had from the Jaguars was about 200 mph, and the most I saw from one of my designs there was about 203, from one of the 333 Ferraris one year.”

Southgate explains why TWR raced at Daytona, and in the rest of the North American events: “We saw them as warm-ups for Le Mans, simple as that. Having taken three cars to Daytona, we didn’t need to carry out 24-hour tests, as they all seem to do now. We’d done our endurance tests, in the Rolex 24.

“1988 was the important year: we had to win Le Mans. The programme started at Talladega in late ’87….although I didn’t go to that test. At an endurance test, you just have to cover the miles, you don’t need the designer there. All you have to do is make a note of what fails or drops off, fix it if you can, and carry on running.” 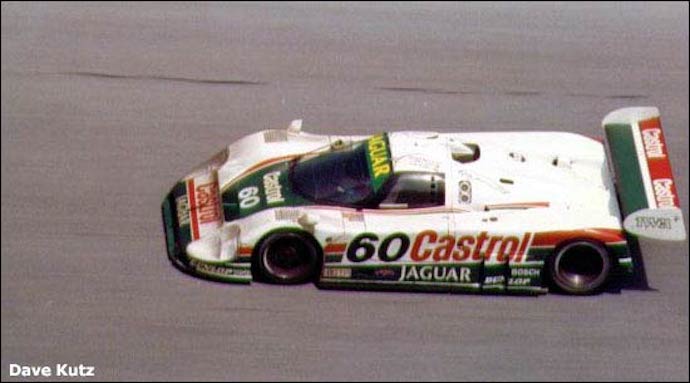 Oddly (very oddly to those of us who like to remember every race we’ve been to), Tony Southgate wasn’t sure if he actually went to Daytona in 1988. His cars definitely did, three of them. One went out with overheating (?) after 512 laps, one finished third, and XJR-9 288 won, Brundle, Boesel and Nielsen finishing just one lap clear of Mauro Baldi, Bob Wollek and Brian Redman. The Lancastrian lost time after hitting the non-finishing Jaguar, which was limping around on 11 cylinders anyway. John Nielsen was at the wheel of #60 as it eased ahead of the battered Jim Busby Porsche, and it was the V12 powered car that finished as strongly as it had started. This was almost the perfect warm up for Le Mans.

#288 stayed in North America throughout 1988, surprisingly not winning a race again that year, but scoring five second places (it retired at Sebring, above).

So the Le Mans victory in June ’88, which we’ve covered already anyway, doesn’t feature in this story.

#288 stayed in North America for most of 1989, but not all. An undistinguished set of results from February to April was followed by a ‘return home’ for its maiden race in Europe, the 1989 Le Mans 24 Hours. Having won it with a similar chassis in ’88, and with the Mulsanne Straight remaining untouched for the last time, there were only detail tweaks to be made to the ’89 Le Mans cars.

Whereas Jan Lammers had the chassis that wouldn’t go slowly in ’88, Davy Jones started the ’89 race with that year’s flier – #288. The Mercedes dropped back, one of the Nissans hit the John Nielsen Jaguar, and Jones was gone, away up the road and out of sight of all challengers. This could have been a repeat win – could. Derek Daly took over from Jones, but was soon stuck on the Mulsanne, with gearbox troubles. He received instructions to jam it in any gear because the torque would get him back to the pits, but he was unlucky enough to jam it in reverse. Try again, DD.

#288 returned to North America and having not won a race since the start of 1988, it then won the last race of 1989, at Tampa, in the hands of Price Cobb. This car did have an unusual career.

It began 1990 with a second-place at Daytona (Brundle / Cobb / Nielsen), which was #288’s penultimate race as #288. March saw it retire at Sebring (Cobb and Nielsen), then it was returned to the UK in April, rebuilt with minor changes as XJR-12 #1090, and was all set for its last race. The turbocharged Jaguars had long since taken over in Europe as the sprint cars, but the V12s had one more Le Mans left in them….well actually two, because they appeared in 1991 too, in the mainly mauve colour scheme.

Not ‘our’ #1090 though. Not only did this chassis finish its Jaguar racing career at Le Mans, so did Tony Southgate. “It was complicated: my contract actually finished at Le Mans in 1990. I was heading for Aston Martin, to design the successor to the AMR-1. Remember that car?….one or two good results, but Aston Martin were going the three and half-litre route because Bernie wanted sportscar manufacturers to build F1 engines… so they’d go into F1. Only Peugeot did of course.

“When we heard that Ford had bought Jaguar, I said to the Aston Martin guys that effectively, we had a big problem looming, why would Ford want sportscar programmes with both companies? They didn’t of course.

“Now the reason I was leaving TWR was that it was difficult to ‘massage’ money out of Tom. He did pay me well, but others in sportscars were getting a lot more than me. Tom wasn’t going to pay me a lot more money, so I had to move. Straight to a company that was about to stop racing! But Tom made me wait: there was a termination clause, and he didn’t want me going to another company sooner than I had to. I worked on the XJ220, the XJR-15 road car, anything that was going really, and then Ross Brawn and the Arrows lot arrived to design the XJR-14, and Tom didn’t want me involved with that… anyway, Le Mans 1990 was my last race with TWR.”

Tony Southgate ended up working for Yamaha for a few months, before settling down with Toyota to design their three and a half litre car. The Wallace and Lammers connection eventually went with him to the Japanese manufacturer… but we’re getting ahead of ourselves. 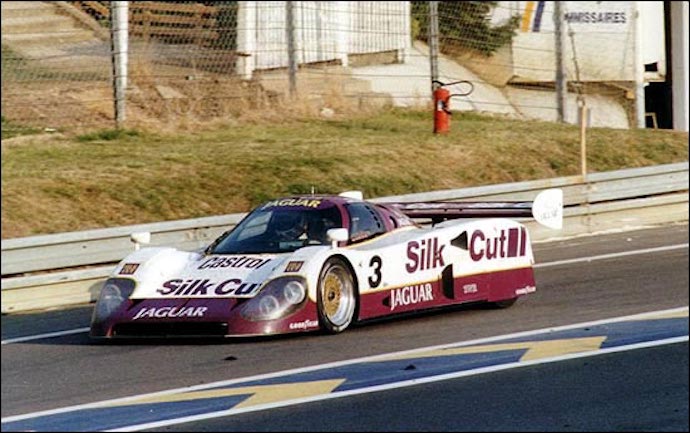 “The XJR-12 was basically the ’89 car, but with aero changes to cope with the reduction in top speed thanks to the introduction of the Mulsanne Chicanes. It was an intermediate set up, with more wing than at Le Mans the previous year, but not as much as in sprint configuration.” (compare the ’89 and ’90 rear wings)

“The Sunday at Le Mans was my last day with TWR. I didn’t have a specific job, but instead I’d look at the wider picture. When you’re not looking after a specific car, you’ve got time to see what the other teams are doing. I’d keep Alistair (McQueen) up to date with what else was going on.

“It was unfortunate for poor old Salazar…..”

John Nielsen recently explained that the Chilean had made a mistake in Qualifying and damaged a gearbox, and as the ‘Captain’ of the #3 entry, he and Price Cobb (in association with Tom Walkinshaw) had hatched a plan. The Dane and the American would drive double and triple stints, and await developments. They kept that up for hour after hour.

“Just look at who drove the night stints in the Jaguars: they were the long distance men,” explains Southgate. “John Nielsen loved it, he’d go round and round for hours. We introduced the triple stints with John, and each stint was a bit longer then. Most drivers were capable of triples, but some just loved it.” 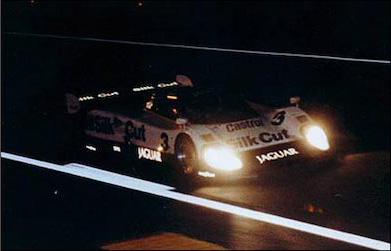 So after a double stint each, Nielsen began triples at 8 pm (actually more like two and a half stints initially, for both he and Cobb), then full triples at 23.15… two of them for Nielsen, split by a double for Cobb. Big John drove from 23.15 to 05.37, with a break of just 98 minutes in the middle. This is the stuff of legends.

At 06.52, Brundle’s #1 car was retired, and with a driver allowed to drive more than one car (as long as each car didn’t have more than three drivers), he was switched to the #3. “Salazar was all kitted up ready to get in the car! Tom didn’t even look at him, just said ‘Brundle in,’ and Salazar was left standing there, with nowhere to go.”

A mid-morning calliper change was the only handicap for chassis #1090, and with poor Jesus Pareja retiring the Brun Porsche 15 minutes before the end, Jan Lammers finished second in #2, with #3’s Captain bringing 1090 home to its retirement victory.

Tony Southgate could move on after securing a second win at Le Mans, and #1090 was retired. It only ever won three races, but two of those were its first and last, Daytona and Le Mans. What a car.

PS Just look at some of the names featuring here. John Nielsen, Andy Wallace, Jan Lammers and Michel Ferte are all competing in the 71st (2003) Le Mans 24 Hours, Alistair McQueen is engineering one of the Bentleys, Eddie Hinckley and Rod Benoist (both heavily involved as race engineers with Jaguar) are with Veloqx-Prodrive at Le Mans…and there are bound to be others involved this year too. They just can’t keep away, can they?

With thanks to Tony Southgate, and to Jeremy Jackson and Dave Kutz for the use of the images. The non-credited ones are Jeremy’s too.