Here’s another dip into the archives for a Le Mans story from years gone by – This time a story from 2003 as a standout feature of the all-conquering Audi R8 was about to be ruled out by a regulation change.

To the astonishment of onlookers Audi had shown, mid-race, that they were able to change the entire rear end of the R8 in under 5 minutes, a race saving, even race-winning feature of the design. 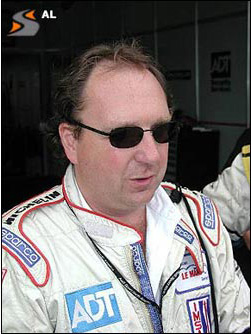 An outstanding feature of the Le Mans 24 Hour races in recent years has been the ultra-fast rear end changes made to the Audi R8 racecars. The first time this was done during the 2000 race the procedure, carried out in less than four minutes, created a sensation that went beyond the racing community. In subsequent three years, as the R8 racecars have passed into the hands of private teams, an unofficial rear end change championship has taken place, with a best time of just over three minutes by an Audi Sport crew. The rivalry between the teams, while friendly, is also a positive way of motivating a crew, as Brad Kettler, Technical Director of the Champion Racing team told Alan Lis. “I think it’s a good healthy thing for camaraderie, it’s beneficial for the race and it gets the guys in the zone.”

As we approach almost the last occasion for an Audi rear end change this season, Brad Kettler explains the whole process.

Did your crew receive any training from Audi Sport in changing rear ends?
“What training we have had has come from working on the car. We try to practise pit stops drills at least twice during the weekend. No formal pitstop training was provided, although Audi Sport does offer advice and encouragement, basically it’s left to us.

“It’s not an easy thing to do (the rear end change) although it may seem like that because it’s been done quite a lot now. I can tell you that even with six very talented crew members who have done it several times, without the drilling and without the practice, even with six number one mechanics and giving them a chance to do it four of five times, they are still going to be in the six-minute range. It takes a long time to get it down under four minutes. It has to go just right. There’s no secret, apart from just doing it.

What makes the difference between a fast and not-so-fast change?
“It’s funny, but when it goes really quickly it’s nearly calm, but when it goes badly you’re thrashing like crazy and it’s 4m 50s. The one thing that either holds it up or doesn’t is the attachment to the floor, under the gearbox. If it doesn’t go well the guy on the crane has to be really switched on as to when to pull the assembly out and get it out of the way. There can be a ten second loss there, craning the old one out, as the new one is coming in. We have an overhead crane to take out the old one and move the new one in with the ‘cherry picker’ (floor crane). If you get it right with the new one, if it’s hung at the right angle and the gearbox is in gear and the guys hit the angle correctly, it will be a quick one. Even though the rear end is made to be changed quickly, you are still fitting an input shaft into a precise hole in the clutch. You can stuff it in there pretty well, but it still takes a little finesse at a certain point to match up the splines. Otherwise you damage the clutch or the input shaft or both, and then you really have a tough job on your hands.

Does the crew need special equipment?
“We don’t use any specialised tools and, in fact, the only air tool we use is a ratchet to pull the bolts out of the floor. To remove the rear end you have to remove a ring of six nuts around the bellhousing and release it from the two points at which it’s attached to the floor of the engine bay. Those two points can be a bit delicate to get back together. The choreography of the bodywork is very important. The tail is a huge piece that takes up the lion’s share of a garage, and it’s heavy and difficult to handle. 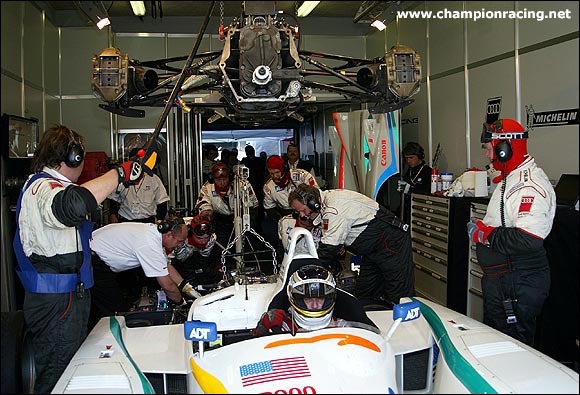 What’s your personal role in the procedure? (Brad on the left, above, in this image of a practice change at the 2003 Le Mans Test Day)
“When the old gearbox is released we pull it away, I get hold of it and tilt it up and we start to crane it away as quickly as possible. It just clears the engine on the way out so it’s critical not to hit any oil pipes or other parts while it’s coming out. It’s pulled up to the ceiling and kind of parked over the top of the driver. Then I change the data card, to transfer the data from the old gearbox to the new one, and look over the rest of the car while the new gearbox goes in.

This is Johnny Herbert hurrying back into the race, after the change at Laguna Seca recently. 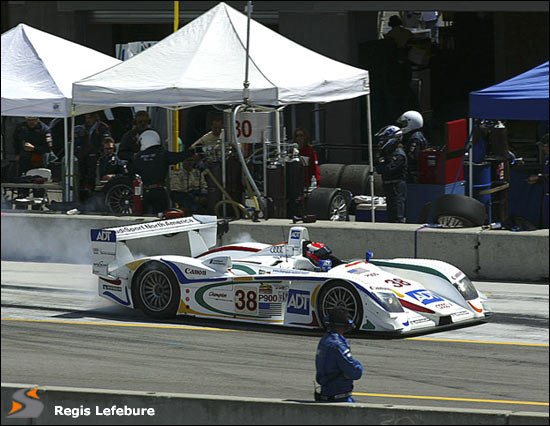 The procedure has been made to look almost routine, but there must be elements that are not obvious to the observer. What are they?
“The rapid rear end change is an important aspect of running an R8: as soon as you have one, everyone assumes that you can do it. There’s an extraordinary amount of procedural preparation that needs to happen before you can put a new rear end on a car. Everything has to be bled correctly; the alignment has to be matched to make sure that it’s going to work when it’s fitted in an emergency.

“When you make a change at Le Mans, you shove in the new rear end, put the tail on and send the car out. You’d better be damn sure you got it right, because one minute later the car will be doing 200mph. It has to be absolutely spot-on. It’s a big responsibility. The way the R8 has been designed makes the rear end change easy, but it’s not just an automatic process. There’s a lot of preparation involved and there are lots of things that mistakes could be made on.”

So how fast can your team do it?
“We did two practice rear end changes on the Tuesday before the race at the 2003 Le Mans. One took 3m 34s and the other 3m 17s. The all-time record is 3m 08s, by the factory team, not Joest. The works team that was headed by Dieter Meissler (now Audi Sport technical co-ordinator) for the number three car in 2002 did that.” 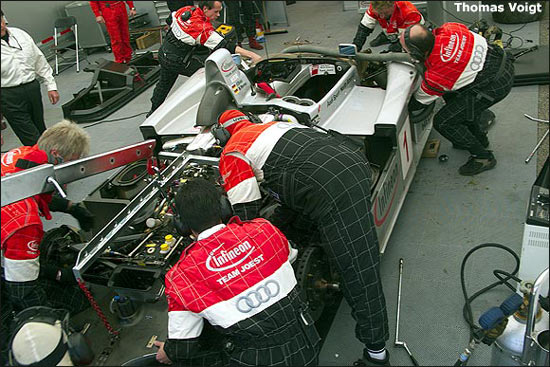 PS. There’s an addition to add to this feature, now that Petit Le Mans is behind us. Almost the last chance this year for a rear end change on an R8? Ironically, it was the Joest Infineon car that needed it on October 18.

And here is film of the changes described above taking place, at Le Mans in 2000 – twice!