Aston Martin Racing delivered one half of a brace of 2020 Le Mans class victories for the marque, the first for its latest spec Vantage AMR and its most successful result in both classes at Le Mans. 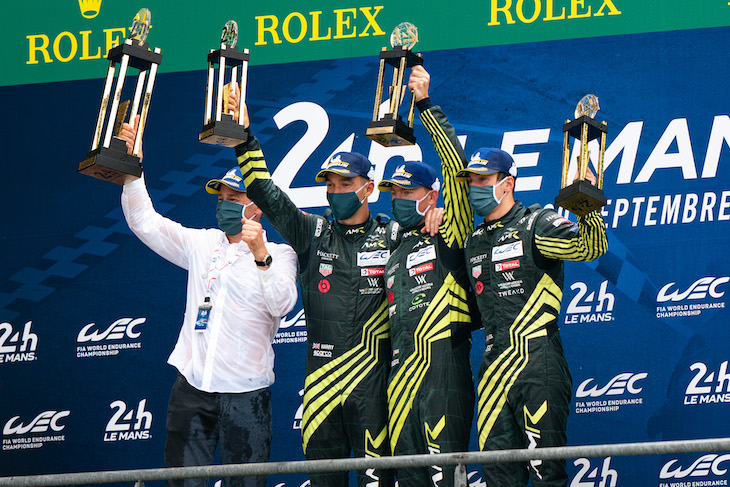 The #97 Aston Martin Vantage AMR of Maxime Martin, Alex Lynn and Harry Tincknell took a well-managed victory after a confident performance by the whole Aston Martin operation all week at La Sarthe, the #95 car of Nicki Thiim, Marco Sorensen and Richard Westbrook also making the podium in third place, delivering the WEC Manufacturer’s title for the British marque with one round of the championship remaining. 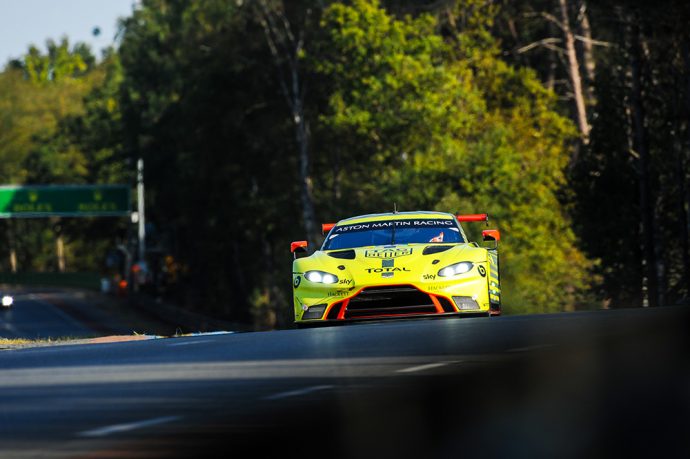 Finishing in the top 20 overall in a race that featured just shy of 30 prototypes on the entry, the #97 car had come through Hyperpole to start fourth on the GTE-Pro grid and been a front runner from the outset, trading the lead with the #51 AF Corse Ferrari’s defence of its crown.

The category hadn’t provided the 24-hour dogfight we’ve become used to in GTE-Pro, Lynn’s best lap of 3:50.321 nearly three seconds shy of the class lap record and the race at the front more strung out for track position than usual.

Though Maxime Martin and Harry Tincknell were mighty and disciplined in their attack on the race, Alex Lynn’s stints, particularly overnight, anchored the win.

A succession of five best laps extended the #97 car’s lead to over half a minute into the early hours of Sunday, the British driver staying aboard the car to pile on crucial extra seconds advantage as the #51 Ferrari chose to refresh its drivers.

Both Aston Martins had not shown well on their early choice of tyres, the small disadvantage of their medium compound enough to give the Ferraris an early edge. Tyre strategy seemed key to this result for the Aston Martin Racing crews having struggled at last year’s event: the high torque of the Vantage AMR requiring a front/rear compound change into the darkness; longer lasting mediums on the rears complemented by softer fronts for turn-in grip. This was a key decision that mitigated the Ferraris’ small advantage on the softer compound in cooler conditions. Additionally, the team reported that the winning car had achieved its success without the need for a brake change, a key marker for development. 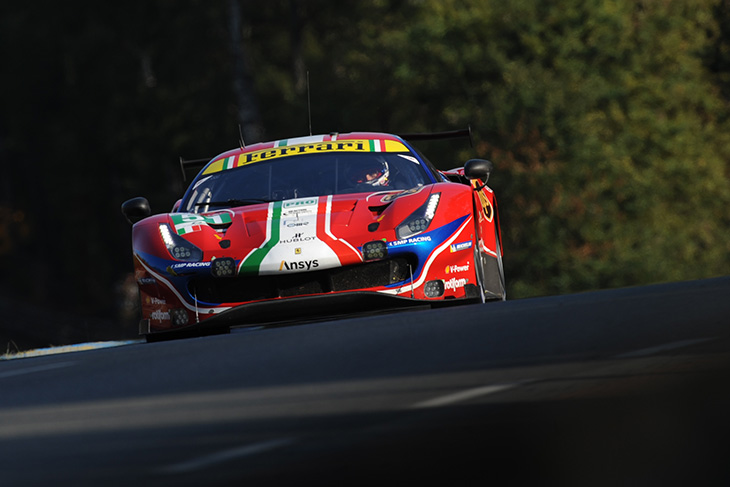 Ferrari’s efforts showed pace and aggression and looked to have the edge in the first half of the race, but the AF Corse team had to settle for second place in an out-of-sync strategy for the #51 car of James Calado, Alessandro Pier Guidi and Daniel Serra that might have worked better had the race not seen so much green flag running and had weather disruption occurred as widely predicted.
The reigning GTE-Pro champions defended the car’s honour well but had to give best to the resilience of the #97 Aston Martin. 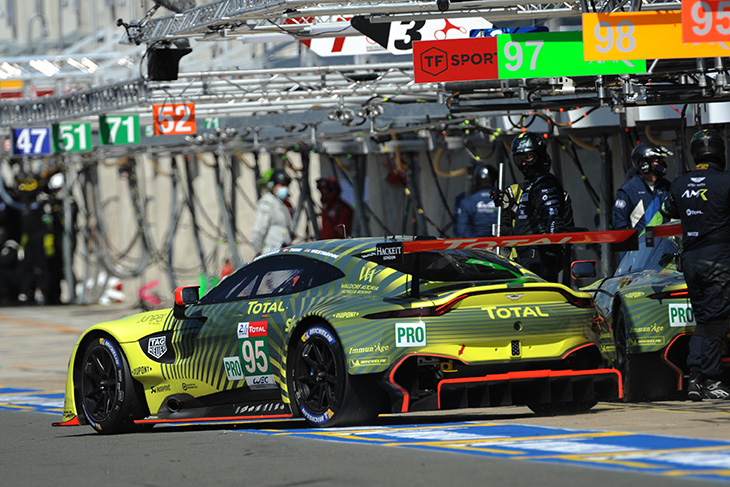 Third place was a just reward for the #95 Aston Martin. Nicki Thiim and Marco Sorensen’s erstwhile ‘Dane Train’ was joined by Corvette and Ford refugee Richard Westbrook. Not wanting for pace and experience, the car was the quicker of the Aston Martin pair in qualifying but was resigned to a robust supporting performance as a brake change in the night, a succession of minor infringements and safety car periods bumped the car further away from the class lead. Although 3 laps off the lead, third place helped deliver the marque’s strong return to form at Le Mans and points that brought home the WEC Manufacturers’ Championship a race early.

To add to Ferrari’s disappointment, the sister #71 car of Davide Rigon, Sam Bird and Miguel Molina failed to take the finish after a broken driveshaft on the very last lap denied the crew a hard-earned fourth-place finish and vital championship points. The #71 car had run at the top of the class, Sam Bird particularly impressive early on, mixing it with the Aston Martins throughout, and had looked threatening until a puncture in the 11th hour forced the car in for repairs to its braking system, re-joining in the top four but in a secondary role.

The last-minute retirement of the #71 car left the Risi Competizione Ferrari to come home fourth after a hard-fought week for the team and challenging previous Le Mans appearances. A solid driver crew of Olivier Pla, Sebastien Bourdais and Jules Gounon impressed throughout, but the car simply lacked front-running pace. 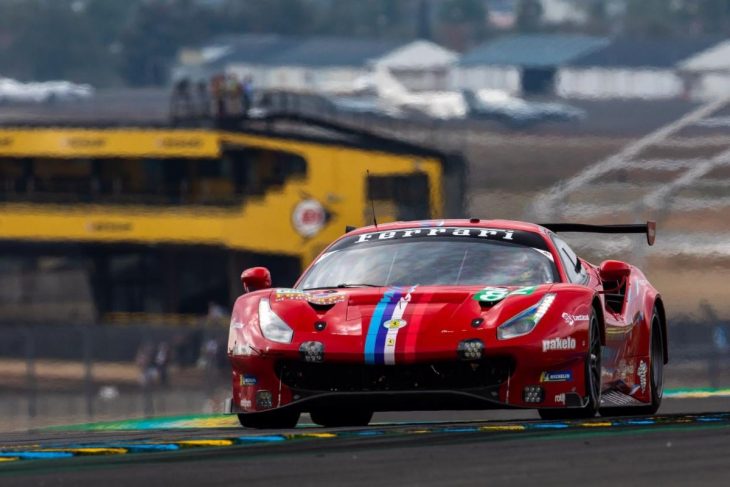 A damper failure during the night sent the car to the pits for a replacement and other repairs, but Bourdais’ pace in particular kept the car on the rails for a respectable finish.

Weathertech Racing’s 488 GTE Evo had shown as the better of the privateer Ferraris, running fifth in class on the back of a strong start from Toni Vilander, who had spearheaded the #63 car’s Le Mans campaign with experienced Le Mans campaigners Cooper MacNeil and Jeff Segal. The car was denied a finish however, Vilander striking or struck by the Racing Team Nederland LMP2 car in a misjudged pass, its damage irreparable. 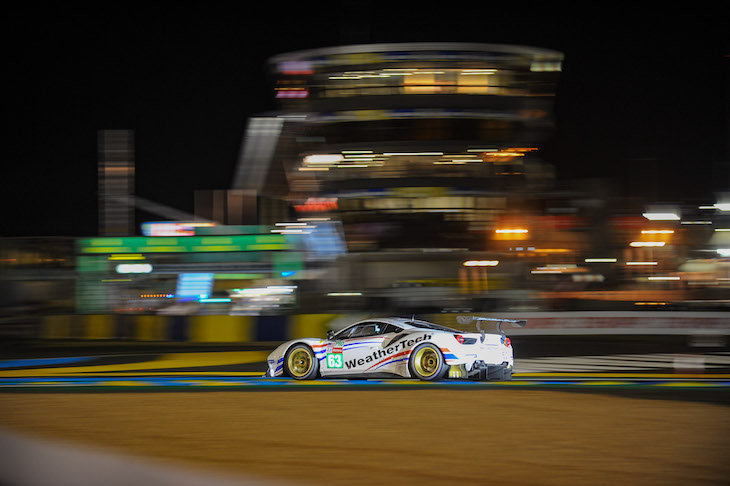 The Race Stewards deemed the incident as Vilander’s fault, most onlookers thought that conclusion an error.

It’s rare to report disappointing performance for Porsche at Le Mans, but it was just that. The Manthey run cars looked good in qualifying, the #91 911 RSR taking class pole in the hands of Gianmaria Bruni, but simply did not feature in the race. A minor BoP change saw an extra kilo of fuel for the 911 RSRs but this could not be attributed to their sheer lack of performance.

Off the pace from the start, the red retro liveried car of Bruni, Richard Lietz and Fred Makowiecki dropped back from pole to fourth within two laps. Both Porsches looked to be running a conservative pace and playing a waiting game for the ‘inevitable’ rain that was predicted. The weather held off, everyone else pressed on… the #91 car would finish the race fifth in class, completing 335 laps, eleven laps behind the class winning Aston Martin. 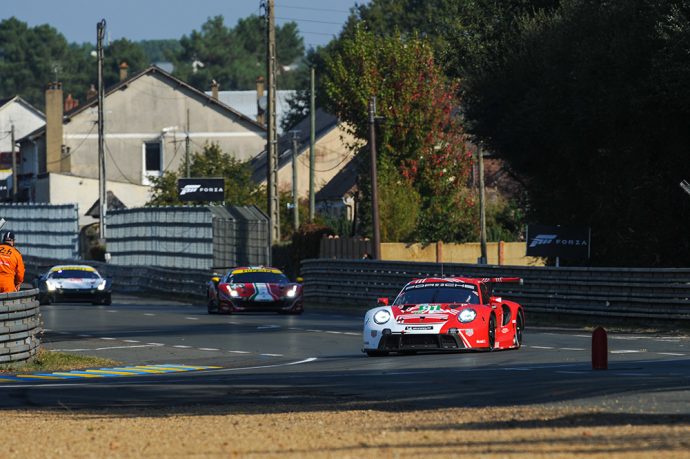 The #92 car of Christensen, Estre and Vanthoor might have fared better, but were similarly underwhelming. An early puncture dropped the car back, followed by a power steering failure in the fifth hour. 12 laps down, the car re-joined, but a finish in sixth place and way down the running order was all the Porsche could manage. 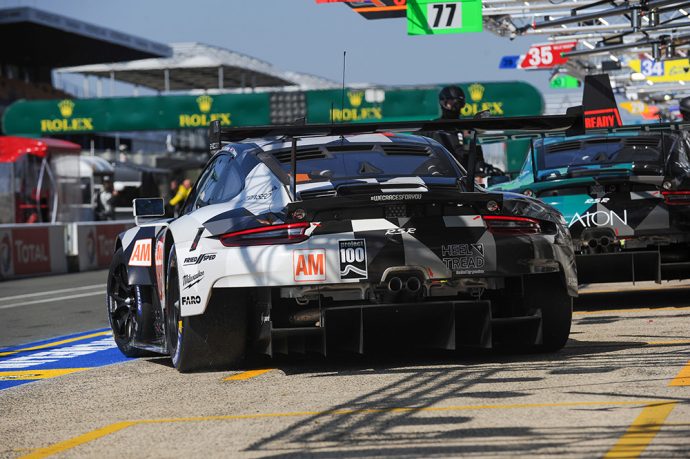 A different Le Mans in many ways for GTE-Pro, but welcome back to the top step of the podium Aston Martin!