The age of the LMP1 Hybrid at the 24 Hours of Le Mans was a golden period in top-flight endurance racing that will, at its height, be remembered in years to come as fondly as the best years of Group C racing a generation ago. 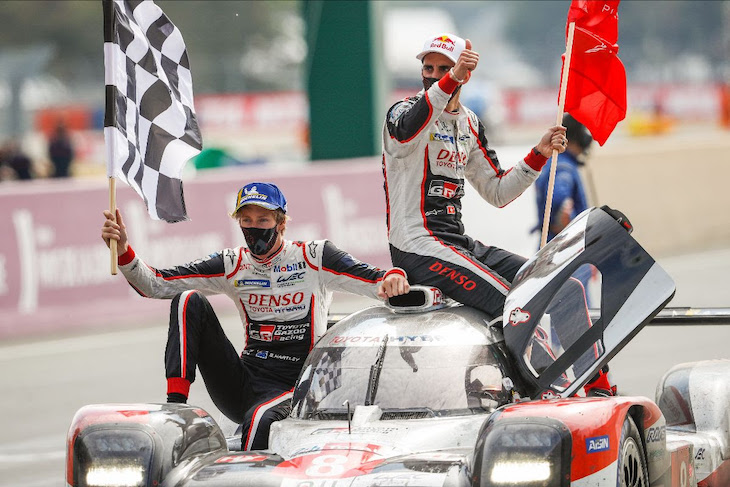 Toyota Gazoo Racing were there to start this great era at Le Mans in 2012, and they were there to close the curtain on this era in 2020 in grand fashion – with the third consecutive victory for their number 8 Toyota TS050 Hybrid, driven by Sébastien Buemi, Brendon Hartley, and Kazuki Nakajima, the team thereby claiming the current trophy permanently. 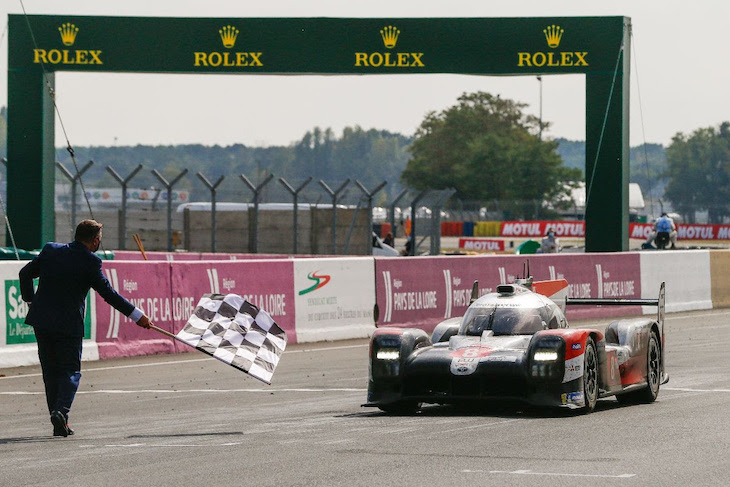 Conversely, after commanding most of the first half of the race, there was heartache on the other side of the Toyota garage – yet again – for the number 7 Toyota TS050 of Mike Conway, Kamui Kobayashi, and José María López, who dropped from the top spot just as the second half of the race after a serious failure with the turbocharger cost them half an hour in the garage for repairs. 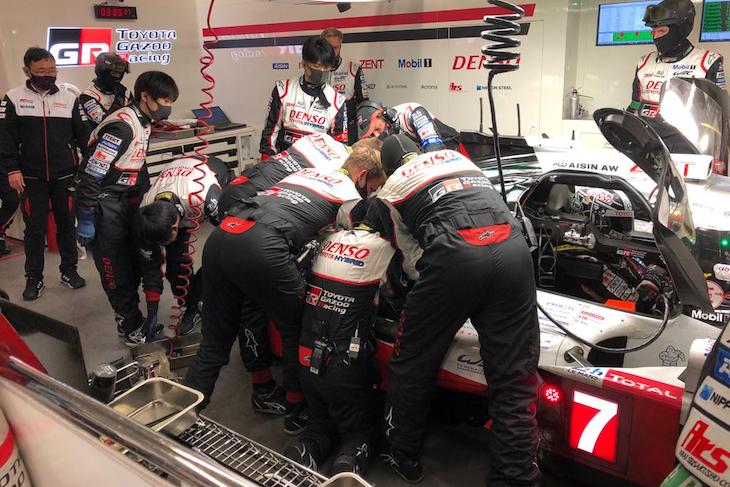 For that first half of the race, the two hybrid-powered Toyotas stood head and shoulders above the rest of this five-car entry of LMP1s, in what will be the last year for this category before it is succeeded by the Hypercar class from 2021. But the advantage was with the number 7, with the number 8 having issues with the right-front brake early on that put them a lap down. 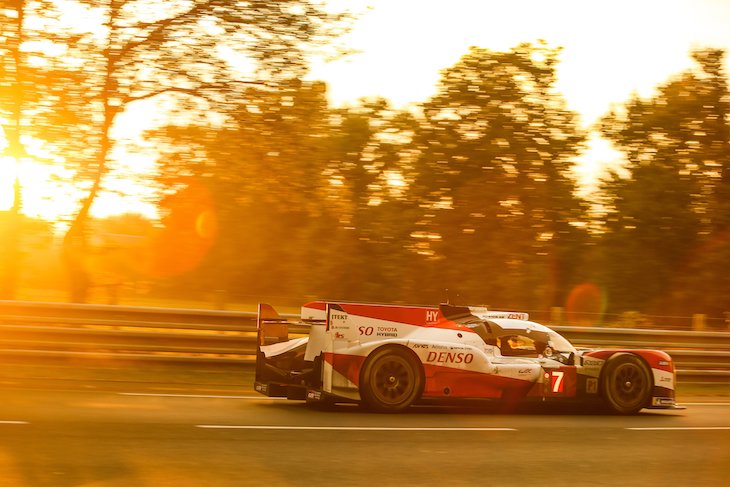 Conway, Kobayashi, and López drove a perfect race, but that old, sick, curse-seeming feeling returned when the number 7 was wheeled back into the garage when the right-side turbo failed. It took 33 years for Toyota to slay its demons at Le Mans, years of heartache and collapse, before they finally won their first race as a manufacturer. But this hex has seemingly been lifted for only one side of the Toyota effort. For the #7 crew of Conway/Kobayashi/López, who already had to endure late-race meltdowns in 2018 and in 2019, this third successive defeat will hurt just as much. And it will be little consolation that they were able to rise to the final step of the overall podium in the final hour and finish third.

But this should not, and will not, take away from what the winning trio of Buemi, Hartley, and Nakajima have accomplished in victory, as they completed 387 laps around the Circuit de la Sarthe in 24 Hours.

Nakajima was once Le Mans’ unluckiest man, the man at the wheel in 2016 when his TS050 Hybrid broke down on the home stretch on the very last lap. Now, he and Buemi, two Formula One castoffs who’ve found new life in LMP1, join the incredibly rarified air of drivers who’ve won the race three consecutive years – a list that includes Olivier Gendebien, Henri Pescarolo, and Jacky Ickx; a list that includes Audi legends Tom Kristensen, Emanuele Pirro, and Frank Biela, who won Le Mans as a trio in three straight years from 2000 to 2002, and Marco Werner, who won three straight from 2005 to 2007.

Buemi ties his fellow Swiss Marcel Fässler, with three overall victories. Fässler was co-drivers with André Lotterer and Benoît Tréluyer, who once raced in Japan’s top categories of Super GT and Super Formula – alongside Kazuki Nakajima, now the winningest Japanese driver in the history of the event, and truly having written his own legacy independent of his great father Satoru.

Like Buemi, who was once cast away from Red Bull’s F1 driver academy, New Zealand’s Brendon Hartley is reborn again in his return to Le Mans for the first time since he won in 2017 with Porsche. His second overall victory makes him one of a few that have won the race overall with multiple manufacturers, and it ties his countryman Earl Bamber – his co-driver with Porsche in 2017 – for the most overall wins for a Kiwi driver, surpassing 1966’s winners Bruce McLaren and Chris Amon.

Toyota ties future Hypercar rivals Peugeot and fellow French manufacturer Matra with three overall victories, and the TS050 has won its third straight race in its swansong, equalling cars like its old rival, the Porsche 919 Hybrid, winner of the previous three Le Mans in succession from 2015-17.

We don’t know what sort of legacy that the TS050’s successor, the GR Super Sport Hybrid, will write in the years to come – but the hope for Toyota supporters is that they can continue to be successful in the hypercar era, to prove to the cynics that they weren’t just the benefactor of staying in LMP1 after the manufacturer bubble shattered.

In Rebellion Racing’s final entry into the 24 Hours of Le Mans, the Swiss team scored their best-ever Le Mans overall result as the #1 Rebellion R13-Gibson of Gustavo Menezes, Norman Nato, and Bruno Senna finished second, five laps in arrears of the winning #8 Toyota. 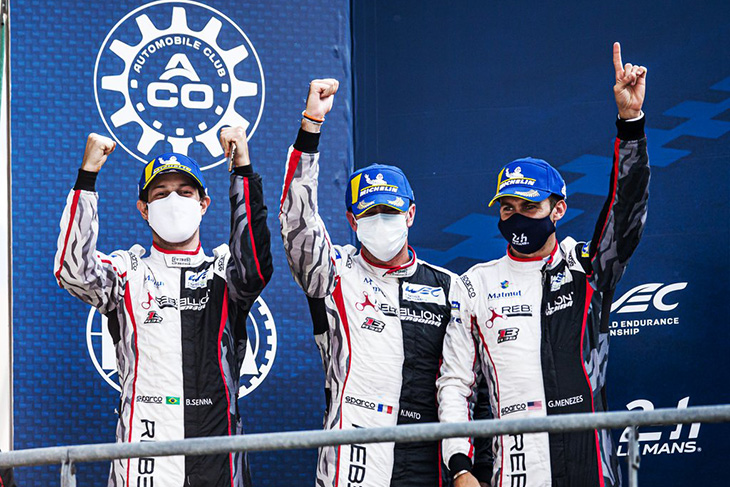 Senna had actually set the outright fastest lap of the race, very early on, but the strength of the Toyota Hybrids, through traffic and in the pits, was just too much to live with as it pertains to the battle for the overall win. Still, this was a great send-off for the Swiss team, who’ve also recorded the best overall finish at Le Mans for a privateer LMP1 class car in the Hybrid era, surpassing Rebellion’s third-place finish in 2018, which California native Menezes was also a part of. For all three drivers, Menezes, Nato, and Senna, this is their best-ever overall result at Le Mans. 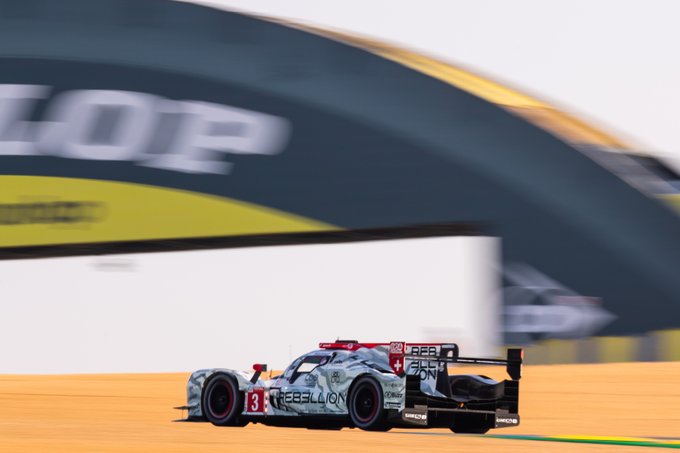 The #3 Rebellion R13 of Nathanaël Berthon, rookie Louis Déletraz, and Romain Dumas was on course for a podium following the #7 Toyota’s mechanical woes. But in the last two hours, they too would have their fortunes turn drastically after they had to come into the garage for lengthy bodywork and starter repairs. 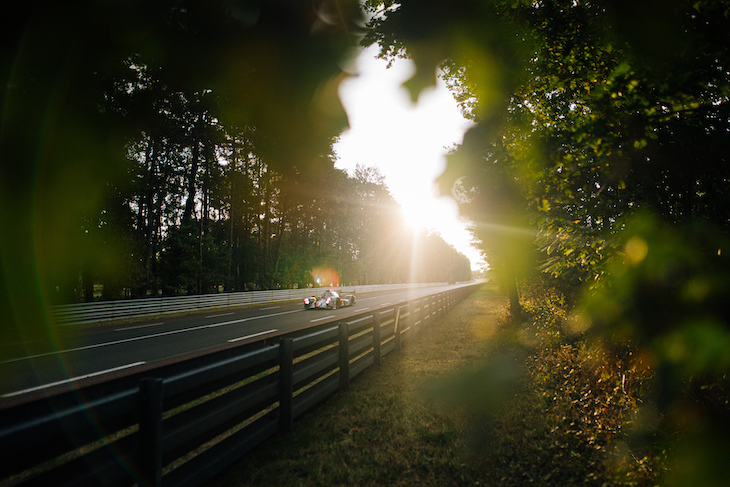 As mentioned, the #7 Toyota would finish third, six laps off the lead, and the #3 Rebellion of Berthon, Déletraz, and Dumas would finish fourth overall, 39 seconds adrift of the Toyota. For Berthon, it’s his best overall result in seven races. For Dumas, who’s now run twenty consecutive Le Mans 24 Hours, his best result since winning overall in 2016 for Porsche. And for Déletraz, a real-world Le Mans rookie who won the Virtual rendition in June, he surpasses his father Jean-Denis’ best-ever finishes of 5th in 1995 and 2001.

Next year, these same non-hybrid LMP1 cars fielded by Rebellion Racing will live on, as French automaker Alpine will take over the programme from 2021.

The World Endurance LMP Drivers’ Championship seems almost an afterthought in the context, but it does have to be said that there is still a championship to be decided with just one more race left in the extended 2019-20 season. With the victory worth double points, the trio of Buemi, Hartley, and Nakajima move into the championship lead on 175 points. Conway, Kobayashi, and López fall to second in the table, on 168 points. Menezes, Nato, and Senna are now third, on 145 points. A maximum 38 points are on offer for victory in the season-ending 8 Hours of Bahrain on 14 November.

For ByKolles Racing Team, Le Mans was once again a harbinger of heartbreak. Their #4 ENSO CLM P1/01 driven by Oliver Webb, Tom Dillmann, and Le Mans debutant Bruno Spengler crashed out after the first quarter of the race: The rear wing failed through the S-Curves at Tertre Rouge, sending Spengler, a past DTM Champion, crashing into the tyre barriers six hours and thirty minutes into the race. 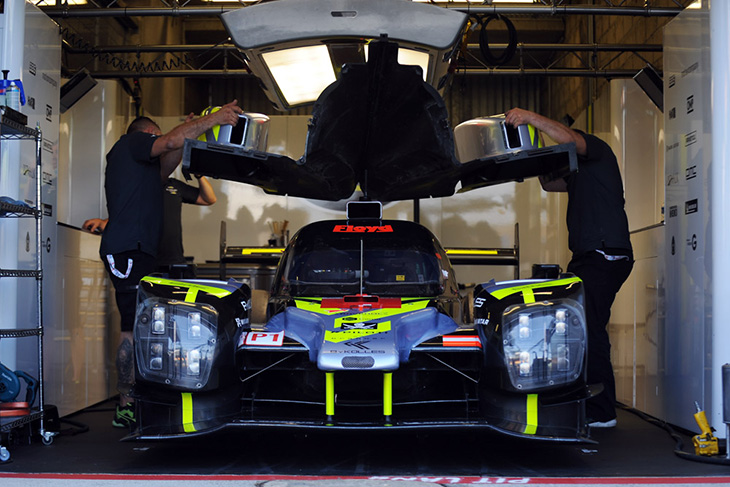 Even though Spengler was able to drag the car, limping and shedding debris, back to the pits, the damage was terminal. The CLM P1/01, a car that has punched well above its weight class for so many years, will go down 0-for-6 when it comes to finishing the 24 Hours of Le Mans. Colin Kolles’ team hasn’t finished this race since 2009, eleven long years ago.

The race was already proving a challenge, nowhere close to the pace of the Toyotas and Rebellions at their best, and already compromised by an alternator issue in hour three.

At least there is some sliver of optimism for the future to hold onto, with ByKolles committed to returning in 2021 with the “PMC Project LMH”.