In GTE Am, the # 90 TF Sport Aston Martin Vantage of Salih Yoluc, Charlie Eastwood, and Jonny Adam took home the win. The two Aston Martin Vantages in GTE Am were on a different level from the rest of the field all race and as it so often does at Le Mans, the defining moments played out under the cover of darkness.

TF Sport had front-loaded the drive time of Yoluc which allowed them to run only Eastwood and Adam throughout the night. Once the sun rose on Sunday, they had built up a sizeable lead needed only three more stints out of Yoluc before they could go back to Adam and Eastwood.

The win was effectively sealed with just over thirty minutes to run when the Safety Car split up the GTE Am pack. The #90 Aston Martin was left by itself in a separate Safety Car queue from the rest of the GTE Am field. Second, third, and fourth in the class, however, were bunched together behind the same Safety Car train setting up a titanic last hour dash for the final spots on the podium.

On the Safety Car restart, Matt Campbell in the #77 Dempsey-Proton Racing Porsche 911 RSR held off a hard-charging Nicklas Nielsen in the #83 AF Corse Ferrari 488 GTE. Campbell then switched from defence to offence and passed the #56 Team Project 1 Porsche 911 RSR of Matteo Cairoli for the second step of the podium for himself and teammates Christian Reid and Riccardo Pera. 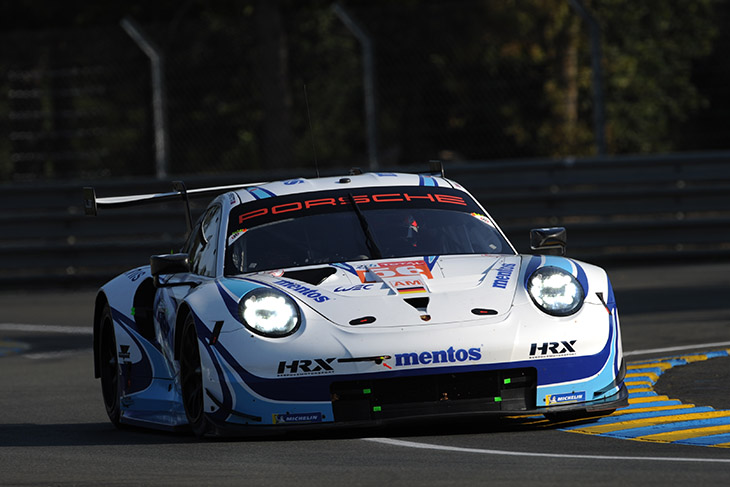 Nielsen was unable to mount another challenge to Campbell, but he was able to also pass Cairoli shortly after Campbell had got by. That earned himself, Francois Perrodo, and Emmanual Collard a spot on the final step of the podium. 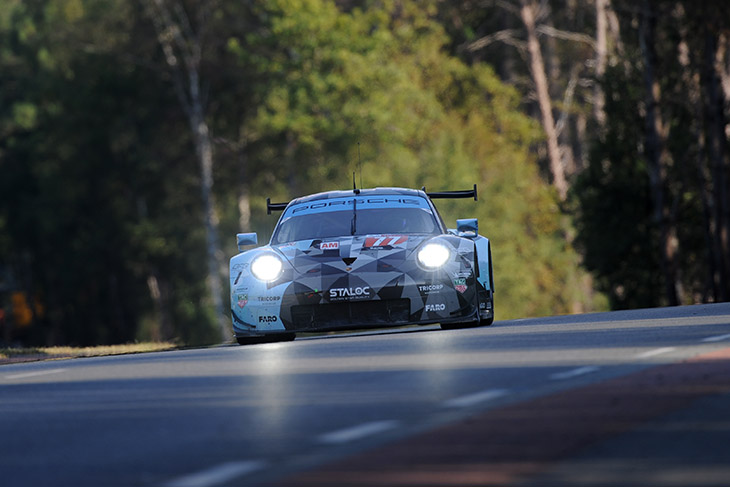 While the late-race Safety Car split up the field, the #90 Aston Martin didn’t really need any extra help. Aston Martin had the legs on the rest of the GTE Am field and for virtually the entire race it was a battle between the #90 TF Sport and the factory-backed #98 Aston Martin Vantage.

Those two cars traded blows throughout the night but just before sunrise, the #98 Aston Martin suffered a suspension failure that dropped it out of contention. That left the #90 TF Sport at the fore of the field by itself. At that point, it was a question of whether anything would go wrong with the #90 Aston Martin or if the different conditions on Sunday would play into the favour of someone else.

Neither of those things came to fruition and TF Sport was able to bring home the win by 49.752 seconds. Salih Yoluc, who celebrated the win draped in the flag of his native Turkey is now the first Turkish driver to win the Le Mans 24 Hours.

The #98 Aston Martin ended the race in eighth after another heartbreaking Le Mans race for Paul Dalla Lana who, despite his considerable accolades, is still searching for success at the Circuit De La Sarthe.

For TF Sport, this win will be the jewel in the crown for the team that has won at all levels of FIA/ACO rules racing including in the Michelin Le Mans Cup and European Le Mans Series. This is the first win for the next-generation Aston Martin Vantage which looks set to have a fruitful career after the performance they showed this weekend. Yoluc, Eastwood, and Adam now have an eight-point lead on the drivers from the #83 Ferrari in the GTE Am Driver’s Championship heading into the final round of the season in Bahrain. 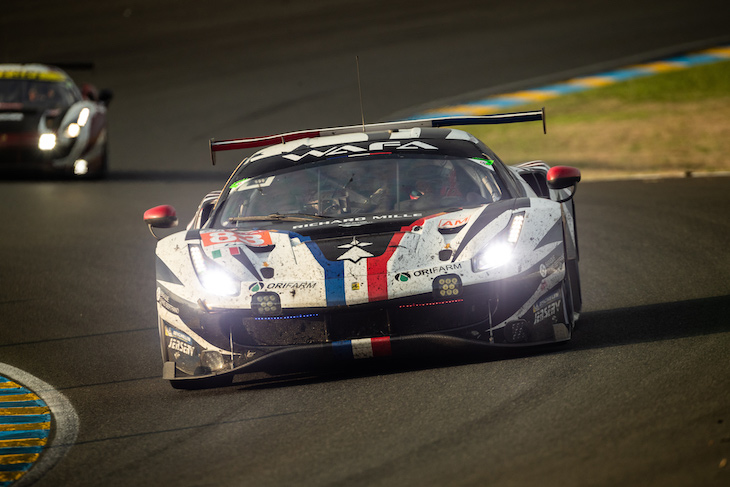 The third place finishing #83 Ferrari was a staple of the top five for most of the race. Perrodo, while he may be a bronze driver, is no slouch behind the wheel. This year was his eighth Le Mans start, and he is now a three-time podium finisher of the race. He and Collard, who made his twenty-third consecutive start at Le Mans paired with a Le Mans rookie in Nicklas Nielsen.

Nielsen, a Ferrari factory driver, was impressive in his Le Mans debut. Combining the Le Mans experience of Collard and Perrodo with the Ferrari experience and youth from the 23-year-old Nielsen made for a strong team. They ran a mistake-free race but simply lacked the overall pace of the Aston Martins in this one. They were knocking on the door of the podium all race and found their opportunity when one of those Aston Martins, the #98 Vantage, ran into trouble. 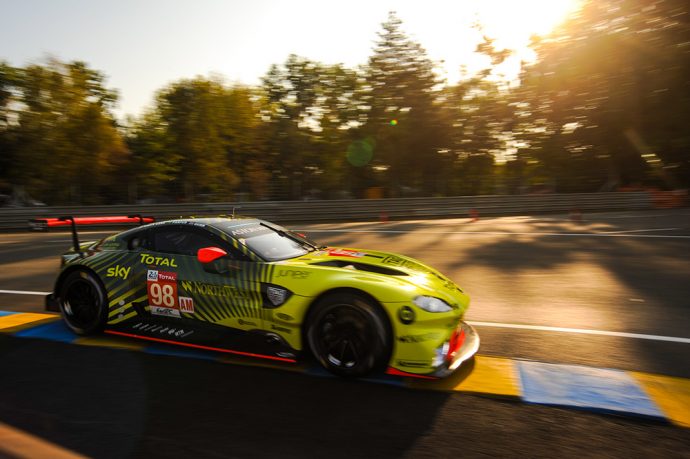 They had a shot at second, but Nielsen lost out to another young factory-backed driver in Matt Campbell in the #77 Porsche on the last Safety Car restart.

The GTE Am winners from 2019, Team Project 1 came to Le Mans this year with three cars in its stable. As the most successful one-make Porsche racing team in history, Project 1 was hoping for more success.

Their two full-season WEC cars entered Le Mans with strong lineups including the #57 Porsche of Felipe Fraga, Jeroen Bleekemolen, and Ben Keating, the lineup whose win in the Ford GT was invalidated following post-race inspection last year. When the #57 Porsche ran into trouble early in the race, hope fell on the #56 Porsche to get Project 1 its repeat Le Mans win. 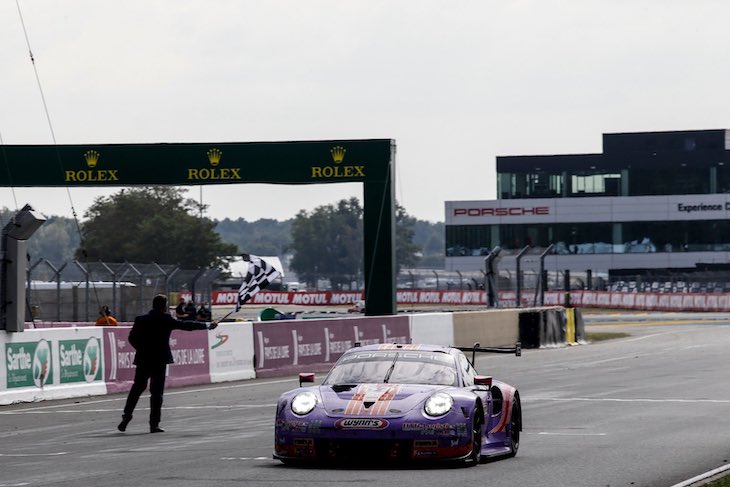 Egidio Perfetti, Matteo Cairoli, and Larry ten Voorde ended the race in fourth for the #56 Porsche crew. One of the difficulties in GTE Am is crafting a strong enough lineup that meets the restrictions on driver rankings. That’s the reason we saw the #63 Weathertech Racing Ferrari 488 move to GTE Pro.

In general, the GTE Am lineups had a theme: take an Am-rated gentleman driver, someone with Le Mans experience, and add in a young factory-backed driver. That’s what the formula was for the #83 Ferrari and #77 Porsche and that’s what it was for the #56 Porsche. Pairing Perfetti and Cairoli with the 2020 Porsche Supercup champion ten Voorde made for a strong crew.

They ran a clean race, which helped them rise to the top half of the extremely deep GTE Am field, but like the #83 Ferrari they lacked the pace to challenge amongst the two Aston Martins who spearheaded the class for most of the race. 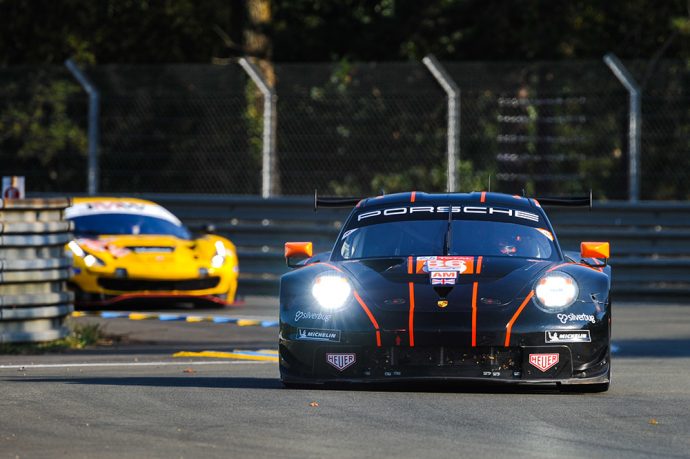 The final car in the top five was the #86 Gulf Racing Porsche 911 RSR of Mike Wainwright, Ben Barker, and Andrew Watson. Their finish meant that the top five spots were all claimed by full-season WEC runners. Barker ended up being the workhouse in the #86 Porsche driving 46% of the car’s laps and finishing the race with an average lap time quicker than some Platinum-rated drivers including Augusto Farfus and Come Ledogar according to data from The B Pillar.

Another notable finisher was the #66 JMW Motorsport Ferrari 488 GTE who came home in sixth. With Corvette-veteran and four-time Le Mans winner Jan Magnussen pairing with two Le Mans rookies in Richard Heistand and Maxwell Root, this was one of the more interesting lineups in GTE Am.

The car earned its spot in the race after IMSA used one of its two at-large bids to nominate Richard Heistand. Heistand, a Bronze-rated driver races in GTD with Lexus. Heistand was the quickest Bronze-rated driver in the field by average lap time, a remarkable achievement considering this year was his first at the Circuit de la Sarthe. 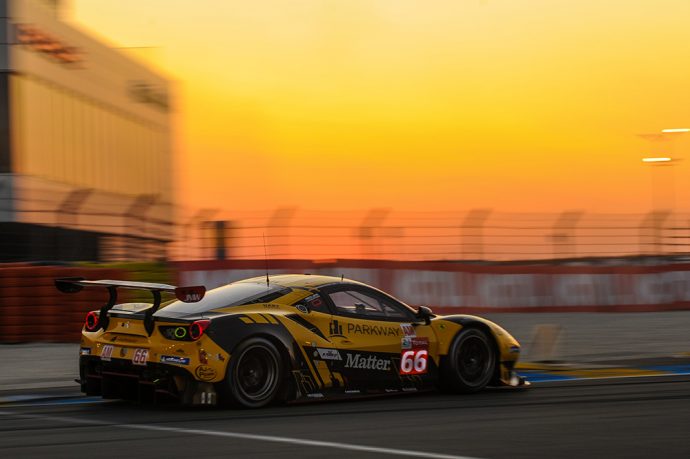 The all-Female GTE Am team, the #85 Iron Lynx Ferrari 488 GTE of Michelle Gatting, Rahel Frey, and Manuela Gostner ended the race in ninth. There was not much to say about either one of the all-female teams in this year’s race. They avoided trouble, kept the car on the track, and plucked away. They may not have competed for the win but that was unlikely to be their goal heading into the race. 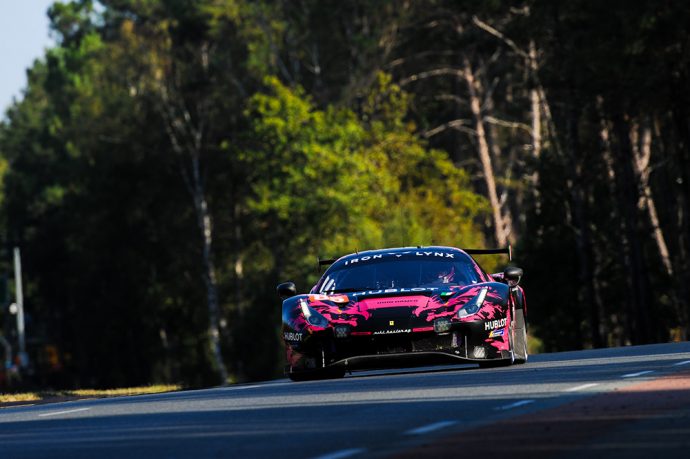 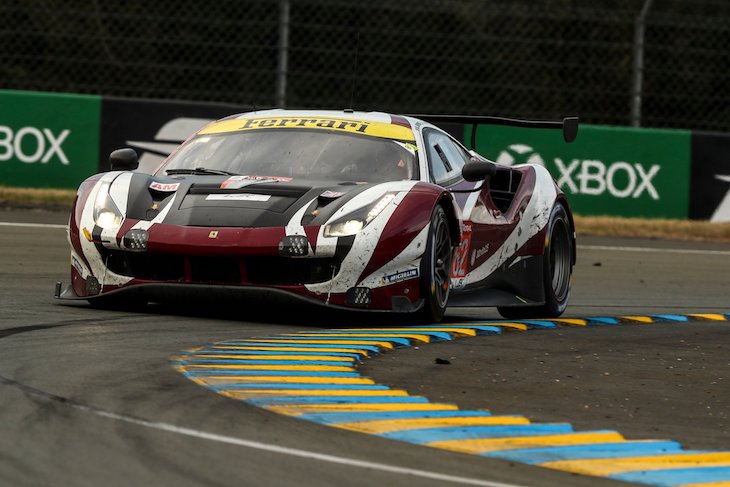 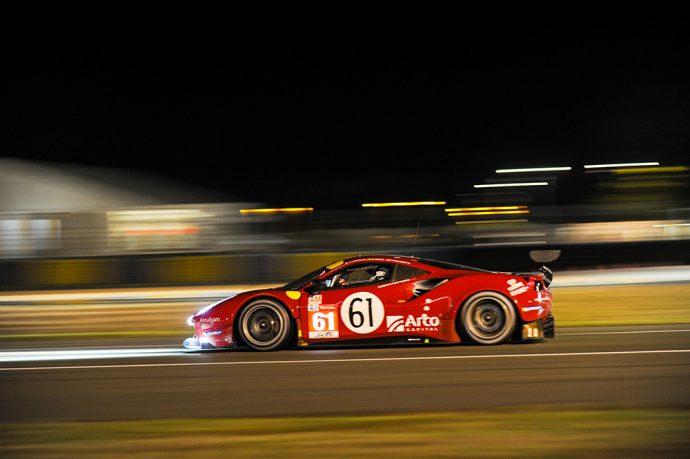 Five GTE Am cars did not finish the race, strangely, all of them Ferraris.

Two of those retirements were the result of damage, the #52 AF Corse Ferrari 488 retired after a nasty incident for Alexander West in the Porsche Curves.

The #55 Spirit of Race Ferrari 488 retired after contact with the #22 Oreca (deemed a racing incident) sent Duncan Cameron into a wild spin, causing a left front puncture and left rear delamination, significant damage being caused as he got the car slowly back to the pits, repairs were made, Matt Griffin took the car back out but it soon pitted again into retirement. 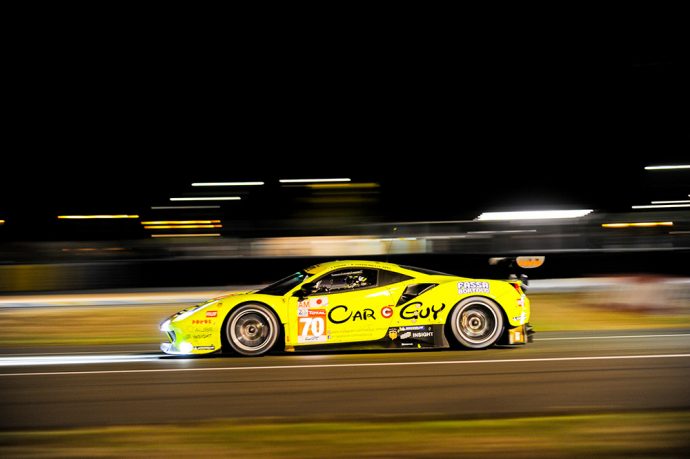 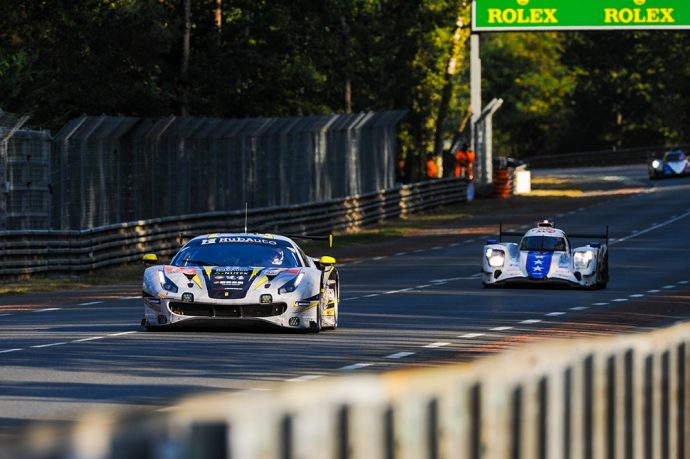 The #88 Dempsey Proton Porsche mounted a fine recovery after a near three hour delay, Thomas Preining fashioning a fix to damage caused by a very early race ‘off’ at Dunlop, his work meant that the car would return to the race, long after even Porsche sources had deemed it a retirement, and allowed Dom Bastien to become the oldest ever starter at Le Mans at the age of 74. 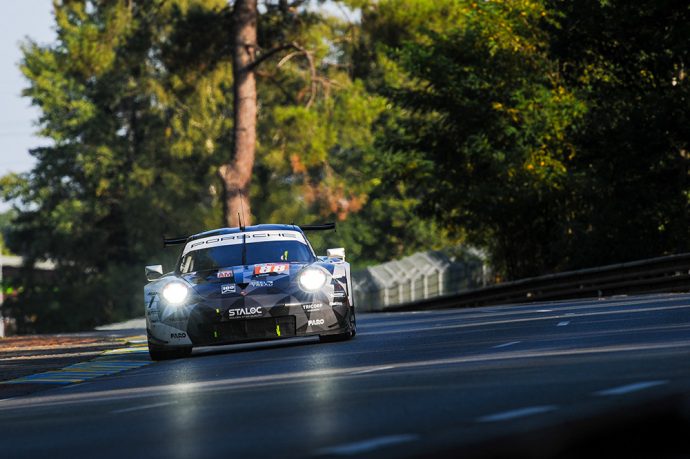 Thereafter the car lapped mostly reliably but could not complete sufficient mileage to be a classified finisher.