LMP3 has produced opportunities for a number of young and talented drivers since its inception in 2015.

One of the 2020 intake, 16-year-old Malthe Jakobsen follows a path into endurance racing taken by a number of his countrymen, Tom Kristensen’s pathfinding success still a factor it seems. 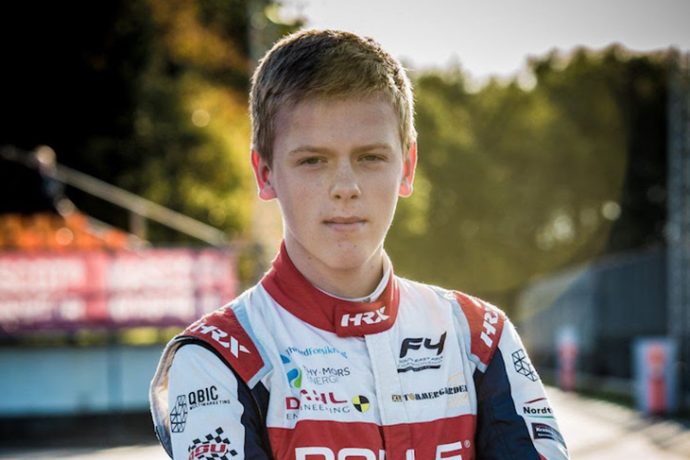 Since then he has been building a strong reputation for pace, consistency and maturity beyond his years in the ELMS, before getting the call-up from RLR to join regular ELMS team-mate James Dayson in the pair of Road to Le Mans races last week on the full Le Mans circuit.

That outing produced some eye-catching efforts including the second-fastest time in his very first track session on the Le Mans circuit! Those early session times were, for many of the fastest drivers, well inside the previous Le Mans lap records for LMP3 in the new spec, more powerful cars

With qualifying proving more of a struggle for the team, it was perhaps not the best time to have a teenage debutant at the wheel in traffic and on one of the most punishing circuits in the world. 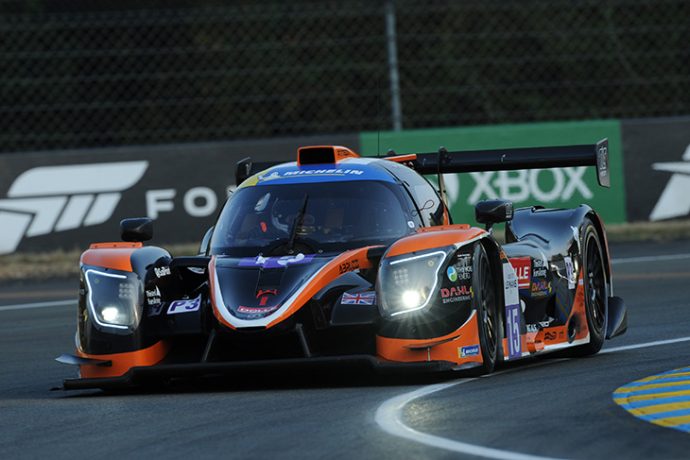 Jakobsen’s supporting act to Dayson though was just as eye-catching in the race as he has been for much of the season. 7th from 10th on the grid in race 1, 6th from 11th in race two saw him learning fast and taking scalps.

This boy is one to watch!

The DSC Editor caught up with Malthe, (pronounced Mellter) at Paul Ricard last month together with his manager and mentor, fellow driver Morten Dons:

Where did the journey into racing begin?

“It was a wholly family effort, my grandfather helped my father at that time and he didn’t really have any money at all either so he had to find sponsorship.

“Performing on track was everything to get it all to work. So his story is a bit similar to mine.

“When I was very young, nearly four years old, he took me to the local go-kart track. And then I started to go-karting when I was only three. The first eight, nine years until I was 12 years old. It was just for fun, like everybody else.

“I won the Danish Championship twice and the Nordic Champion once in the Rotax karts. 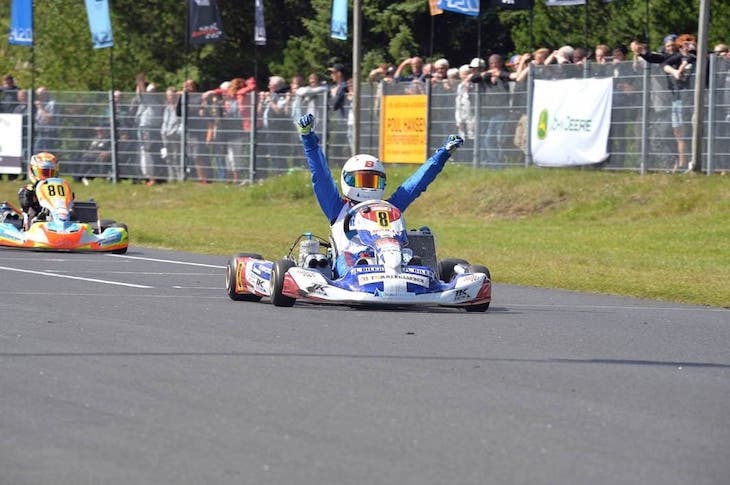 “Then my father told me if I wanted to do more with this, I needed to go and find some sponsors because he didn’t have money to help me. He could help me to find sponsors, but not pay me.”

So tell me about that first experience when you knew you had to go out there and raise that money. How did you go about it?

“My father has his own company where he and my uncle drive around and fix dents for customers in car workshops. He dropped me off at one of his customers and I went along and knocked on the bosses door and asked for some money!

“Morten (Dons), by then had met me and he helped me to put a proposal together to help those conversations, but it was a big step to knock on that door!”

What age were you when you knocked on that door?

“Right now I don’t really remember that much because I did it so many times since. 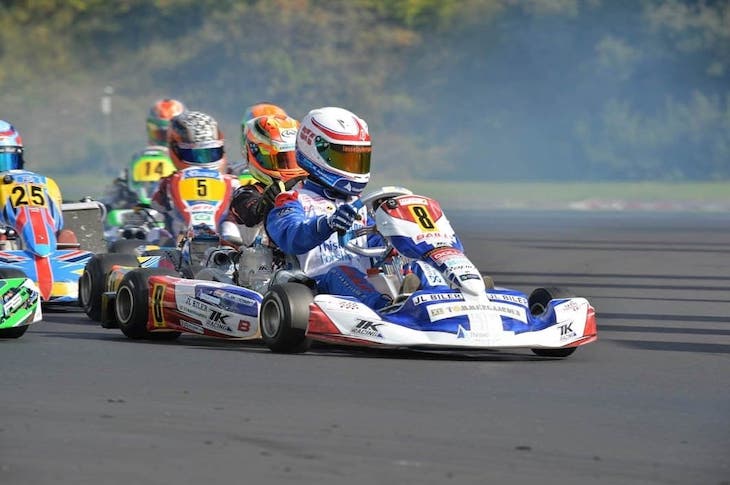 “But just from that day onwards, it was like “I want to get a professional racing driver at some point. So if this is what I have to do, then I do that.”

So was it successful that first time?

“When you don’t have parents with a lot of money. That’s what you have to do to get a career out of it.”

But they gave you something better than money?

“Yes, I think they did. They helped me to understand what you need to do to make it work and helped me to find the right people to work with.

“Right now is a very important time for this year and maybe next year too, because it’s now I really have to perform, to show what I can do on track, but still working in the background to raise the money I will need to progress in the short-term, to try to attract the attention that might get me the jump to where I can get a free ride or something still more!”

“To be a professional racing driver and earn money out of it!

“That’s what I always have said. I have never been too distracted by where in the sport that might be, sportscars, formula cars, it doesn’t really matter. I just wanted to be a professional.

“Looking at where I am now it would be fantastic to win Le Mans someday, but my goal is to be professional, and earn my living out of racing.

“A lot of people I know in Denmark are focused on “I want to be an F1 driver someday or get to be a World Champion but I would say it’s unrealistic to say that to the exclusion of everything else in the sport.”

At a time when the commercial marketplace is a very tough environment, raising money is tougher than ever, where would you like the next step to be?

“You’re right, it’s even harder now than it was before. But I’d like to be in a position where my performance allows me to bring less money to an LMP3 drive, or even an LMP2 drive. But I still think I’ve got a lot more to learn here.

“This was a big move for me, probably the biggest since I moved from karts to formula cars.

“That happened when I was 14, it was actually cheaper to go into F4 than to go to an international senior category in karting. I switched really early. It was so different from karting, so much to learn. But I’m happy today that we did it as early as we did because now I am better equipped to move forward.”

Is that to do with racecraft? Setting up the car?

Yeah, and just understanding the car when you’re driving and what to feedback to the team to develop on its potential.

And here in LMP3, there are more things that you can play with to a greater degree than an F4 car?

“Yes. And I think gave me a lot of experience compared to my age. I did two years in Formula 4. I did the first year only in Denmark and then, at the end of the season, we went to Asia because I was the best rookie and I won the last race out there.”

So how did you get from there, to sitting in the ELMS paddock and driving an LMP3 car?

“That comes down to my relationship with Morten (Dons) he comes from close by where my family lives. I knew him through the karting club right from the beginning and from when I was 12 he started helping with all the PR stuff for sponsors because he had been through exactly the same stuff as me.

“But also he didn’t have parents with money either. So his story and my story is quite similar with finding sponsors. So then he helped me and from the middle of 2018, he became both my manager and coach. 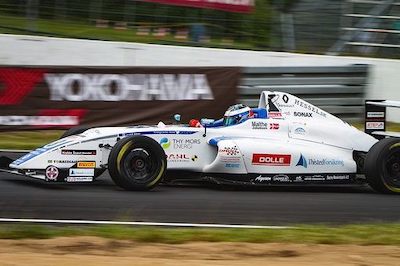 “Last year I won the Danish F4 Championship and had a test in the Formula Renault for Arden.

“I came down here to Paul Ricard to test but the budget for a full season was too much.

“I think you can drive even in an LMP2 cheaper than that. So that was too much.

“And then we were in Italy for the FIA Motorsport Games in F4 but we didn’t know what we were going to do after that.

“RLR were going to test a new driver at Donington and the plan was that I should come to watch and see what this part of the sport was all about, not to drive.

“Then on the Saturday before the Wednesday test the guy decided he didn’t want to test, so it was a quite short time to give notice and the team had arranged everything and paid for the track fee. Then Morten arranged that I could get a test drive instead.”

Morten Dons: “Nick (Reynolds wasn’t keen initially but I told him all about Malthe and I knew he could get a tiny bit of money together to go and do it, just to cover the cost. I told Nick I thought he would be good in the car and he eventually said yes.

“He went out the first time and Nick came to me and said, immediately, “I want to sign him.” 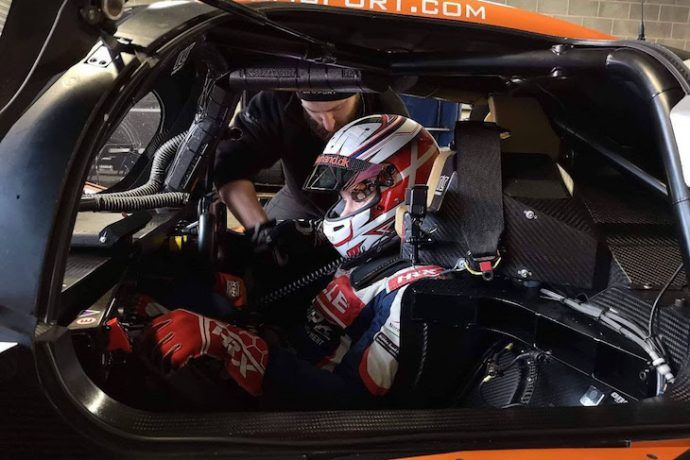 Malthe Jakobsen: “The car is so much faster than what I’ve tried before. For the first round, I had a lot of stuff to learn. But I think the hardest part of it was traffic in practice.

“But when you hit the race, that traffic is 10 times worse. I was prepared for traffic, but I think I underestimated the challenge of traffic compared to how bad it was.

“So that’s where I have learned the most from the first round to now. And also where I lost the most good at the first race. So that’s for sure what I can work the most on and that’s what I had to really think about when I was preparing for Spa.”

In this world, you are always going to be around people who are paying a lot of money to be here.

That’s a unique part of the team environment in sportcar racing.

How are you finding that aspect of it being all of a sudden, having been in a world where whether it’s a kart or a Formula car, you turn up with your helmet bag, and your overalls, and it’s all about you. All of a sudden, it’s not!

“I think I prefer this actually, compared to formula cars because now it turns into a team sport. I’m getting more and more used to it and starting to like it more and more, the deeper we get it into it.”

And how are you dealing with the inevitable compromises?

“I feel like it’s a little bit everywhere. Even from small things when you’re making seats and stuff like that.

“In Formula cars, you can do whatever you want. It just has to be perfect for you. But here you have to compromise a little bit everywhere to make it good for everyone.

“That works the same with set-up and driving time in the car and everything. For example, if one guy is a bit slow and steady and needs a bit more time in the car, then he will get that and then another guy won’t get as much. But that’s how the game is. If you want the team to be good and to have a chance to win, then that’s what you need to do.

“I think it should be realistic in the ELMS this year to get finishes on the podium as we saw at Spa, if you just keep a clean race, you can make up so much. It’s not always about the lap times. It’s more important that the bronze drivers and everybody in the car make no mistakes.”

“We are just about getting to the point of talking about possibilities for next season. The case to stay in this paddock is very strong, either with another year in LMP3 or, if the right deal comes around, maybe, just maybe in LMP2.”