The 2020 Nürburgring 24 Hours has been red-flagged after heavy rain at the seven-hour mark saw multiple cars off track through the field.

The weather-related drama at 22:30 local came as three Audis were battling for the lead, Christopher Haase spinning but missing the barriers in pursuit of leader Dries Vanthoor.

Before that though both of the AMGs which had been an early race runaway duo in the lead of the race had crashed out, Manuel Metzger, leading in the #4 HRT Mercedes into the barriers on the exit of the Mini Karussel, the car snapping to the right either after a failure or on oil or water on the track surface, the impact causing major damage to the front of the car.

Night and rain challenge their victim: Leader of the race #4 Manuel Metzger @MercedesAMG with the Crash 😱 #24hNBR pic.twitter.com/Hi7VKTtjXC

Maro Engel, looking on in dismay from the garage did not have much time to reflect, he was about to climb aboard his other N24 ride, the #6 HRT car down in 11th, the #9 GetSpeed car into the lead, now tracked by Dries Vanthoor 30+ seconds back in the #1, with the #29 #3 and #5 in formation behind. 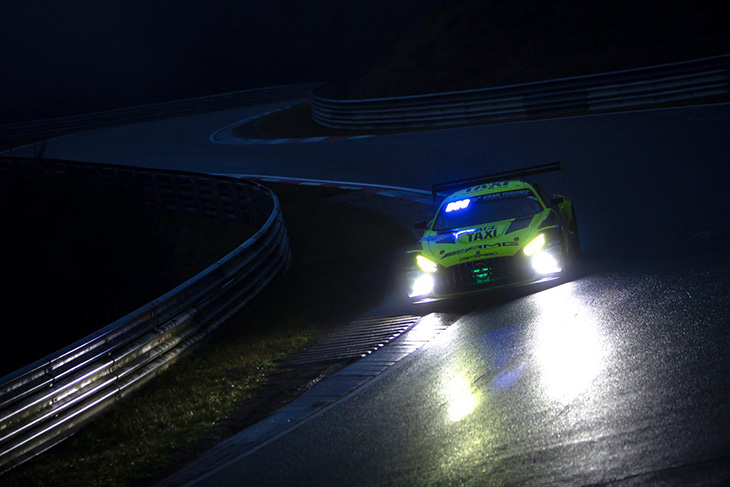 There was a minor drama for Maxi Götz in the leading car, a low percentage move spinning the #63 SP7 Porsche. A penalty looked on the card but within the hour that was immaterial, Götz had passed the car over to Raffaelle Marciello who crashed out of the lead on his outlaw, a lost wheel suspected, with the car suffering further damage under tow en route to Parc Ferme, both AMGs that had dominated thus far were out. 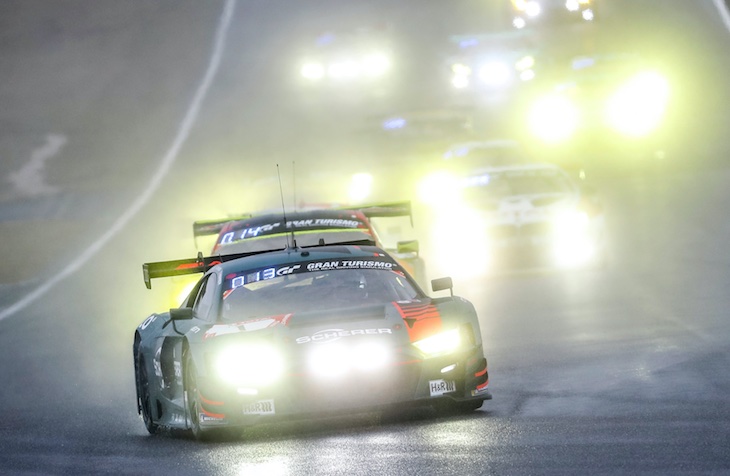 Suddenly it was an Audi 1,2,3 and the rain was stair-rodding down, the trio, #1,#3 and #29, Vanthoor, Haase and van der Linde just 10 seconds apart, Haase though lost control at Hatzenbach and was very fortunate to stay out of the armco.

With several other cars finding zero grip as the rain got heavier there was no surprise when race control red-flagged the race, effectively pressing the pause button.

With heavy rain predicted until just before dawn this might be a long red flag.