It was a Monza round with no spectators but with a Ferrari win in Race 2, as Louis Prette and Vincent Abril in their AF Corse APM Monaco car took their third success of the season and relaunched their title bid, after struggling with pace during the entire weekend.

They made perfect use of a safety-car after the pit stop window, which allowed to wipe out the gap with regard to the Teo Martín McLaren of Miguel Ramos and Henrique Chaves, who had the race under control up to that moment, after signing pole in the morning. The duel between Ramos and Abril was breath-taking and the Monegasque had to sweat to steal the position.

The Portuguese duo eventually finished second and keeps an 8-point advantage in the standings over Prette-Abril and 15 over Yoluc-Eastwood (TF Sport Aston Martin), today only 10th after an off-track in the first chicane. 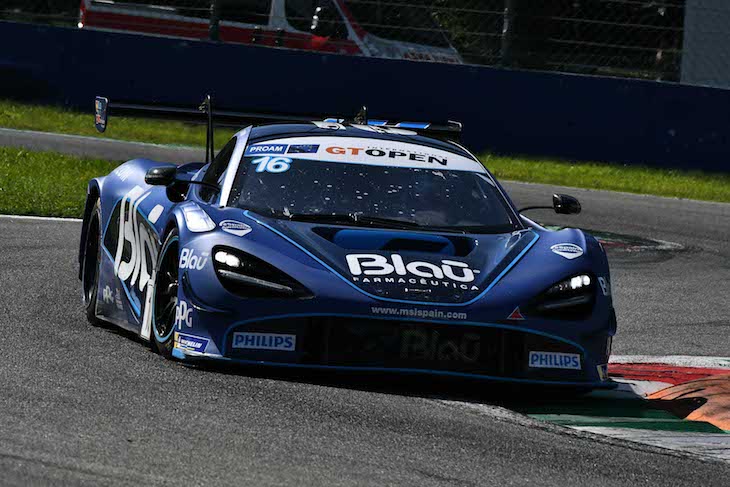 Teo Martín Motorsport got more satisfaction thanks to Marcelo Hahn-Allam Khodair, who finished third overall and took their second Pro-Am win of the season, which gives Hahn a 6- point margin in the class standings over Krupinski-Klien (JP Motorsport Mercedes), today 2nd ahead of the Optimum Motorsport McLaren of Brendan Iribe-Ollie Millroy.

It was a lively start with three cars abreast (the McLarens of poleman Chaves and Khodair and the Bentley of Crestani), but there was no drama. Chaves kept the advantage and pulled away protected by Khodair, then Crestani, Eastwood, Di Amato and Klien who fought, trading positions, Prette and Nesov who was first Am runner.

While the two TMM McLarens pulled away and had an 8-second gap by lap 10, Crestani and Eastwood were in a close fight for third and Klien was fifth ahead of Nesov and Prette after Di Amato was forced to stop twice in the pits because of a technical issue.

On lap 14, the driver change window opened and Chaves, with a surprising strategy move, was among the first to stop, together with Crestani, Prette and the Optimum McLarens.

After all stops, on lap 20, Ramos led by 14 seconds from Marcelo Hahn, and 18 from Krupinski, who was soon passed by Abril; then came Negro, Yoluc, Baruch, Mettler and Moiseev. On lap 25 though, Baruch touched Yoluc at the first chicane, with the Aston spinning and stuck on a kerb. The safety-car was deployed to allow the Aston to rejoin the race. The Israeli received a drive-through.

On lap 27 the race restarted and immediately, with gaps erased, the battle for the lead restarted between Ramos and Abril. The Monegasque attacked continuously but the Portuguese resisted well. It would take good slipstreaming for the Ferrari to be successful and get by at the first chicane in lap 31. Hahn is third, clinching his first Pro-Am win of the season, while Liebhauser took the Am win from Moiseev.