Kyle Marcelli and Nate Stacy in the #60 Kohr Motorsports Aston Martin Vantage GT4 won the first of two Michelin Pilot Challenge races from Mid-Ohio. The #60 Aston Martin crew started the race from pole, but their win was far from easy as they recovered from a refuelling issue and battled multiple cars in the late stages of the race.

Marcelli made a pass for the lead on Eric Foss in the #56 Murillo Racing Mercedes-AMG in Turn One with just thirteen minutes left to run. Foss tried to take the position back by going around the outside at the Keyhole, but he ran out of room conceded the lead and eventual win to Marcelli and the #60 Aston Martin.

The #39 Carbahn Motorsports Audi R8 GT4 of Jeff Westphal and Tyler McQuarrie ended the race in second. The #39 Audi and the #60 Aston Martin were both prominent fixtures at the sharp end of the field after starting the race on the front row of the grid.

With the #4Winward Racing Mercedes-AMG GT3 of Russel Ward and Indy Dontje rounding out the podium, it meant that the top three runners from qualifying all finished in the same order in the race. 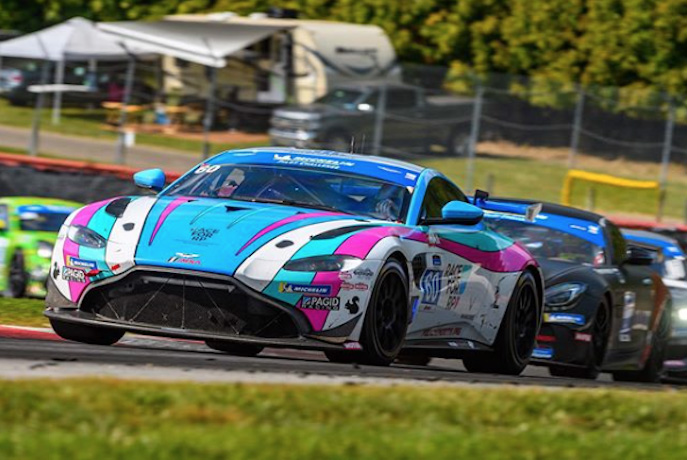 The only car to try something significantly different on strategy was the #56 Murillo Racing Mercedes-AMG GT4. While other cars took advantage of Full Course Yellows to make pitstops, the #56 Mercedes-AMG opted to stay out and gain track position.

They successfully gained track position, leapfrogging quicker cars like the #60 Aston Martin and the #4 Audi, but they ended up needing to make a late pitstop after coming up just five minutes short on fuel.

There were a handful of incidents at the Keyhole as drivers tried to force passes in gaps that were not wide enough. The #3 Motorsports In Action McLaren 570s, winners at Road America earlier in the year, were given a drive-thru penalty after Sheena Monk collided with the #82 BimmerWorld BMW M4 GT4.

Championship-contenders Dylan Murray and Jim Cox in the #35 Riley Motorsports Mercedes-AMG also fell victim to the Keyhole. Cox tapped the rear of the #26 Fast Track Racing BMW which sent the #26 BMW into the #7 Archangel Motorsports Porsche Cayman. The #7 Porsche spun, and Cox was left with no way around, making contact that would eventually lead to the retirement of the #56 Mercedes.

In contrast, it was a cleaner race in TCR, where the #23 FAST MD Racing Audi RS3 LMS of Max Faulkner and James Vance took home the win. Like the #60 Aston Martin in GS, Faulkner and Vance also converted pole position to a win, cruising to a victory by over eight seconds.

Ryan Eversley and Taylor Hagler in the #77 LA Honda World Racing Civic TCR ended the race in second. For Hagler, who is a part of the NSX GT3 Academy Class of 2020, this is her first podium in IMSA competition.

Race Two for the Michelin Pilot Challenge Series at Mid-Ohio is tomorrow, Sunday, with the green flag set for 10:35 AM EDT/14:35 UTC.