The #60 Kohr Motorsports Aston Martin Vantage of Nate Stacy and Kyle Marcelli completed the weekend sweep at Mid-Ohio, claiming victory in Race 2 by 6.463 seconds. Like their win yesterday, however, it was not without a sprinkling of drama.

Unlike yesterday’s race, the #60 Aston Martin was not the fastest car on the track. Stacy was running in third after being passed by the #57 Winward Racing Mercedes-AMG and the #35 Riley Motorsports-AMG earlier in the race. Those two cars were running first and second when they came together.

The contact sent the #35 Mercedes-AMG onto the grass just shy of China Beach and while the #57 Mercedes-AMG got away on track, they did not escape the ire of race control who handed them a drive-thru penalty.

CONTACT between the 57 and 35 while battling for the lead! #IMPC/#IMSA/#MidOhio pic.twitter.com/9B5syBISXA

That gave the lead of the race to the #60 Aston Martin who was able to cruise to a win with their two stiffest competitors having run into one another. There was drama within the Kohr Motorsports stable over minimum drive time, however.

Stacy, after starting the car, was placed back into the Aston Martin after the team believed they took him out of the car just seconds short of the minimum drive time requirement.

The #35 Riley Motorsports Mercedes-AMG of Dylan Murray and Jim Cox recovered from the contact to finish the race in second. While it may be a podium finish it will be a sour one for the team who has had their championship efforts severely hampered by torrid luck this season.

The #39 Carbahn Motorsports Audi R8 GT4 of Jeff Westphal and Tyler McQuarrie finished third. They moved into the final podium spot after the #38 BGB Motorsports Porsche 718 Cayman needed to make a late pit stop for fuel.

In TCR, the #61 Road Shagger Racing Audi RS3 LMS TCR of Jon Morley and Gavin Ernstone claimed victory after an incredible economy run from Morley that saw him run over an hour on one fuel tank. 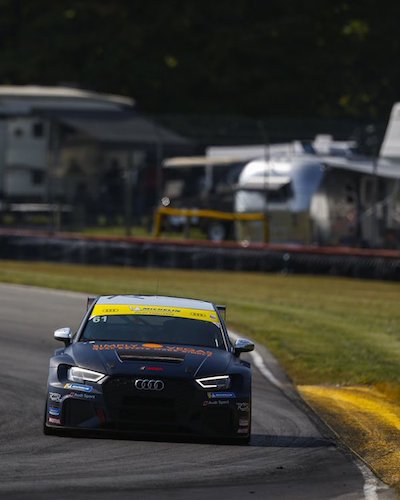 Gabby Chaves in the #33 Bryan Herta Autosport Hyundai Veloster N TCR was catching Morley, who was desperately trying to save fuel, but ultimately Chaves ran out of time, crossing the line 1.557 seconds behind the #61 Audi.

The story in TCR wasn’t so much who finished on top, but rather whose chance at a strong finished were shattered by mechanical failures.

The #77 LA Honda World Civic TCR of Taylor Hagler and Ryan Eversley looked like the favourite for the win. Hagler started the race from pole and kept the car at the front of the field before Eversley climbed aboard and worked his way into the lead.

With under twenty-minutes to run, though, the car went up in smoke in a dramatic mechanical failure for Eversley while he was leading the race.

The #CartoonAnvil has struck @taylorhaglerms & @RyanEversley in the 77 Honda Civic TCR as the car suffers a failure while leading the #IMPC race with under twenty-minutes to run! The poor luck this team has had….. #IMSA/#MidOhio pic.twitter.com/VkjOpDOoLX

They were the second TCR leader to suffer a mechanical failure while leading after the #5 KMW Motorsport Alfa Romeo Giulietta of Roy Block and Tim Lewis had a turbo failure.