8 am local time saw the field restart behind the Safety Car after 10 hours under red flag conditions. Heavy rain calling a halt to proceedings late on Saturday night (this the seventh time the race has been red-flagged in its history). 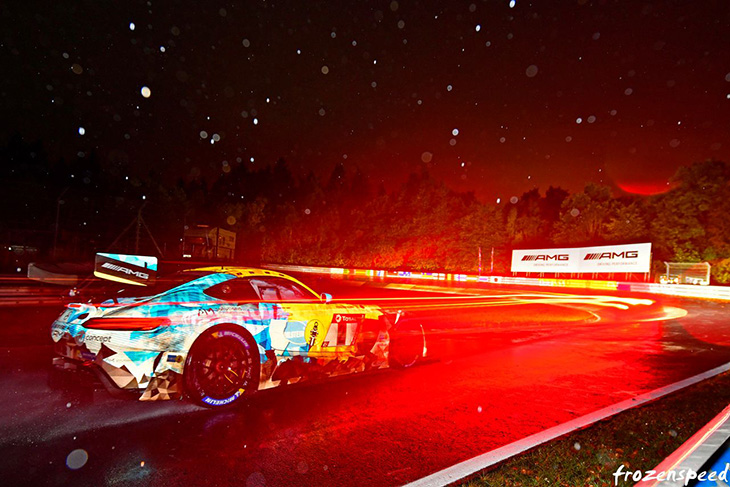 The Safety Car led the field for just a single lap before green flags flew once again – the conditions still wet and grey but infinitely more drivable than the conditions that brought out the red flags.

Happily, with a number of cars damaged, and in some cases presumed retired, repaired overnight back in action there were 90 cars (from the original 97 race starters, fit to take the restart.  The ‘back from the dead’ cars included the #100 Walkenhorst BMW, crashed at Brünnchen, and sadly the car, with the same driver, had another rotation at more or less the same point on the green flag lap! With some marshal assistance, it was soon back on its way. Also repaired was the #9 GetSpeed AMG, Maxi Bühk rejoining in 20th slot.

16 cars restarted on the lead lap, nose to tail of course, and the trio of Audis were soon working together to try to break the tow from a pair of chasing BMWs. 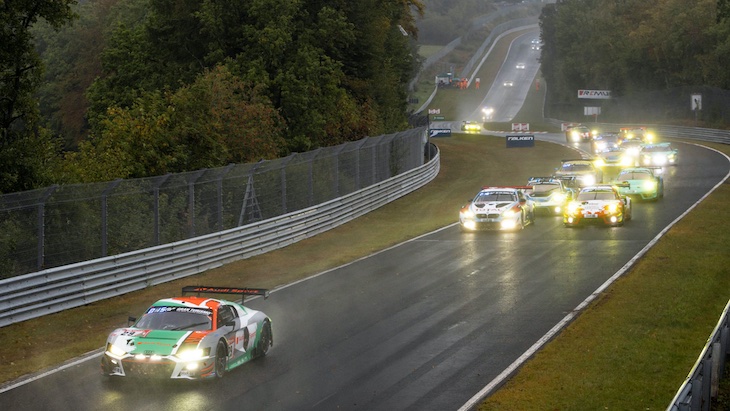 Frank Stippler restarted in the #1 and led until the second flying laps when Rene Rast, in the #29, and with a 32-second pitstop penalty to come after a pre-red flag caution zone infringement, was in a hurry to get by, a great move into and through the first and second turns saw him take the lead as the Audis edged away. 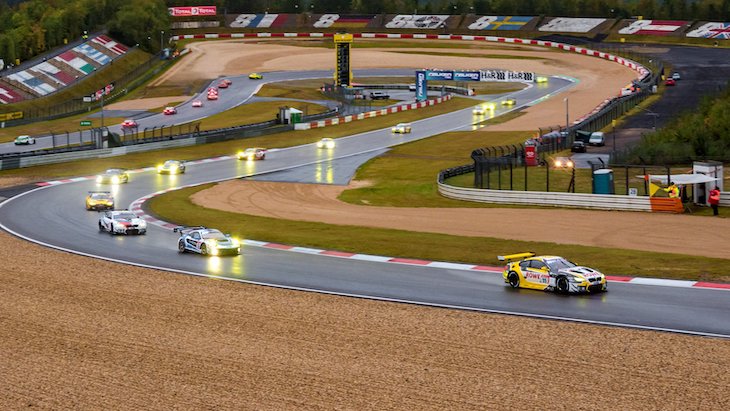 Haase in the #3 Audi also got by Stippler next time around and on the Dottinger Höhe he was right under Rast’s rear wing, the pair over to the far right-hand side of the track, Hasse then cutting to the extreme left and dragging by to lead.  Behind the Audis, Sims in the #99 ROWE and Sheldon van der Linde in the #42 Schnitzer BMWs were trying to hang on to the Audis, Mark Engel in the #6 AutoArena AMG though had other ideas and found a way by both to go fourth, Dennis Olsen in the #18 KCMG Porsche was on the move too and he too found a way by to pursue Engel.

Engel was the first of the lead group to pit, but then immediately hit trouble, the car back in after a lap of the GP loop, with a front wheel rolling off the AMG and coming to rest in the middle of the track on the start/ finish straight, after some near misses from cars emerging from the Nordschleife it was recovered, Engel rejoining having lost almost 4 minutes to the lead battle. 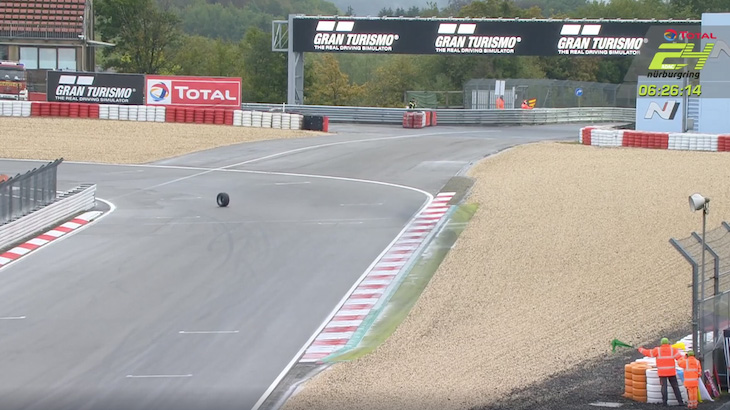 Behind the leading dramas there was a further developing battle with another pair of BMWs, the second Rowe BMW and the #101 Walkenhorst M6 doing battle with the 10Q AMG and the second KCMG Porsche, Krognes in the #101 taking the overall lead as he stayed out for a lap as the remaining SP9s pitted, the #29 taking its penalty and dropping back into the chasing pack as a result.

There was drama involving Jules Gounon in the #5 Audi, a sideways swipe from the Audi on the #89 Giti Tyre VW Golf which pitched Celia Martin off track and into the barriers, the Golf requiring a tow back.

Dennis Olsen emerged from the pit stop cycle in second place but now 40 seconds down on a charging Christopher Haase, Frank Stippler though was finding speed again after a tricky patch in the second part of his previous stint, he closed the gap to the Porsche and drove by for second place, followed through on the GP loop by another hard charger, Stippler tripping over a slower car, and catching the grass as a result, he gathered it all up but the #42 BMW was up into second.

There was drama for the race leader with just over 5 hours remaining, Haase missing his braking point at Aremberg on lap 54 ceding over 10 seconds to the chasing BMW .

At the next stop Christopher Mies was given slicks on the #29 Audi, perhaps a strategic call to assess whether that would work for the leading car, it didn’t! It was inters for the #3 when the pit cycle came around.

On a different pit cycle, Nico Müller took the lead in the #1 Audi with the #3, now in the hands of Mirko Bortolotti fending off a spirited challenge from Martin Tomczyk in the #42 Schnitzer BMW and under 20 seconds off the lead and Yelloly looking to join in the fun, closing in too in the #99 ROWE M6 GT3.

The #42 though was sitting on a penalty for a short pit stop – by just 0.1 of a second, it will need to serve a 32 second stop and hold next time in. Yelloly was through to second before that point as the leading group homed in ion the 4 hours to go mark, the #1 dropping back on its out of sequence pit cycle, the #3 (Bortolotti) leading Yelloly by just 4 seconds, Tomczyk a couple of seconds further back with Philipp Eng in the #99 ROWE BMW fourth holding off Lance David Arnold in the #31 Frikadelli Porsche.