Bastian Buus and Jan Kasperlik scored their sixth class win of the season and the third consecutive overall victory at the Zandvoort circuit in the Netherlands for the Allied Racing Porsche team.

The Toyota GR Supra GT4 took its first class win in the GT4 European Series in the hands of Gael Castelli and Stéphane Lémeret (CMR), with Selleslagh Racing Teams Bob Herber taking the Am honours at Zandvoort.

The German team started the race from pole position and overcame a late safety car phase after a turn 2 crash involving the Centri Porsche Ticino car to win the second race of the weekend and extend their Pro-Am lead.

Buus and Gael Castelli (#8 CMR Toyota) were first and second into turn one. Behind them, Joel Camathias (#718 Centri Porsche Ticino) moved into third place overall after the start, before being passed by Nicolaj Møller-Madsen (#21 Allied Racing Porsche) and Thijmen Nabuurs (#17 V8 Racing Camaro).

The #22 Allied Racing Porsche quickly built a two-second advantage over Castelli and the young Dane was able to maintain that advantage before handing over to teammate Jan Kasperlik during the mandatory pit stops.

Further back, Valentin Hasse-Clot was climbing up the order rapidly, having started from the seventh row of the grid. After five laps the #27 AGS Events Aston Martin was already back in eighth place overall, with Silver Cup title rival Gabriele Piana (#111 RN Vision STS BMW) in tenth place. Before the pit window opened Hasse-Clot had clawed his way back to fifth place overall and third in class.

At the end of lap 19, Buus handed over to Kasperlik. The German pulled out of the pits ahead of the #8 CMR Toyota, now driven by Stéphane Lémeret. Jop Rappange in the V8 Racing Camaro had taken third place overall, with Jörg Viebahn behind in fourth.

Contact between the #12 Borusan Otomotiv Motorsport BMW and the #718 Centri Porsche Ticino resulted in the Swiss Porsche hitting the barriers hard at turn two. After a full course yellow, the safety car was deployed to clean the track and repair the barriers.

At the re-start, Kasperlik kept Lémeret behind him, while Rappange dropped behind Viebahn. The young Dutch driver was back in third overall soon, with the #27 Aston Martin of Theo Nouet and the #99 V8 Racing Camaro of Duncan Huisman also passing Viebahn, while fighting for the final podium position in the Silver Cup.

After 31 laps, Kasperlik was the first to cross the finish line to take another with for Allied Racing. Lémeret gave the CMR Toyota its first win in the GT4 European Series, finishing half a second behind Kasperlik, with Nabuurs completing the overall top three. Nouet came home fourth, taking the final podium place in the Silver Cup, ahead of the #99 V8 Racing Camaro. 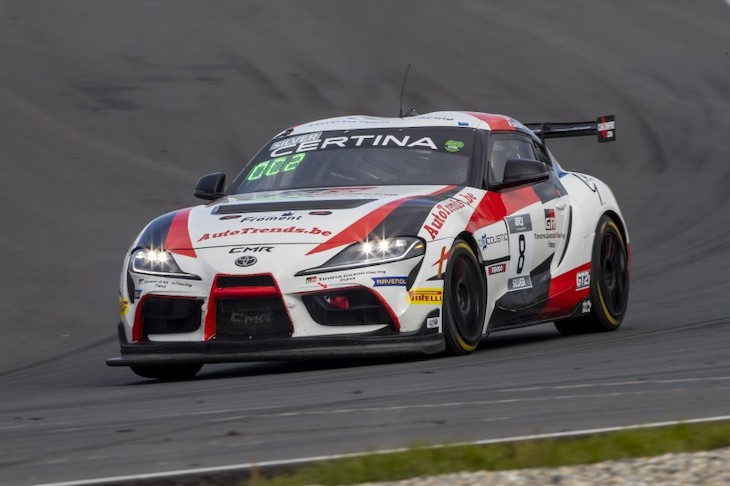 Bastian Buus, #22 Allied Racing Porsche: “It was good. A good weekend overall, I think the best so far. It was nearly a perfect weekend. Fastest in both practices, fastest in Q2, P4 in qualifying 1 and the overall win in both races. We’re really happy.”

Jan Kasperlik, #22 Allied Racing Porsche: “Bastian had a fantastic start and he handed over with a three-second gap. I still had some tyres left, so I was able to keep the pace after the driver change. The safety car made it exciting again, but I did a good safety car restart and had a gap of two, three car lengths which I could keep until the end. So, I am really happy!”

Gael Castelli, #8 CMR Toyota: “I am very, very happy. It took us some time to get this victory. We worked hard on the car to achieve this. I am really happy and hope it is not the last one!”

Stéphane Lémeret, #8 CMR Toyota: “Finally! We really wanted this. We reached our goal from the start of the season to be fighting for victory in the second half of the season. The team is fantastic. It’s a pleasure with them and the cooperation with Toyota is fantastic. I did not take any risk, because we were winning in Silver and this was our goal. Next time we win overall.”