The fifth round of the 2020 Autobacs Super GT Series at Fuji Speedway will be the most important race of the season, for many reasons.

This will be the first race of the Super GT season that will be open to spectators, with a limited capacity of 5,000 spectators that are expected to enter the gates of Fuji Speedway this Saturday and Sunday. When the GT Association (GTA) and Chairman Masaaki Bandoh announced the revised 2020 calendar on 4 June, the plan was always for the first four rounds to be held behind closed doors, and if the coronavirus pandemic had been mitigated well enough, then the possibility was there for spectators to attend starting from the second half of the season, which begins here at Fuji. 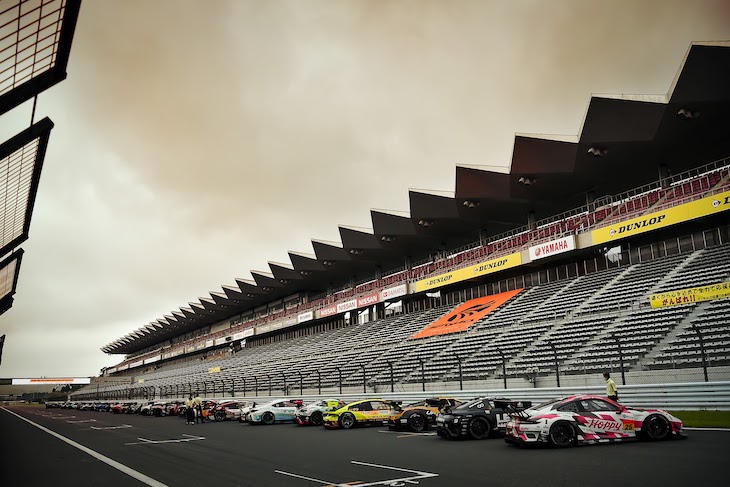 Thanks to the GTA’s protocols for preventing the spread of infections throughout the paddock, Chairman Bandoh was confident enough to confirm three weeks ago that the series will proceed with welcoming spectators back to the track this weekend.

Japan’s other top-flight racing series, the Super Formula Championship, has held two rounds already with a limited number of spectators in attendance. The Fuji Super TEC 24 Hours was also open with a limited capacity. Two weeks ago, the Japanese government allowed sporting venues to operate at 50 percent capacity if they so choose to do so, which could allow up to 5,000 more spectators per round to attend the remaining races of the 2020 Super GT season.

But it is entirely understandable to feel apprehensive about allowing spectators back into the circuit. After all, many countries are now preparing for, or in some cases, resisting any attempts to prevent a second wave of COVID-19 outbreaks that are either in progress or set to strike, which makes the timing of series and circuits’ decisions to re-open to spectators seem poor. Just within the microscopic sports car racing community at large, the recent outbreak within the Porsche works racing team was another reminder that the road back to something resembling the normal we once knew is still going to be difficult.

So before getting into the particulars of this upcoming fifth round of the 2020 Super GT season, we at DSC hope for the current and continued well-being of everyone who will be in attendance at these remaining races, from the team members, to the marshals, to the spectators.

It has been a while since we last previewed an individual round of the Super GT Series, but now that there will be a small number of spectators in attendance, and now that we are in the championship rounds of this unique season, and have cycled through all three venues on the calendar at least once, it seems appropriate to take a look at the state of play going into this round. This is the third race at Fuji to be held under the title of the “Takanoko Hotel Fuji GT 300km Race,” with the luxury hotel in Matsuyama, Japan, once again purchasing the naming rights to this event. 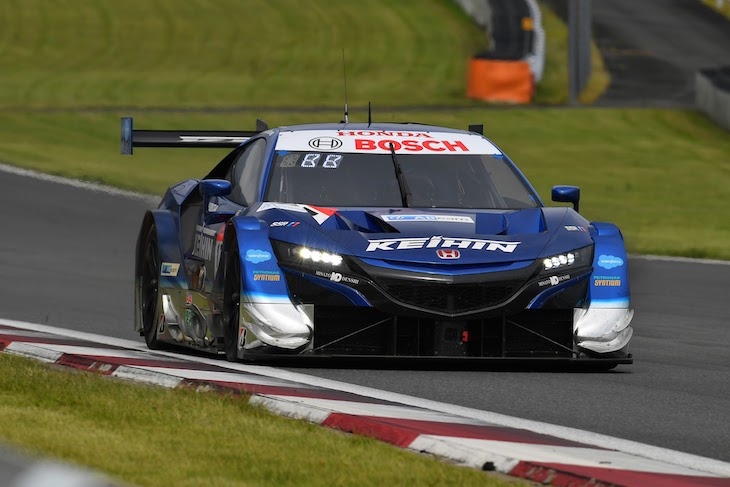 We’ve raced twice at Fuji already this year. In July, the number 37 KeePer TOM’s Toyota GR Supra of Ryo Hirakawa and Nick Cassidy won the season-opener to claim the fifth-generation Supra’s maiden victory in its debut. In August, the number 17 Keihin Honda NSX-GT of Koudai Tsukakoshi & Bertrand Baguette struck back with a victory in the new front-engined NSX-GT.

Tsukakoshi and Baguette won the most recent race at Motegi to take the lead in the GT500 Championship standings, but it’s still very close at the top with just five points separating the top three teams, and the top seven covered by just 18 points.

Success Ballast will be a factor with the #17 Keihin NSX-GT on 86 kilogrammes of Success Ballast. In GT500, of course, it is a mixture of a physical weight handicap plus a fuel flow restrictor. This car will carry “only” an additional 36 kilos of weight, but this is counterbalanced with a stiff “Level 3” fuel flow restrictor which takes their fuel burn down from the standard 95 kg per hour down to 85.5 kg/h, which will severely limit their potential for outright speed down the nearly 1.5 kilometre front stretch. 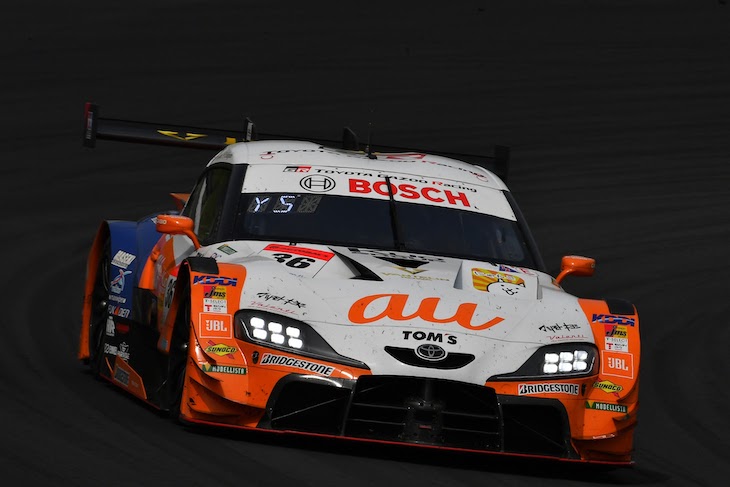 The two TOM’s Toyota GR Supras sit second and third in points. The #36 au TOM’s GR Supra of Yuhi Sekiguchi and GT500 rookie Sacha Fenestraz finished 2nd in the first two rounds held at Fuji, while the #37 KeePer TOM’s Supra of Super Formula championship leader Hirakawa and reigning SF champion Cassidy won from pole in the first race, as mentioned. Not to mention, Hirakawa and Cassidy have scored points in all four of the previous races. The two cars had a coming together at Motegi but will hope for better fortune here at Fuji Speedway 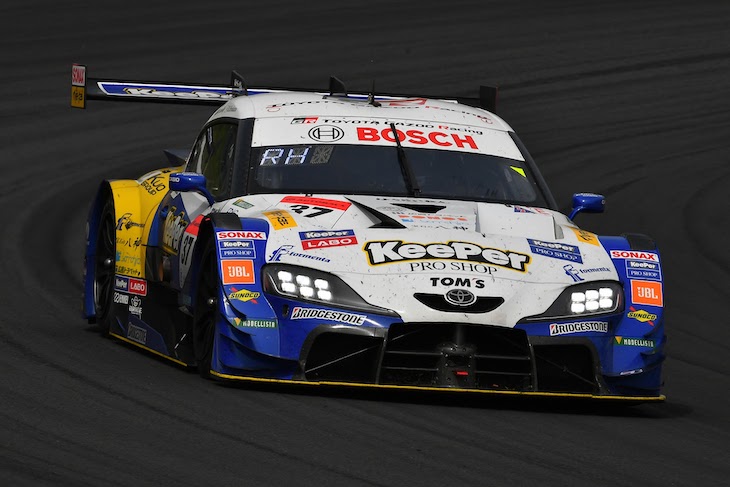 Both cars will be on the “Level 2” fuel flow restrictor (88.6kg/h), with the au Supra carrying 48kg of Success Ballast weight and the KeePer Supra carrying 42kg. For these top three cars in the championship, the setup is so important, and so too will be the work of the drivers and mechanics in order to ensure a points-paying finish. 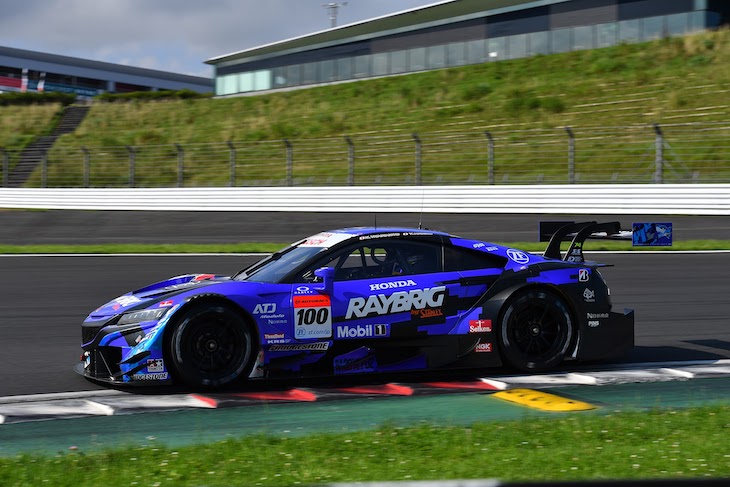 This could be a big opportunity for the next group of four teams to make a push up the standings. The #100 Raybrig NSX-GT (Naoki Yamamoto/Tadasuke Makino) is 4th in points, with a 2nd place finish at Suzuka in August. They’ve scored points in every round. 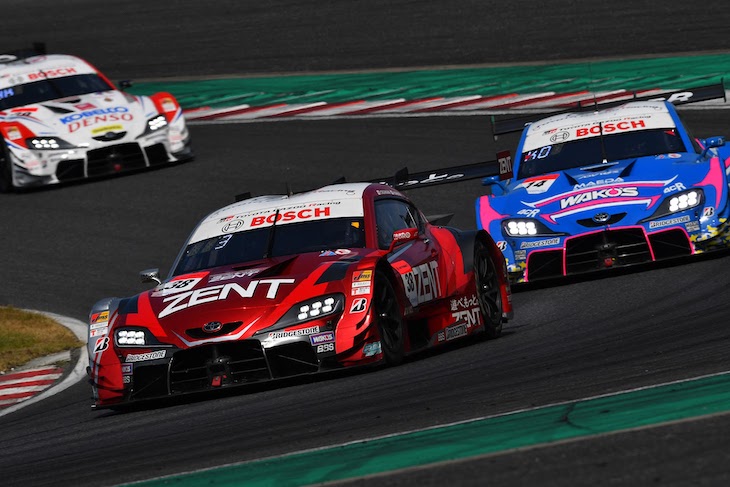 So too has the #14 Wako’s 4CR GR Supra (Kazuya Oshima/Sho Tsuboi) in 5th, who’ve finished 3rd in the two previous races at Fuji. Tsuboi will be a driver to watch, coming off his first Super Formula victory in Okayama. The #38 ZENT GR Supra (Yuji Tachikawa/Hiroaki Ishiura) took pole position and finished 2nd at Motegi, but now they return to a track where Tachikawa has won a record nine times in his career, and Ishiura has won four times. 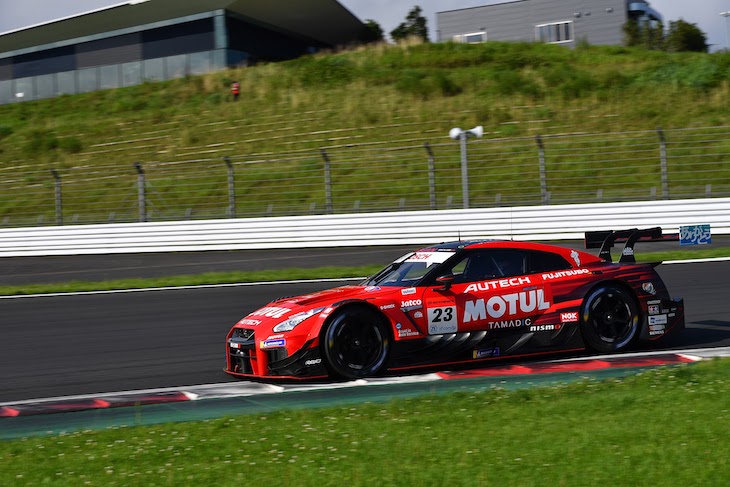 These three cars will be carrying the “Level 1” fuel flow restrictor (91.8kg/h).

The #23 Motul Autech Nissan GT-R (Tsugio Matsuda/Ronnie Quintarelli) won at Suzuka to kickstart Nissan’s 2020 campaign, and both drivers have excellent track records at Fuji in their own right. Matsuda has five wins, Quintarelli has three. They’ll have 50kg of Success Ballast weight, and crucially, are still on the standard fuel flow limit of 95kg/h. 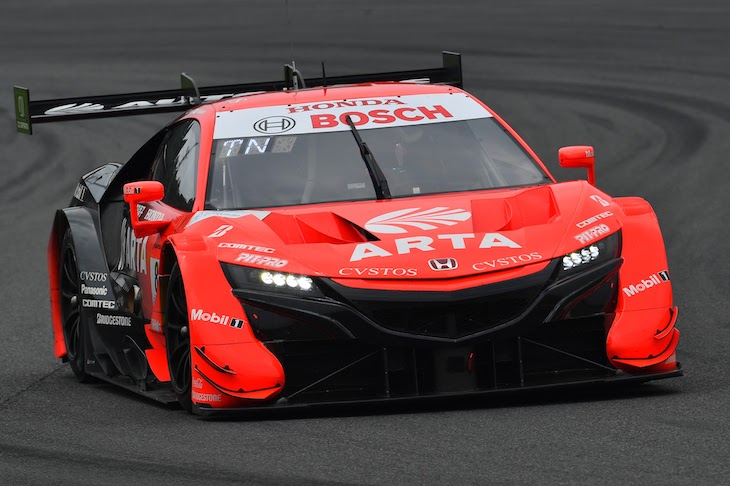 For the other eight teams that aren’t encumbered by heavy Success Ballast penalties, this race could effectively be the last chance to spark a late-season title run. Second-half comebacks like the ones in 2012 and 2013 have happened before, and there are many strong teams that have a chance to win.

In particular, the #8 ARTA NSX-GT (Tomoki Nojiri/Nirei Fukuzumi) hasn’t scored points since the opening round of the season, but they were in contention to win Round 2 at Fuji before a spin ended their chances. The #12 Calsonic Impul GT-R (Daiki Sasaki/Kazuki Hiramine) has displayed incredible speed but has had no luck whatsoever in the first four rounds. Both are being picked as favourites to win this weekend. For the latter, it’s a chance to end a four-year winless drought for Team Impul. 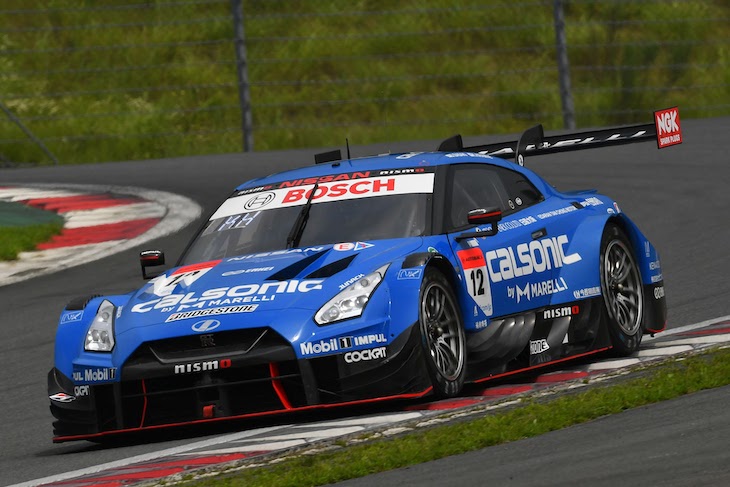 The #39 Denso Kobelco SARD GR Supra (Yuichi Nakayama/Heikki Kovalainen) has scored points in every race including two top-six finishes at Fuji this year, but this is Kovalainen’s first trip to this speedway in the new car, having missed the first two races. The #3 CraftSports Motul GT-R (Kohei Hirate/Katsumasa Chiyo) has also scored points in each of the first four races, and Chiyo is still searching for that elusive first premier class victory. Either of these two teams could still make a late-season push into championship contention. 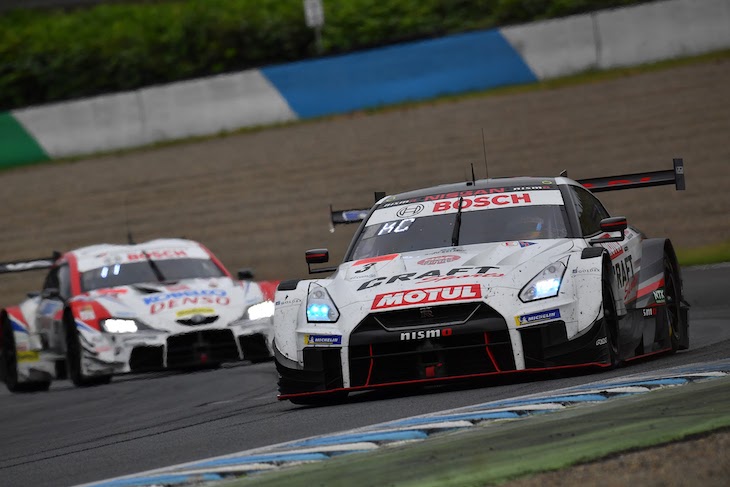 And a breakthrough podium at Motegi for the #16 Red Bull Motul Mugen NSX-GT (Hideki Mutoh/Ukyo Sasahara) has Team Mugen positioned as the best Yokohama-clad team in the field, but the #19 WedsSport Advan GR Supra (Yuji Kunimoto/Ritomo Miyata), and #24 Realize Corporation Advan GT-R (Mitsunori Takaboshi/Jann Mardenborough) are each desperate for a solid result this season. The Dunlop-clad #64 Modulo NSX-GT (Takuya Izawa/Hiroki Otsu) has shown flashes of real speed this year, taking the pole at Suzuka in August.

GT300 still has the same jam-packed 30-car entry as before. In Round 1 at Fuji, the #52 Saitama Toyopet GreenBrave Toyota GR Supra of Hiroki Yoshida and Kohta Kawaai took its first victory on its debut, then in Round 2, the #2 Syntium Apple Lotus Evora MC of Hiroki Katoh and Masataka Yanagida ended a long winless drought for the Cars Tokai Dream28 squad. 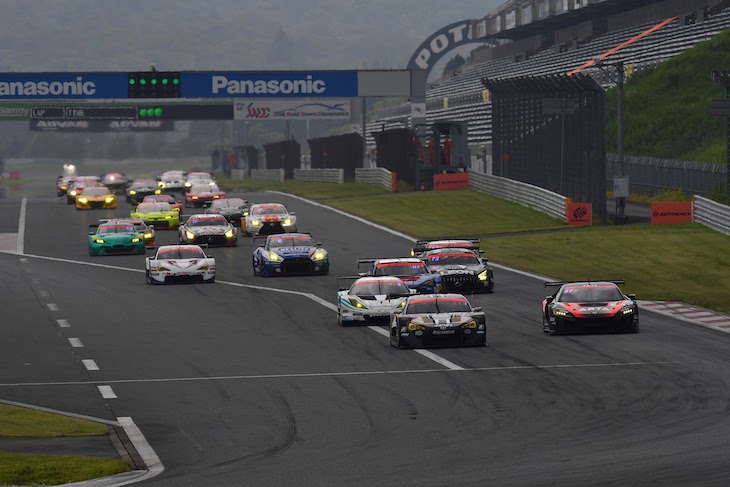 Both teams are still very much in championship contention, but three more front-runners emerged in the first half of the season.

The #11 Gainer TanaX Nissan GT-R GT3 (Katsuyuki Hiranaka/Hironobu Yasuda) entered the discussion with a win at Suzuka, and now leads the GT300 Championship. Then the #65 LEON Pyramid Mercedes-AMG GT3 (Naoya Gamou/Togo Suganami) won at Motegi to bolster their title chances and move into 2nd in the standings. All the while, three straight top-four finishes have the #61 Subaru BRZ R&D Sport (Takuto Iguchi/Hideki Yamauchi) 3rd in points. 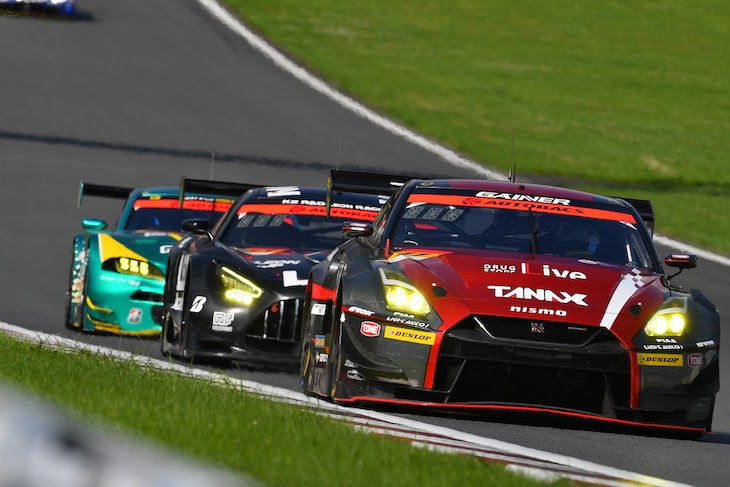 Of course, thanks to the new, more aggressive Success Ballast payout of 3kg per championship point, all three of these cars will now be riding with the maximum 100 kilos of Success Ballast on board. The #2 Syntium Lotus is now fourth in the standings, and the #52 GreenBrave Supra is now fifth, both of these cars now have 93kg and 75kg of Success Ballast, respectively, working against them. In the case of these five teams, being able to finish in the top ten and score any championship points would be as good as a victory.

There are quite a few teams further down the points table that also have the potential to win. Fuji’s power sections traditionally favour the high-horsepower FIA GT3 cars, and among them, the #10 TanaX Itochu Enex with Impul GT-R (Kazuki Hoshino/Keishi Ishikawa) and the #56 Realize Nissan Gakuen GT-R (Kiyoto Fujinami/João Paulo de Oliveira) have been tipped as favourites to win because of that.

Other candidates out of the GT3 pack include the #88 JLOC Lamborghini Huracán GT3 (Takashi Kogure/Yuya Motojima) which scored its first points finish at Motegi three weeks ago. The Balance of Performance on the GT3 side of things remains the same as it was when the series last visited Fuji in August.

It’s the #31 Toyota GR Sport Prius PHV apr GT (Koki Saga/Yuhki Nakayama) that could be one to watch in the fight for the class victory, with the benefit of its hybrid powertrain. Super GT track announcer Pierre Kitagawa fancies the #6 Advics muta racing Toyota MC86 (Ryohei Sakaguchi/Kazuto Kotaka) as the favourite to win, especially with its Bridgestone tyres being the preferred choice to go a full race distance if needed. 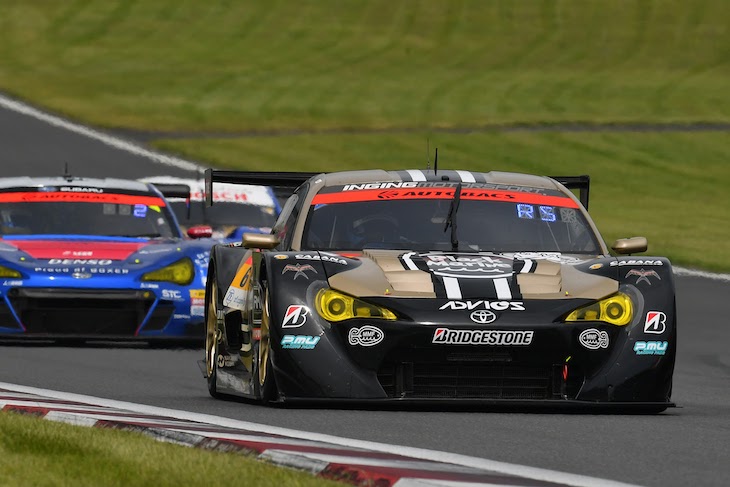 We’re still without many of the foreign GT300 drivers who were meant to be here, but the local talents who’ve been called in to replace them have made a good showing for themselves, Kei Cozzolino, Tsubasa Kondo, and Yuui Tsutsumi among them. This weekend there’s a few more driver changes: 2005 GT300 Champion Kota Sasaki joins Shaun Thong in the #33 EVA RT X Works Audi R8 LMS, with Sasaki returning to the series after a two-year absence. Kizuku Hirota, a winner in the All-Japan F3 National Class, makes his debut in the #50 Arnage Racing AMG GT3, replacing Ryosei Yamashita, who’s taken a hiatus from racing to focus on his family’s business. Gentleman driver Atsushi Tanaka is in for his second start of the year in the #360 RunUp Rivaux GT-R, alongside Takayuki Aoki, the pole sitter at Motegi.