Qualifying for the fifth round of the 2020 Autobacs Super GT Series at Fuji Speedway took place on Saturday afternoon, in front of a crowd of approximately 5,000 spectators, making this the first competitive session of the season to be held with fans in attendance.

They hadn’t been in this place before when the series last visited Fuji Speedway on 8-9 August, but much like Dave Rodgers’ hit eurobeat single, the results of qualifying were a case of déjà vu from the second round of the 2020 season. The #8 ARTA Honda NSX-GT of Tomoki Nojiri and Nirei Fukuzumi will start on pole position for the second time this year, just as they did in Round 2 at Fuji in August.

In the morning’s Practice session, the #12 Calsonic Impul GT-R of Daiki Sasaki and Kazuki Hiramine set the fastest time. GT500 newcomer Hiramine followed up on Team Impul’s pace by setting the fastest time in Q1, one of eight cars that made it into Q2. He finished ahead of Nojiri in the ARTA NSX in 2nd and rookie Ritomo Miyata in the #19 WedsSport Advan Toyota GR Supra in 3rd.

As the second half of the 2020 Super GT season is now underway, Success Ballast is at its harshest during these next two rounds. As a consequence, every team in the top six of the GT500 Championship standings failed to advance into Q2, including the championship-leading #17 Keihin NSX-GT (Koudai Tsukakoshi/Bertrand Baguette) – the car that won here in August – starting 15th and last tomorrow.

The #38 ZENT GR Supra (Yuji Tachikawa/Hiroaki Ishiura) missed the cut line and will start 9th, the #36 au TOM’s GR Supra (Yuhi Sekiguchi/Sacha Fenestraz) qualified 10th, ahead of their teammates, the #37 KeePer TOM’s GR Supra (Ryo Hirakawa/Nick Cassidy) in 11th, then the #14 Wako’s 4CR GR Supra (Kazuya Oshima/Sho Tsuboi) in 12th, and the #100 Raybrig NSX-GT (Naoki Yamamoto/Tadasuke Makino) in 13th. The common theme among these cars is that they were all running fuel flow restrictors below the standard 95 kilogrammes per hour rate, as part of their Success Ballast.

Q2, therefore, was a chance for the teams who have mostly struggled in the first half of the year to regain momentum. Some of the teams on Yokohama tyres seized the initiative early on. With less than two minutes left in the session, Jann Mardenborough in the #24 Realize Corporation Advan GT-R jumped to provisional pole position, before being displaced by the #19 WedsSport GR Supra of Yuji Kunimoto. With less than a minute left, Bridgestone took back pole position as Sasaki grabbed the wheel of the #12 Calsonic GT-R, and took provisional pole on a 1’27.649 as his car sparked along the ground.

Then, just as the chequered flag fell for qualifying, Fukuzumi in the ARTA NSX strung together a mighty second sector time. He improved even further in his third sector, and Fukuzumi set a time of 1’27.130 to seal pole position for Autobacs Racing Team Aguri and Honda. 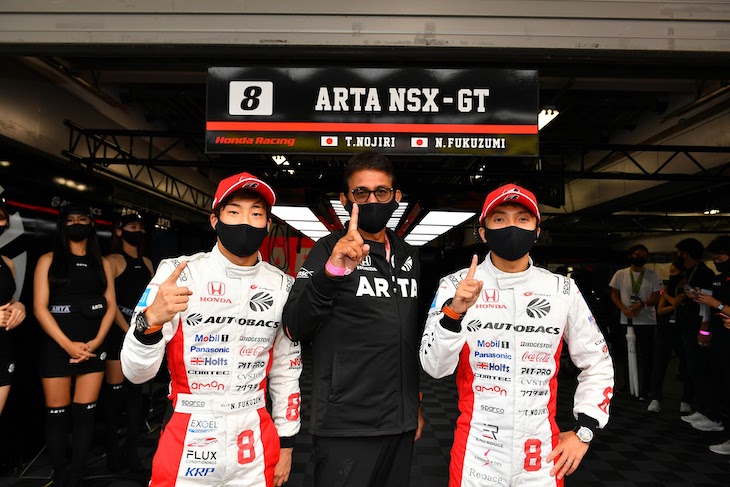 What was the key to Fukuzumi’s success in qualifying? “I ran safely,” he laughed, “but in an attack lap that I felt confident could win pole position, I was able to get this good time and I am very happy about it,” Fukuzumi said in the post-qualifying press conference. “We have had a hard time in the last few races, so for this round the team really came together to set up the car well, and that I believe is why we got this result. In tomorrow’s race as well, I want us to work together to finish as number one.”

Fukuzumi also was given the chance to reflect on Friday’s bombshell announcement that Honda would withdraw from the Formula 1 World Championship at the end of 2021 – he was one of a handful of talented Honda juniors that once chased that goal. “I feel sad and frustrated about the end of Honda’s F1 involvement, especially when I think about the young drivers who are now competing overseas,” he said.

ARTA took pole position for Round 2 at Fuji and were in contention to win the race until an uncharacteristic spin from Nojiri dropped them out of contention. For them, this is a must-win race if they’re to have any chance at a second-half championship attack. 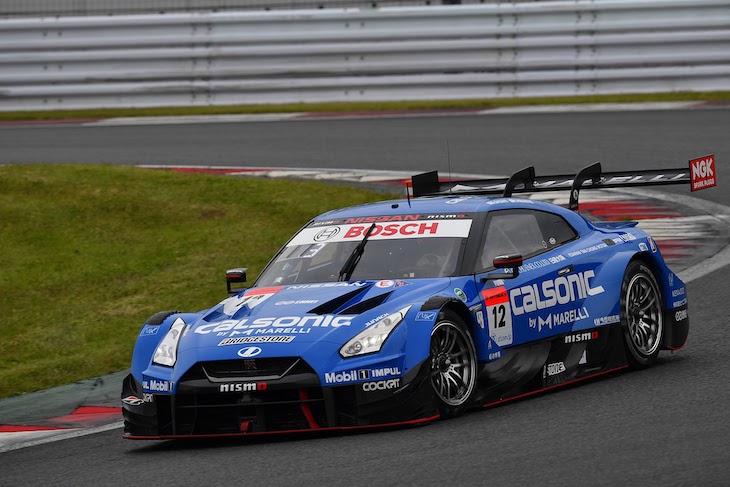 Same for the #12 Calsonic GT-R of Sasaki and Hiramine, who haven’t scored a point so far this season, but will line up second on an all-Bridgestone front row, their first front-row start of the season. They were provisionally sixth in the Fuji round in August, before a 40 second time penalty for causing a collision with a GT300 car in the final lap of the race dropped them out of the points. Team Impul have not won a race since August 2016 at Fuji Speedway. 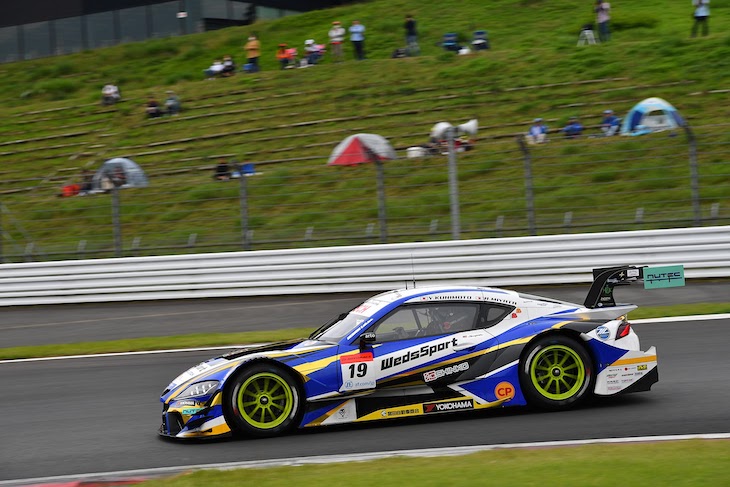 Best of the Toyotas on the Toyota-owned Fuji Speedway is the #19 WedsSport GR Supra of Kunimoto and Miyata, who qualified in third position and will start on the second row alongside their fellow Yokohama runners, the #24 Realize GT-R of Mardenborough and Mitsunori Takaboshi, in fourth. They will be the teams looking to end a lengthy GT500 winless drought for Yokohama Rubber, who haven’t won since Kondo Racing’s #24 GT-R won at Twin Ring Motegi in November 2016.

Of note, none of the top four qualifiers are carrying more than 8kg of Success Ballast.

Rounding out the top eight qualifiers in GT500, the #39 Denso Kobelco SARD GR Supra (Heikki Kovalainen/Yuichi Nakayama) was fifth, the #23 Motul Autech GT-R (Tsugio Matsuda/Ronnie Quintarelli) that won Round 3 at Suzuka was sixth, their sister car, the #3 CraftSports Motul GT-R (Kohei Hirate/Katsumasa Chiyo) was seventh, and coming off their first podium of the season, the #16 Red Bull Motul Mugen NSX-GT (Hideki Mutoh/Ukyo Sasahara) was eighth. 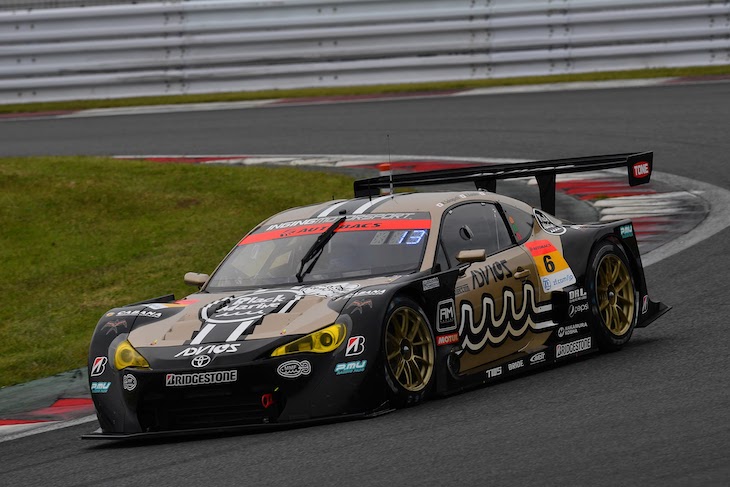 In the GT300 class, Kazuto Kotaka took his second career pole position aboard the #6 Advics muta Toyota MC86, and his second of the year at Fuji Speedway, where he and co-driver Ryohei Sakaguchi had also previously started on the pole in the August round at Fuji.

This weekend the field of GT300 cars was down to 29. R’Qs Motor Sports withdrew their #22 Mercedes-AMG GT3 from this race after damage sustained in a bizarre safety car collision at Motegi three weeks ago, proved too much to fix in time.

In the two groups in Q1, the #31 Toyota GR Sport Prius PHV apr GT of Yuhki Nakayama led Group A. Rookie Toshiki Oyu, who’s come under fire after a messy first-turn incident in the most recent Super Formula race a week ago, definitely needed a strong result – and he did that by leading Group B in his #55 ARTA Honda NSX GT3.

Only two of the top ten teams in the GT300 championship failed to advance out of their Q1 groups, the #10 TanaX Itochu Enex with Impul Nissan GT-R (Kazuki Hoshino/Keishi Ishikawa) will start 17th, and the #18 UPGarage NSX GT3 (Takashi Kobayashi/Kosuke Matsuura) will start 18th.

There was also a late driver change in the #9 NAC Pacific-D’station Aston Martin Vantage GT3, as young Takuro Shinohara was tapped to drive in place of Kei Cozzolino, who hasn’t cleared his mandatory 14-day quarantine after returning from Le Mans. The #9 D’station Vantage will start 25th after Tomonobu Fujii struggled in his Q1 attack.

16 cars progressed into Q2, but 21-year-old Toyota prodigy Kotaka was the sensation in the final laps. With less than two minutes to go, he put down a lap of 1’37.131 to take provisional pole by nearly seven-tenths. He was assured his second career pole position when the chequered flag fell, but Kotaka improved to a final time of 1’37.090. 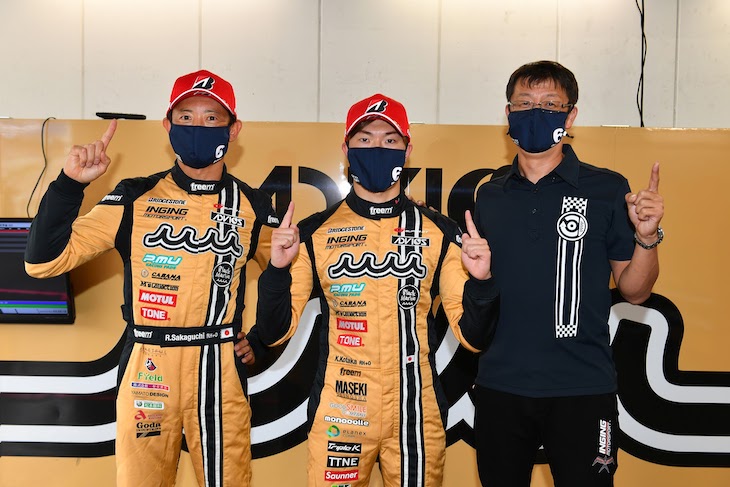 “The machine was fantastic,” remarked Kotaka. “I want to thank the engineers who worked hard to set up the machine so well and also my co-driver Ryohei-san. To tell the truth, I thought we could probably get an even faster time, but in the end, I made a mistake. We have had difficult races in our last few rounds, so, tomorrow I want us to get revenge with a good performance.”

With the Bridgestone-clad Advics MC86 starting on GT300 pole position, Bridgestone tyres maintain a perfect record of winning pole position in both classes at all three rounds held at Fuji thus far. And just like the August round at Fuji, it’s an all-Bridgestone front row in both categories. 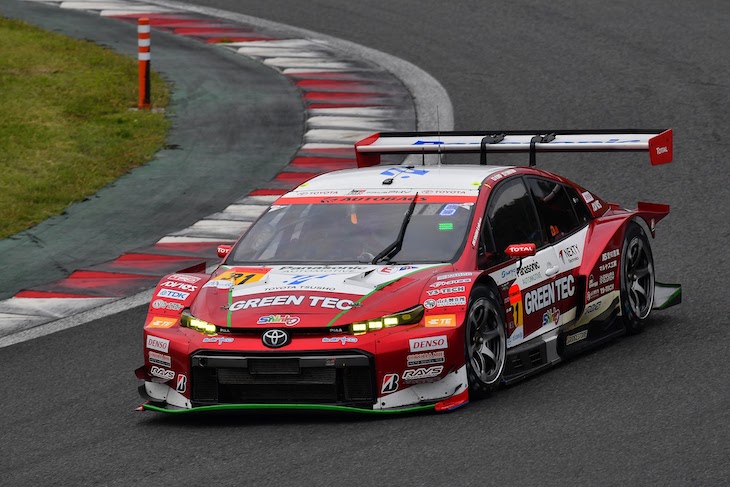 Koki Saga in the #31 Toyota Prius was able to close the gap down to four-tenths in Q2, and he and co-driver Yuhki Nakayama will start on the front row for the second time in three races. This will be a great chance for the front-engined Prius to take its first Super GT victory. 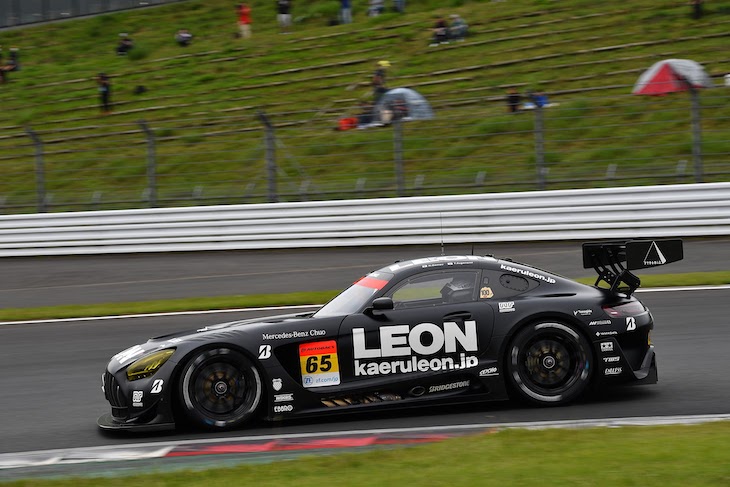 Remarkably, the two cars on the second row of the GT300 grid are both on the maximum 100kg of Success Ballast this weekend: The #65 LEON Pyramid Mercedes-AMG GT3 (Naoya Gamou/Togo Suganami), the winning car at Motegi three weeks ago, qualified in 3rd. The #61 Subaru BRZ R&D Sport (Takuto Iguchi/Hideki Yamauchi) will line up alongside them in fourth.

After Oyu led his Q1 group, Shinichi Takagi couldn’t get a clean lap in the #55 ARTA NSX GT3 and will start 11th. Championship leaders Katsuyuki Hiranaka and Hironobu Yasuda will start 14th in the #11 Gainer TanaX GT-R, the third car running on maximum Success Ballast this weekend. Hiranaka had his fastest time of Q2 deleted for a track limits infringement, but still managed a second-best time good enough to avoid finishing last in the session.