BMW scored a dominant one-two finish in the inaugural Indianapolis 8 Hour from the pair of Walkenhorst Motorsport M6 GT3s with the team’s #34 M6 GT3 piloted by Nicky Catsburg, Connor De Phillippi and Augusto Farfus taking the win ahead of the sister #35 of David Pittard, Martin Tomczyk and Nick Yelloly.

The BMWs took control early on in the race amidst an incident-strewn first couple of hours due to heavy rain, which brought out the Safety Car more than once. 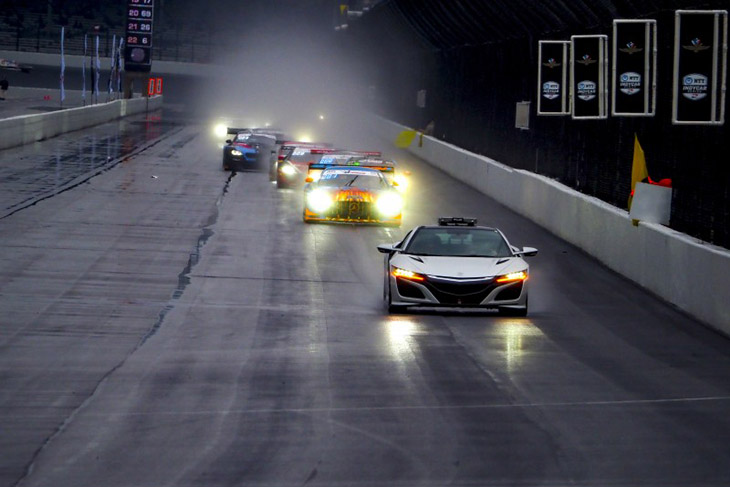 Both BMWs were among the first to respond to the rain, that started to fall heavily as the field took the green flag, to stop for wet-weather tyres, dropping them initially a lap down behind the leading JAS-run Honda and K-Pax Bentley.

Over the following hour the lead changed hands several times, with the #1 Squadra Corse Ferrari, #30 Team Honda Racing Acura and #75 SunEnergy 1 Racing Mercedes-AMG all enjoying turns at the head of the order as the field went through several changes of heart on tyre strategy with some trams taking every caution-period led opportunity to top up fuel. 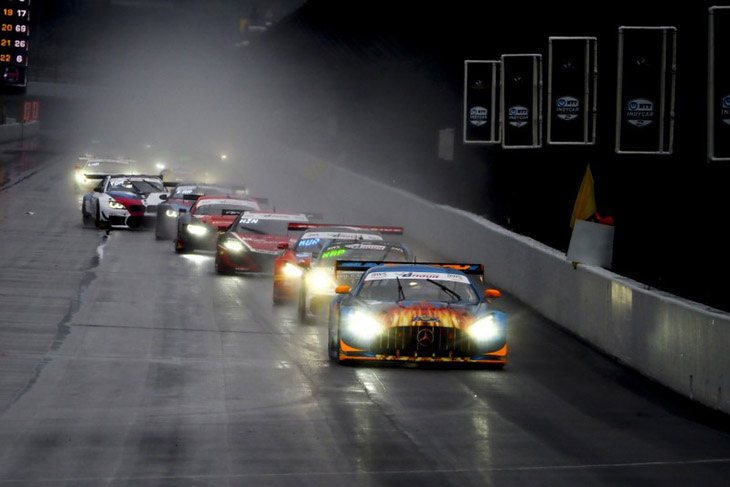 That saw Pepper in the Bentley hit the front once again at around the two-hour mark, pulling clear of Farfus and Yelloly in the chasing BMWs. But the Bentley charge ended when Pepper was tagged by a GT4 runner, causing substantial damage to the right rear corner of the Continental GT3. He was initially able to continue, only for a suspension failure to pitch the car into a spin, the car spending a significant period in the garage before coming back out in a push for points. 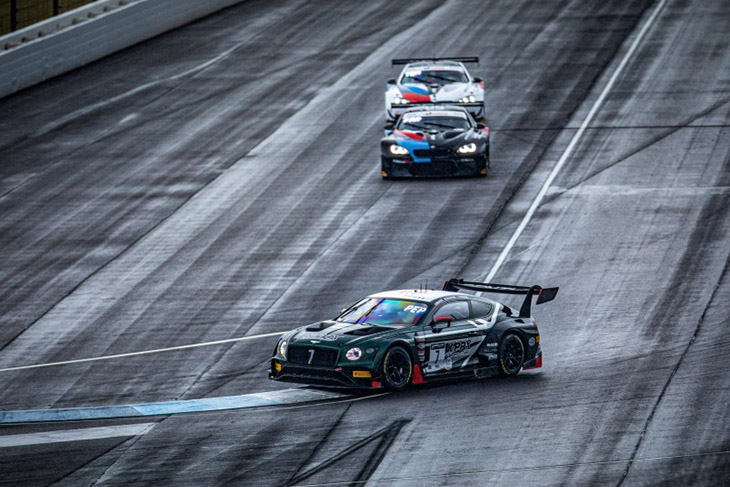 With the Bentley out of the running the BMWs were back in control, the leading M6 GT3s though went wheel-to-wheel on a number of occasions, with Yelloly in particularly combative mood as he shot past De Phillippi shortly before the three-hour mark.

It remained this way for almost an hour before De Phillippi restored his crew’s advantage by passing Pittard.

The only serious challenge to the Walkenhorst cars came from the factory Acura. Though clearly among the quickest cars on-track, the #30 NSX GT3 was pegged back by a number of issues during the opening stages after the car had led the race early on. 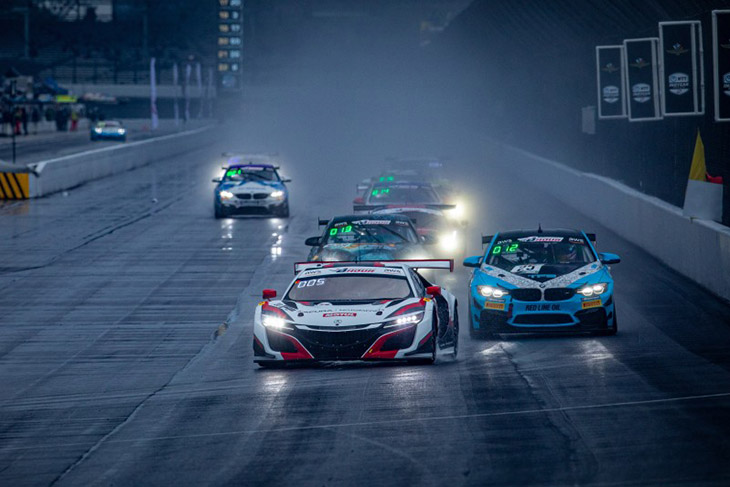 The squad finally caught a break during the sixth hour when a safety car period allowed Dane Cameron to regain a lost lap, after which the American kept pace with the BMWs and brought the contest to life once more.

This challenge effectively ended though when the #30 car could not pull away from its penultimate stop, while the BMWs simultaneously made routine visits to pit road. The extended delay cost the factory NSX a lap and put paid to its Indy ambitions with two hours remaining.

With their only major rival falling by the wayside the final quarter of the race was comfortable for the Walkenhorst BMWs. Catsburg took the wheel of the leading car and settled into a metronomic rhythm, pulling more than half a minute clear by the chequered flag. With the #35 following him home in the hands of Yelloly, BMW scored the IGTC’s first one-two finish since Audi dominated at Laguna Seca in 2018. 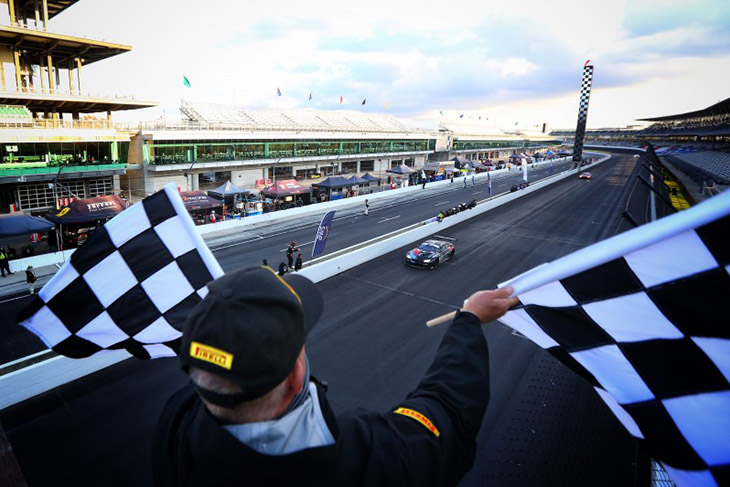 The #04 DXDT Racing Mercedes-AMG was sixth and first among the Pro-Am runners thanks to an accomplished run from George Kurtz, Ben Keating and Colin Braun. The #20 Wright Motorsports Porsche was next, followed by the #93 Racers Edge Motorsport NSX, #1 Squadra Corse Ferrari and #75 Sun Energy 1 Mercedes-AMG. 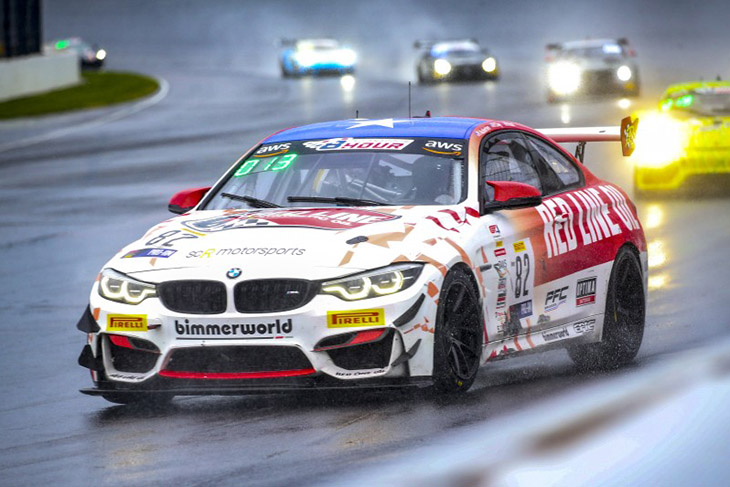 The overall top-10 was completed by the GT4 class winner. This ended with another BMW one-two as the #82 Bimmerworld machine of Bill Auberlen, Chandler Hull and James Clay led home the #438 ST Racing crew. The winning squad started the race from ninth among the GT4 runners but prevailed in a race that saw several strong contenders for victory. The GMG Racing Porsche finished third after a back-and-forth battle with the ST BMW during the closing stages.

Further back, the #7 Bentley recovered to 17th overall and 10th among the GT3 entrants. This ensured that the trio of Pepper, Jules Gounon and Maxime Soulet scored a single point and therefore maintain their championship advantage following victory in February’s Liqui-Moly Bathurst 12 Hour. They hold the slenderest of leads, with the #34 Walkenhorst BMW crew just one point in arrears and several others within striking distance.

Indeed, the battle for the Drivers’ and Manufacturers’ titles are wide open ahead of the blue riband Total 24 Hours of Spa.