Lamborghinis finished one-two overall thanks to WPI Motorsport, Michael Igoe and Andrea Caldarelli who were joined on the podium by championship leaders Patrick Kujala and Sam De Haan. The RAM Racing duo lead closest rivals Rob Collard and Sandy Mitchell by six points after a seatbelt issue during the pitstops cost Barwell’s Black Bull-backed Huracan 20 seconds and a probable podium.

Further back, Connor O’Brien and Patrick Kibble also remain in GT4 contention after claiming their second third place finish of the day.

Barwell and Lamborghini’s knack of winning at Snetterton continued in today’s second race where Adam Balon and Phil Keen claimed their third win in four attempts.

Sandy Mitchell’s exceptional qualifying lap denied Keen pole. However, the latter was immediately on the front foot at the start and swept around the outside of his team-mate as the pack filed through Riches for the first time.

The Huracan has always performed well in cold, damp conditions and soon both of Barwell’s were away and gone from a pack headed by RAM Racing’s Yelmer Buurman. Andrea Caldarelli (WPI Motorsport) and Patrick Kujala (RAM) continued from where they’d started while Race 1 winner Jack Mitchell (2 Seas Motorsport) moved into sixth ahead of Joe Osborne (Balfe Motorsport). The top-seven would remain unchanged throughout the opening stint. 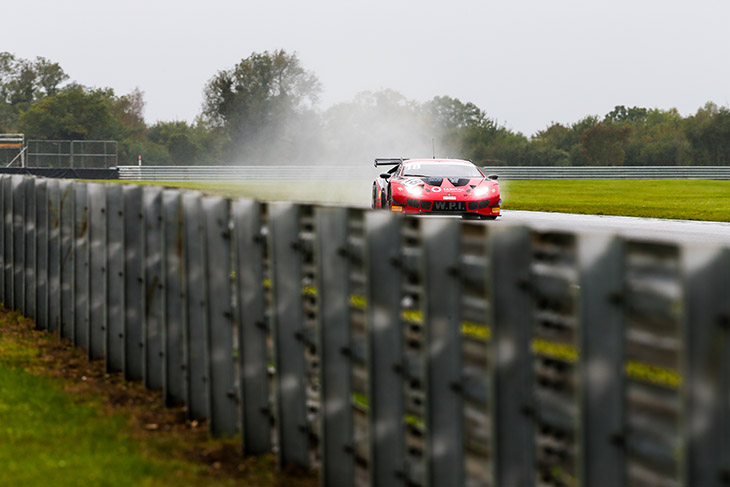 Behind, Ollie Wilkinson was engaged in a thrilling battle for eighth with Angus Fender and, latterly, Michael O’Brien. 2 Seas’ McLaren was repeatedly rebuffed by Optimum’s example before finding a way past, only to lose the place again just before pitting.

By that point Keen had moved eight seconds clear of Mitchell who’d negated his seven-second Success Penalty to Buurman behind. Barwell’s Lamborghinis should, therefore, have resumed one-two after the stops only for a seatbelt issue to cost the #78 Huracan approximately 20 seconds.

The upshot was a 30-second lead for Balon who stroked it home while others battled behind.

RAM’s Ian Loggie, who’d taken over from Buurman, slotted into second but was immediately under pressure from Michael Igoe. The Mercedes-AMG looked to have seen off WPI’s threat before the Lamborghini’s renewed presence and Igoe’s persistence saw Loggie run wide and drop to fourth behind team-mate De Haan.

Loggie’s attention now turned to helping out the sister car’s championship challenge by keeping Rob Collard at bay. The seatbelt issue had cost Barwell’s other Huracan three positions and a potential victory shot, but try as he might there was no way to dislodge the resolute Mercedes-AMG. 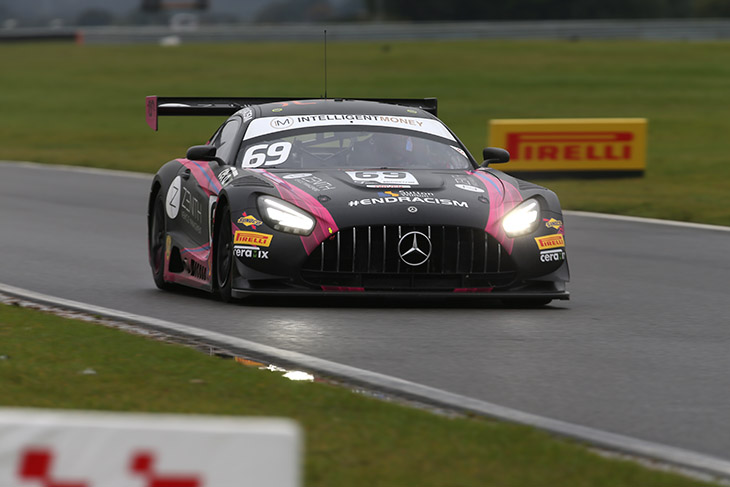 Jenson Team Rocket RJN’s O’Brien and James Baldwin retain a mathematical title shot by completing the top-six after the latter passed Jordan Witt in the second stint. And 2 Seas’ #10 McLaren ultimately dropped to eighth when Optimum’s Lewis Proctor also nipped past on the final lap.

The second 2 Seas 720S and Balfe’s McLaren shared by Osborne and Stewart Proctor rounded out the top-10.

All of that leaves De Haan and Kujala six points clear of Mitchell and Collard with 37.5 to play for at Silverstone’s three-hour season finale on November 7/8. Balon and Keen are a further 5.5 points adrift while Baldwin and O’Brien must win and hope other results go their way to have any chance of overturning a 34-point deficit.

Meanwhile, Balon and Keen lead Pro/Am title rivals Loggie and Buurman by just one point. Igoe is also still in contention, albeit 25.5 points off the lead.

Patrik Matthiesen and Jordan Collard claimed their second victory of the season in Race 2 at Snetterton to set up what promises to be a nail-biting championship decider at Silverstone next month.

While the pace of the #58 HHC McLaren was already evident from Race 1, the full Success Penalty proved the difference between victory and second in the earlier outing. 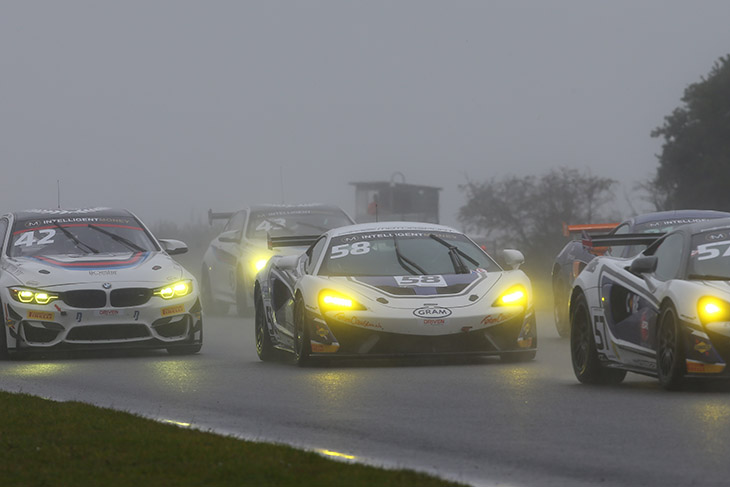 This time the tables were reversed, with Collard putting on a stunning charge during the second half of the race to catch and pass the championship-leading TF Sport Aston Martin of Jamie Caroline and Dan Vaughan and secure the victory.

Initially, things didn’t look good for the McLaren, with Matthiesen getting squeezed back from second on the grid to run fifth at the end of the first lap. In contrast, Race 1 victor Caroline had no issues, using a brilliant launch to bring the #97 Aston up from fifth on the grid to dive inside pole-sitter Matt Cowley’s Mustang at Palmer and lead in the difficult, greasy conditions.

With grip at a premium, the front-engined Astons came into their own, as Patrick Kibble followed the sister car through to second, drafting past Cowley after getting a better exit out of Murrays corner.

Cowley was visibly struggling for grip in the conditions, and gradually dropped places to Euan Hankey’s Pro/Am McLaren and the recovering Matthiesen, who finally got the move done with a brave around-the-outside dive at Coram.

With 10 seconds extra to serve at his pitstop, leader Caroline wasted little time in pressing on, and soon stretched a comfortable advantage over Kibble by the time the pit window opened. 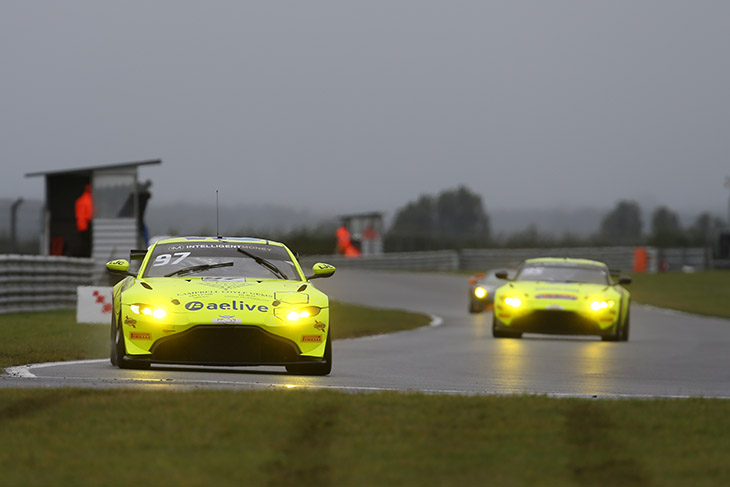 Once again, both TF cars pitted together, as did Hankey from third to hand over to Mia Flewitt. With no Success Penalty or additional Silver Cup handicap, Balfe’s McLaren initially emerged ahead while Caroline’s fine early work enabled team-mate Vaughan to get back out in front of the sister car, now driven by Connor O’Brien.

Vaughan latched straight onto the back of Flewitt and regained the lead, but the man on a charge was Collard. Matthiesen had brought the HHC car in from fourth place at the first opportunity, and once installed Collard lit up the timing screens.

Thanks to a rapid out-lap, he was into fourth when the order worked out and then proceeded to drag past O’Brien for third down the pit straight. He then zipped past Flewitt and set his sights on Vaughan. After thinking better of a risky move around the outside at Coram, Collard eventually got a run alongside the Aston out of Murrays and the race was done.

Vaughan took second to hold the championship lead, albeit now by a reduced margin of just 2.5 points heading to the final round. O’Brien made it two TF Astons on the podium after working his way past Flewitt, who still took the Pro/Am victory in a fine fourth.

Andrew Gordon-Colebrooke was fifth after taking over from Ben Tuck in the lead Century Motorsport BMW M4, as Will Moore capped a tough weekend for Academy Motorsport with sixth.

James Kell and Sam Smelt were seventh in the Speedworks Toyota, ahead of Ben Hurst and Adam Hatfield’s BMW.

The second HHC McLaren of Gus Bowers and Chris Wesemael endured a tough race after the latter tangled with Team Parker Racing’s Bentley at Brundle on the first lap. The resulting repairs left it eighth at the flag.

The updated championship situation sees Caroline/Vaughan 2.5 points clear of Collard/Matthiesen while Kibble/O’Brien will start the final weekend 13 points behind their team-mates. Cowley and Bowers/Wesemael also retain slim chances of being crowned 2020 GT4 champions.