In the first of two articles, Tim Dunlop takes a look around last month’s Concours of Elegance held at Hampton Court Palace.

Having attended this event last year I knew that walking through the East Front gates of Hampton Court and into the resplendent gardens would leave me with an issue, do I look left or right first?

Well, this year the decision was quite easy given the display directly in front of me.

The organisers had entitled the group of cars ‘Ford vs Ferrari’, 5 glorious historically significant automobiles from the stables of two prideful men involved in one of the greatest rivalries in motor sport. While this rivalry has been well documented in many documentaries, books, and even big-budget Hollywood feature films this display was quite simple in its execution, and to be honest it didn’t need to be any more complicated. 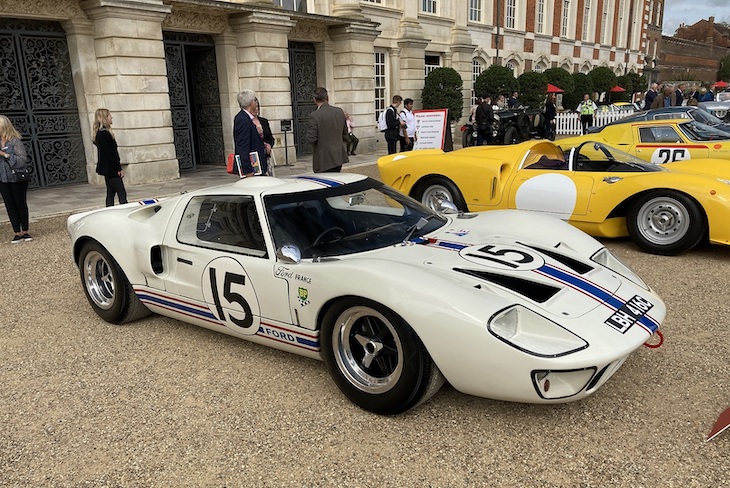 The first car in this selection was a Ford GT40. Chassis 1007 was one of ten cars built during the 1965 season, it was the second car allocated to Ford of France and was finished in their livery of white with a blue centre stripe and red pinstripes. Following its display at the Monza Racing Car Show and an appearance in the highly-rated Claude Le Louch film ‘Un Homme et Une Femme’, 1007 began its racing career in May 1966 at the Le Mans 24 Hours. 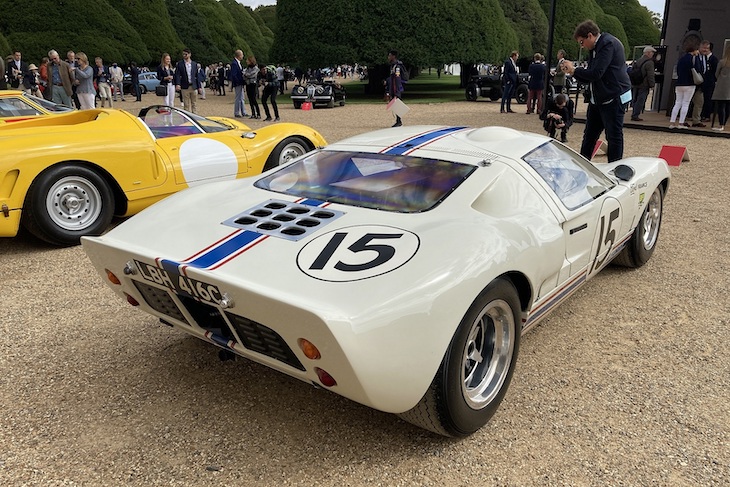 Although retired from the big race after 15 hours was perhaps not the start the team wanted, a sixth-place finish at the Monza 1000km and a class win at the Targa Florio began to make up for the disappointment at La Sarthe. An accident in late 1966 while competing saw the car sent back to Ford Advanced Vehicles for a new engine and lighter bodywork before the car returned to competition in 1967 for three rounds of the Worlds Sportscar Championship. 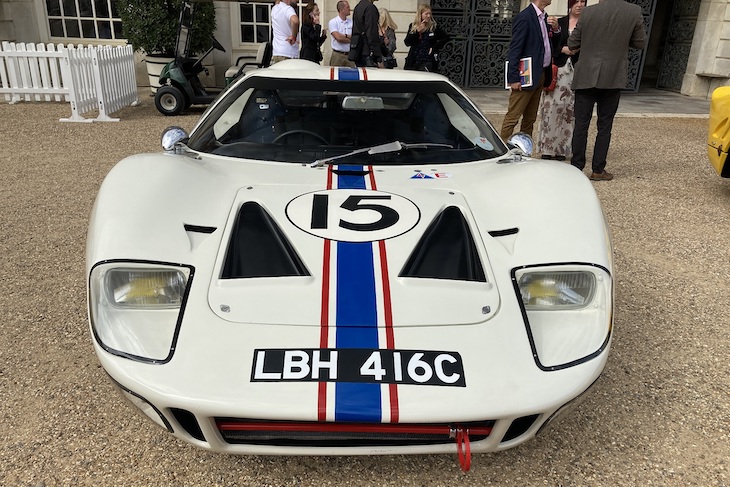 The car would only compete once more at the ‘67 Nurburgring 1000km although in latter years it has been entered in many historic competitions, including the French Tour Auto and Coupes de Printemps. 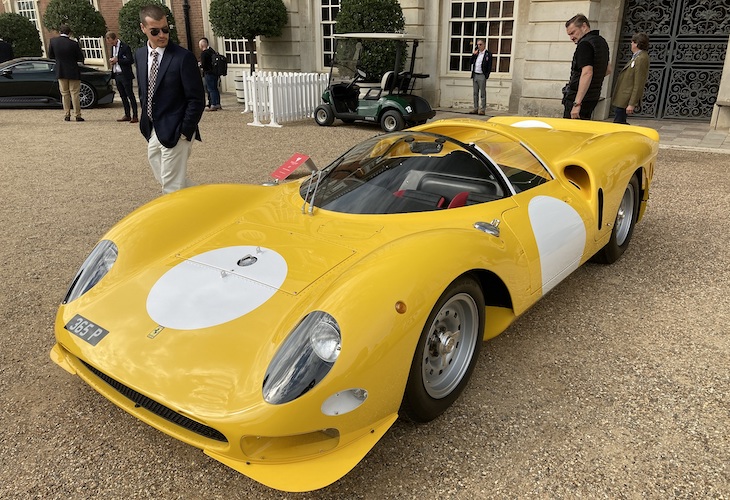 Next to the Ford stood two Ferrari race cars. Unusual in their un-Ferrari Yellow paint the first car was not one I was instantly familiar with, my knowledge of early prototype racing cars being a little sketchy. A little more research showed this car to be a 365P, although that’s not how it started its life.

Chassis 0828 emerged from Scuderia Ferrari in Italy as a 275P around the same time as the GT40 next to it had left Ford in Slough. Hot on the heels of the Le Mans winning 250P which took victory in 1963, the 275P saw a larger displacement engine and slightly modified bodywork. This car would first see track action at Le Mans test day in April 65 where it would be piloted by John Surtees who gelled with the car almost from the off taking the car to a second-place at the Monza 1000km only a few weeks later.

May saw the car takes its first victory at the Targa Florio before the car evolved with an uprated 4.4-litre engine to be given the 365P nomenclature it wore as the car again piloted by Surtees won the Nurburgring 1000km. 1966 saw the car’s ownership move to Ecurie Francorchamps who entered the car in the Monza 1000km (retired with a dynamo fault), the 1000km de Francorchamps (DNF due to a water leak) and the 1966 Le Mans 24 Hours where the car retired with engine issues after 14 hours. 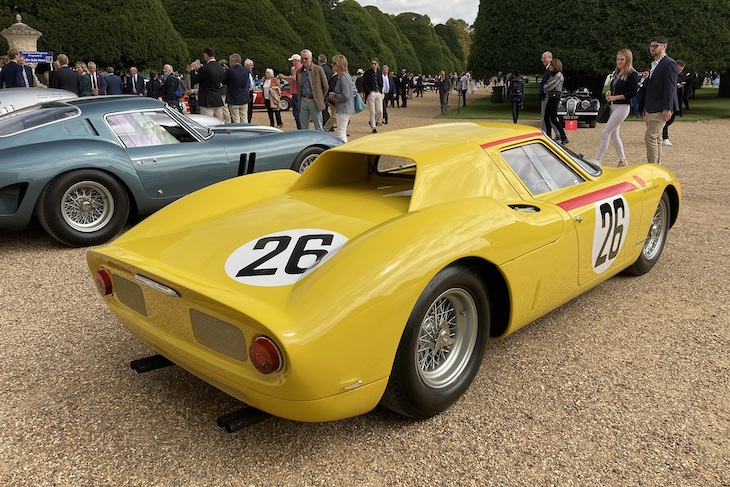 The second yellow car was instantly recognisable. The 250LM is one of the iconic Ferrari racers, and although to me perhaps not as pretty as the GTO, still a great looking car. Taking the same chassis and running gear as the Le Mans winning 250P the LM was the Berlinetta version and although it was at first refused homologation and forced to race as a prototype, it gained official acceptance in 1966 thanks to the group 4 rules and finally raced as a grand touring car.

Chassis 6313 is the second to last 250LM to be built, supplied new to Ecurie Francorchamps in April 1965 the car saw its first race at Monza (DNF) before being repainted in its current yellow livery and going on to score a second-place (while still classified in the prototype class) in the hands of Pierre Dumay and Gustave Gosselin. 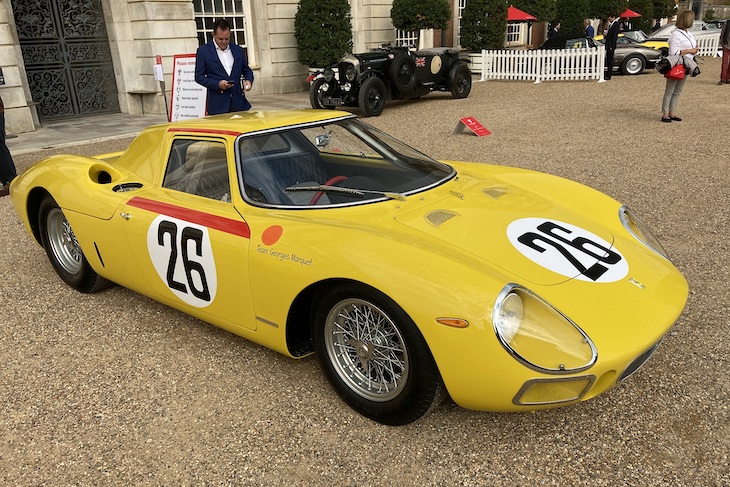 The car actually led for much of the race before a tyre failure in the closing stages saw it caught and passed by the similar car of the eventual winners Gregory, Rindt and Hugus. 6313 has continued to compete over the years across the globe with one of its most recent victories being in the Le Mans Legends race in 2011. 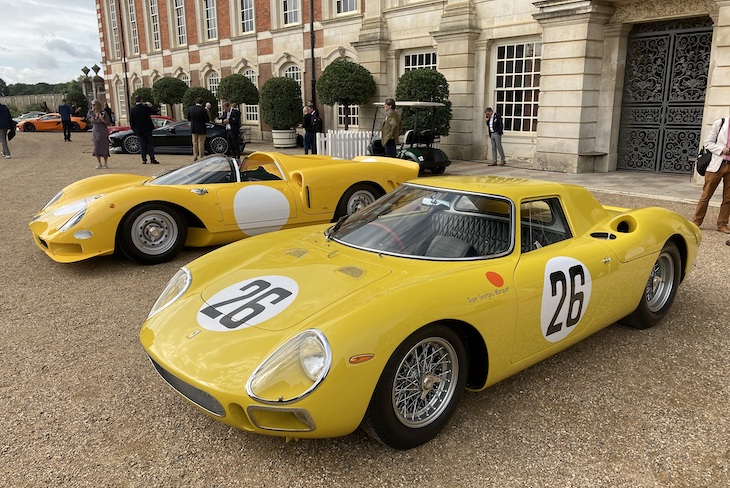 While admiring the GT40 and the two yellow Ferrari’s my eyes could not help but get distracted by the fourth car in the display. I knew full well what it was having seen it on quite a few social media posts over recent weeks as it was driven around the streets of central London by its racing driver owner. Seeing it in the flesh was however quite simply breath taking. Fresh from a three-year restoration the car was not surrounded by protective barriers or security guards which just shows was a great event this is, especially given this car was last advertised for sale in late 2016 at over £45 million. 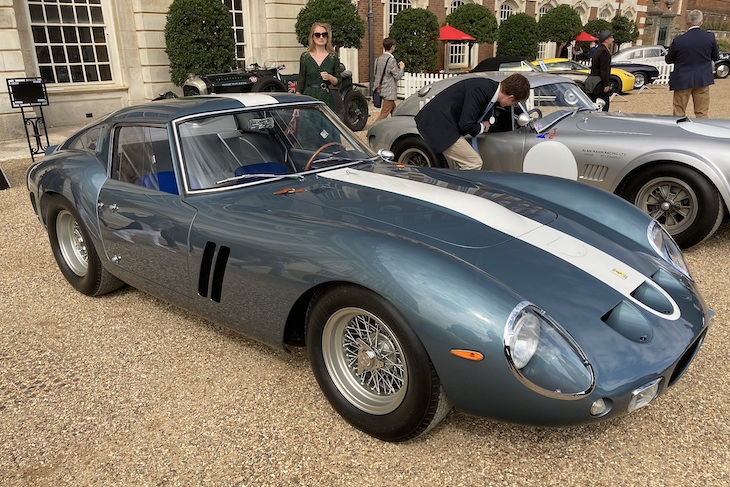 The car drawing my gaze was, of course, a Ferrari 250GTO, and in particular, Chassis 3387GT the second-ever GTO built and Ferrari’s own factory test car. Finished in March 1962 the car (the only one with a pop-riveted rear spoiler) was used for testing at the Monza circuit in order to help Ferrari further develop this model line. 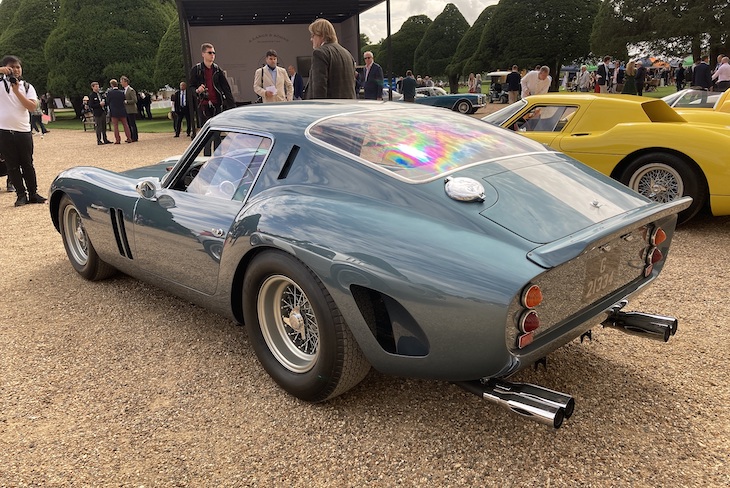 After this it was shipped to the USA where it became part of NART (North American Racing Team) and was actually the first GTO to compete in a race. That race just happened to be the 12 hours of Sebring where the car finished second overall (first in class) driven by Phil Hill and Olivier Gendebien. 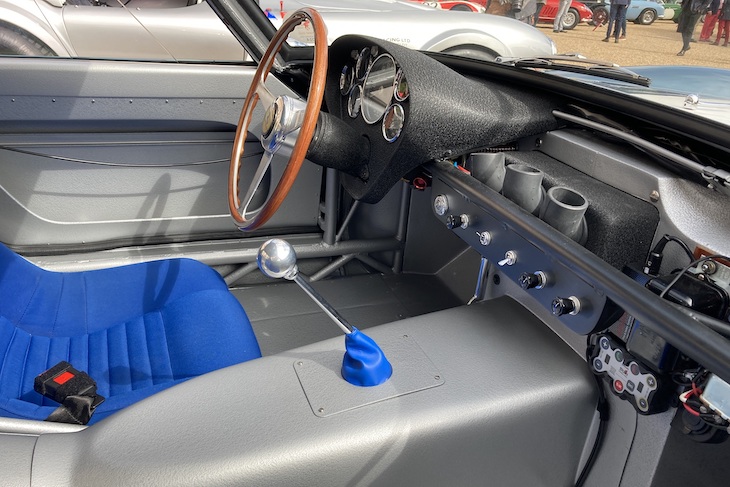 June 1962 saw the car sold to new owner Robert Grossman who decided to enter the car in the Le Mans 24 Hours alongside his co-driver stock car racer Edward Glen ‘Fireball’ Roberts. Grossman and Roberts took the car to an overall 6th place (2nd in class) in a season that saw the car race a further 8 times in North America before another outing at Sebring in 1963. 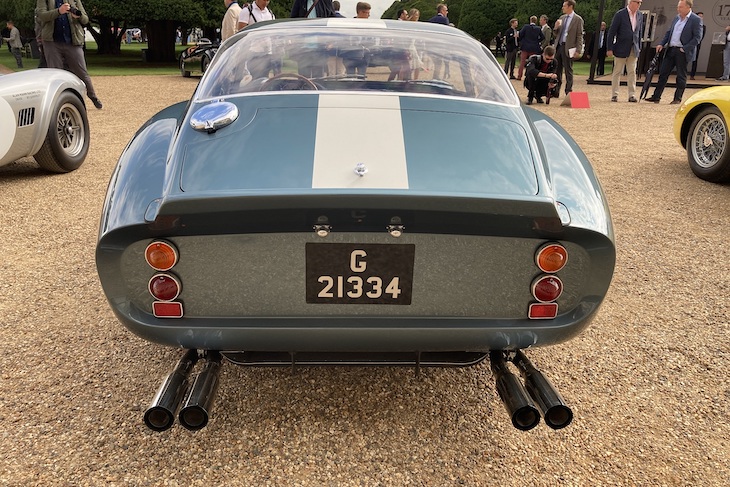 The fifth and final car in the display was an AC Cobra. Who could not recognise this classic shape? perhaps equally as iconic as the Ford GT40 the Cobra forming part of this display was a Silver car with a recognisable name stickered on the side. Reading the accompanying concours programme identifies this car as Chassis COB6041, a 1964 produced 289 engined car with an impressive classic and recent racing history.

Sold new to Patrick McNally who employed the services of Alan Mann Racing to upgrade the car for endurance events, 6041 would compete as part of the Shelby Racing Team in Hillclimb and drag racing events before a change of ownership in 1967 saw the car race at the Nurburgring 1000km (DNF) and again at the same event in 1969 whereas the last Cobra to race in the World Sportscar Championships it was competing against Porsche 917’s. 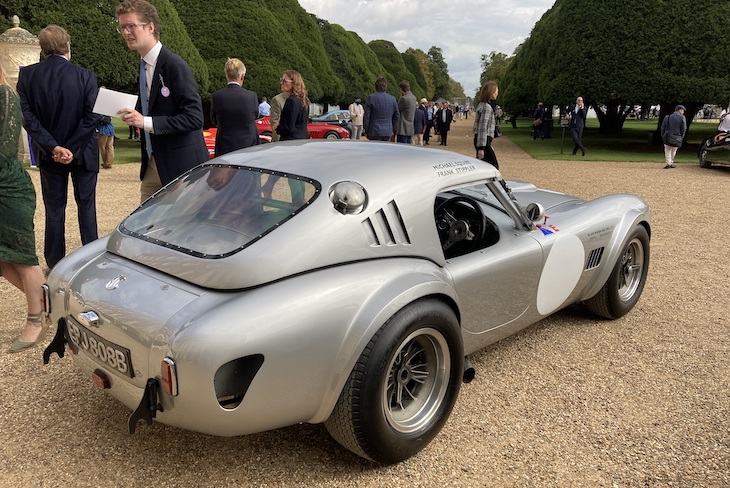 Latterly the car has continued to be raced and enjoyed, notable results were a 3rd place in 2015 and a second place in 2016 at the Goodwood Revival driven by Audi factory GT racer Frank Stippler whose name continues to adorn the car. 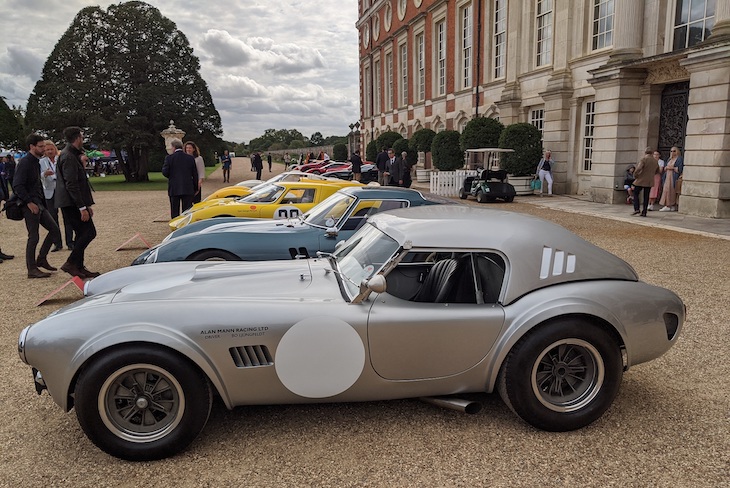 Coming next, I will have a look at some of the hidden gems in the Concours display and also celebrate a significant anniversary of a sportscar great.