Although the Ford vs Ferrari feature took pride of place in front of Hampton Court Palace there were plenty of other cars in the main Concours display for the sportscar enthusiast to satisfy their lust for all thing’s endurance racing.

Across the gravel path from the cars featured in the first part of this article was the instantly recognizable Le Mans 1970 winning Porsche 917K in the iconic red and white Salzburg livery. Car 23 was a huge favourite with the attendees of the event and was awarded the prestigious ‘Best in Show’ as the event drew to a close on the Sunday evening. 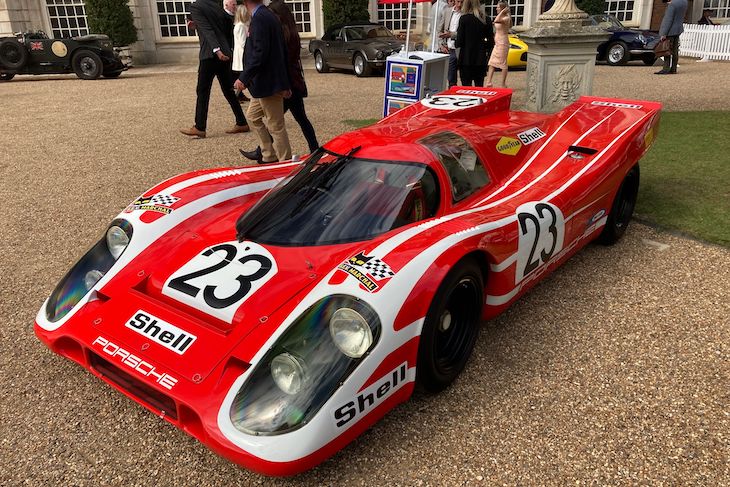 This car driven by Richard Attwood and Hans Herrmann gave the Stuttgart manufacturer the first of its so far 19 wins overall at Le Mans. Having first raced in 1969 the 917 was perfected over this season allowing it to become fully race proven, in the process ironing out with enhancements to its aerodynamics its wayward behaviour at high speed. 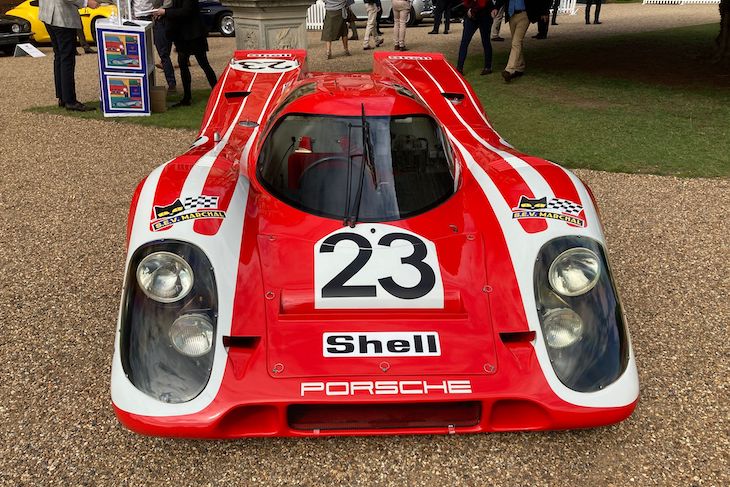 The story of Attwood’s choice to opt for the short tail over the faster 917LH Long Tail is widely known to many who are fans of this great marque. Poor weather into the evening, the milder specification of the car and the experience of the two drivers put #23 in a great position enabling it to win the race with another 917 in second place. What is perhaps not as well known is the fact Attwood competed in the race not knowing he had a case of mumps. 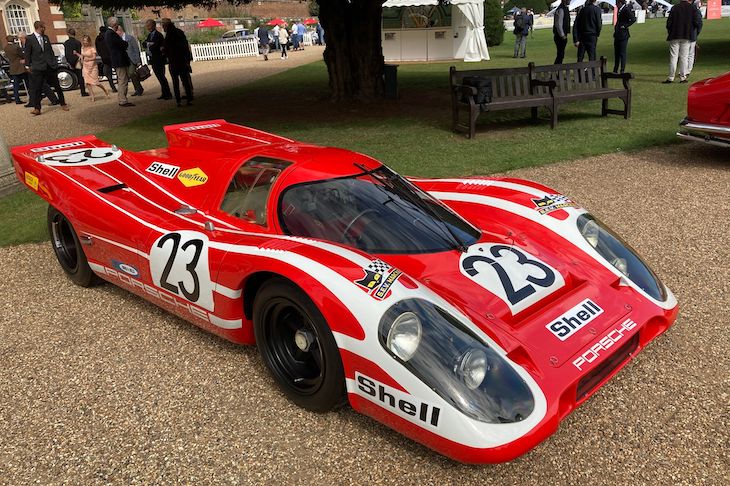 Continuing the Le Mans theme and also carrying on with cars that had bought Porsche victory at the famous French race was a car a little further down the display. 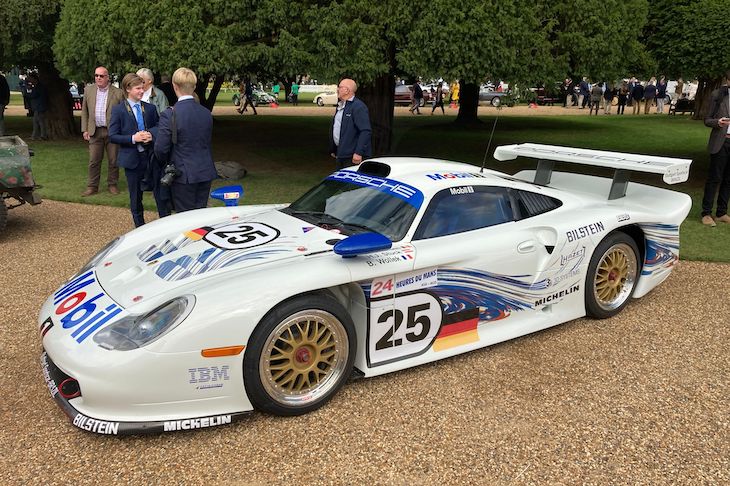 At Le Mans driven by Bob Wollek, Hans Joachim Stuck and Thierry Boutsen the car had a great qualifying session lining up third at the start, however, a gearbox fault during the race saw the car fail to finish with the open-top TWR Porsche taking the honours. 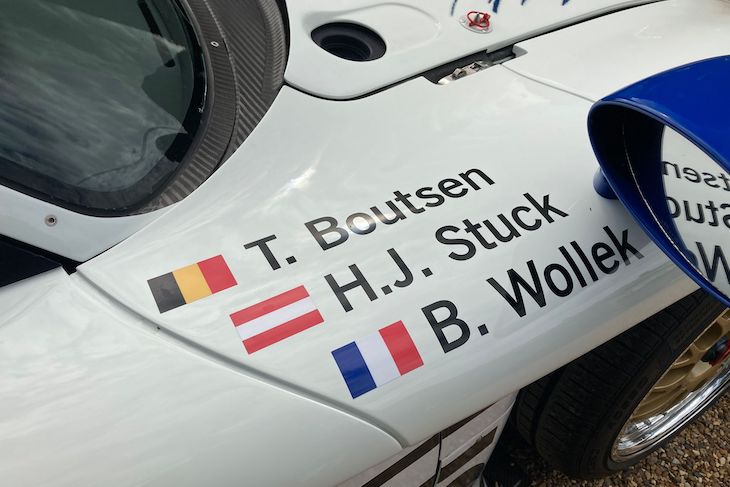 A race later in the year at Laguna Seca would see the car score its best finish (a third place) before it was retired from mainstream global sportscar racing in favour of some time in the Canadian GT championship driven by Klaus Bytzek and finally a spell as the T-car at Daytona in 2001. 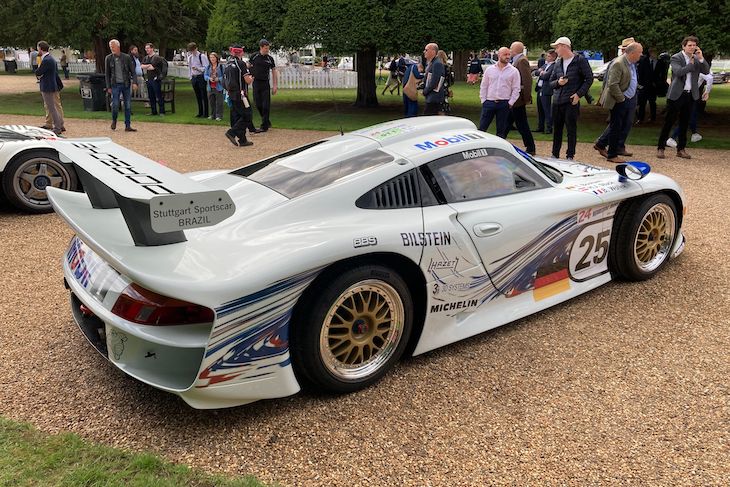 After a change of ownership in 2008 the car was returned to its 1997 Le Mans livery. 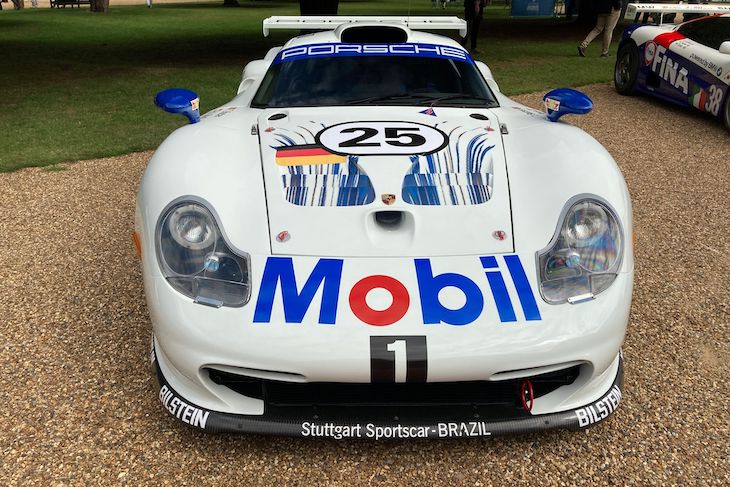 Subsequent sales have seen the car form part of some of the most significant collections in the world before the sale 18 months ago saw it join the RSR collection, it remains one of only two factory GT1’s in private hands. 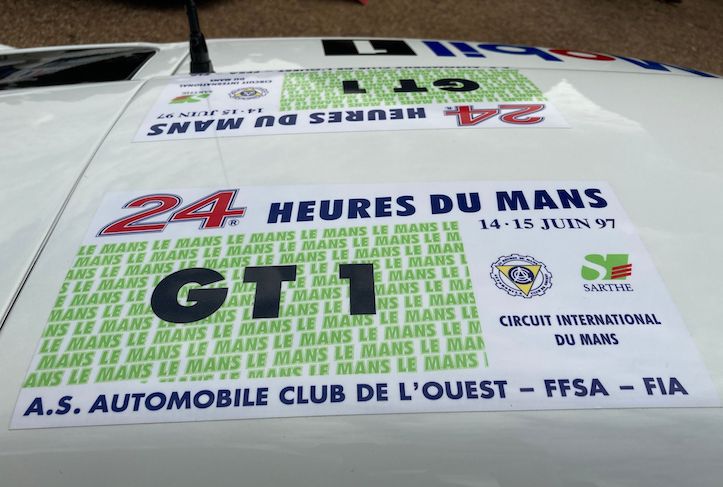 Next to the Porsche GT1 and on the rare chance you could see through the assembled crowds was a pair of McLaren F1 GTR’s, 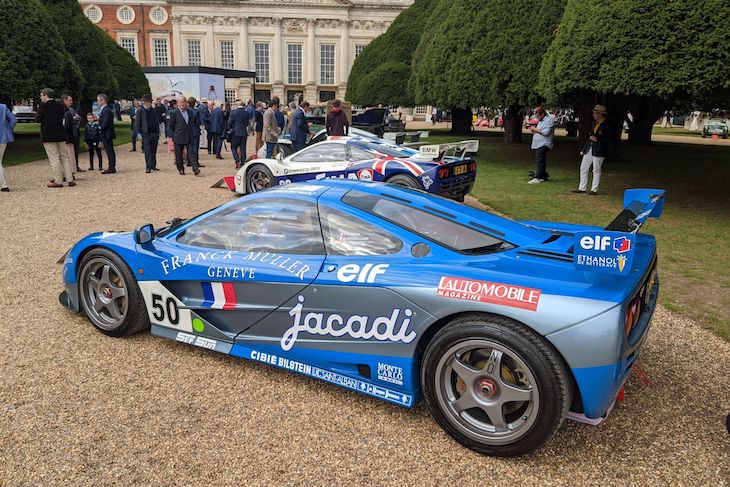 In the months leading up to this event, the organisers had trailed a celebration of 25 years since the F1 took its only overall win at Le Mans, in the various press releases the indication was the display would see all five F1’s from the 1995 race. I guess in the weeks immediately before the event and with the ongoing pandemic showing signs of a second wave across much of Europe, some owners plans were curtailed and we unfortunately only had two cars entered into the Concours event. I say, unfortunately, although I am not sure seeing 2 F1 GTRs can ever be classed as unfortunate however personally the site of all 5 would have been something to remember for many years. 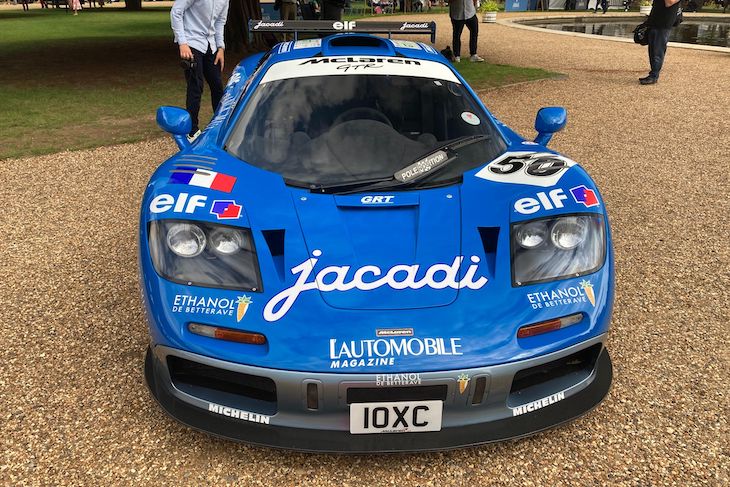 The first of the two cars was chassis 07R, this is the Giroix Racing Team car that finished in 5th place at the 1995 race driven by Fabien Giroix, Jean-Denis Délétraz, and Olivier Grouillard. 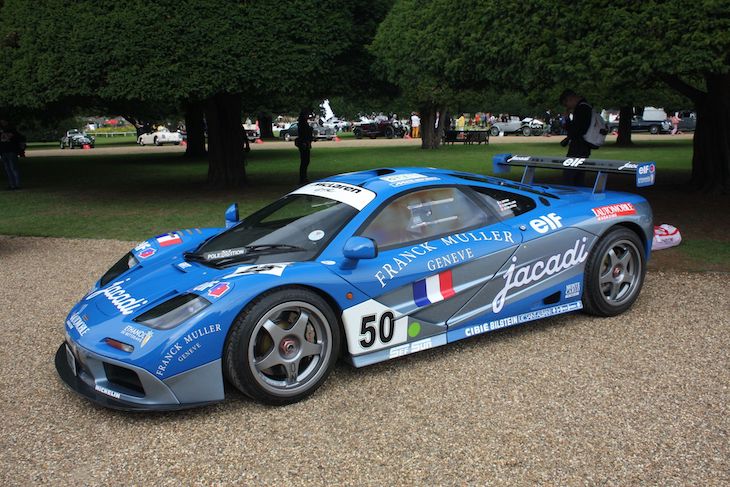 Beautifully restored back to its original 1995 livery it has like many other F1 GTR’s spent some time since its racing career ended painted in the iconic Papaya Orange, and thanks to a few modifications including a set of number plates has been used by the owners not on track but on their daily commute. 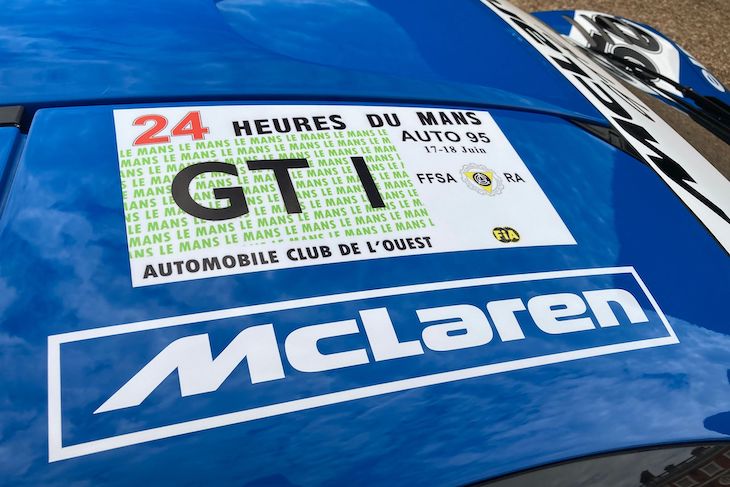 This particular car was driven to/from the event across London much to the delight of many people of social media who did a double take as they sat next to it in traffic. 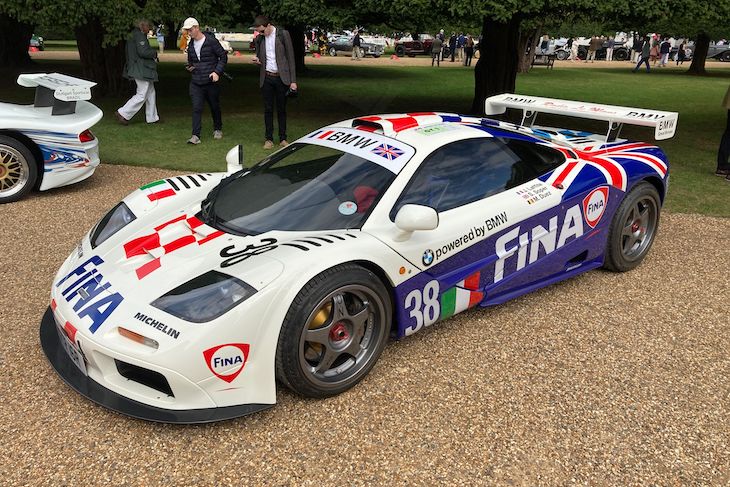 The second F1 GTR was actually not a car from that famous race in 1995 but from the following year’s race where it formed part of the three-car BMW Motorsport team. 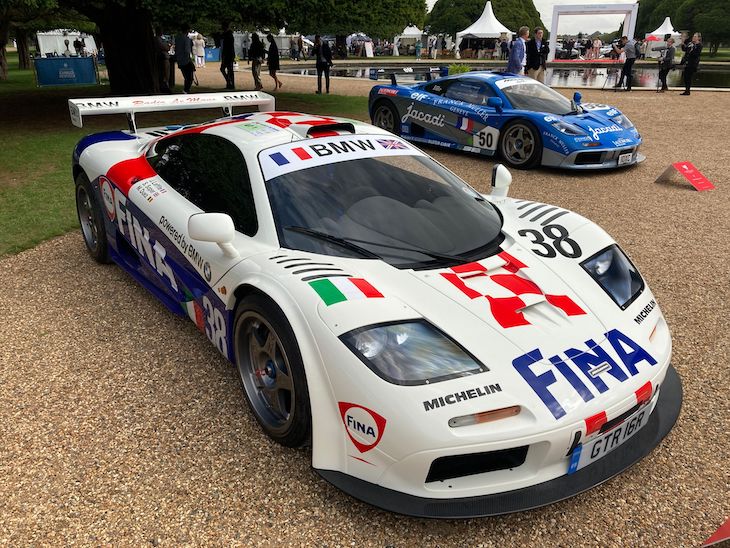 Chassis 16R was a new car for 1996 and one of the later of the nine GTR’s built for the 96 season, it actually only raced on a couple of occasions (Le Mans Pre Qualifying, Silverstone 4 hours and the main Le Mans race itself) before being sold by BMW. 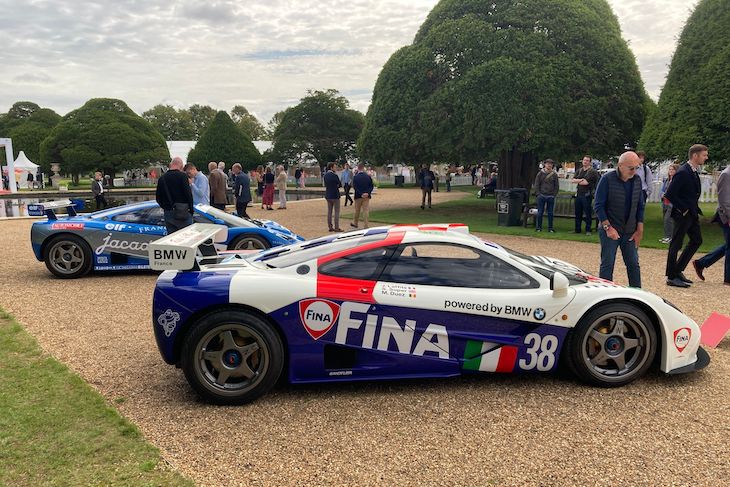 At Le Mans driven by Steve Soper, Jacques Latiffe and Marc Duez the car finished in 11th, a gearbox issue putting pay to what surely would have been a higher placed finish. 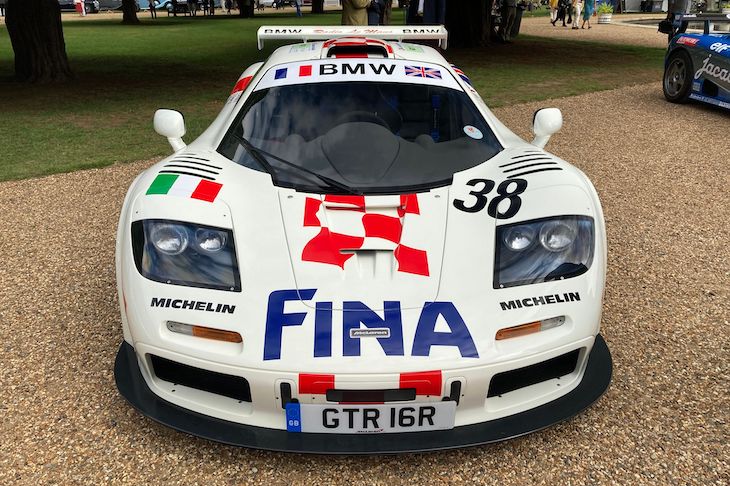 As with 07R that was lined up next to it at Hampton Court, this car had also spent time in Papaya Orange (a scheme chosen by many owners to make their cars appear much like the fabled and extremely rare F1 LM) before being returned to the famous ‘FINA’ livery it ran in at Le Mans. 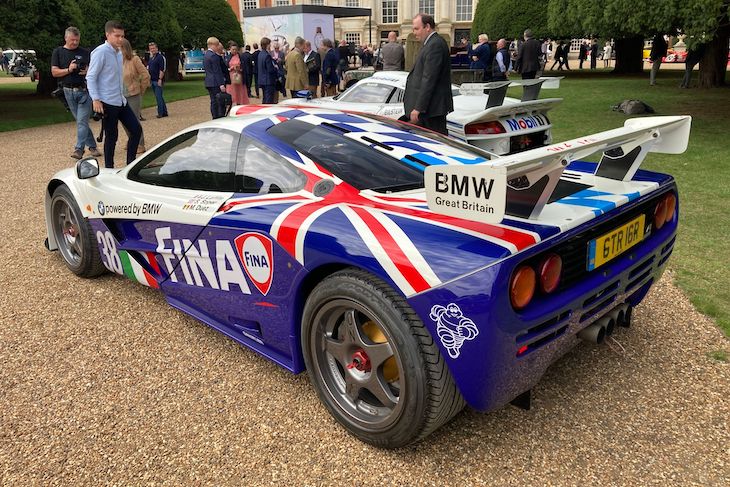 Stepping back quite some time a superb entrant to the Concours came in the form of a classic British sports car that had competed at Sebring in period. MG was at the forefront of successive Sebring endurance events from their beginnings in December 1950. 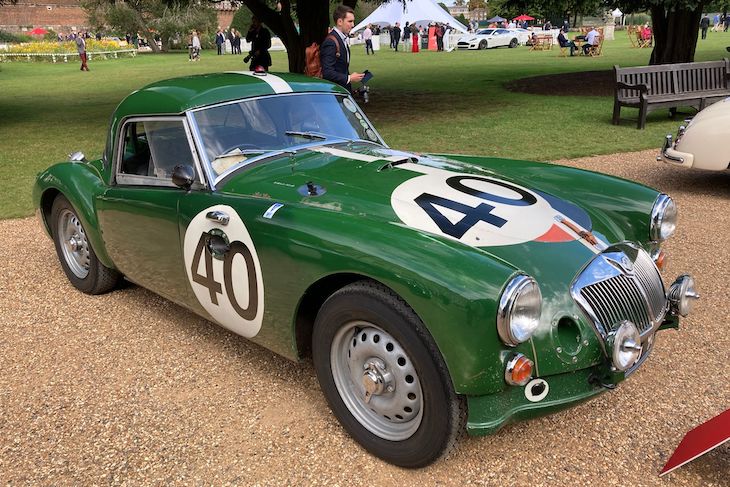 Driven by Americans Jim Parkinson and Jack Flaherty, the car finished fourth in class before being sold to a new owner who campaigned the car in North America over the following three years before the car dropped two valves at Daytona in 1963. 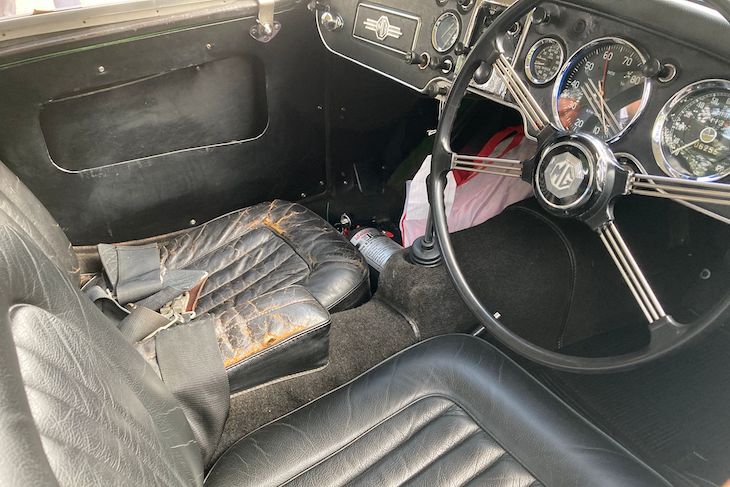 From its launch in 1955, over 101,000 MGA’s were built with over 80% of these being sold in North America such as the importance of this market that BMC (British Motor Corporation) became a major fixture on post-war America’s road-racing calendar. 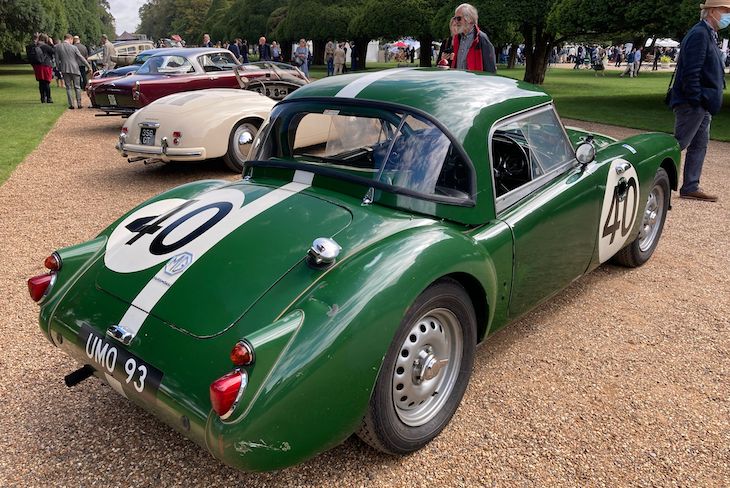 The final two cars of interest to me as a sportscar fan were both cars from Maranello and both front-engine V12 powered beauties. First up and entered rather bizarrely into a Concours class entitled ‘Future Classics’ alongside a Ferrari La Ferrari, a Singer 911, a Bentley GT convertible and the new Aston Martin Victor was a 550 GT1. 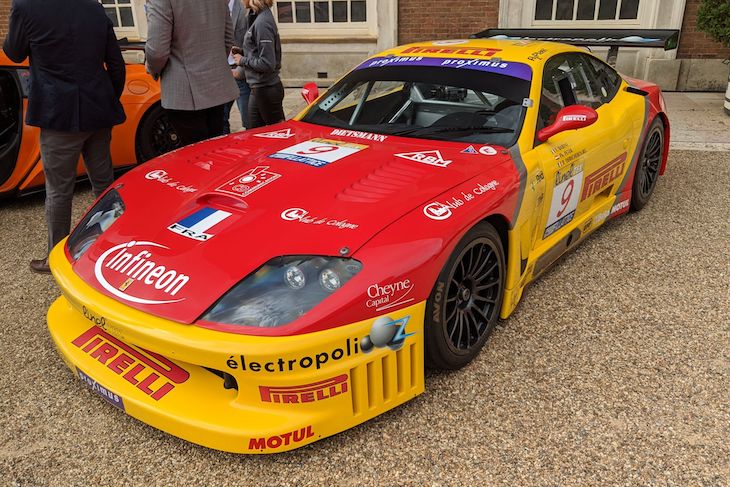 Rather than being one of the more widely known Prodrive 550’s this car was actually a car Ferrari had developed themselves. Spurred on by the success of the Prodrive cars in 2001/2 the bosses at Maranello finally persuaded the bean counters that a factory programme was a viable option. They took this sole remaining 550 and thanks to it being specially modified with a 6.0-litre engine and custom rear suspension were able to use this car as a test bed for the forthcoming 575 GTC car. 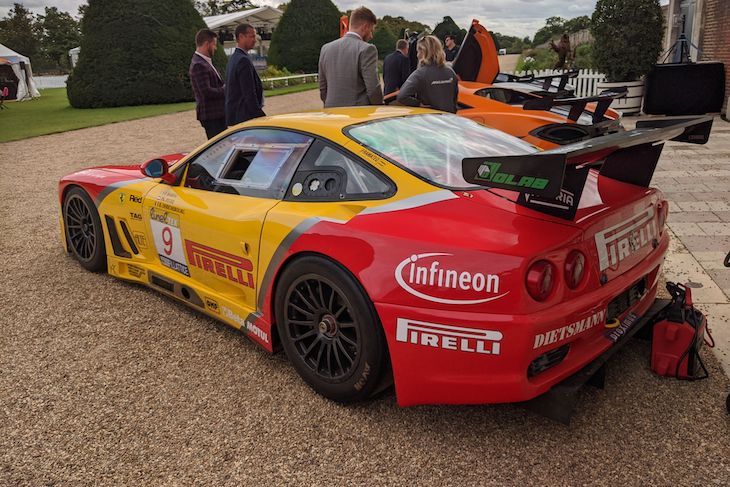 This car, believed to be the only 550 Maranello prepared by Ferrari for the FIA GT Championship, was campaigned throughout the 2003 season by the Pirelli-sponsored French team, JMB Racing, alongside its 575GTC sister-car. 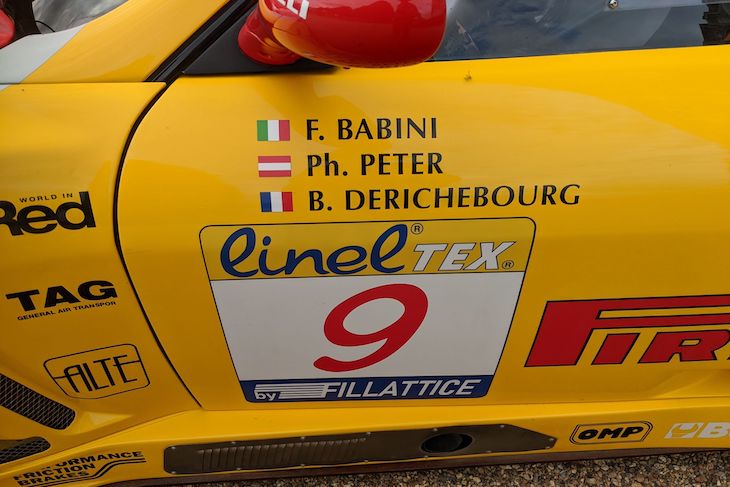 The red/yellow Pirelli scheme the car was shown in at Hampton Court is the livery the number 9 car wore for its only race win at the 9th round of the 2003 FIA GT championship at Estoril in Portugal, helping JMB to secure 4th place in the Teams Championship with the driving pairing of Philipp Peter and Fabio Babini. 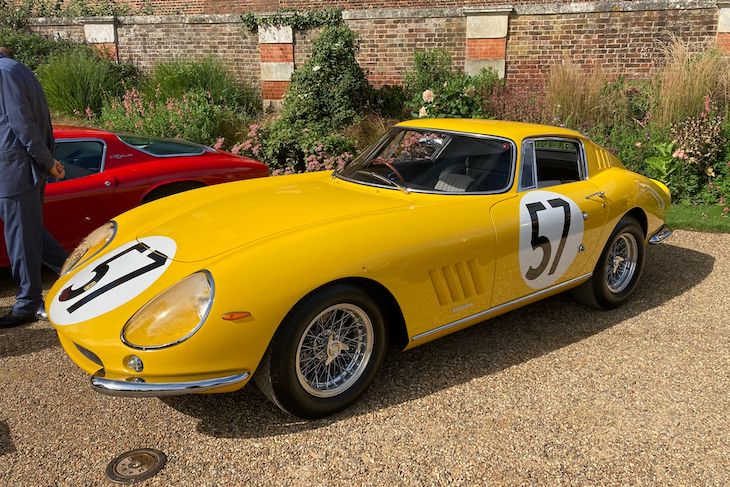 The second V12 Ferrari was not part of the main Concours event but being shown on the stand of Historic car seller Fiskens. The stunning bright yellow 275 GT Competizione has a great competition history, being the actual car entered by Ecurie Francorchamps for the 1966 24 Hours of Le Mans, driven by Pierre Noblet and Claude Dubois which finished 2nd in class and 10th overall. 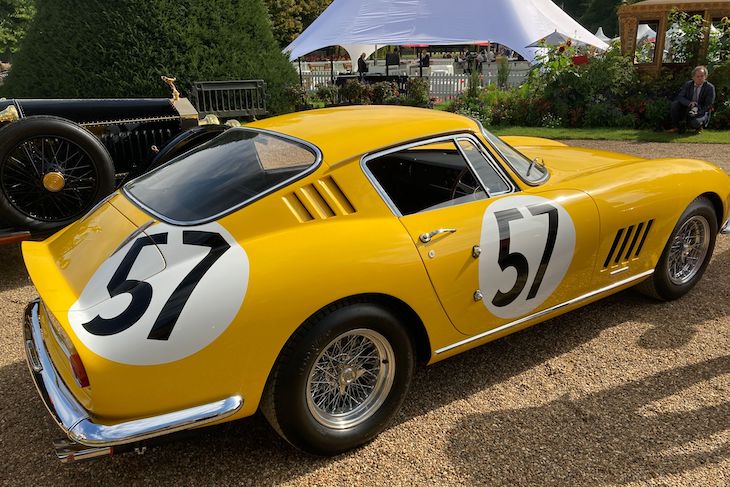 This glorious 275 GTB/C is only the third of twelve Berlinetta Competizione examples to be produced at MaranelloChassis 09027 has been meticulously and sympathetically restored in recent years, it was presented in immaculate condition, with matching numbers and a full Ferrari Classiche certification. Price, well what is they say? if you have to ask you probably can’t afford it, this probably explains the POA sign accompanying the car. 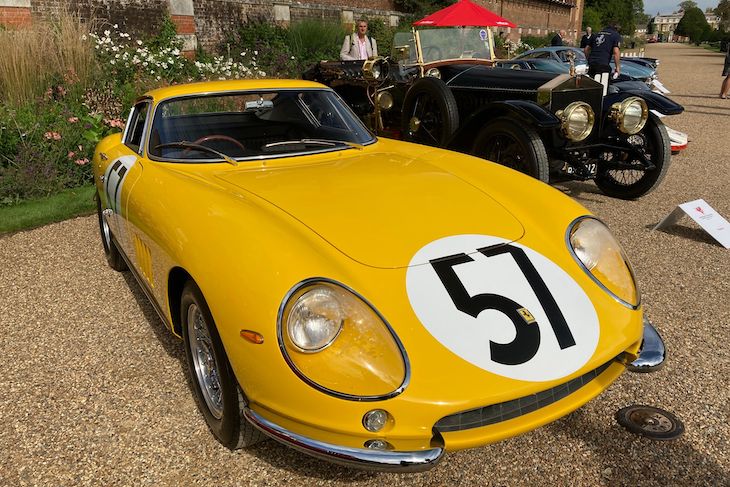