25-year-old Toyota factory driver Sho Tsuboi is in top form this autumn. He stands as the GT500 Championship leader in the Autobacs Super GT Series, and he is the most recent race winner in the Super Formula Championship. On Saturday, Tsuboi once again demonstrated his class, taking the victory for C.S.I Racing, alongside co-drivers Rintaro Kubo and Shinya Hosokawa, in the 2020 Pirelli Super Taikyu Series’ second round at Sportsland Sugo.

Saturday’s Sugo 3 Hour Race was the Group 2 race, for cars in the ST-4 and ST-5 classes. 22 cars were entered, and 21 took the start. The #225 Kobe Toyopet Motorsports Toyota 86 was expected to run well this weekend, piloted by young TGR-DC Racing School prospects Hibiki Taira and Seita Nonaka, and Kyojo Cup star Miki Onaga, one of six women in the field for this race. Unfortunately, they suffered machine trouble before the morning’s qualifying session, and would not start.

Rain persisted all day at Sugo, to the point that the race start was delayed to 13:15 JST, and when the race began, the first minutes were run behind the Safety Car. It was under this first Safety Car intervention that the polesitting #310 GR Garage Mito Inter 86, the #13 Endless Sports 86, and #18 WedsSport 86 pitted for the first of their two mandatory pit stops, including driver changes. Rintaro Kubo would only do two laps under Safety Car, and Ryo Ogawa would complete just one. 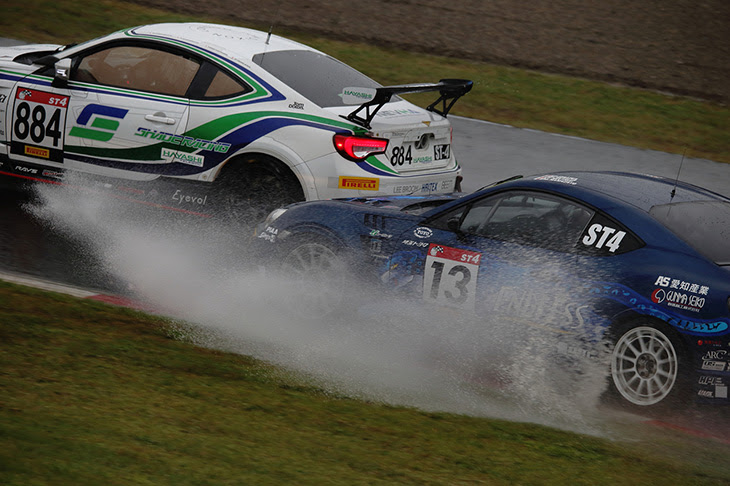 Once the Safety Car withdrew, it was Katsuyuki Hiranaka in the #884 Hayashi Telempu Shade Racing 86 that led early on, leading the first 40 laps and extending his margin to around 52 seconds by the end of his stint. Then, Hiranaka came to the pits, for a change of drivers to Toyota factory ace Yuji Kunimoto. Ritomo Miyata, another Toyota factory driver, emerged right behind Kunimoto and took the lead on Lap 41. On the very next lap, a Safety Car was deployed – the second of the race, excluding the start procedure – and both cars dove into the pits for their second driver changes. Keishi Ishikawa relieved Kunimoto after just two laps, while Takamitsu Matsui relieved Miyata.

Meanwhile, the #310 GR Garage Mito Inter 86 had made its second mandatory full-service stop on Lap 31, when Shinya Hosokawa climbed out, and Sho Tsuboi climbed aboard for the final two hours of the race. When the #884 and #13 Toyotas pitted, Tsuboi was right behind them in 3rd, with Takeshi Tsuchiya 4th in the #18 WedsSport 86.

The race resumed on Lap 53 and went uninterrupted to the end. On Lap 56, Tsuboi passed Ishikawa for 2nd, and then began to chase down his former Super GT co-driver Matsui for the lead. Sizing up his move into Horseback Corner (Turn 9), Tsuboi drove through into the race lead. Matsui wouldn’t go away quickly, and the two cars ran within two seconds of each other for most of the final hour of the race.

In the end, the #310 GR Garage Mito Inter 86 of Kubo, Hosokawa, and Tsuboi held on to take the win in the Group 2 race by 1.882 seconds over the #13 Endless 86 of Ogawa, Miyata, and Matsui. The #884 Shade Racing 86 of Hiranaka, Kunimoto, and Ishikawa completed the overall podium in 3rd, another 14.790 seconds back of the Endless 86. Tsuchiya and Daiki Fujiwara drove the #18 WedsSport 86 to 4th, one lap off the lead, while the #60 Team G’Motion Honda Integra Type R (Resshu Shioya/Takuya Shiga/Takao Seto) dropped out of the podium fight due to a muffler issue, and finished 11 laps down in 5th. 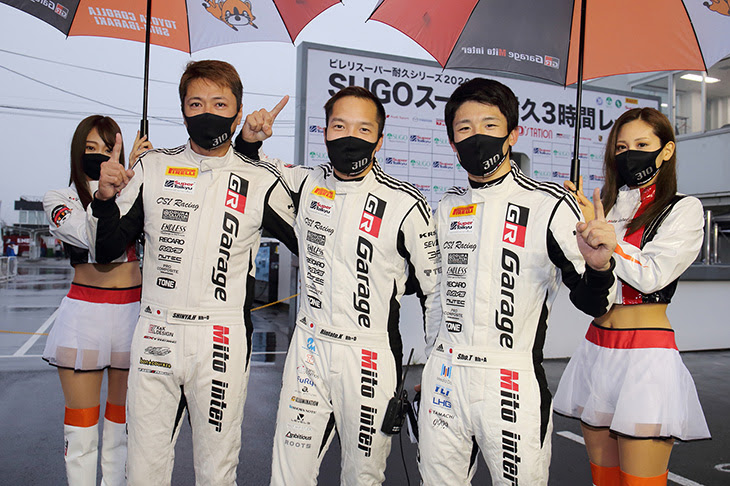 “The timing of the second pit stop was a complete disaster, but the safety car helped me close the gap quite a bit, so I thought if I could get past then I could win the race,” Tsuboi said after the race.

“I was able to overtake both cars on the track, and from that point on, my pace was also good, so although it took a long time, I think we feel a great sense of achievement with this victory. I took my first win in Super Formula two weeks ago, and I am the point leader in Super GT as well, so in order not to disrupt this trend by myself, I will work hard again for the upcoming races.” 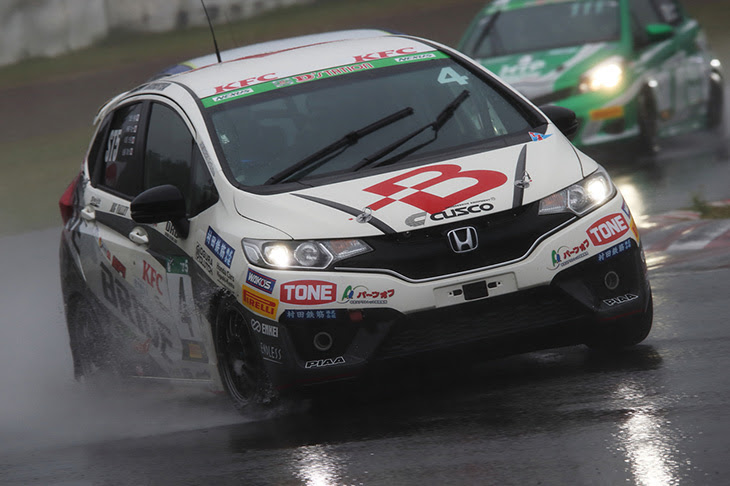 The #4 Team Bride Honda Fit of Yuya Ohta, Hiroshi Ito, and Mitsuaki Matsuo pulled through in a gripping battle for the top spot in the ST-5 class against the #88 Murakami Motors Mazda Roadster of Hiroyuki Murakami, Yasunori Nakajima, and Tatsuya Tanigawa.

Murakami led the first dozen laps, but was then overtaken by the #456 odula Avantech Roadster of Riku Hashimoto. By Lap 29, Koji Yamanishi in the #50 Love Drive Racing Roadster was up into 2nd and had moved right onto the tail of Hashimoto. On Lap 40, the two cars made contact at the Final Corner, sending both cars dropping down the order and Murakami back into the class lead.

Murakami pitted on Lap 41, Nakajima took the wheel of the #88 Roadster under the Safety Car, then pitted again after two laps to be replaced by GT500 race winner Tanigawa to the end. Ohta started the race in the #4 Bride Fit, Matsuo took over on Lap 36, then after 9 laps, Ito was installed to the end.
From the final Safety Car restart it was a gripping fight for the race lead. Tanigawa’s 25-second lead evaporated as the front-wheel drive Honda of Ito began tearing its way through in the wet conditions.

Ito took the lead on Lap 58. Then Ito ran off course while trying to extend his lead, Tanigawa caught him coming out of the Final Corner on Lap 66, then overtook Ito on Lap 67. Ito remained close to Tanigawa, not allowing the orange Mazda to escape. Finally, with less than 10 minutes left in the race, on Lap 83 Ito passed Tanigawa at Rainbow Corner (Turn 8) to take the lead for the final time in the race, securing Team Bride’s first win of the 2020 season – and pulling away to a final margin of victory of 4.746 seconds. 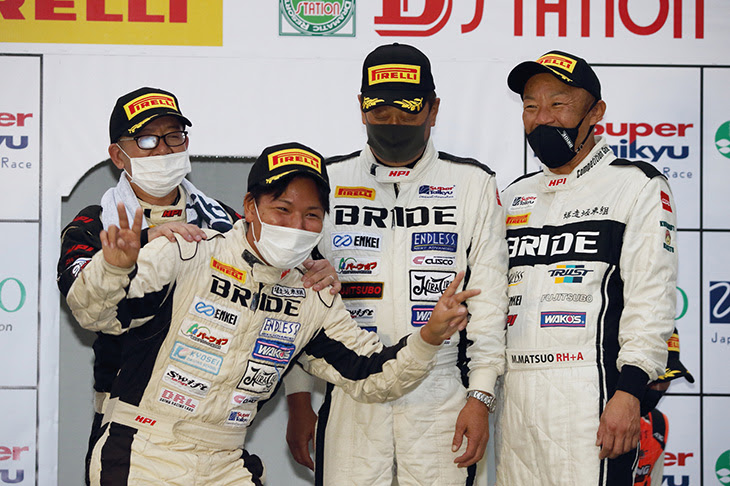 “My glasses fogged up, and I was trying to wipe them off with my fingers and they flew off! I couldn’t see very well, so when I noticed Horseback Corner right in front of me, I thought, “Wow!” Ito laughed, as he explained his off-track excursion that briefly cost him the top spot. “I guess it was fun to watch, but I was driving all alone when I ran off. Still, It was my first Super Taikyu win. It was really good!” 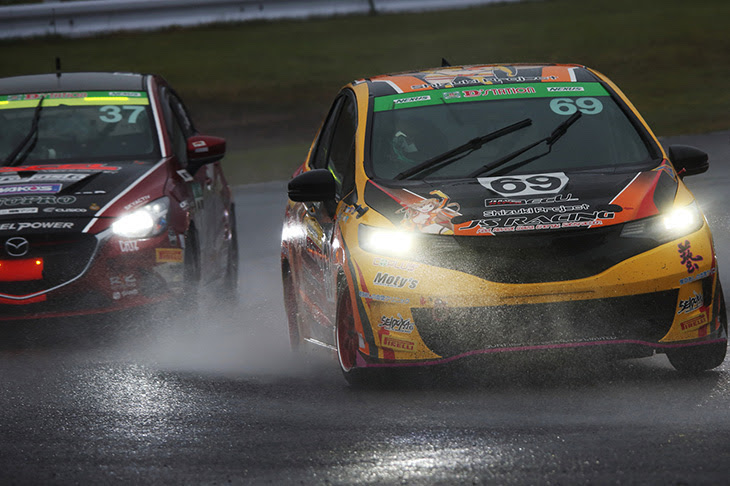 Mazda’s head of vehicle design, Ikuo Maeda, entered in a second Murakami Motors Roadster this weekend. Driving the #120 alongside co-drivers Haruhiko Sugino and Teru Nakamura, Maeda ran for 26 laps, and the team finished 12th in class, two laps off the lead.

Qualifying was cancelled due to heavy fog, so the grid for Sunday’s race will be set based on the results of the previous round, the Fuji Super TEC 24 Hours. Therefore, the #888 Hirix Good Day Mercedes-AMG GT3 of Daisuke Yamawaki, Shinichi Takagi, and Shaun Thong will start on pole position.

The Group 1 field will also be down one car, after the #81 Daishin GTNET Motor Sports Nissan GT-R GT3 withdrew from the race. Ryuichiro Oyagi, one of the team’s drivers, posted on social media that damage sustained at the Fuji 24 Hours took longer to repair than expected, so the two-time ST-X Champions will use this as their “drop round”, and return at the next round in Okayama on 31 October-1 November.