The Swiss squad was in a class of its own by the latter stages of the 60-minute race, securing its best-ever result in GT World Challenge Europe Powered by AWS competition. It comes just two weeks after Costa and Altoè scored the team’s maiden Sprint Cup victory at Zandvoort.

The #14 Lamborghini led away from pole with Ricardo Feller at the wheel, while the #163 gained a spot from third on the grid when Altoè passed Luca Stolz (#4 HRT Mercedes-AMG) on the dash to turn one.

This arrangement did not last long, however, as the charging Jim Pla put a move on Altoè during the opening lap to take second in the #89 AKKA ASP Mercedes-AMG. Stolz ran fourth, with the leading quartet able to pull away from the rest of the pack.

The race was neutralised after 10 minutes when Chris Froggatt lost control of his #93 Sky Tempesta Racing Ferrari and slid into the gravel, which ultimately led to a safety car period. Crucially for the Pro-Am championship leaders, Froggatt was able to re-join the contest and salvage crucial points. When racing resumed the order at the front remained unchanged, the top-four once again edging away, while Timur Boguslavskiy led the chasing cars in the #88 AKKA ASP Mercedes-AMG.

The pit stops would play into the hands of the #88 crew. Most of the runners elected to stop early, with Emil Frey servicing both of its cars at the same time. This paid off as the Lamborghini cars were able to emerge first and second, the #14 still running ahead of the #163. 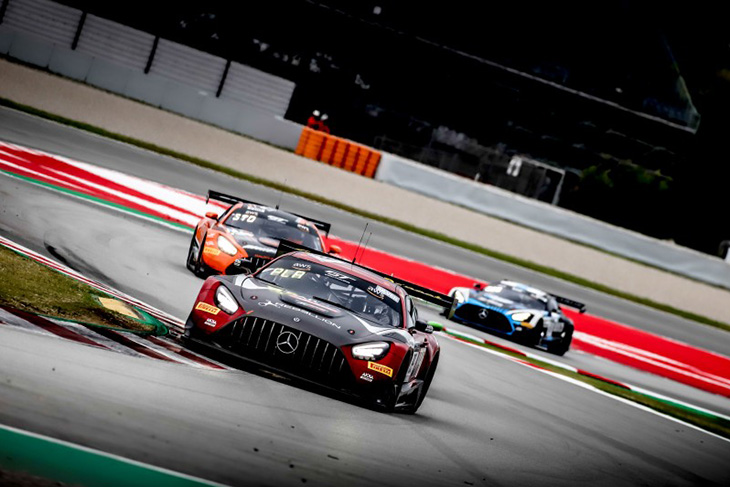 Jim Pla handed the #89 Mercedes-AMG to Benjamin Hites, who slipped one spot to third, while Raffaele Marciello profited from an excellent stop by his AKKA ASP crew and jumped to fourth after taking the #88 from Boguslavskiy. Maro Engel ran fifth in the #4 HRT Mercedes-AMG, just one place ahead of championship rival Dries Vanthoor (#32 Belgian Audi Club Team WRT), who made the most of a solid stint by Charles Weerts and a rapid turnaround from his crew.

Marciello was soon on the move, passing teammate Hites despite a determined defence by the young Chilean. By this stage, the Emil Frey cars had disappeared up the road, with both Mikäel Grenier in the #14 and Albert Costa in the #163 enjoying excellent pace. With the #163 still firmly in the title battle, the two swapped positions on the pit straight with 15 minutes left on the clock, the Emil Frey squad taking advantage of its dominant position to maximise its championship chances.

With Marciello some way behind the leaders and several seconds clear of Hites, the battle for fourth position provided the entertainment over the closing laps. Engel was visibly determined to pass the #89 AKKA ASP car and take maximum points, but Hites showed no sign of cracking under the pressure. The HRT driver launched an ambitious move into the final chicane only for the door to be closed and was lucky to maintain control.

This gave Vanthoor a chance to overhaul his championship rival and the Audi man was on right with the Mercedes when a second safety car period was required during the final minutes. This time it was caused by the #107 CMR Bentley, which had pulled off the track with smoke rising from its engine bay.

The race went green again with just one lap remaining, making the restart critical. All of the front-runners judged it well and the order remained unchanged during the final lap, with Costa taking victory on home turf ahead of teammate Grenier and Marciello in the #88 AKKA ASP car. Hites was a career-best fourth, followed by title rivals Engel and Vanthoor. Kelvin van der Linde followed his teammate home in the #31 Belgian Audi Club Team WRT machine, while the top-10 was completed by the #66 Attempto Racing Audi, the #2 Toksport WRT Mercedes-AMG and the #26 Sainteloc Racing Audi.

The #14 Emil Frey Racing Lamborghini also clinched Silver Cup honours, leading several of its class rivals at the front of the overall order. The #89 AKKA ASP Mercedes-AMG of Pla and Hites was second, followed by the #2 Toksport WRT crew of Juusso Puhakka and Oscar Tunjo. 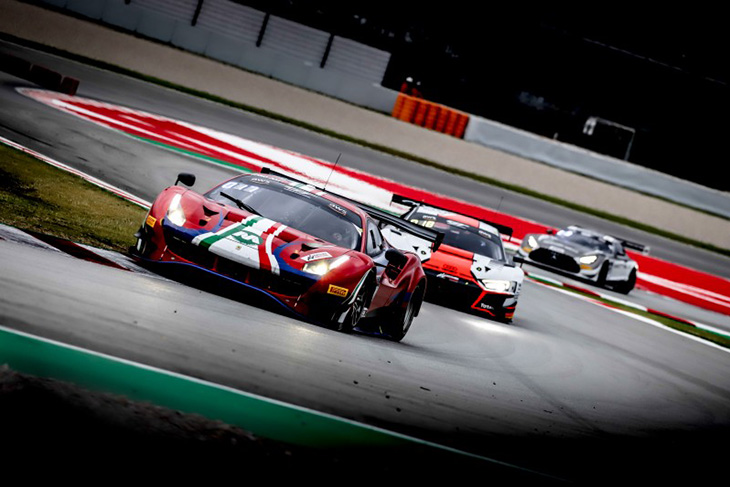 Early problems for the #93 Ferrari gave their class rivals a chance to make up ground in the championship. The #52 AF Corse Ferrari of Louis Machiels and Andrea Bertolini took the win after a final-lap scrap with the #20 SPS Automotive Performance Mercedes-AMG, which ended its race in the gravel trap. This saw the #18 ERC Sport Mercedes-AMG take second in Pro-Am, while the SPS car was classified third ahead of the recovering Tempesta machine.

The battle of the overall Sprint Cup championship is closer than ever following today’s race, with Vanthoor and Weerts now just five points clear of Stolz and Engel. Boguslavskiy is eight points off top, while the #31 WRT and #163 Emil Frey crews are also within striking distance.

The overall and class titles will be decided on Sunday when two more 60-minute races will play out at Circuit de Barcelona-Catalunya.

Qualifying for both will run back-to-back from 09.00, while the season-ending Sprint Cup contests will take place at 12.25 and 16.30. When the final chequered flag falls, the first GT World Challenge Europe Powered by AWS champions of 2020 will be crowned.