Torrential rain, standing water, low visibility, and a brand-new track was still not enough to slow down the #3 Corvette C8.R of Antonio Garcia and Jordan Taylor who claimed their fifth win of the season at the Charlotte Motor Speedway ROVAL, further extending their lead in the championship.

The GT-only sprint race was likely one of the best races of the season as teams battled the high banks of the speedway with the lows of the infield that provided ideal geography for standing water and puddles to form. Garcia survived a late-race restart where he fended off both the #24 BMW M8 GTE and the #25 BMW M8 GTE to claim the win.

Five cars retired from the race, one of them being the #4 Corvette C8.R of Tommy Milner and Oliver Gavin. With under ten minutes to run, the back of the Corvette snapped around on the banking of Speedway Turn 4. Milner could do nothing to prevent a crash as the front of the car slammed the outside wall.

DRAMA: Tommy Milner in the No. 4 @CorvetteRacing is off with heavy damage after a bizarre crash that saw him slam the outside wall at NASCAR Turn 4. Milner is out of the car without assistance and looks fine. #MOTULGP #IMSA #ROVAL pic.twitter.com/GN9lHTG8LL

Judging by the nature of the spin, it looked to be the result of a mechanical failure in the car. The right rear suspension, which did not hit the wall, was seen to be ajar when the car came to a stop. Milner walked away without assistance, but his crash did leave his teammate to have to fend off a challenge from the two BMW entries.

“Feeling good. Seems like we broke something in the right rear unfortunately. The guys are assessing everything now and we’ll get to work to get her fixed for Petit,” Milner tweeted after the race.

John Edwards and Jesse Krohn in the #24 BMW ended the race in second. Edwards led through the middle portions of the race and showed good pace before Garcia began reeling him in.

Garcia got better drive out of Turn 8 and took advantage of a small wiggle from Edwards to get the pass done. It later turned out to be the pass for the win.

Antonio Garcia in the No. 3 @CorvetteRacing has taken the lead of the race. Fuel is still a question for both teams, though. Watch out for a splash-and-dash. #IMSA #MOTULGP #ROVAL pic.twitter.com/mZbgy8eiVD

The #25 BMW M8 of Connor De Phillippi and Bruno Spengler rounded out the podium. That car had a minor spin on lap one of the race but as it turned out, a simple spin was nothing to be concerned about in GTLM.

What was to be concerned about was Porsche’s disaster of a day. It began in qualifying when Laurens Vanthoor made contact with the wall and damaged the #912 Porsche 911 RSR. In the race, the story was no different as Vanthoor spun in the wet conditions and slid into the barrier, leading to the retirement of the #912 Porsche after just four laps.

No worries then, Porsche still has their #911 Porsche 911 RSR in the running. That was until Frederic Makowiecki went for a spin on the exit of Turn 1 while the #912 Porsche was still in the pits trying to be repaired. After eight laps for the #911 Porsche, their day was done.

FULL COURSE YELLOW: Disaster for @PorscheNAracing! Both of their cars have spun with the No. 912 Porsche in the pits after Vanthoor hit the wall. Both cars are off the lead lap. #IMSA #MOTULGP pic.twitter.com/OZziDw5ZNL

While the race-winning Corvette completed 62 laps, Porsche completed just twelve laps across both of their cars, two of those laps were done while their cars were limping back to the pits. Neither Nick Tandy nor Earl Bamber completed a lap in the race.

They finished last and second-to-last. It was a race to forget, it was a day to forget and it has been a season to forget for Porsche – not the way they would have wanted their final season to go.

The #3 Corvette crew, meanwhile, is agonizingly close to sealing the GTLM team’s and driver’s championship in the debut season of the Corvette C8.R. A decent showing at Petit Le Mans could be enough to wrap things up. If they don’t get the job done at Road Atlanta, they will likely take the title at Weathertech Raceway Laguna Seca, the penultimate round of the season before the rescheduled Sebring 12 Hours.

Antonio Garcia: “It was very stressful right away. The BMWs were really fast when there was a ton of standing water. But the C8.R ran again perfectly in the end. I got up to the 24 and he started to lose pace. We gained some time and I saw my chance. He was struggling with tires, but so was I. I stayed calm and knew the section at Turn Five, Six and Seven was going to be my chance. As soon as he made a little mistake, I went for it, kept my head down and it’s another victory for Corvette Racing.”

Jordan Taylor: “It wasn’t easy. It was the same for everyone in that situation. For us leading the championship, it was all about minimal risk at that point. You weren’t going to win the race in those 20 or 30 minutes. It’s all going to be about survival, handing off the car to Antonio and waiting for it to dry out. Thankfully it did, the track conditions came to our Corvette, and Antonio never put a foot wrong to bring home another win. It’s an amazing year for the new C8.R and we’re going to Petit Le Mans with some nice momentum. Six wins for a brand new car, no one would have ever expected this. Hats off to Corvette Racing. I’m sorry to see what happened to the No. 4 car, but I was glad to see Tommy get out.”

62. That’s the number of wins Bill Auberlen has to his name after what can only be described as a masterclass in wet-weather driving was put on by the veteran in the #96 Turner Motorsports BMW M6, who, with co-driver Robby Foley claimed the win in GTD. 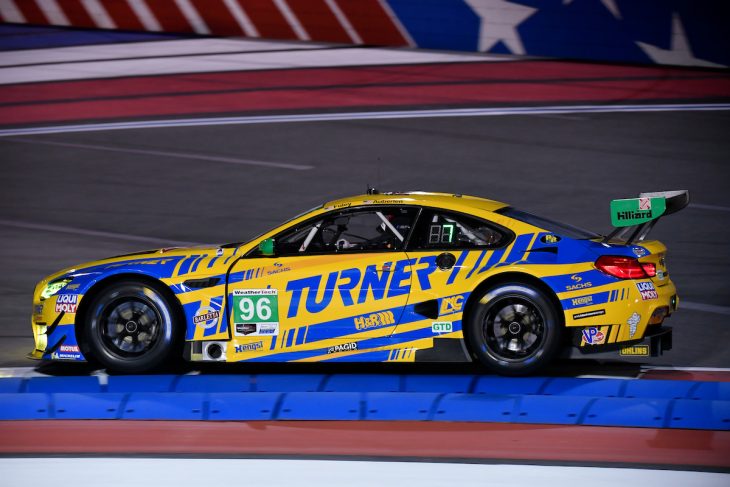 Auberlen was catching cars, passing them, and leaving them behind in ways that made you second guess the timing and scoring screens. In some stages of the race, Auberlen was setting lap times nearly three-seconds quicker than the rest of the field.

His stint was simply one of the most impressive drives of the season across any of the classes in any IMSA series.

Auberlen’s fastest lap of the race, a 1:27.546 was just 0.652 seconds away from the best time set by John Edwards in the BMW M8 GTE. The gap from Auberlen’s best time to the next best GTD time? 0.656 seconds. In other words, Bill Auberlen’s pace was closer to that of the GTLM field than it was to the GTD field. 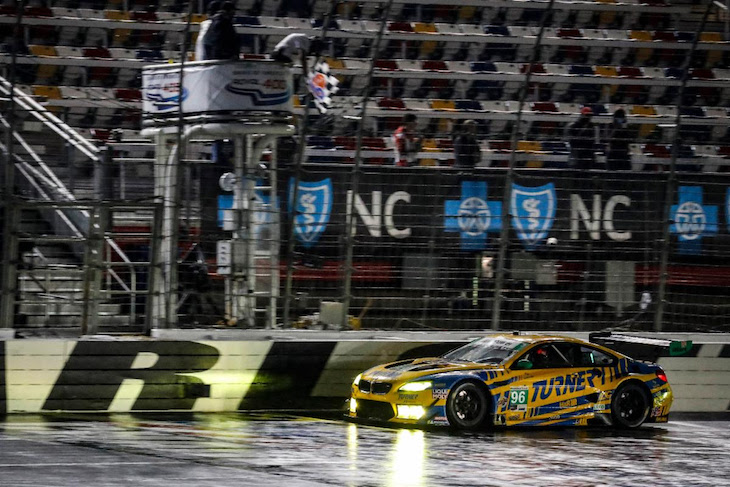 The #16 Wright Motorsports Porsche of Patrick Long and Ryan Hardwick ended the race in second and have gone from quietly lurking in the shadows of the championship leaders to bursting into the conversation. 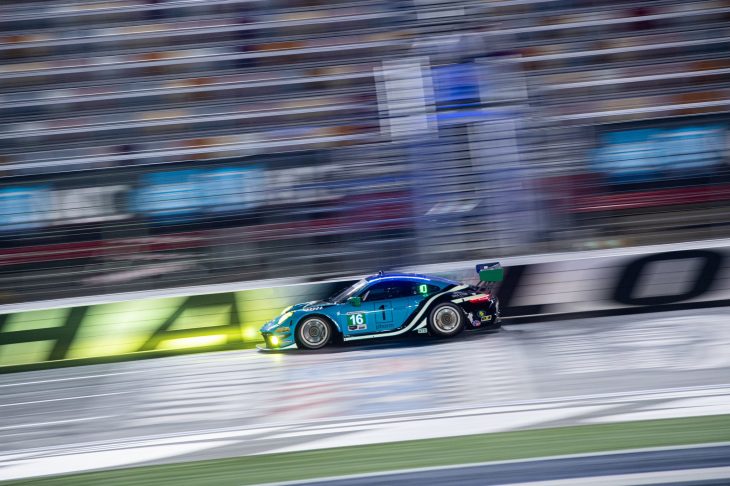 Long spent most of his race fending off his two championship rivals, the #14 AIM Vasser Sullivan Lexus RC-F GT3 and the #86 Meyer Shank Racing Acura NSX GT3. While the Lexus and the Acura scrapped behind him, Long kept the Porsche on the road and did not give an opportunity for either of them to make a pass.

On the final restart of the race, Jack Hawksworth in the #14 Lexus tried to make a pass on Mario Farnbacher in the #86 Acura. The attempt was a low-percentage one and the two cars collided, the #86 Acura spinning off track with the #14 Lexus being handed a drive-thru penalty.

The GTD-championship contenders have collided! No. 86 @MeyerShankRac Acura and the No. 14 @AVSautosport Lexus come together after Jack Hawksworth tried to make a pass in the final chicane. Drive-thru has been given to the No. 14 Lexus! pic.twitter.com/WgQIef5fZM

With that contact, they opened the door for the #16 Porsche to join them in the championship fight and the Wright Motorsports crew took full advantage. The #86 Acura finished in seventh and the #14 Lexus finished in eighth.

The podium in GTD was completed by the #23 Heart of Racing Aston Martin Vantage of Ian James and Roman de Angelis. For Heart of Racing, it is a much-needed result after struggling to breach even the top five for much of the season.

Two GTD cars did not finish the race. The #22 Gradient Racing Acura NSX of Marc Miller and Till Bechtolsheimer and the #44 GRT Magnus Racing Lamborghini Huracan GT3 of Andy Lally and John Potter.

Bechtolsheimer made contact with the wall early in the race, leading to significant damage that ended their day on the spot. The #44 Lamborghini, meanwhile, battled a mechanical issue that causes two punctures on the banking for Lally.

“Rough night. We blew two right rear tires in NASCAR 3-4 and I was lucky enough to save it both times. The team retired the car while trying to figure out the reason,” Lally tweeted after the race. The team opted to retire the car and not to risk further damage with track action at Petit Le Mans just five days away.