The Emirati-based team, which has so far completed 189 laps of the 4.983km Autodromo di Pergusa, started and ran 3rd overall during the opening stages of the race, but has since pulled a lap clear of its nearest rivals following a string of scintillating laps from Mathieu Jaminet. The Frenchman has posted seven of the 19 overall fastest laps of the event so far, his fastest being a 1m 34.612s.

Having collected the chequered flag at the end of ‘part one’, GPX Racing has also been awarded the di Martino trophy. The Coppa Florio trophy will be bestowed upon the overall winner tomorrow.

The MP Motorsport Mercedes-AMG GT3 Evo (#19, Henk de Jong / Jaap van Lagen / Rik Breukers) started from pole position and ran 2nd during the opening stint, but quickly fell back into the pack after the Dutch team opted to complete a full pit stop during the race’s first Code 60 caution period, just 18 minutes after the green flag flew. Despite being served a 60-second post-race penalty for not respecting each driver’s mandatory rest time, the Mercedes will start tomorrow’s race in 2nd after a strong recovery drive. The CP Racing Mercedes-AMG GT3 Evo (#85, Charles Putman / Charles Espenlaub / Joe Foster / Shane Lewis) leads the way in GT3-AM and will start 3rd overall. 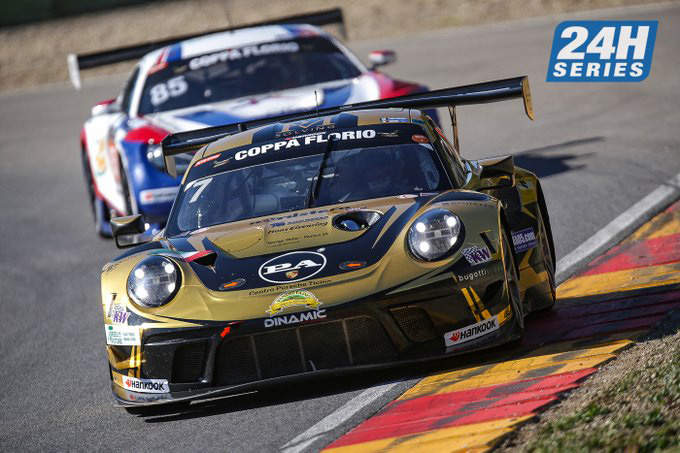 Further back, the Herberth Motorsport Porsche 911 GT3 R (#92, Tim Müller / Jürgen Häring / Taki Konstantinou / Alfred Renauer) has powered its way back up to 6th overall after a troubled opening. The #92 Porsche, which currently leads the Overall GT Teams’ standings in the 24H SERIES Europe, was left stranded on the second lap after a suspected collision with the Dinamic Porsche 991-II Cup (#907, Simone Laquinta / Matteo Malucelli / Stefano Monaco / Roberto Pampanini). Ironically, the latter, which also fell to the tail of the field on the second lap, now leads the ‘991’ class and sits behind Herberth Motorsport on the road in 7th. The Italian team’s sister Lamborghini Huracán Super Trofeo (#793, Amedeo Pampanini / Nicolas Sturzinger / Stefano Monaco) lies 9th after a tough opening six hours.

The PROsport Racing Aston Martin Vantage AMR GT4 (#401, Nico Verdonck / Rodrigue Gillion / Tom Heeren) currently leads the GT4 class, despite an early spin and a near miss with the #907 Dinamic Porsche 911-II Cup in the closing stages, the latter having rejoined the track after an off at turn 18 right in front of the GT4 class leader.

Having run solidly in the GT3-AM top three throughout the afternoon, the MP Racing Mercedes-AMG GT3 Evo (#58, Thomas Gostner / Corinna Gostner / David Gostner) ended part one of the race prematurely after its left front brake caliper ignited in the re-fuelling area, fortunately without injury.

The Avelon Formula Wolf GB08 Tornado meanwhile (#45, Ivan Bellarosa / Guglielmo Belotti) is still circulating in 20th. The PX-class prototype made a lightning start from the front row and led the race outright for the opening 90 minutes, but lost more than two hours in the pits to suspected gearbox issues. 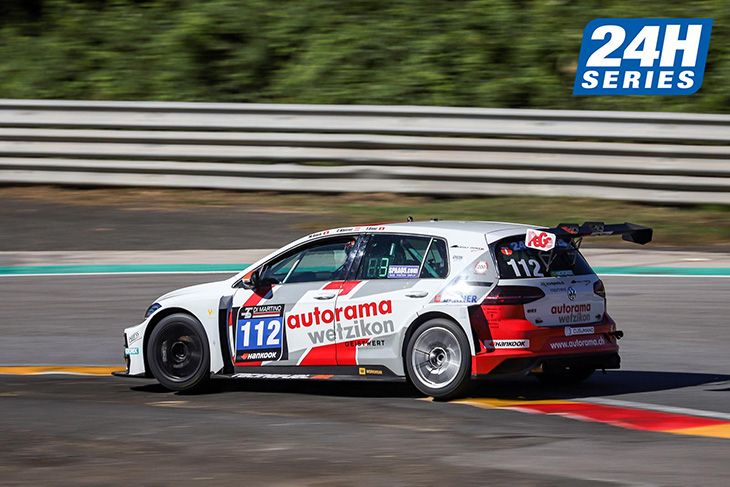 The Red Camel-Jordans.nl CUPRA TCR (#101, Ivo Breukers / Luc Breukers) led the TCE division comfortably from the second hour onwards, but lost time when the CUPRA TCR ran wide at turn 18, damaging the right rear corner. A few laps later, the CUPRA was off again at the same point of the track, the front left this time making heavy contact with the tyre barriers. Extensive repairs mean the team has yet to emerge from the garage.

That means Autorama Motorsport, the current standings leader in the 24H SERIES Europe Overall TCE Teams championship, now leads the TCE division outright, despite dropping to the absolute tail of the field at the start of the race. The Volkswagen has completed 172 laps of the 4.983km Autodromo di Pergusa thus far, nine more than the 2nd-placed Red Camel-Jordans.nl.

Despite suffering suspension issues early on, the AC Motorsport AC Motorsport Audi RS3 LMS (#188, James Kaye / Ricky Coomber / Marcus Menden) currently holds the final podium spot ahead of the JR Motorsport BMW M3 E92 (#703, Ted van Vliet / Willem Meijer). The latter though, which started from TCE pole position, has yet to emerge from the garage after a mechanical failure caused the BMW’s rear axle to lock and spin on the front straight shortly after the first hour of racing had been completed.

The green flag for the final six hours of the COPPA FLORIO 12H Sicily will fly tomorrow morning at 11.00 hrs local time, and the race will run uninterrupted until 17.00 hrs after which the first official winner of the Coppa Florio will be crowned for the first time since 1981.