In Heat 4 of the Ligier European Series, the Belgian Milo Racing team and its driver Kévin Balthazar in the #81 Ligier JS P4 took the laurels in both races.

In the Ligier JS2 R category, M Racing won both races. Mathieu Martins in the #86 took the honours in race 1 and Natan Bihel in the #66 stepped onto the top step of the podium in race 2. After the non-stop action at Monza, the suspense remains intact for the season finale at Portimão.

At 10:50am, 15 Ligiers, ten JS2 Rs and five JS P4s were ready for race 1 of Heat 4 of the series. On row one, Andrea Dromedari in the #50 HP Racing Team entry, by his side, Kévin Balthazar in the #81 Milo Racing Ligier JS P4. These two drivers were separated by just a tenth of a second in qualifying. On row two, a newcomer to the series, John Corbett in the #88 Monza Garage Ligier JS P4 and the fastest GT entry in qualifying, the #86 M Racing Ligier JS2 R, with Mathieu Martins behind the wheel. Fabien Michal in the #38 HRC Ligier JS2 R and Nerses Isaakyan at the controls of the #17 Arctic Energy Ligier JS2 R fill out row three.

A minor incident on the formation lap re-shuffled the order in the JS P4 category. The #50 HP Racing Team car stopped, which promoted Kévin Balthazar in the #81 JS P4 into the lead of the race. Andrea Dromedari in the #50 JS P4 returned to the track and began his charge through the field. On lap four he overtook the #88 entry and moved into second place among the sports prototypes. He continued to narrow the gap. On lap six, three JS P4s led the way. 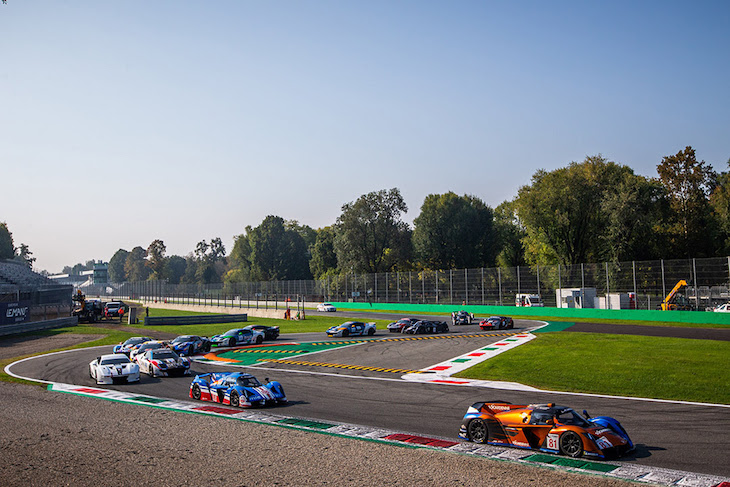 This top three remained unchanged and despite the pit stops, which saw Federico Leo take over for John Corbett in the #88 as well as a neutralisation, the three JS P4s took the chequered flag with Kévin Balthazar taking a start to finish win with a six-second margin of victory over Andrea Dromedari in the #50. The Belgian driver clinched his third victory of the season. Federico Leo in the #88 set the fastest lap in the race with a time of 1:57.640s. 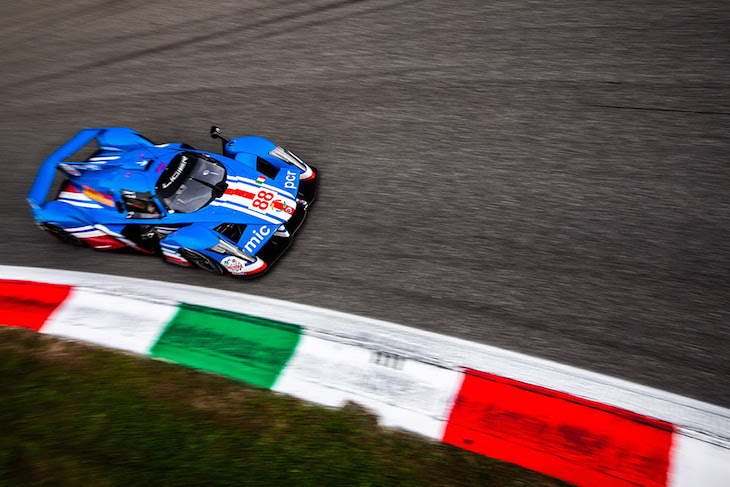 The Ferguson brothers in the #27 Raw Motorsport car started at the rear of the field and the Marchois father and son duo in the #14 MV2S Racing who didn’t take part in qualifying started last. They finished fourth and fifth respectively in the category and in the overall top six.

There were more than a few plot twists in the JS2 R category. Fabien Michal in the #38 HRC Ligier JS2 R passed Mathieu Martins in the #86 M Racing entry on the opening lap to take the lead in the category. While they battled for the lead, Sébastien Baud in the #74 Cool Racing moved up to third place. Mathieu Martins briefly re-took the lead. On lap four, Sébastien Baud in the #74 moved into first place. Unfortunately, the championship leader was hit by the #88 Monza Garage JS P4 and dropped down the order. Nerses Isaakyan in the #17 Arctic Energy car took the lead, followed closely by Mathieu Martins in the #86 M Racing JS2 R and #38 HRC car of Fabien Michal. 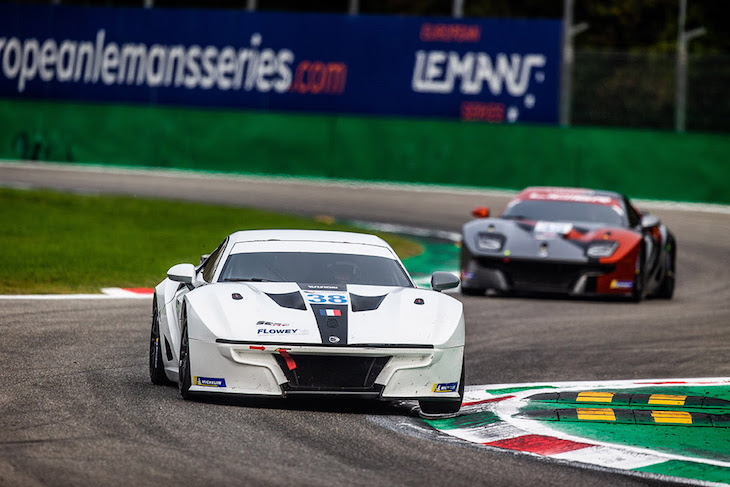 Another regrettable incident: Sébastien Baud ran into Natan Bihel in the #66 M Racing machine. He received a two-minute stop and go penalty that saw him plummet to the bottom of the order. Sadly, Natan Bihel, who was setting the fastest times in the race at that time, retired.

Mathieu Martins in the #86 and Nerses Isaakyan in the #17 had a spirited duel and the young French boy lost the lead following the mandatory pit stops. The #32 Sub5zero Motorsports car driven by Andreas Ritzi and Riccardo Di Persia was the last to come in. A clever bit of strategy but not without great risk. While they were among the lead group of cars, they were handed a two-minute stop and go penalty for not making their mandatory stop in the pre-determined pit window. 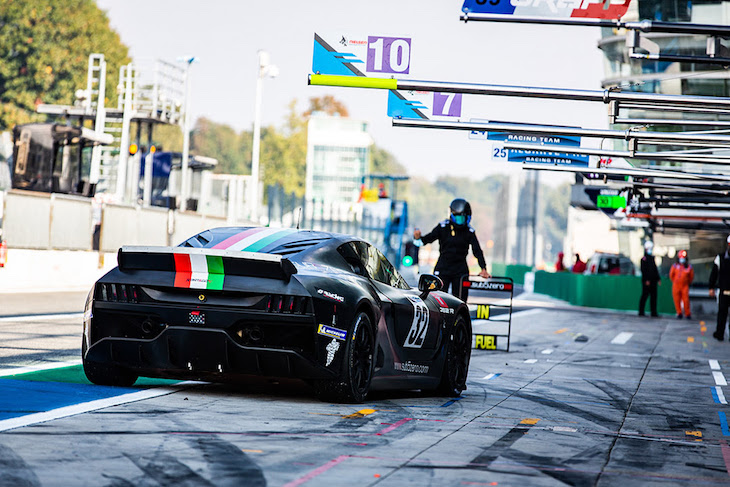 Mathieu Martins in the #86 M Racing Ligier JS2 R went on for the win, despite the violent crash of Sergey Egorov in the #17 Arctic Energy and the safety car period that followed. Thankfully, the Russian driver escaped uninjured. Behind, the #86, the #38, #45, #30 and #46 entries were all contenders for a podium result. When the race resumed, the #30 CD Sport duo of Dégremont and Berthelot got the better by just a few tenths of a second of the #45 MV2S Racing of Makarovskii, while the #46 sister car, driven by Antoine Chapus and Gaëtan Essart, finished fifth in the category. Laurent Millara in the #69 M Racing JS2 R rounded out the top six. 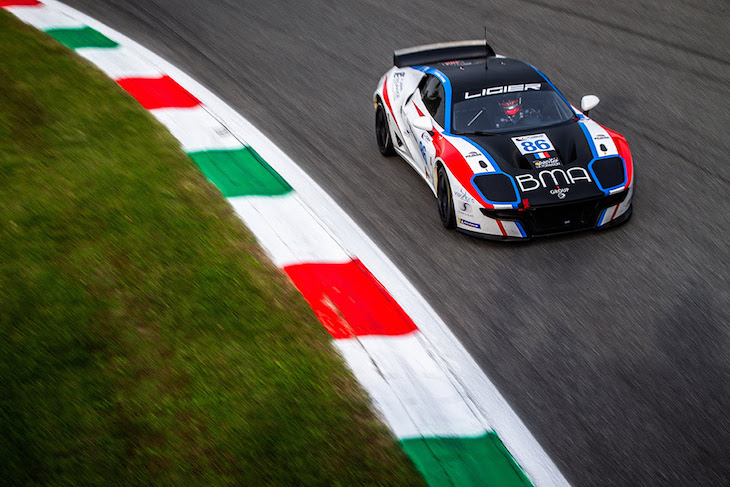 Due to its accident in Race 1, the #17 Arctic Energy Ligier JS2 R was not on the grid for the 2:50 pm start of Race 2 which was hotly contested in both categories. 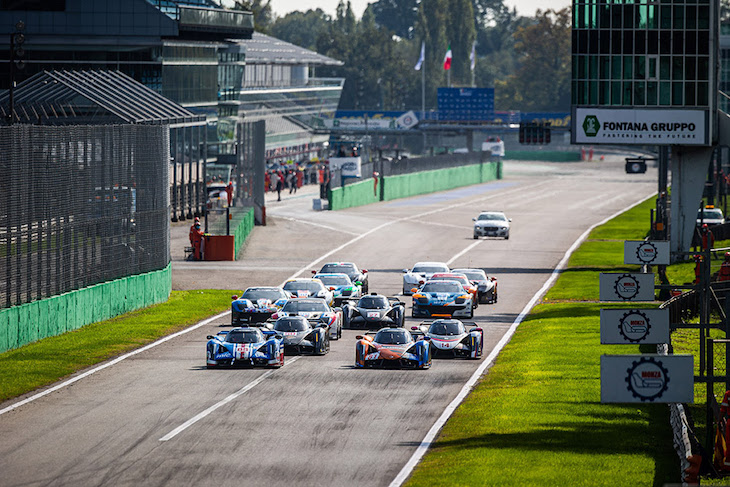 In the sports prototypes, the battle lines were drawn right from the start between the pole winner, Italy’s Federico Leo in the #88 Monza Garage entry, and fellow row one starter, Belgium’s Kévin Balthazar in the #81 Milo Racing JS P4. While Kévin Balthazar jumped into the lead at the start, he was under attack from Federico Leo. The two swapped the lead of the race just until the pit stops. The two other JS P4s, the #50 from HP Racing Team with Andrea Dromedari and the #14 MV2S Racing with Alex Marchois fought it out for third place. The gaps were small and the four cars were often separated by less than a second. 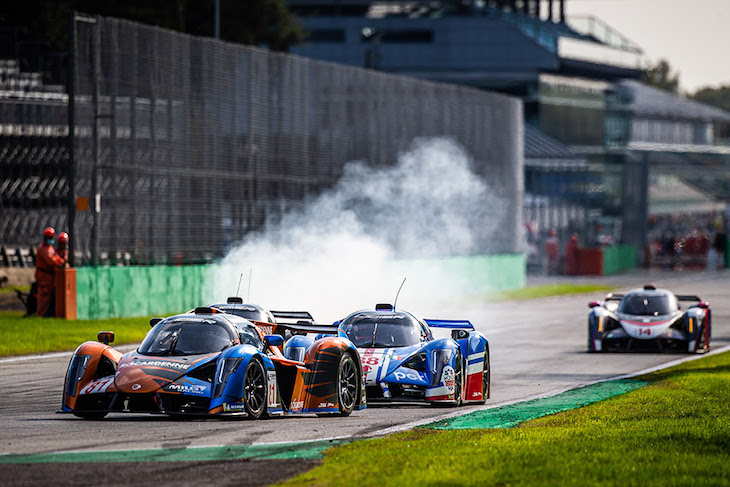 The Ligier JS P4s were the last to come in for the mandatory stop. John Corbett replaced Federico Leo in the #88 and Franck Marchois took over in the #14 car. Following the pits stops, Kévin Balthazar in the #81 of Milo Racing was the race leader and Andrea Dromedari in the #50 overtook John Corbett in the #88 on lap 18. HP Racing Team was on its level-best form during the stops, keeping the #50 car stationary in the pit for just 0.077s more than the mandatory minimum of 1:20.00s. 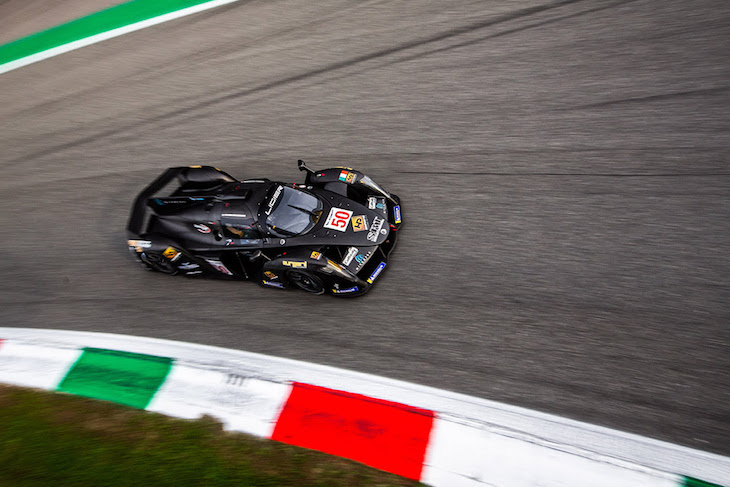 The safety car intervened, following the crash of the #45 JS2 R. The driver managed to walk away and the top 3 positions were frozen at 3:35pm, despite the resumption of the race a few minutes from the finish. Kévin Balthazar now has four victories in the series. An incident for the #14 MV2S Racing car denied the Marchois father and son duo fourth place, which was inherited by the Ferguson brothers in the #27 Raw Motorsport JS P4. 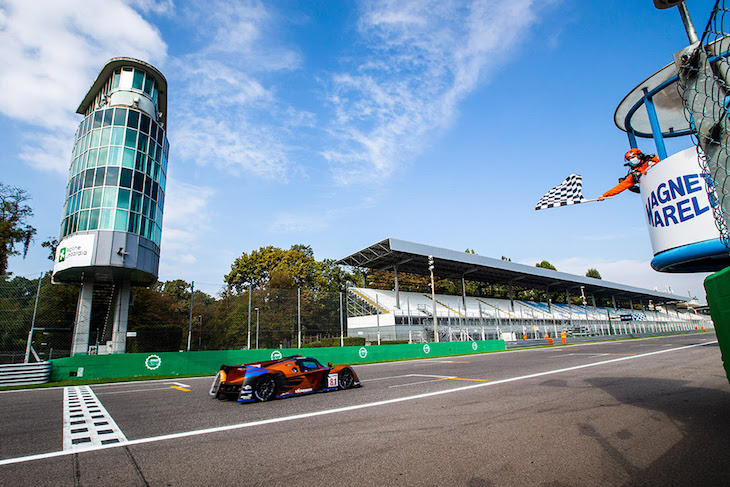 The action was very much on the boil as well in the JS2 R category. Right from the green flag, Sébastien Baud in the #74 Cool Racing entry, who was keen to get some revenge after race one, took the lead from Mathieu Martins in the #86 M Racing, who had edged him out for the pole. Natan Bihel in the #66 sister car made a lightening quick start and on lap one was already up to third place, ahead of the #30 CD Sport car driven by Baptiste Berthelot. Laurent Millara in the #69 M Racing JS2 R was in fifth place. 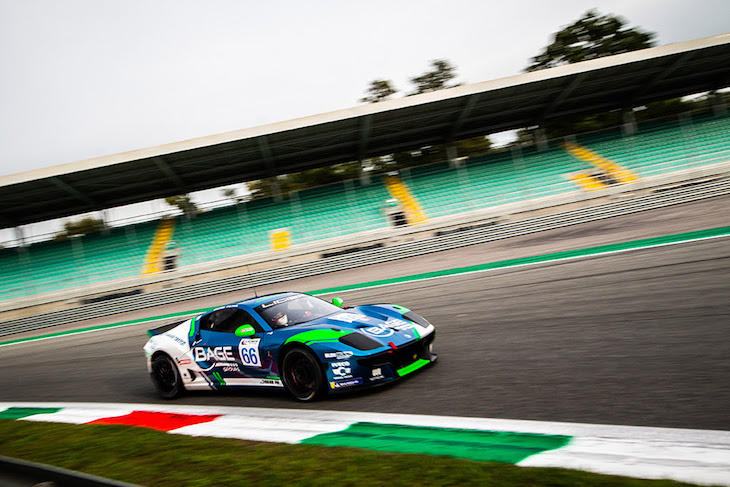 While the positions behind the two leading cars seemed set, Mathieu Martins re-took the lead on lap four, only to cede the position to Sébastien Baud on lap 11. And so, it went just until the pit stops that brought a change to the general classification.

Natan Bihel in the #66 M Racing entry moved ahead of Sébastien Baud in the #74 Cool Racing JS2 R for the lead. The #30 CD Sport of Claude Dégremont was in third place ahead of Laurent Millara in the #69 car. But this just wasn’t the weekend Sébastien Baud and his Cool Racing team had imagined. 20 minutes before the end of the race the #74 suffered a broken transmission that sent it off-track and out of the race and not classified. 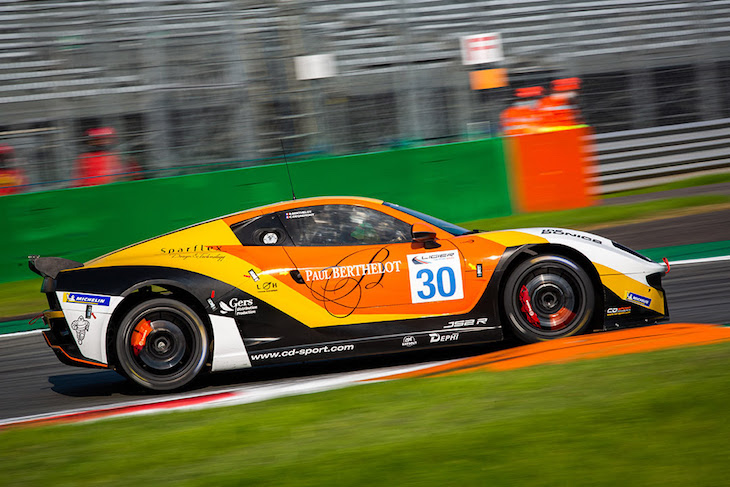 The top three was now the #66, #30 and the #86 of Mathieu Martins who returned to the pointy end of the order. Another accident provoked the intervention of the safety car in the final 15 minutes of the race. The driver of the #45 MV2S Racing machine, Mikhaïl Makarovskii was taken to the Medical Center, but was later released with a clean bill of health.

The race resumed with less than five minutes remaining, the gaps were smaller, but the incidents kept coming. Mathieu Martins who had just moved up to second place brutally dropped down the standings due to a fuel lift. He finished seventh in the category. This assured a well-deserved second place after a great race for the duo of Dégremont and Berthelot in the #30 of CD Sport car.

Hervé Roger and Fabien Michal in the #38 HRC took the chequered flag in third place after an error-free race. The #32 Sub5zero Motorsports entry of Ritzi and Di Persia finished fourth in its first appearance in the series. The #69 M Racing car and driver Laurent Millara finished fifth in the category, ahead of the #46 of the pair of Chapus and Essart. 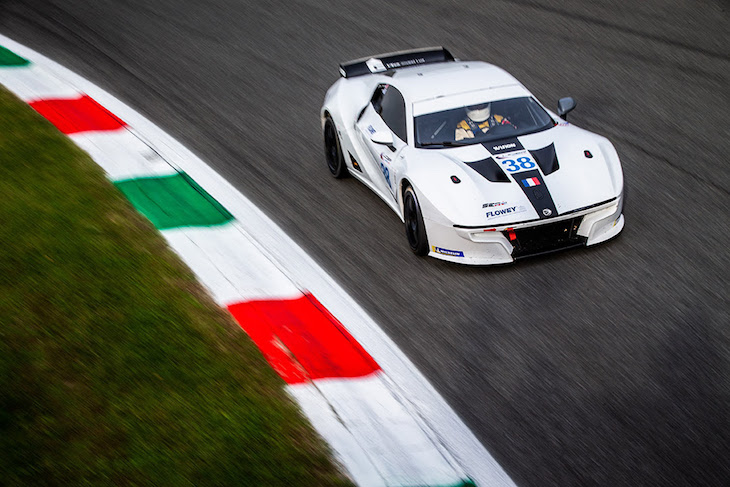 The race for the title in both categories is still undecided after Heat 4 of the Ligier European Series. And it will be determined in the season finale at Portimão on October 30th and 31st!