Competing as a one-off entrant in this weekend’s second round of the 2020 Pirelli Super Taikyu Series, the #16 Porsche Center Okazaki 911 GT3-R of Hiroaki Nagai and Yuta Kamimura drove to the overall and ST-X (FIA GT3) class victory in Sunday’s Sugo 3 Hours Group 1 Race.

Rain was a constant throughout the weekend at Sugo, with Saturday’s qualifying session for this race being cancelled due to dense fog. Under the regulations, the field was set based on the results of the previous round, the Fuji Super TEC 24 Hours. That put Team Hirix Racing’s #888 Mercedes-AMG GT3 on pole position in a strong 28-car grid.

Immediately, it was evident that the bright red #16 Porsche had the pace to win. Kamimura, from 5th on the grid, overtook his way up to 2nd place and right onto the tail of polesitter Shinichi Takagi in the #888 Hirix AMG GT3. But Kamimura spun off at Rainbow Corner (Turn 8), dropping him through the field, and securing Takagi’s advantage up front.

From there, the two-time and defending GT300 Champion in Super GT would pull out a gap over the field in his yellow and green Mercedes. But as the rain showers stopped, Tomonobu Fujii in the #777 D’station Aston Martin AMR Vantage GT3 began to close in on Takagi. At the 40 minute mark, Takagi and Fujii were running tail-to-nose. On Lap 39, Takagi made a rare mistake and ran wide at the Final Corner, letting Fujii through to the lead. Both drivers were near the end of their stint, and pitted at the end of Lap 43. Gentleman drivers took over in both cars, Satoshi Hoshino in the #777 Aston Martin, Daisuke Yamawaki in the #888 Mercedes. 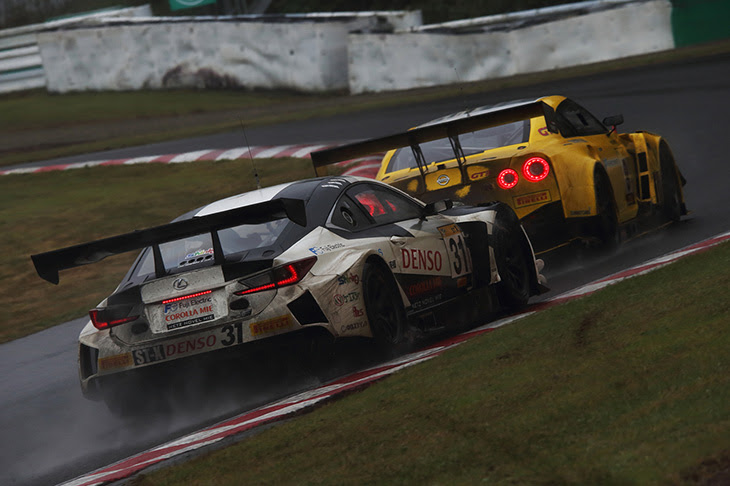 That sent the #9 MP Racing Nissan GT-R GT3 of Yusaku Shibata, the sole Nissan GT-R in the field after GTNET Motor Sports withdrew from the weekend, to the lead. The Asian Le Mans Series and GT300 standout would put in a mega 54 lap stint of his own, before handing off to the ageless Masami Kageyama for a short 2nd stint. The #9 MP Racing GT-R had trouble getting the engine fired coming out of the pits.

After the first round of pit stops, the #16 Porsche was back in the lead: Kamimura had caught up to the rest of the ST-X pack, and Porsche Center Okazaki pitted on Lap 31 for their first driver change to Hiroaki Nagai. Yamawaki ran 2nd, Kageyama 3rd, and Koki Saga was 4th in the #31 Denso Lexus RC F GT3.

Saga made a charge from 4th to 2nd and closed up to the back of his Super GT stablemate Nagai. Then it was Kageyama’s turn to make a run at the lead, on Lap 66, the 1998 GT500 Champion passed Saga for 2nd at Horseback Corner (Turn 9), then overtook Nagai for the lead going into the First Corner on Lap 67.

Nagai pitted for the second time on Lap 68, and Kamimura took over for the last stint. At the same time, Kageyama came up to the back of a slow-moving #2 KTM X-Bow GT4 coming out of the last corner, allowing Saga a window to take the lead back. Unfortunately, the #777 D’station Vantage GT3 went to the garage due to damage after colliding with a backmarker. The trio of Hoshino, Fujii, and Tsubasa Kondo were able to get the car to the finish, but they ended up 29 laps off the lead. 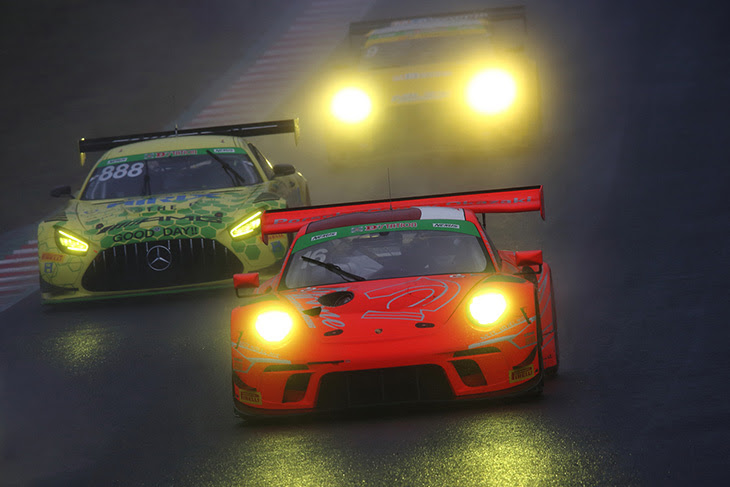 Yamawaki pitted on Lap 73, relieved by Shaun Thong, and Kamimura emerged with a lead of 13 seconds – and maintained that advantage for the remainder of his 40-lap closing stint to secure the victory, completing 108 laps in total and winning with a final margin of victory of 12.681 seconds.

Back in 2017, Hiroaki Nagai and ARN Racing became the ST-X Class Champions, but decided in 2018 to move their efforts to the GT World Challenge Asia Series, where Nagai and Kamimura have been a regularly competitive duo ever since. ARN Racing with Porsche Center Okazaki were meant to enter the 2020 GTWCA season, before the season was eventually cancelled – allowing for this crew to make what is effectively a one-off return to Super Taikyu, in winning fashion.

Kamimura said after the race, “I got a good start and caught up pretty well on the first lap, but when I tried to take the lead, I spun off at the Rainbow Corner, so I’m glad we were able to come back and win. I was able to reel it back in and win the race, so I’m very happy.”

“Nagai drove a great stint, so I was able to drive with a lot of confidence at the end. I’ve won Super Taikyu races before, but this was my first ST-X class win.”

“The amount of rainfall was constantly changing, so I couldn’t take it easy, and this was the most nervous I’ve been all year! I kept thinking about mental control and how I was going to keep my composure for the last hour. I managed to protect the lead, which is good. I wasn’t worried about the Pirelli tyres, or this car, so I’m very thankful to the team.” 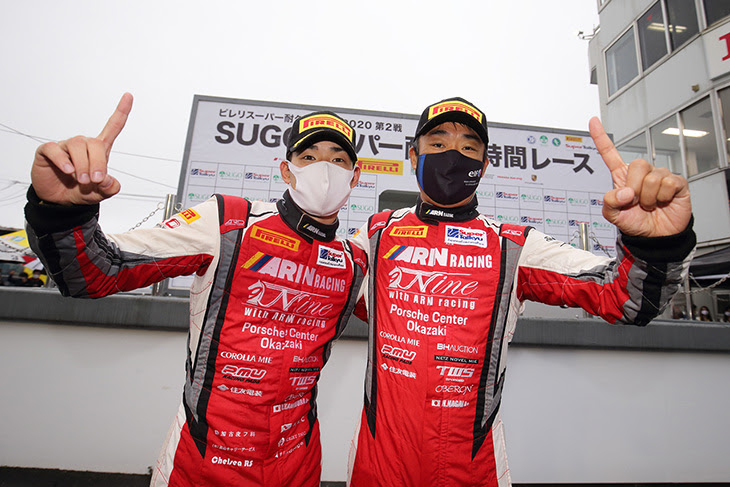 The #888 Hirix AMG GT3 of Yamawaki, Takagi, and Thong followed up a debut victory in the Fuji 24 Hours with a second-place finish – and in far less dramatic fashion than at Fuji. They maintain the lead in the ST-X Championship standings.

The battle for the final podium place was settled amongst gentleman drivers – Joe Shindo in the #9 MP Racing GT-R, and Hideki Nagai (younger brother of Hiroaki) in the #31 Denso RC F GT3. Despite the younger Nagai’s pressure over the last laps, Shindo was able to hold him off – and the #9 MP Racing GT-R of Shindo, Shibata, and Kageyama held onto third place by just 0.874 seconds, leaving the #31 Denso RC F GT3 of Nagai, Saga, and Kazuto Kotaka to finish 4th.

5th place overall, and winners of the ST-Z Class for the second time in 2020, was the #3 Endless Sports Mercedes-AMG GT4 of Yuudai Uchida, Hideki Yamauchi, and Tsubasa Takahashi. They drove a flawless race in their group, and won their class by 10.4 seconds.

Floral Racing with Uematsu, a new team in the ST-TCR class, took its first class victory with the #290 F-Link Honda Civic Type R TCR of Tadao Uematsu, Yuji Ide, and Shintaro Kawabata – but it was quite the close finish in the end, after an off-track excursion from Kawabata in the final laps left the door ajar for the #22 Waimarama Kizuna Audi RS3 LMS (Kizuna/Katsumasa Chiyo/Riki Okusa). Ultimately, Kawabata held off Okusa by 3.2 seconds. The two cars finished 7th and 8th overall. The #65 Rebellion Mars RS3 LMS (Toshiro Tsukada/Masanobu Kato/Masato Shimoyama) finished 3rd in class, 12th overall.

Finishing 13th overall was the ST-3 class winner, the #39 Air Blaster/Winmax Lexus RC 350 featuring eSports champion turned real-world racer, Yusuke Tomibayashi, joined by co-drivers Kazuya Oshima (not the reigning GT500 Champion of the same name) and Hirotaka Ishii. It’s the first Super Taikyu victory for 24-year-old Tomibayashi, who was the 2016 FIA Gran Turismo Championship Manufacturers’ Cup winner – who seems to be well on his way to emulating the spirit of the Nissan GT Academy of yesteryear.

The Pirelli Super Taikyu Series returns in three weeks’ time, for another double-header of three-hour races at Okayama International Circuit on 31 October & 1 November.