Inter Europol’s overnight dash to bring the team’s second Ligier JS P217 chassis from their workshop in Germany has been successful. The car, last seen in the Asian Le Mans Series earlier this year, arrived at the circuit at 1 am and, by the time the DSC crew arrived this morning, was about to be taken to scrutineering.

The replacement chassis was necessary after an incident in FP2 for Matevos Isaakyan who ran wide at T7, the car running over the kerbs and snapping right to hit the barriers, the impact on the rear damaging the rear left suspension pick-up.   The replacement chassis last raced in the Asian Le Mans Series in February. The #34 will start the race from the back of the 15 car LMP2 grid.

Inter Europol have switched drivers in the #13 Ligier P3 car for this race, after testing with Dino Lunardi in FP1 the French driver is confirmed here alongside Martin Hippe, Nigel Moore has returned to the UK.

Despite the weather forecasts predicting heavy rain for race day here at Monza the skies have cleared, and the current forecast is for a dry race, after 20 degree early autumn balminess all week.

One thing to look out for though might be any effect of leaf fall on the cars, DSC’s David Lord has noted that even after short runs some of the cars, in particular the GTs, are sporting quite a collection of leaves in their air intakes!

JMW Motorsport has unveiled a new partnership from this weekend with Omologato Watches, the team’s three drivers and Team Manager Steve Hagger all sporting the highly appropriate Omologato Maranello this morning! 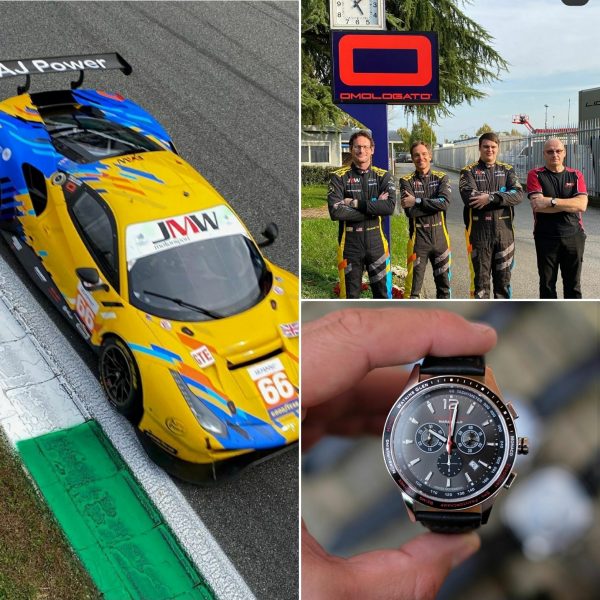