An incident-packed 2-hour race in Monza, with three safety car and one full course yellow, eventually saw the #3 DKR Engineering Duqueine take the victory ahead of the #37 Cool Racing Ligier after an excellent near race-long battle.

Starting from the front of the grid Nicolas Maulini in the #37 Cool Racing Ligier led the field into the first corner followed by the #21 Mühlner Motorsport Duqueine of Alex Kapadia and the #3 DKR Engineering Duqueine of Jean Glorieux.

Kapadia’s car dropped back on the opening lap after contact from another LMP3 car caused a puncture, coming into the pits to replace a wheel before re-joining at the back of the 24 car field.

At the front Maulini and Glorieux were just 1.5 seconds apart, with the #3 Duqueine also being challenged by the #26 Graff Ligier of Rory Penttinen and the #69 Cool Racing Ligier started by Round 3 winner Maurice Smith.

The #98 Motorsport98 Ligier of Eric De Doncker got a good start – too good! The Belgian driver was judged to have jumped the start lights and had to serve a drive through penalty on lap 6.

The #75 Idec Sport Ligier of Patrice Lafargue slid off the track at T5 into the gravel, bringing out the first safety car to recover the car and put it back on track. After nine minutes the race went back to green but only for three minutes.

The safety car was deployed again when the #11 Racing Experience Duqueine of Nicolas Melin spun at T1 and while trying to recover, the French driver’s car stuck on the kerbs and with the rear wheels spinning uselessly the safety car came back out to close everyone up again.

They say things come in threes, and for this race it was safety cars. Just two minutes after the green flag was waved the #75 Idec Sport Ligier got onto the kerbs at T10, the lapped car in the midst of the leading group, Lafargue spinning across the track into the barriers. A wheel and suspension detached from the car hitting the #23 United Autosports Ligier and the #27 MV2S racing Ligier, with the #5 CD Sport Ligier spinning off and hitting the barriers in avoidance, pitting for lengthy attention soon afterwards

The safety car was out for a further 8 minutes to allow the marshals to clear the remains of the IDEC Ligier and the debris on the track so that racing could resume.

After just five minutes the race went back to green with Maulini and Glorieux continuing their battle for the lead, with Pentinnen keeping in touch with the two leaders, the top 3 split by less than two seconds as the pitstops approached.

Thanks in part to the two Safety Cars, but helped by sustained pace and decisiveness in traffic, Alex Kapadia had managed to bring the Mühlner Motorsport Duqueine up to sixth, setting the fastest lap of the race up to that point before pitting to hand over the car to Moritz Kranz.

Unfortunately, the German’s race only lasted one lap, pulling the car off the track at T7 with an issue with the rear right of the car. A Full Course Yellow period was declared to get the car into a safe position. 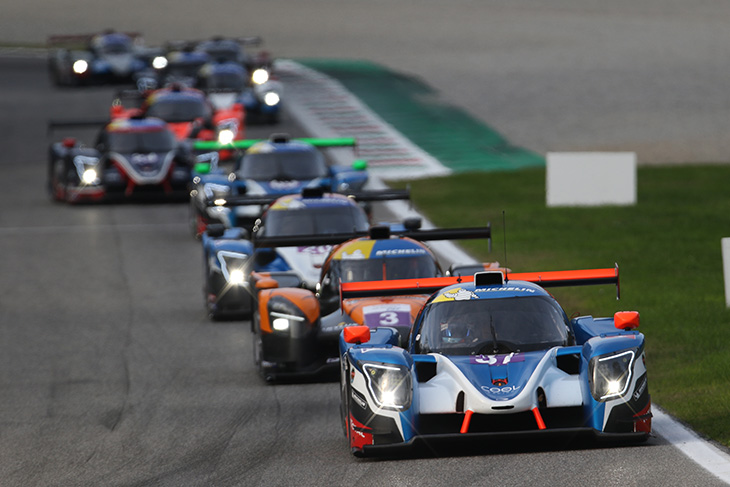 Hörr closed the gap to Cauhaupe and for several laps challenged the French driver for the lead in a clean and fair fight. Eventually, the #3 Duqueine got a good run into T4 and Hörr swept into the lead.

As the final fuel stops approached it looked like the top three places were set. However, fate decided otherwise for Matt Bell as the British driver lost over a minute in the pits, dropping the #69 Ligier down the order and promoting the#26 Graff Ligier of Matthias Kaiser into third spot. 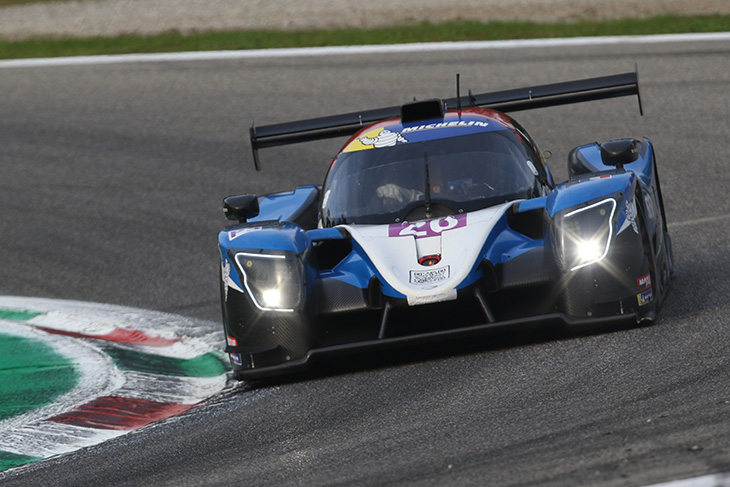 Laurents Hörr, Jean Glorieux and DKR Engineering head to the final race of the season at Portimão with a 25-point advantage over the #37 Cool Racing crew, and needing just one more point to take the team and drivers titles, a potential fourth successive title for the team!

After starting from the back of the grid following a penalty incurred during qualifying, the #2 Pzoberer Zürichsee by TFT Porsche of Nicolas Leutwiler and Julien Andlauer battled its way to the front of the field to secure their second victory of the 2020 Michelin Le Mans Cup ahead of the #9 Iron Lynx Ferrari of Emanuele Maria Tabacchi and Niccolò Schirò, drafted in to replace the absent Deborah Mayer. 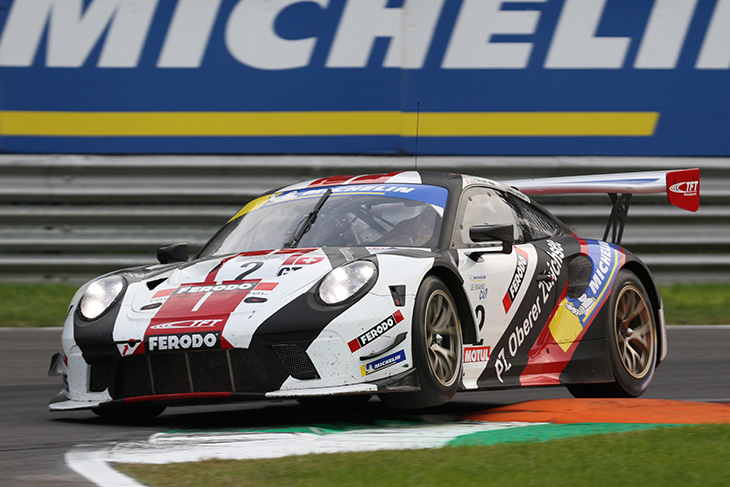 The #8 Iron Lynx Ferrari of championship leader Rino Mastronardi and his teammate Giacomo Piccini finished in third place and ahead of their nearest rival to secure the 2020 MLMC Team and Drivers titles and also the automatic invitation to the 2021 24 Hours of Le Mans.

At the start of the race Rino Mastronardi led the GT3 field into the first corner with the #70 Optimum Motorsport McLaren 720S GT3 of Brendan Iribe up to second place from fourth on the grid though the team would struggle thereafter, feeling strongly that the BoP for the McLaren was way off!

The #74 Kessel Racing Ferrari of Michael Broniszewski had dropped back but the Polish driver started to forge back up to the front of the field and by lap two had moved into the lead, with Iribe’s McLaren in second and Mastronardi down to third.

Mastronardi and Iribe were fighting for the minor podium positions over the next few laps and the no8 Ferrari moved up on lap 5 just before the first safety car came out to remove the #75 Idec Sport Ligier from the gravel at T5.

Two more safety car periods followed in quick succession and at the restart Broniszewski and Mastronardi were battling for the GT3 lead, with the Italian making his move at T4/T5 to take the lead just as the #74 Kessel Racing Ferrari was given a drive through for not respecting the safety car procedures.

Broniszewski brought the Ferrari into the pitlane to serve the penalty as Nicolas Leutwiler took the second-place position in the #2 Porsche and set off after Mastronardi’s leading white Ferrari.

After the pitstops and a short Full Course Yellow to recover the #21 Mühlner Motorsport Duqueine which had stopped on the side of the track at T7, the #9 Iron Lynx Ferrari of Niccolò Schirò had taken the lead, with Julien Andlauer in the Porsche in second and the #8 Iron Lynx Ferrari in third. 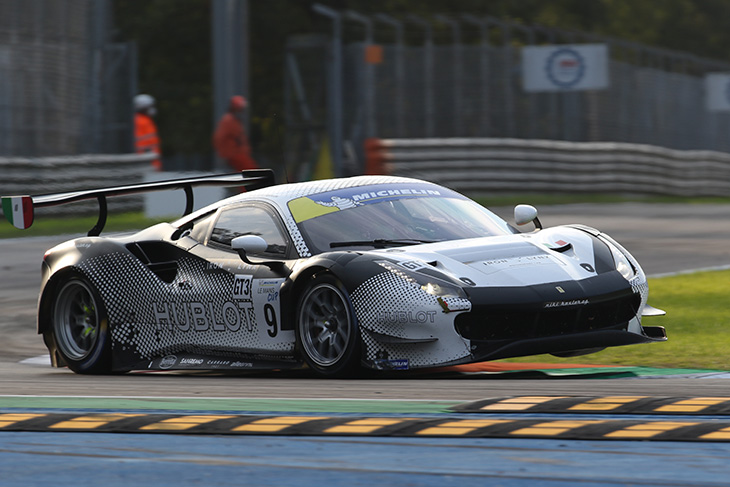 Andlauer closed the gap to the lead Ferrari and the French driver started to look for a way past the very wide Italian in the lead. For lap after lap Andlauer challenged and Schirò defended but with 30 minutes left on the clock the Porsche got alongside the Ferrari on the run out of Parabolica and on the long run into T1 Andlauer held his line and swept into the lead.

Behind the battling pair, the #8 Iron Lynx Ferrari was on course to gain enough points to secure the championship and Giacomo Piccini brought the car home in third spot to claim the team title an automatic 2021 Le Mans 24 Hours entry for Iron Lynx and the drivers crown for his teammate Rino Mastronardi. 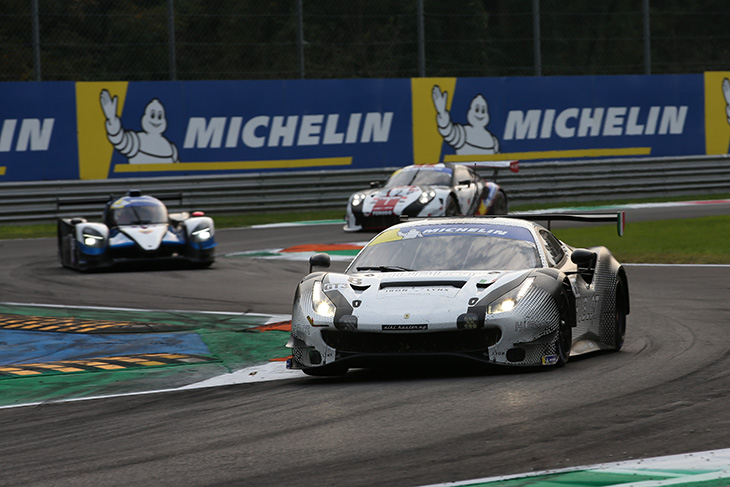 The #74 Kessel Racing Ferrari of David Perel was fourth.