Louis Prette and Vincent Abril took their fourth win of the season, at the wheel of the AF Corse APM Monaco Ferrari 488, re-launching their championship chances, as they reduced the gap to championship leaders, Miguel Ramos-Henrique Chaves (TMM McLaren) to just a single point. 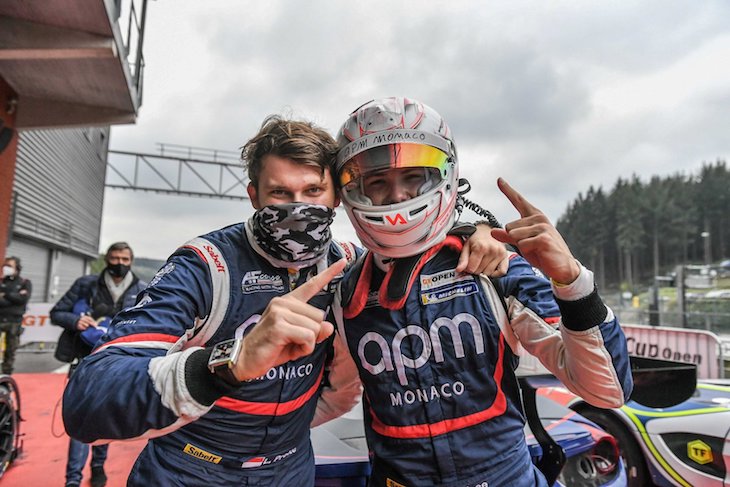 “It was a strong race”, said the Monegasque duo, “but everything went well once we could unlock ourselves”. Prette was stuck in P4 during the initial stint, while in the second part of the race, Abril passed the Team Lazarus Bentley of Yannick Mettler, which had led the first stint with Crestani, under constant threat from the other AF Corse Ferrari of Stéphane Ortelli. The Swiss-Italian pair finished an excellent second ahead of the guesting Oman Racing with TF Sport Aston Martin of Ahmad Al Harthy and Tom Canning, who took third and won in Pro-Am on its debut.

Brendan Iribe-Ollie Millroy (Optimum Motorsport McLaren) and Valentin Pierburg-Nicholas Foster (SPS Automotive Mercedes) completed the Pro-Am podium (after the former were reinstated in P2 following the contact with the latter in the last corner), while Jens Liebhauser-Florian Scholze (GetSpeed Performance Mercedes) won for the seventh time in Am.

At the start, Fabrizio Crestani kept the lead while Ortelli and Millroy stole second and third with a great first lap, ahead of Canning, Ramos, Yoluc and Hahn. The gaps did not stretch much, with the first five covered by 8 seconds after six laps, while Ortelli posted the fastest lap in 2.17.318.

At the top, things rapidly got interesting, as Ortelli caught Crestani and started to pressure him, although the lapping of Cup cars gave the Bentley some breathing space. Behind the first seven, Liebhauser was now eighth, leading in Am ahead of various Pro-Am cars.

On lap 12, the driver change window opened, with Yoluc, Hahn, Krupinski and Pierburg the first group to stop; one lap later, the leader pitted, while Ortelli inherited the lead and continued his charge, although his form was dented a little with a 3-second penalty for having exceeded track limits repeatedly in turn 4.

The attention though shifted to the battle for the virtual lead, as Mettler and Abril were together after the pit stops and the Monegasque got by the Swiss around the outside at La Source at the beginning of lap 18.

After all of the pit stops, Iribe led with the Optimum Motorsport McLaren, 5 seconds up on Abril, 8 on Mettler, 11 on Al-Harthy, then Negro, Chaves, Eastwood and Foster. Abril took the lead on lap 21 at Les Combes.

On lap 22, Mettler took second from Iribe, who also dropped behind Al-Harthy and Chaves, with the Portuguese passing Al-Harthy soon after, but on the last lap, the Omani retook third.

Leutwiler did not take the start, and the entry also missed a pair of cars eliminated in significant shunts in Free Practice, the  AKM Motorsport Mercedes (Nesov at Raidillon) and the Team Lazarus Bentley (Varrone at Blanchimont).