Robby Foley and Vincent Barletta in the #96 Turner Motorsports BMW M4 GT4 won the Michelin Pilot Challenge race from Road Atlanta. It was a race that was heavily impacted by Full Course Yellows that broke up the action. In the two-hour race, one hour and eight minutes were spent behind the safety car and the longest green-flag run was just twenty-four minutes long.

Of the last forty-five minutes of racing, just ten minutes were spent under green, leaving little opportunity for cars to move up the order. The BMW M4 was strong throughout the race and Foley fended off Greg Liefooghe in the #82 BimmerWorld BMW M4 GT for the race win. Liefoogh finished just 0.794 seconds behind Foley giving himself and teammate James Clay a second-place finish.

The drive of the day came from the #71 Rebel Rock Racing Chevrolet Camaro GT4. This car won last time out at Road Atlanta earlier in the year and showed why today. After having to start the race at the back of the Grand Sport field due to a mechanical failure in qualifying, Frank DePew and Robin Liddell drove through the field.

Liddell, in particular, showed incredible pace in the second half and likely could have challenged for the win had the second half of the race not been interrupted so frequently by Full Course Yellows.

Two Mercedes-AMG GT4s rounded out the top five with the #56 Murillo Racing entry of Eric Foss and Jeff Mosing ending the day in fourth. The #4 Winward Racing Mercedes-AMG of Nico Bastian and Russell Ward were fifth.

This race could be the one that determines the championship in GS. The #39 Carbahn w/ Peregrine Racing Audi R8 GT4, which was seven points out of the lead of the championship, did not finish the race after failing to meet minimum drive time. Tyler McQuarrie started the car and the team did not elect to do a drive time during the first round of pitstops.

When it came time to put Jeff Westphal in the car, a Full Course Yellow came out that closed pitlane, leaving McQuarrie stranded on track as the minutes Westphal needed to meet minimum drive time trickled away. The team did complete a driver change but after determining they would have no way of meeting the drive time requirements, the car was retired.

The most significant incident involving a GS car came early in the race when the #7 Archangel Motorsports Aston Martin spun on the exit of Turn 10B. Alan Brynjolfsson hit the tyre barrier at the base of the Fox Factory bridge which sent a tyre into the path of the #22 Multimatic Motorsports Ford Mustang.

The #22 Mustang could do nothing to avoid the tyre and ran into it which caused damage to the right front of the Ford. The #22 Mustang finished eighteenth in class, three laps down. The #7 Aston Martin did not finish the race and was last in class.

In TCR, the race came down to an incredible final-lap back-and-forth battle with the #98 Bryan Herta Autosport Hyundai Veloster N of Mason Filippi and Michael Lewis taking home the win. 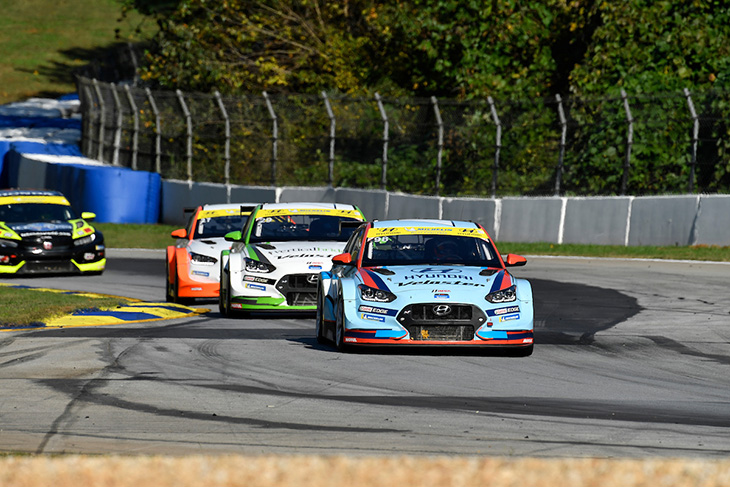 Tyler Maxson and Tyler Gonzalez in the #27 Copeland Motorsports Hyundai Veloster N, a new entry for this race, gave the #98 Hyundai a mighty challenge for the win. Maxson had passed Lewis for the lead of the race but Lewis fought back and fended off Maxson in a nail-biting final lap.

The Bryan Herta Autosport crew dedicated this win to Reese Imhoff, the young son of Paul Imhoff, the Director of Marketing and Communications at Hyundai North America. Reese was diagnosed with a rare form of bone cancer in 2016 and died in 2019. RACER’s Marshall Pruett wrote a great article on Reese and how much he meant to the team earlier in the season. 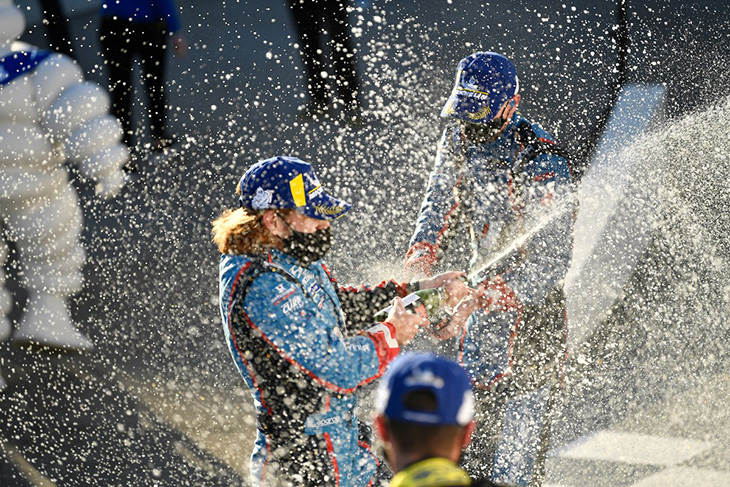 “We dedicate this win to our teammate Reese Imhoff who we lost last year. It was a great victory out there, hard-fought on the track and in the pits.” Lewis said after the race. “The Hyundai’s were so close out there, it was very tight racing. I have to give kudos to our engineer John Ward and the #98 crew, the pitstops were awesome, we raced our team in and out of the pits today…great execution,” Lewis added.